At the very beginning of this summer, they sent me a Motorola Moto G8 for testing, everyone liked the phone, but NFC was not enough for complete happiness. Apparently, other users also asked for a useful feature, and the result was the Moto G9. Moreover, in some markets, in particular, in Russia, Moto G9 will be sold as Moto G9 Play, keep this in mind.

Motorola Moto G8 review: not a cherry "nine", but a white "eight"

Now let's get down to the story!

Let's start with the screen: it's big

The display is large enough for comfortable viewing of videos or games. It has a 6.5-inch diagonal and HD + resolution, uses an IPS-matrix. The screen is bright, there are additional color profiles, if you want to get a slightly embellished picture instead of natural and less saturated colors. 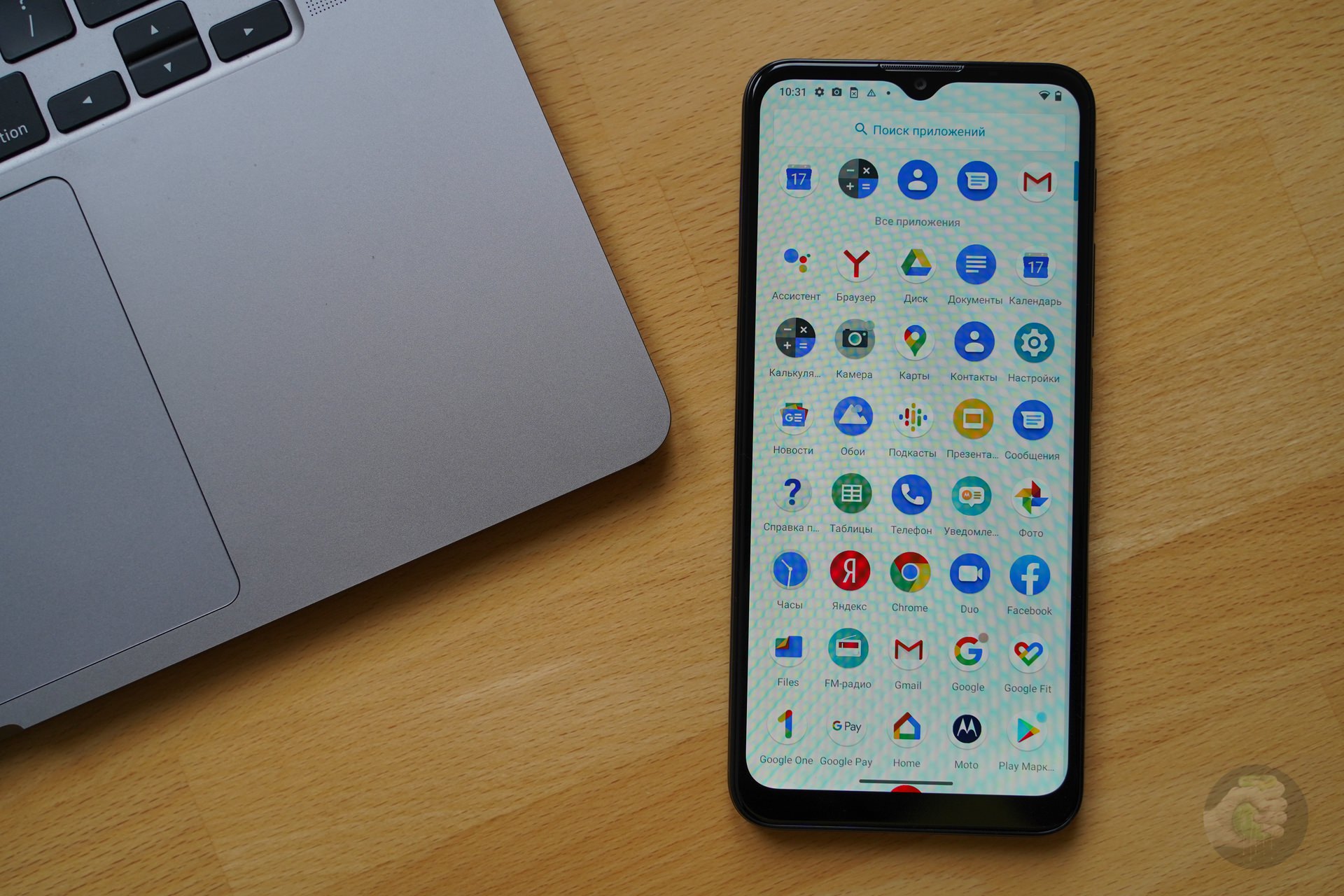 Perhaps you will have questions about the resolution with such a diagonal, but the phone is quite simple and this is normal for a device of this class.

Display without a protective film, keep this in mind, some manufacturers stick the film directly at the factory. The glass has a good oleophobic coating, but small scratches appear quickly, so it is better not to carry the phone in the same pocket with the keys, well, or be puzzled by purchasing a protective glass. I did not find references to the Moto G9 Play on the Corning website, I suspect that Gorilla Glass is not used here. And if I'm wrong, correct it in the comments.

It remains only to highlight the cutout for the front camera in the upper part of the body and a decent-sized indent at the bottom – all the features of an entry-level smartphone. And in the Moto G8, from a design point of view, everything was more interesting: the camera was located in the corner. 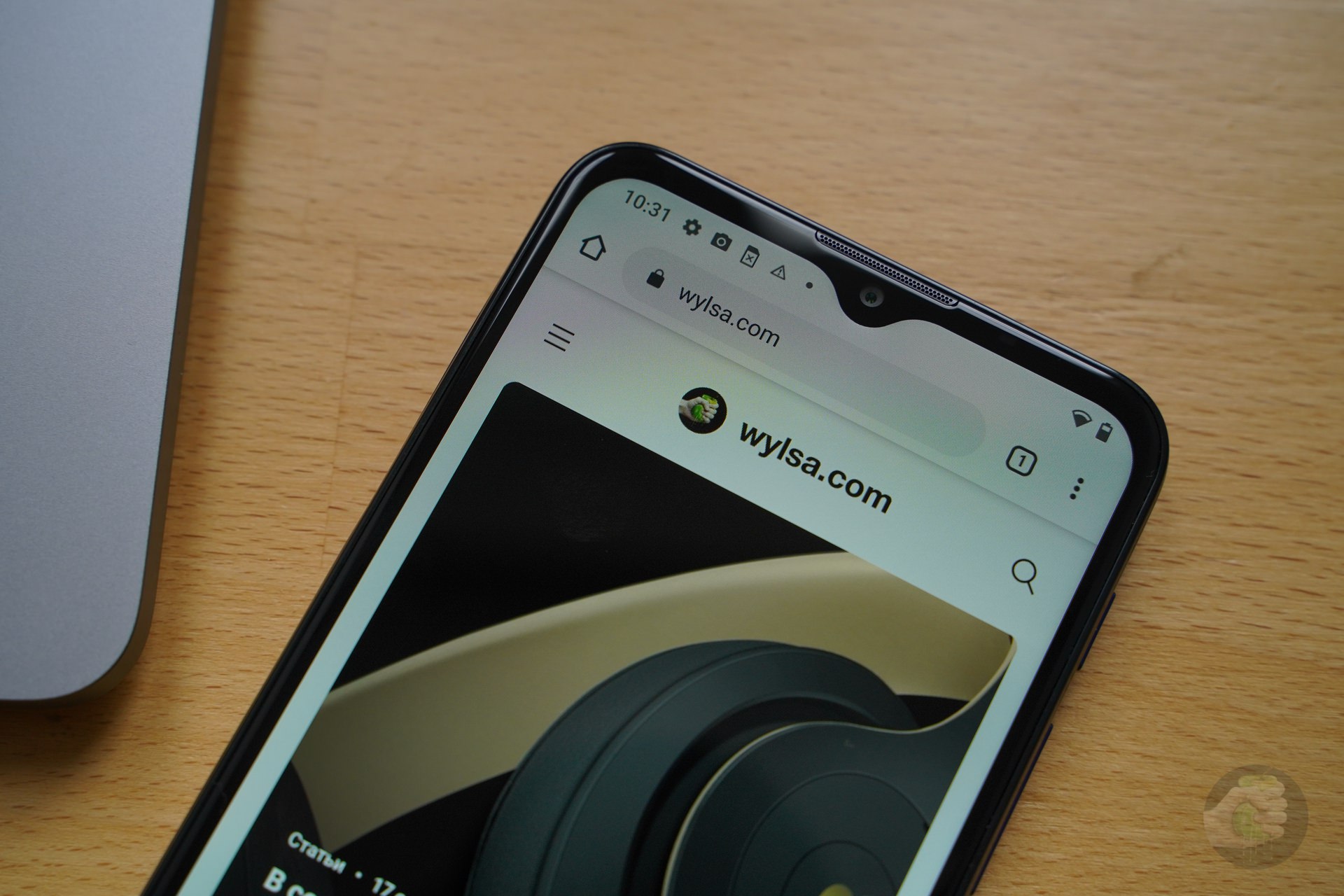 I will not talk about the design for a long time, I will highlight only the main points that I remember. The phone is heavy: in my opinion, not everyone will like a 200-gram bar, especially if you have never used such massive gadgets before. At the same time, the weight can be justified by the fact that the smartphone uses a high-capacity battery. 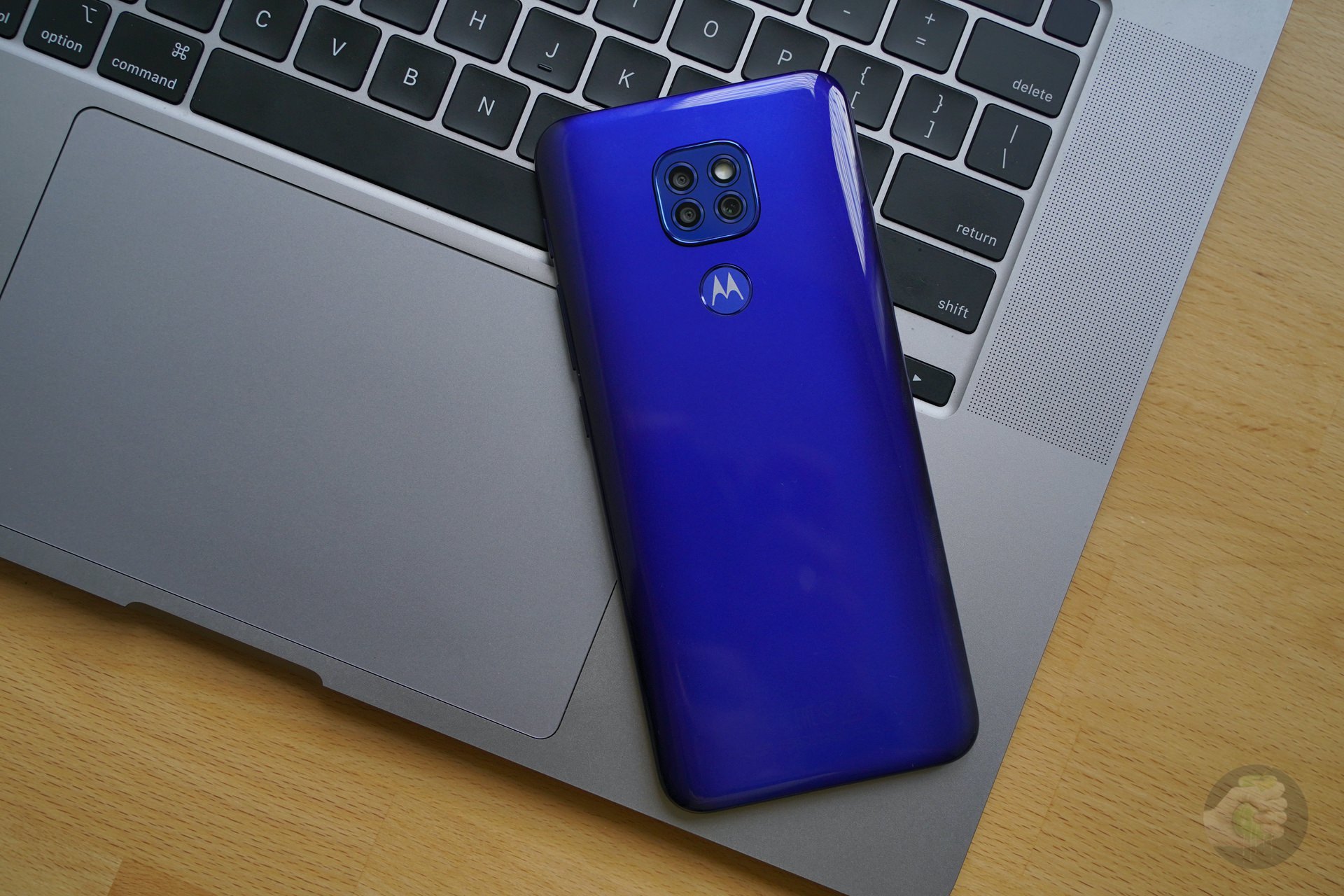 The body is made of plastic, the phone can be either blue or green. In official language, the first color is called "Blue Sapphire", and the second – "Green Forest". The phone is slippery, but if you use the complete case, you can forget about this defect. The case is the most common: silicone, simple, inexpensive, but thanks for that. 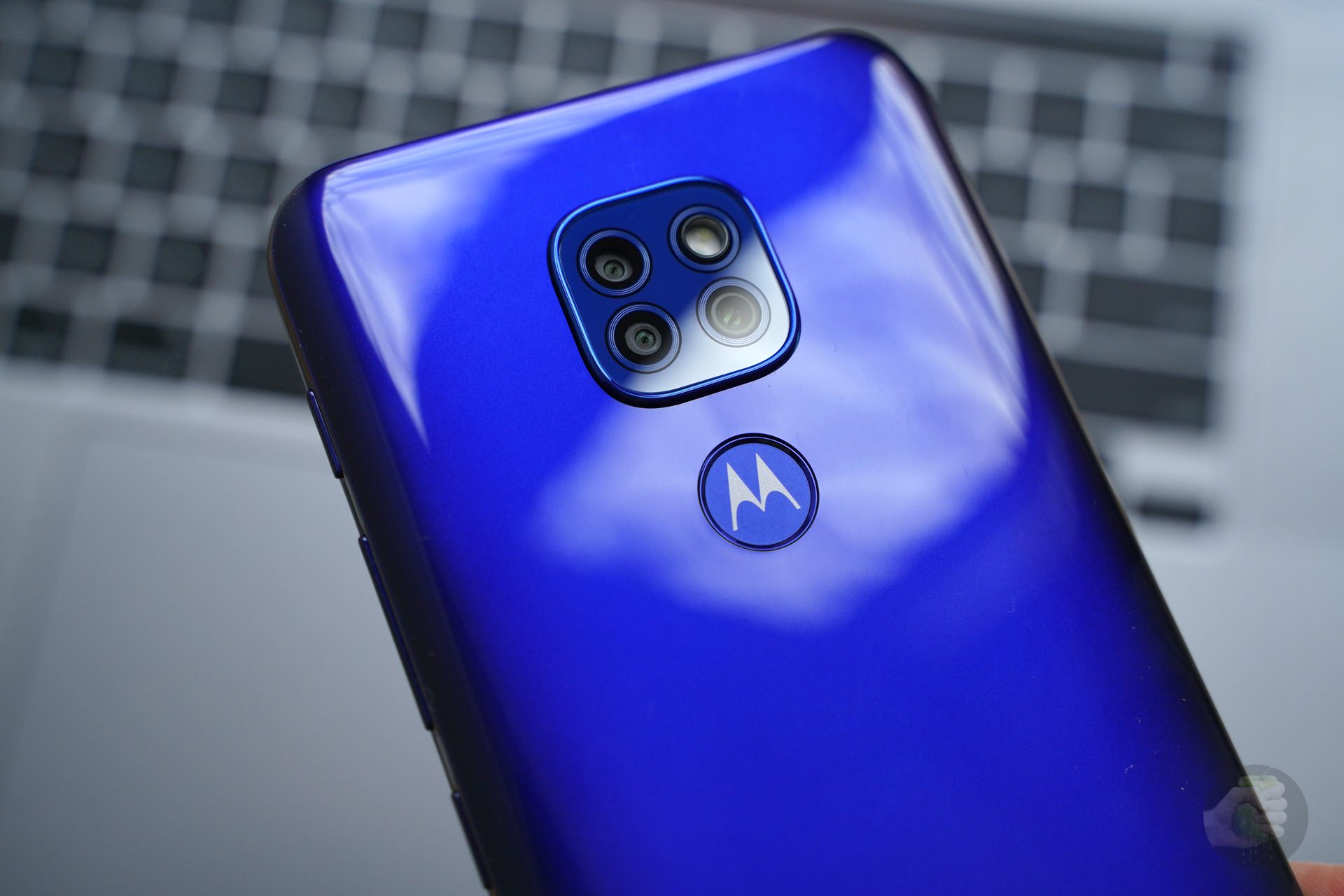 The fingerprint scanner is located on the back and can be identified by the Motorola logo. The response speed is high, the scanner reacts briskly, the finger hits it the first time and without errors. As an add-on, you can activate face unlock, but the method is less reliable.

In terms of ease of use, the Moto G9 Play is not much different from its classmates: the phone is large, rather heavy, but all this is compensated by a large screen and a high-capacity battery. 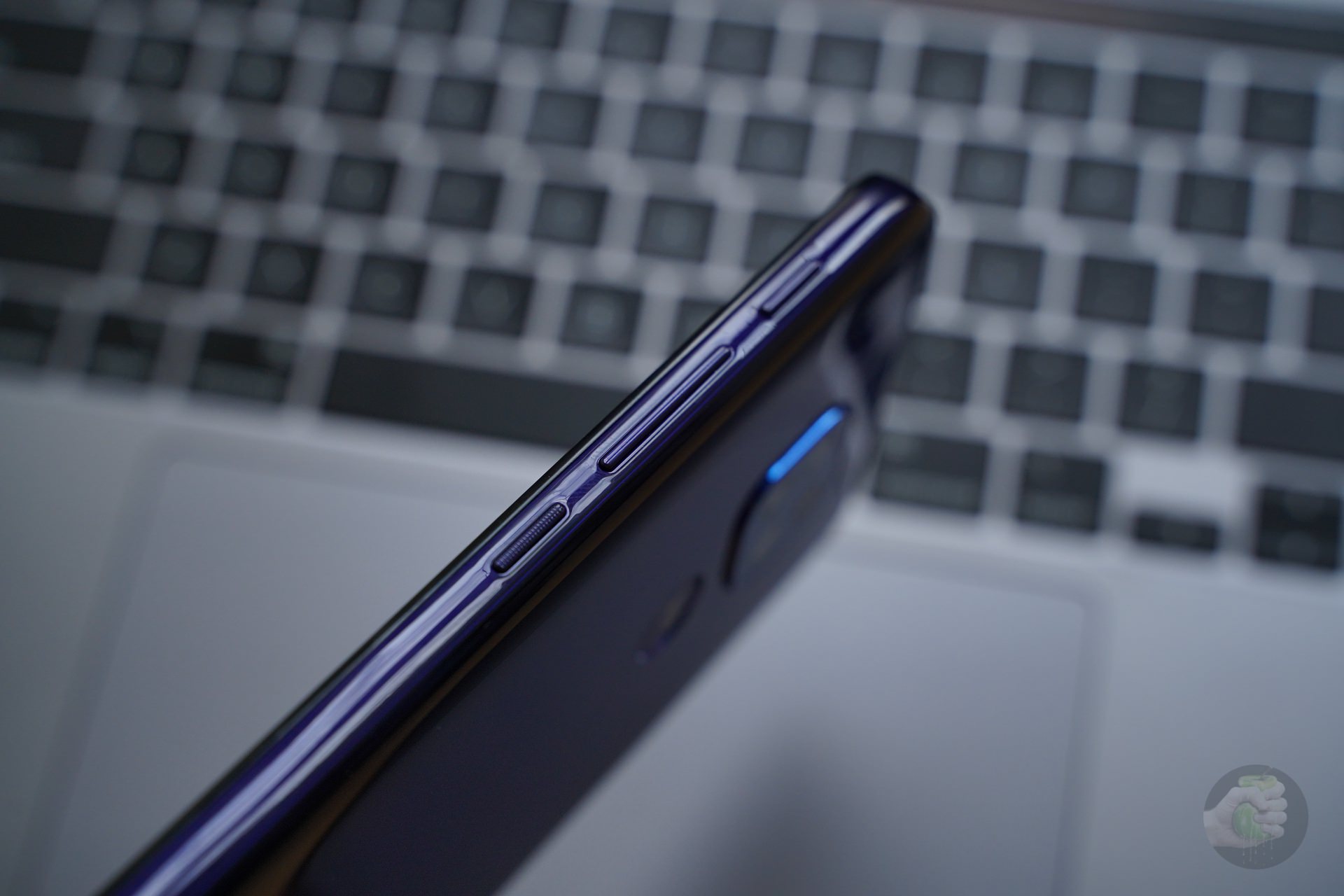 On the right side is a jumble of buttons: a separate key for calling Google Assistant, a volume key and a power key. I would like to remove the call button of the voice assistant on the left side, sometimes you press it by mistake. Alas, you cannot assign it to a different action or choose a different voice assistant.

An entry-level Qualcomm Snapdragon 662 processor with 4 GB of RAM and 64 GB of internal memory, and a separate compartment for microSD. Here are some screenshots for benchmark connoisseurs: 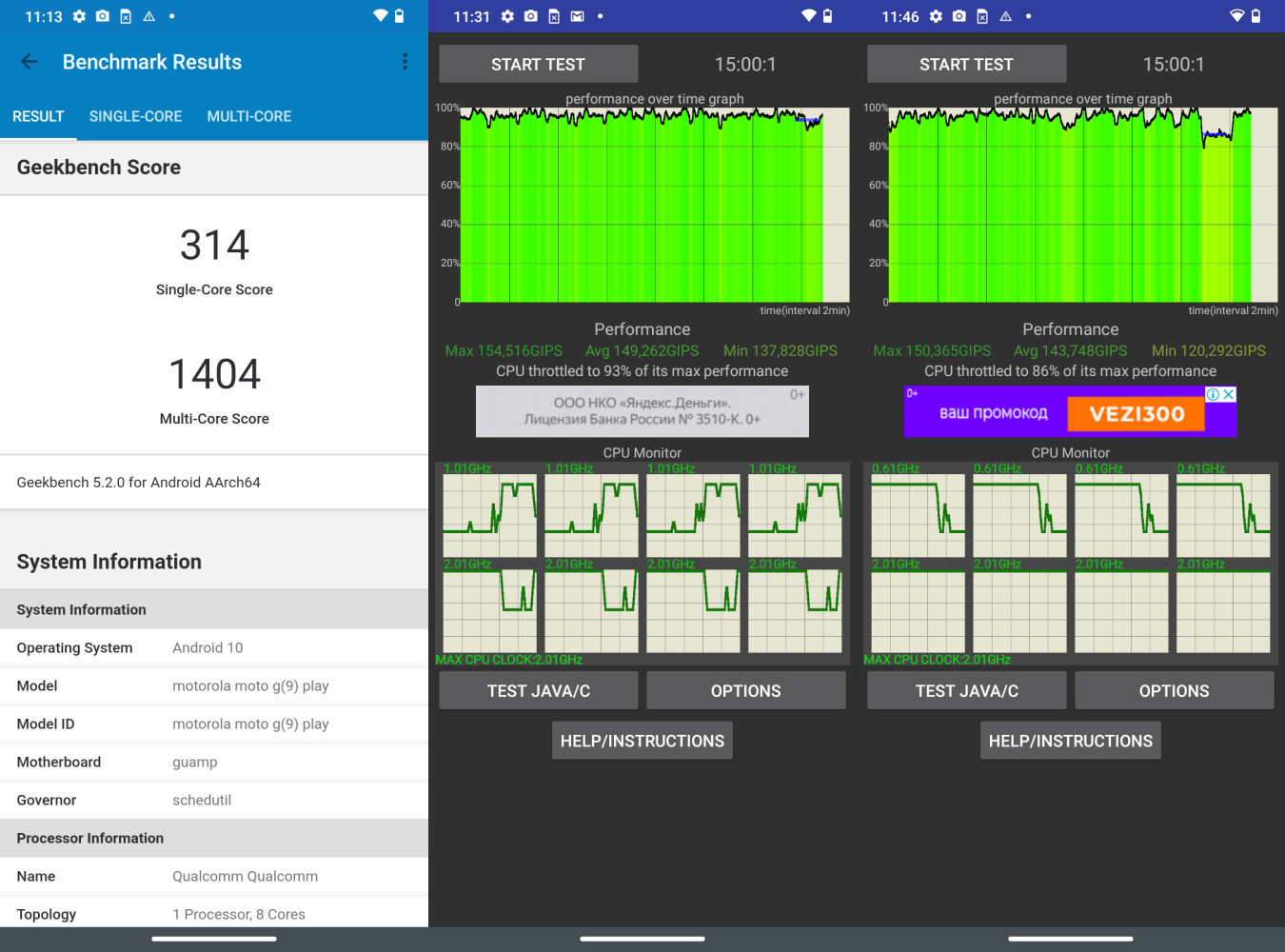 I previously tested the Moto G8 with Snapdragon 665, while the G9 Play has a more recent 662. In fact, this is the same 665, but with the Spectra 340T module: it supports augmented reality, and also helps to take pictures in low light conditions.

As far as practical use is concerned, the phone does not overheat, it works moderately quickly. If you play, then only on medium settings – PUBG runs fine and does not lag much.

The shell is not overloaded with unnecessary details, we get almost "bare" Android with a few pleasant modifications in the Moto style. If you move your hand over the screen, the backlight will go off for a while – a kind of alternative to Always-On, which is energy saving. If you shake the phone in your hand, you can fire up your camera or flashlight.

It uses the new My UX shell, it features useful tricks like customizable animation of the fingerprint scanner, creating themes or customizing icons in the menu. 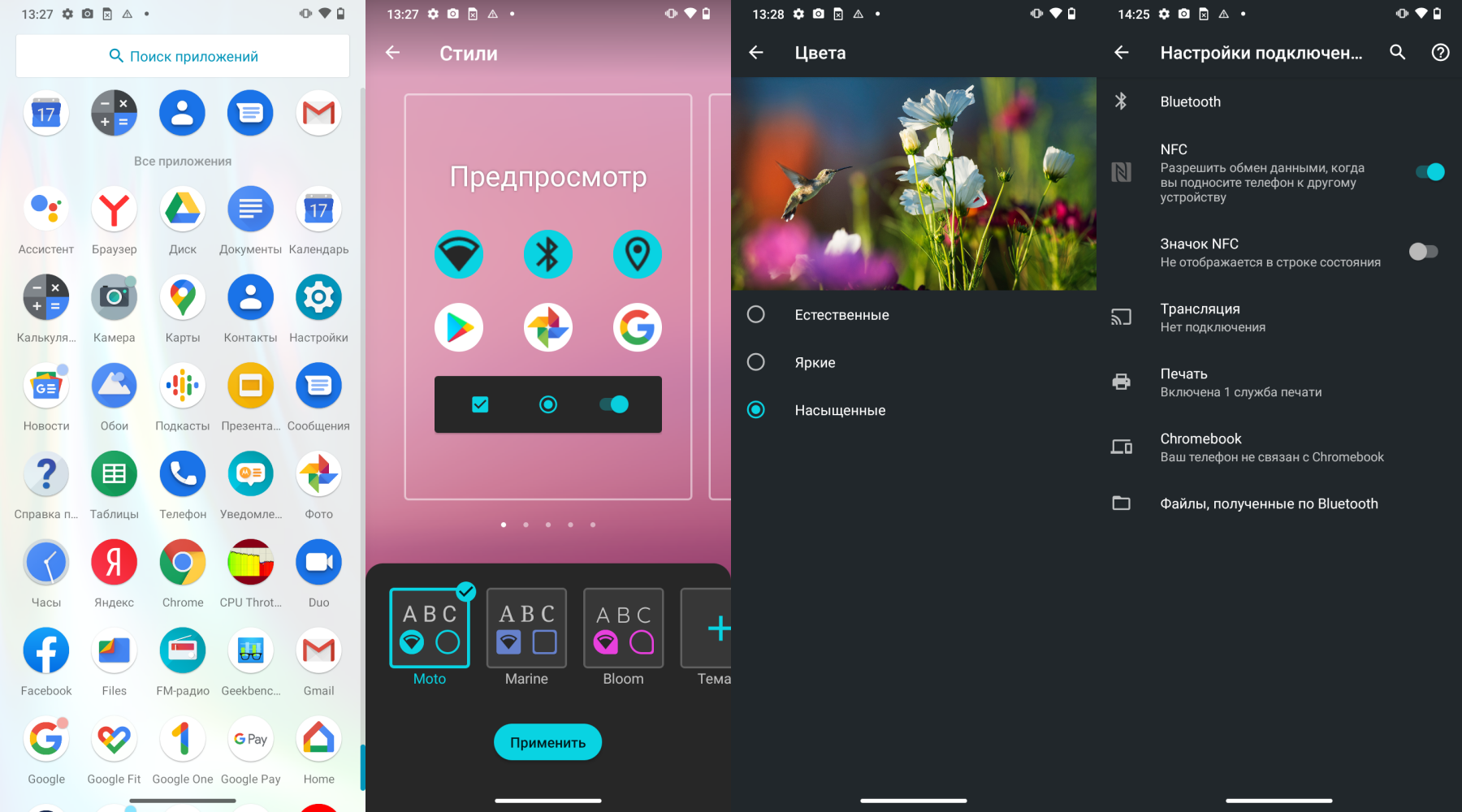 The smartphone has a hybrid card tray: you can immediately use either two SIM cards, or SIM and microSD.

It's nice that we have retained the 3.5 mm jack for connecting wired headphones, the headset is not included in the package. The sound in the headphones can be adjusted via the built-in equalizer if you are not satisfied with the default settings.

The smartphone has a mono speaker, it is sonorous, but wheezes at high volume. When playing games or watching videos, it is easy to accidentally cover it with your palm when you hold your phone in front of you.

The Moto G9 Play can also be praised for the presence of NFC, since the Moto G8 did not have this in-demand feature. There are no questions about the speed of Wi-Fi, unlike the Moto G8, support for 5 GHz appeared.

There are several cameras in the phone: in addition to the main module, a separate camera for processing the depth of the frame was added here, as well as a macro camera. In my opinion, there is no special sense in the 2 Mp module for macro – the quality is very so-so. It's a shame that the ultra-wide-angle module was removed, like the Moto G8 had, it opened up more room for creativity. 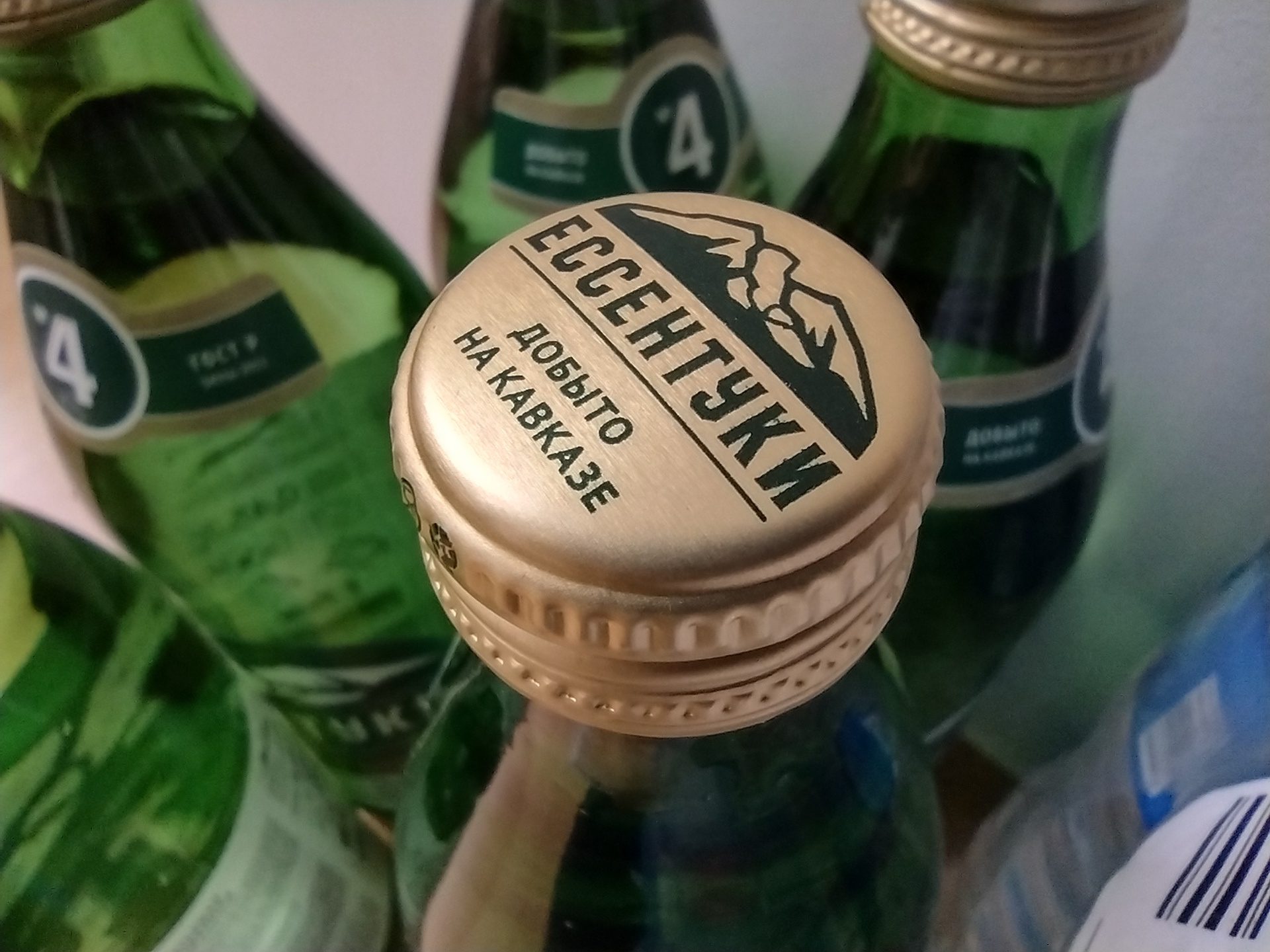 The main camera is interesting in that it supports night mode: the phone glues several frames into one, it turns out pretty well for an inexpensive phone.

Here's an example of a "regular" photo: 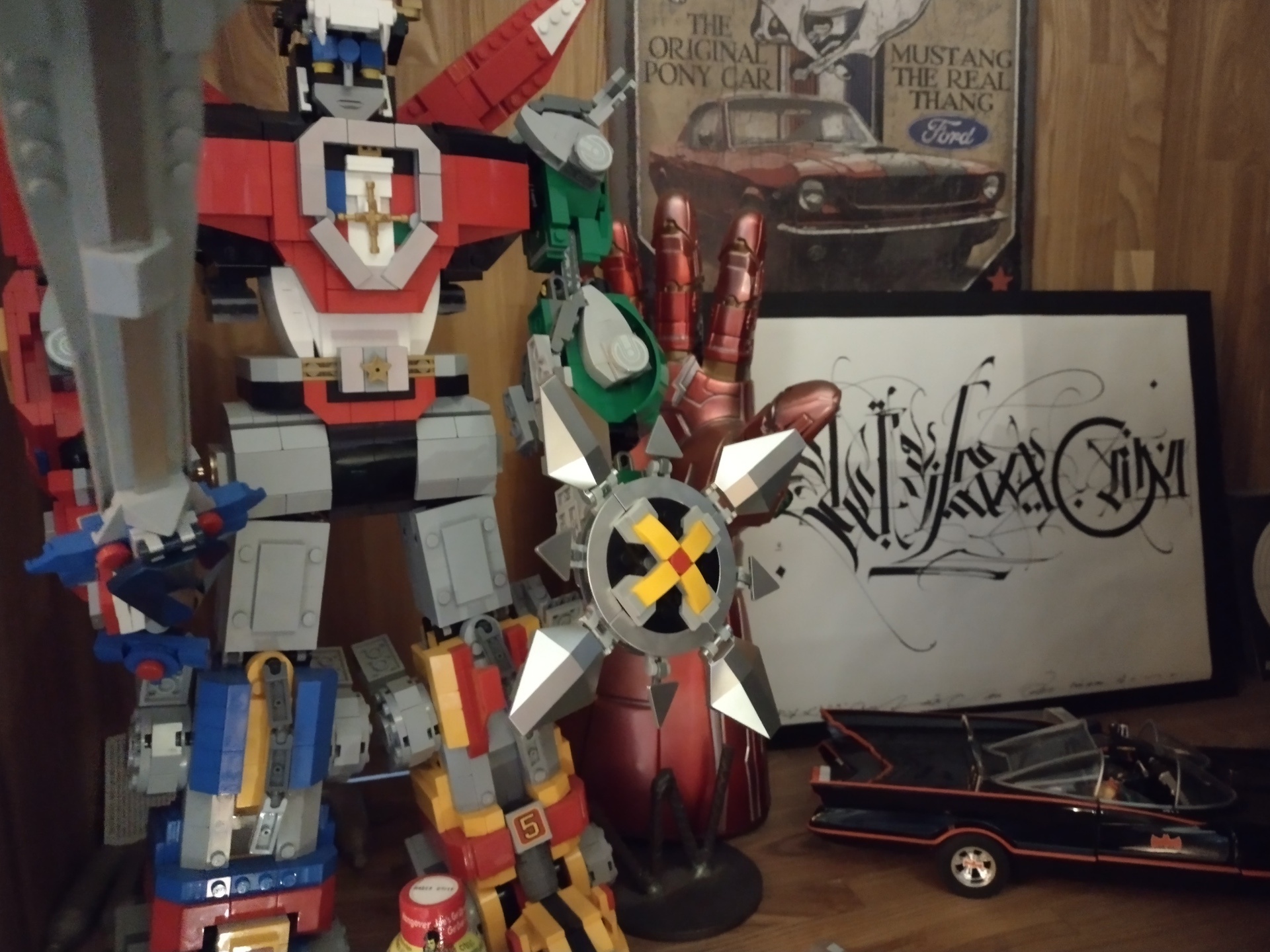 And now with night mode: 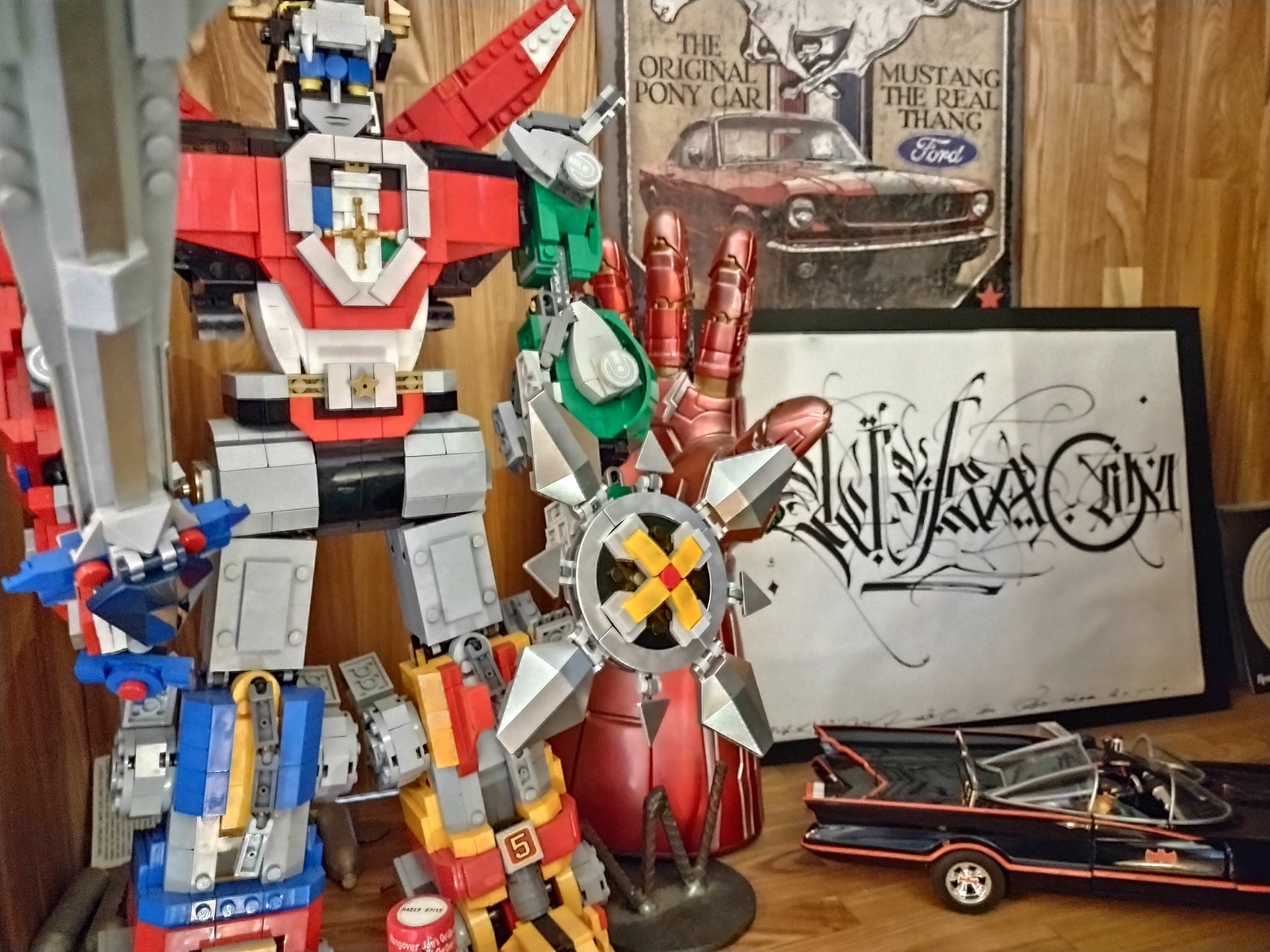 There is also a portrait mode, you can also start it and take selfies. And in the case of the front camera, only software is responsible for blurring the background. By the way, it turns out well too. 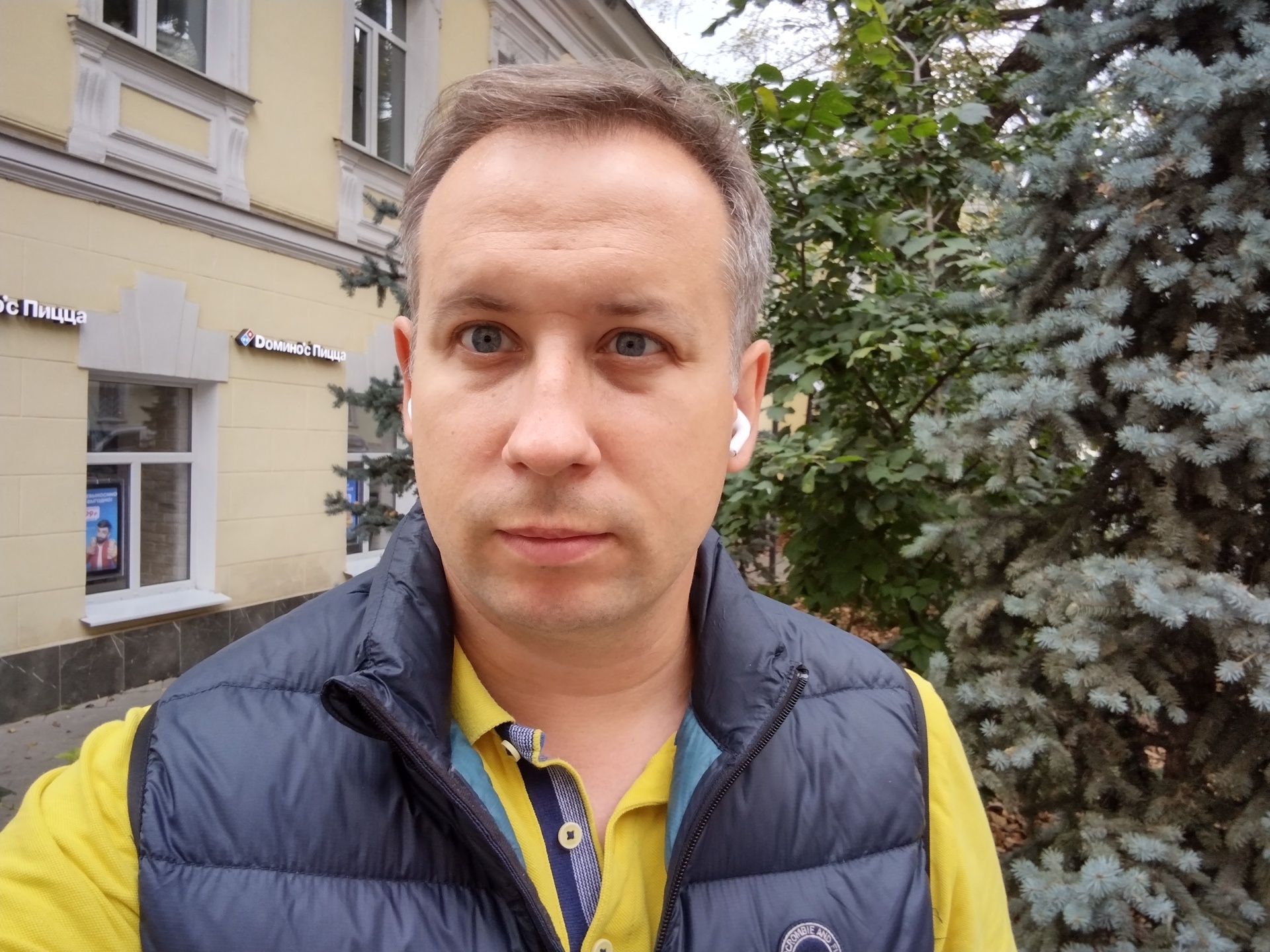 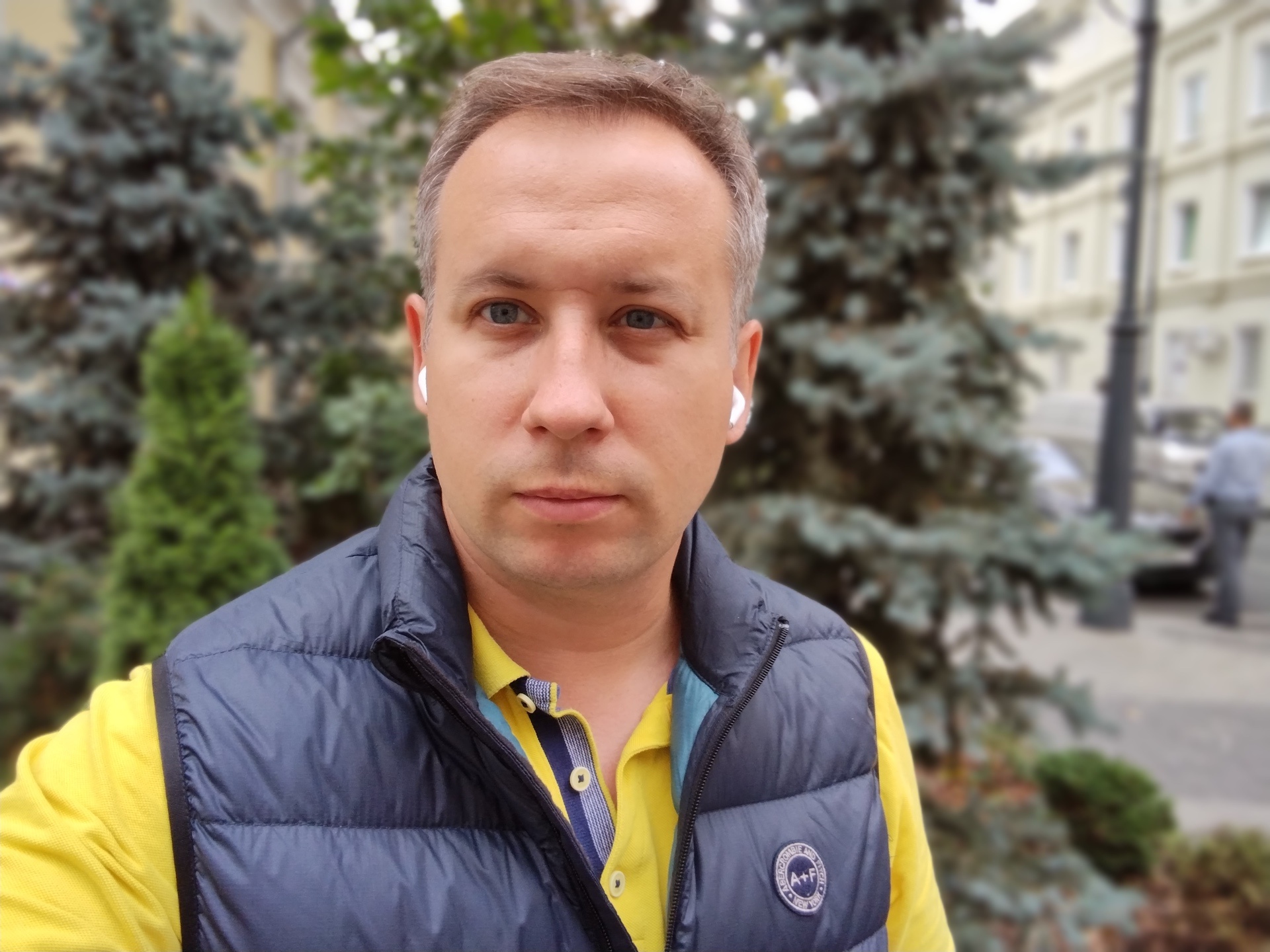 Well, a few street photos with automatic HDR, its work can be judged by the gray gloomy clouds that add atmosphere to the frame: 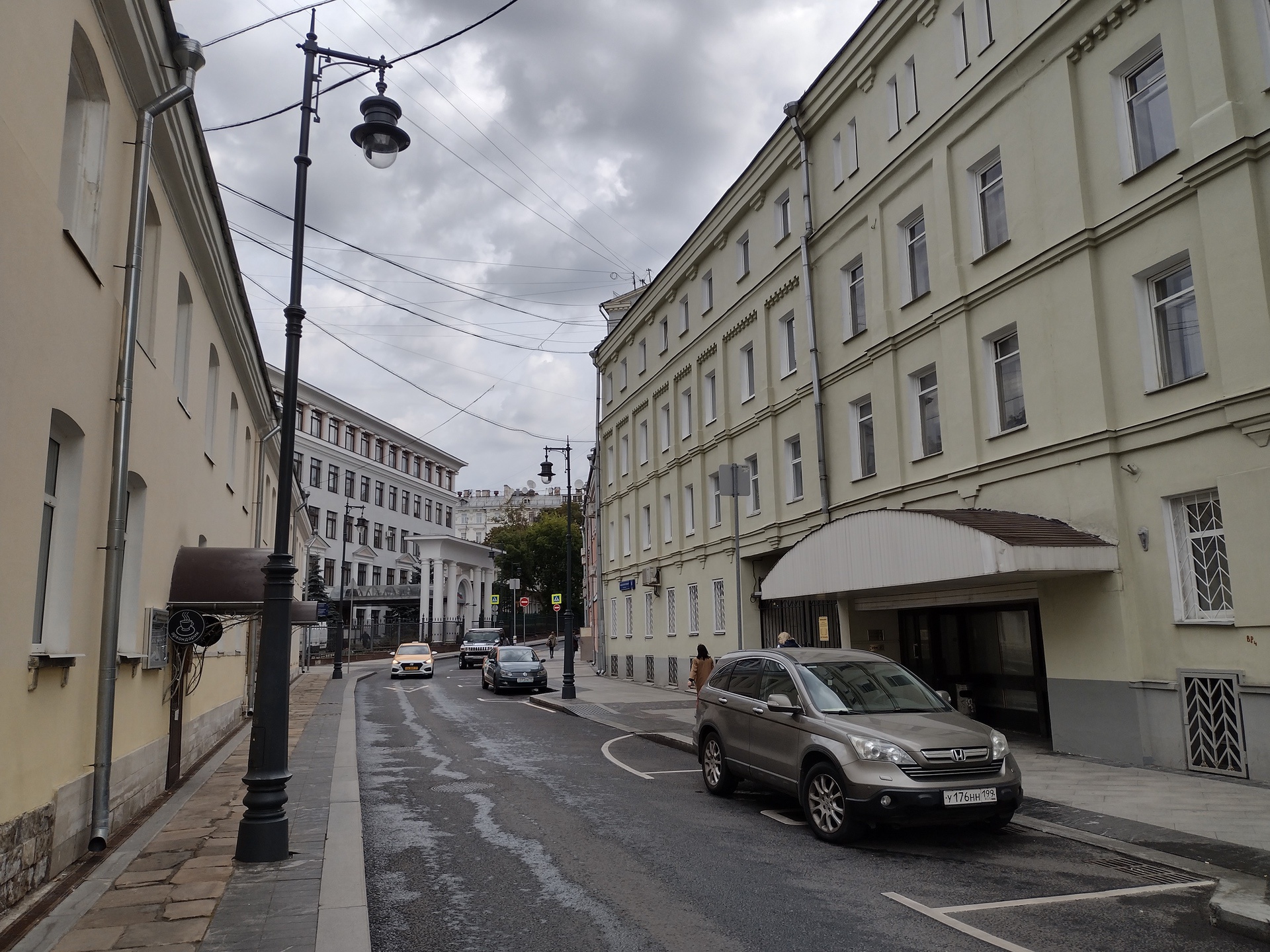 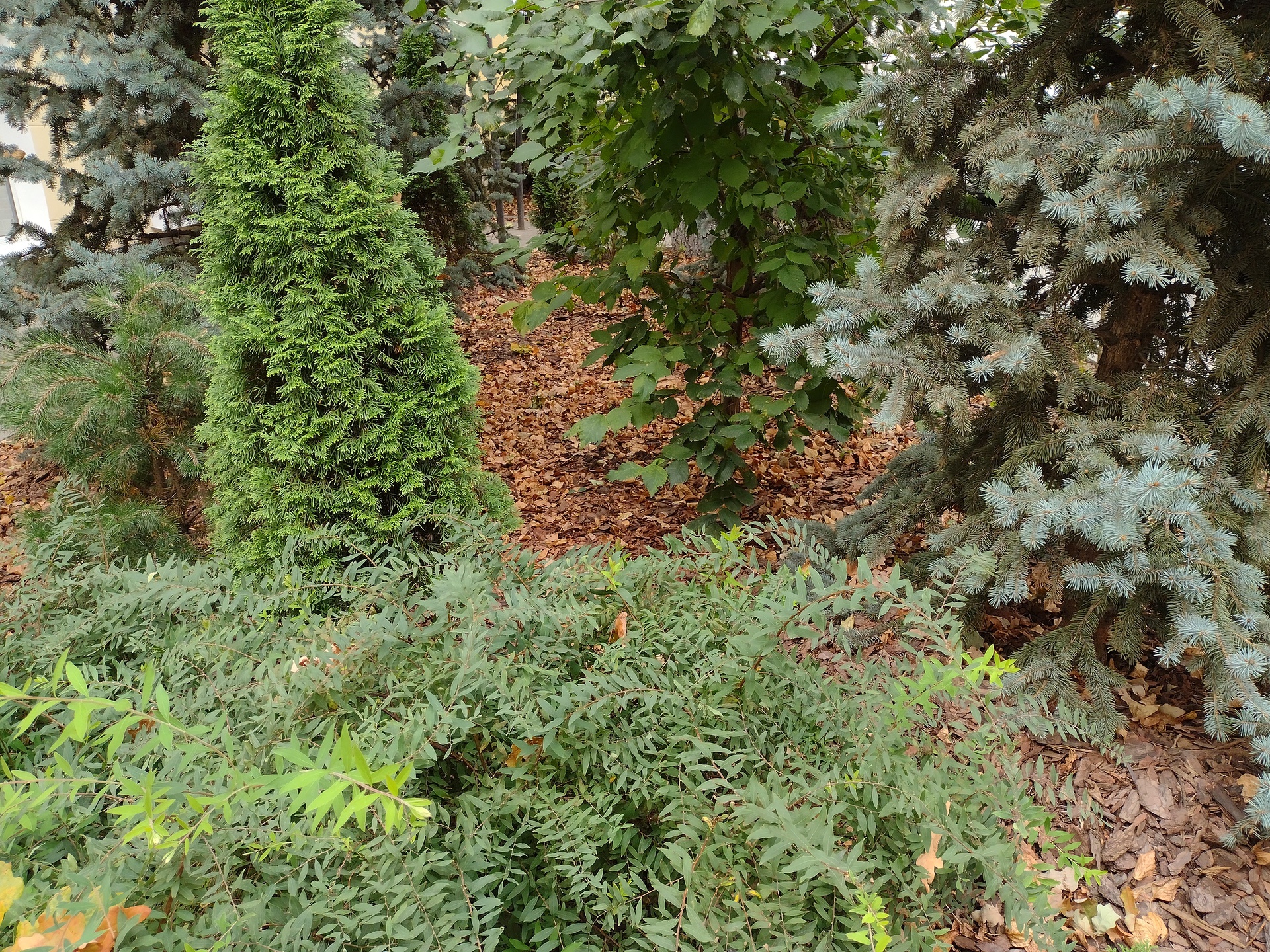 For two days of work

The operating time is at a very good level, according to the first sensations of charging it is quiet enough for two days of active use of the phone. With a particularly intense mode – for example, with constant use of navigation on the street – the Moto G9 Play will still last a day, and that's very good.

I liked that it included a powerful 25W charger. Using fast charging via USB Type-C, you can fully charge your phone in a couple of hours. As a result, we get a smartphone that charges quickly and works for a long time.

The phone will be on sale for 12,990 rubles, but if you buy it in the Citylink network, then you can save money and buy Moto G9 Play for 10,990 rubles. The promotion is limited and only valid until September 20.

In my opinion, Motorola is a great entry-level smartphone. There is only one thing: not everyone likes such dimensions, a 5.5-inch screen would be enough. However, this is already a ubiquitous trend and it remains simply to come to terms with the fact that small phones are no longer made.

Now let's talk about the pros. The phone has a laconic interface, its own add-ons developed for Moto G9 Play, they are useful and convenient. There are not so many of them, they do not interfere, and you quickly get used to convenient gestures or notifications on the locked screen.

The smartphone has good performance, it works for a long time, charges via USB Type-C, and it also comes with a powerful charger. Also Moto G9 Play will delight you with a good camera and the presence of NFC. In general, the device turned out to be exactly what a convenient and simple phone should be, so I can safely recommend it for purchase.

The Ministry of foreign Affairs of Denmark considers transnational corporations are a new kind of States. The government introduced the post of “digital Ambassador”, who will deal with the cooperation with large IT-companies. The Danish authorities decided for the first time in history to send the Ambassador to establish relations with another state, as was […]

What kind of MacBook it is advisable to buy

Apple computers – the most intuitive, productive, reliable and moderately expensive in the market of computers. The MacBook must be treated seriously, in terms of the tasks you intend to perform. With the technical specifications and comparison of the models can be found on the Apple website. This article describes how to handle if for […]