The updated Apple iPad can be called the golden mean among Apple's tablet line. It still has the best value for money in my opinion. The basic Apple iPad offers a large screen, a comfortable iPadOS, a proprietary keyboard connects to it through a dedicated connector, and the Apple Pencil will reveal artistic talents. In short, you won't be bored with it, and most importantly, it costs significantly less than the new iPad Air 4, not to mention the iPad Pro.

After the announcement, I propose to take a closer look at the new product and look at the main characteristics, highlighting the main advantages of the iPad (2020). 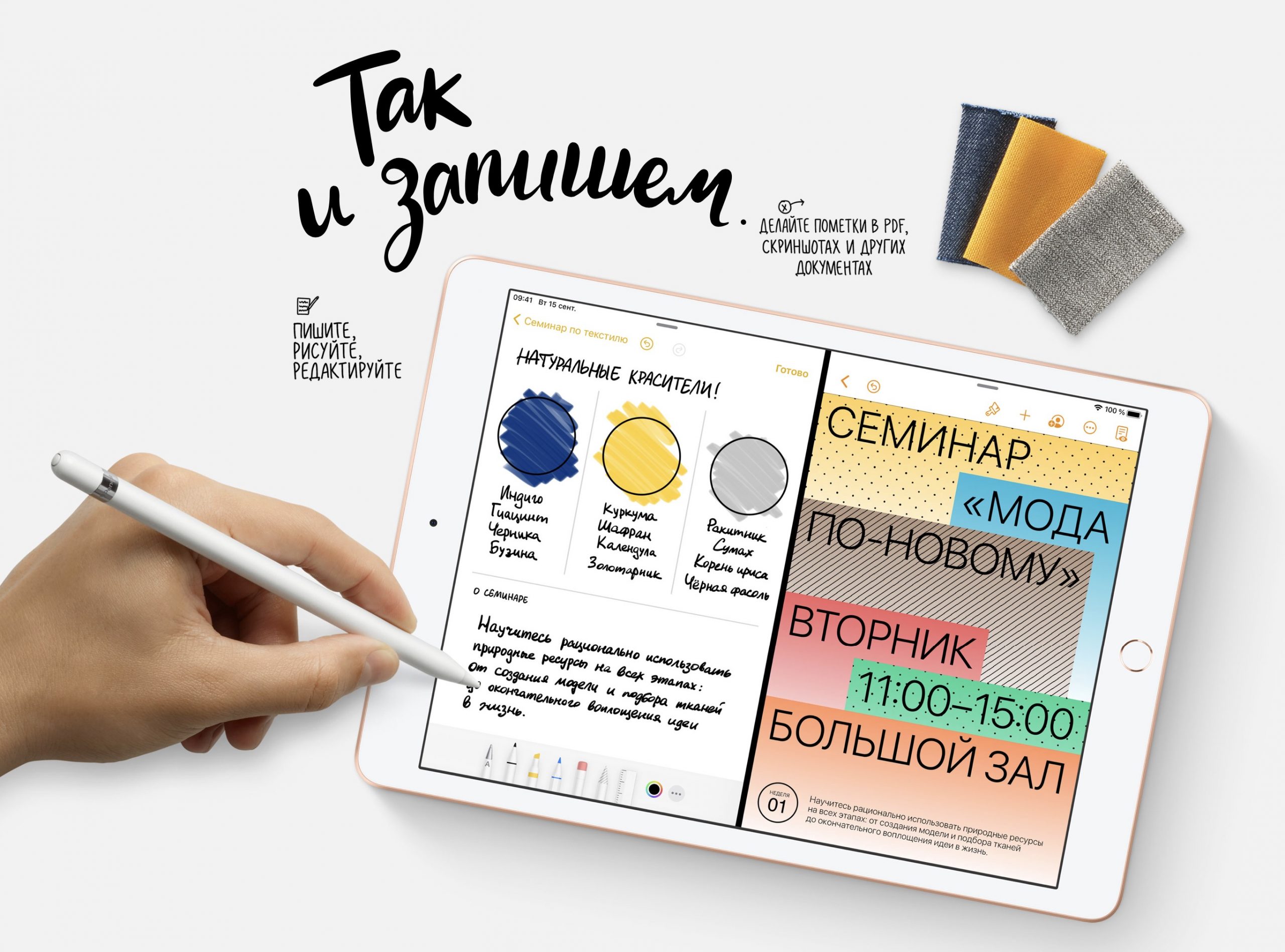 After spending its energy on design once, Apple has continued to exploit the idea for many years now: the 2020 iPad looks like the first iPad Air. And he, if anything, appeared back in 2013. Some will say that they want something new, while others will treat such stability with calmness. Why change something if everything is fine? Moreover, there is also the iPad Air 4 and iPad Pro for those who are willing to pay for a more interesting appearance. 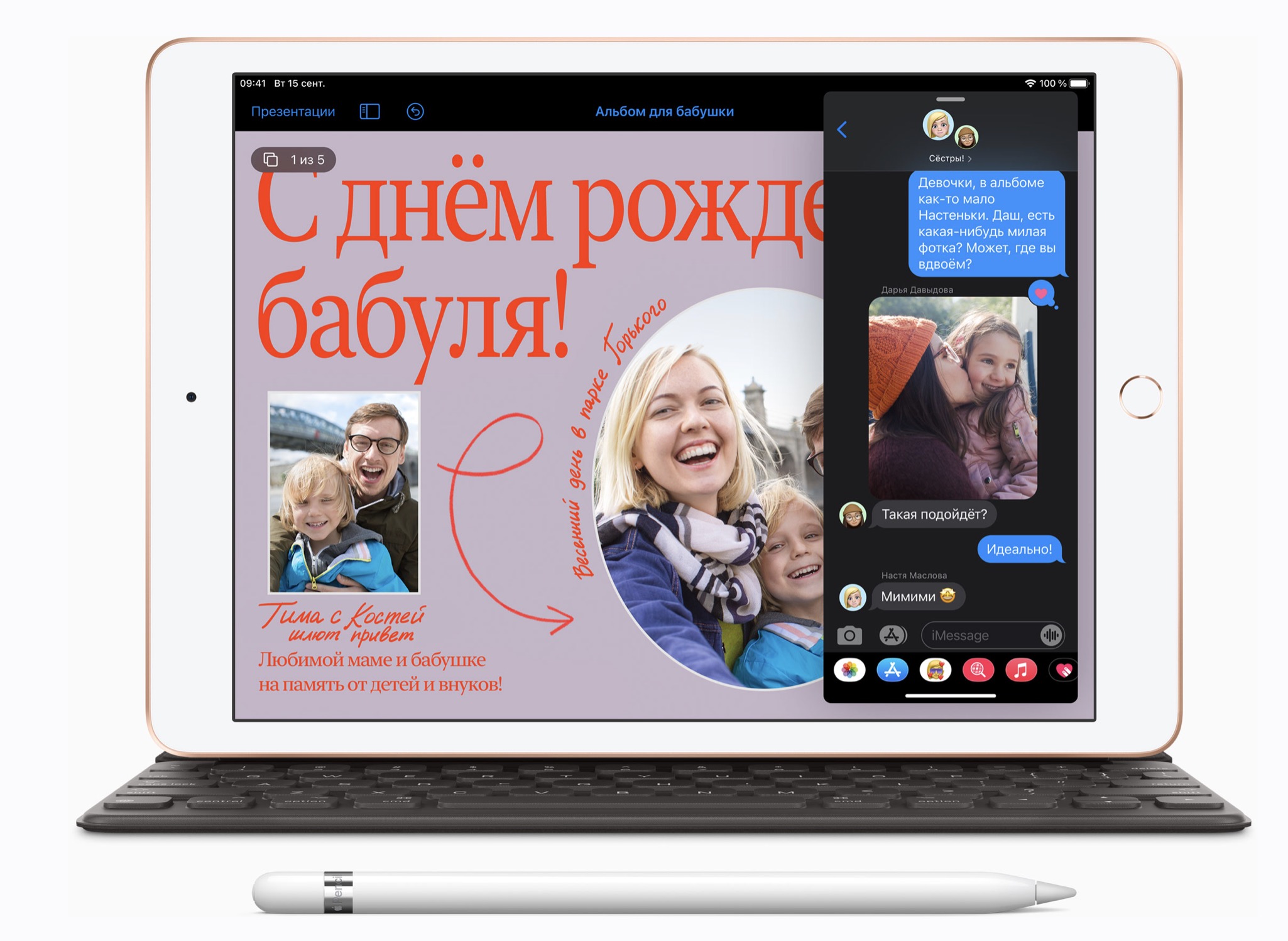 The familiar Home button, wide screen bezels, aluminum body – iPad generations change every year, but the appearance remains unchanged. Unless the weight has increased slightly compared to the 2019 iPad. There are no new colors, the iPad is still three-color: Space Gray, Silver and Gold.

Display has not changed in three years

The 2019 iPad used a 10.2-inch Retina display, and so does the new iPad (2020). The diagonal is the same, the resolution is the same, the air gap is, again, in place, and the maximum brightness margin is at the same level: 500 nits is quite enough for using the tablet outdoors under the sun.

Read also:   New game for iPad will help to correct the vision 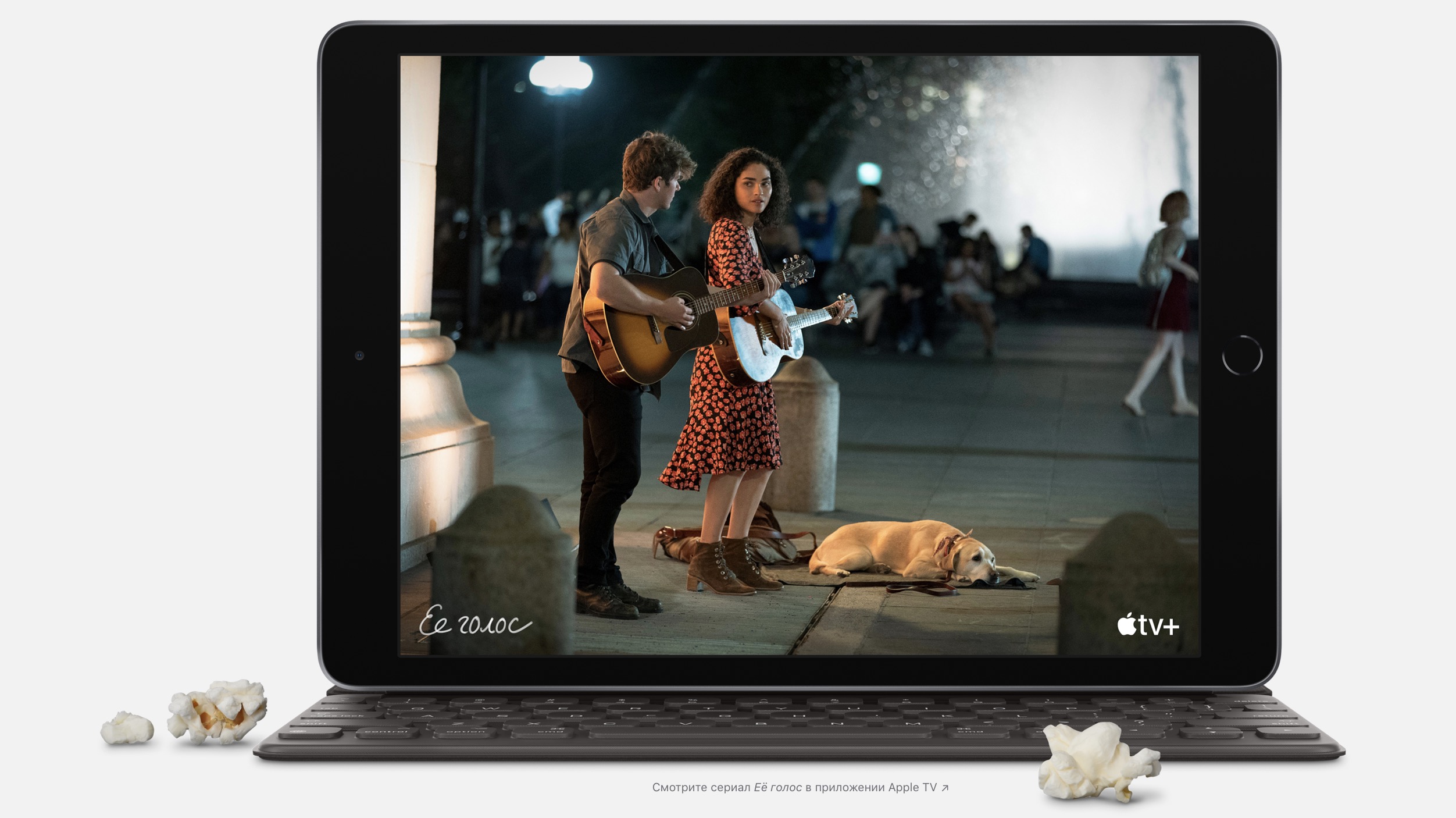 But the processor was updated

How long can you use the system-on-a-chip borrowed from the old iPhone 7? Together with the Apple A10 used in the 2018 and 2019 iPads, the 2020 iPad has the much more powerful Apple A12 Fusion, known from the iPhone XS and XR. By the way, the A12 is also used in the fifth generation iPad mini.

On the one hand, this is an old processor again, on the other, it still has such a power reserve that it will be enough for quiet use over the next few years. All in all, the Apple A10 from four years ago is retired.

The amount of memory is still limited by two modifications: a basic version of 32 GB and an improved version of 128 GB. I can hardly imagine how to live with a tablet with 32 GB, but given that Apple is actively promoting cloud services, the idea is clear. The buyer of an entry-level tablet, realizing that memory is not enough, is likely to connect to iCloud, buy an extended package and live and live. Nothing is known about the amount of RAM, Apple traditionally does not document this data.

But I still advise you to take the 128 GB version, so that later it will not be excruciatingly painful. So you can upload a video to a tablet, upload toys – in general, enjoy using it.

I thought that due to the new processor it would be possible to squeeze out an hour or two of work relative to the old model, but no. Apple claims the same 10 hours of battery life on a single charge. By the way, the iPad (2020) is still charging via Lightning, and if you want USB Type-C, then look towards the Pro or Air 4.

However, a 20W power adapter is now included, and the cable comes with USB Type-C. A very nice bonus!

With cameras, there are no changes at all, everything is as before: a front-facing 1.2-megapixel camera of eerie quality, the main one is 8 megapixels and 1080p video recording.

Smart Connector for connecting the Smart Keyboard cover on site, this is important: the tablet can be turned into a mobile office and typed as much as possible. The Apple Pencil is also available as an accessory.

If you wish, you can pay extra and purchase an iPad with a SIM card slot. 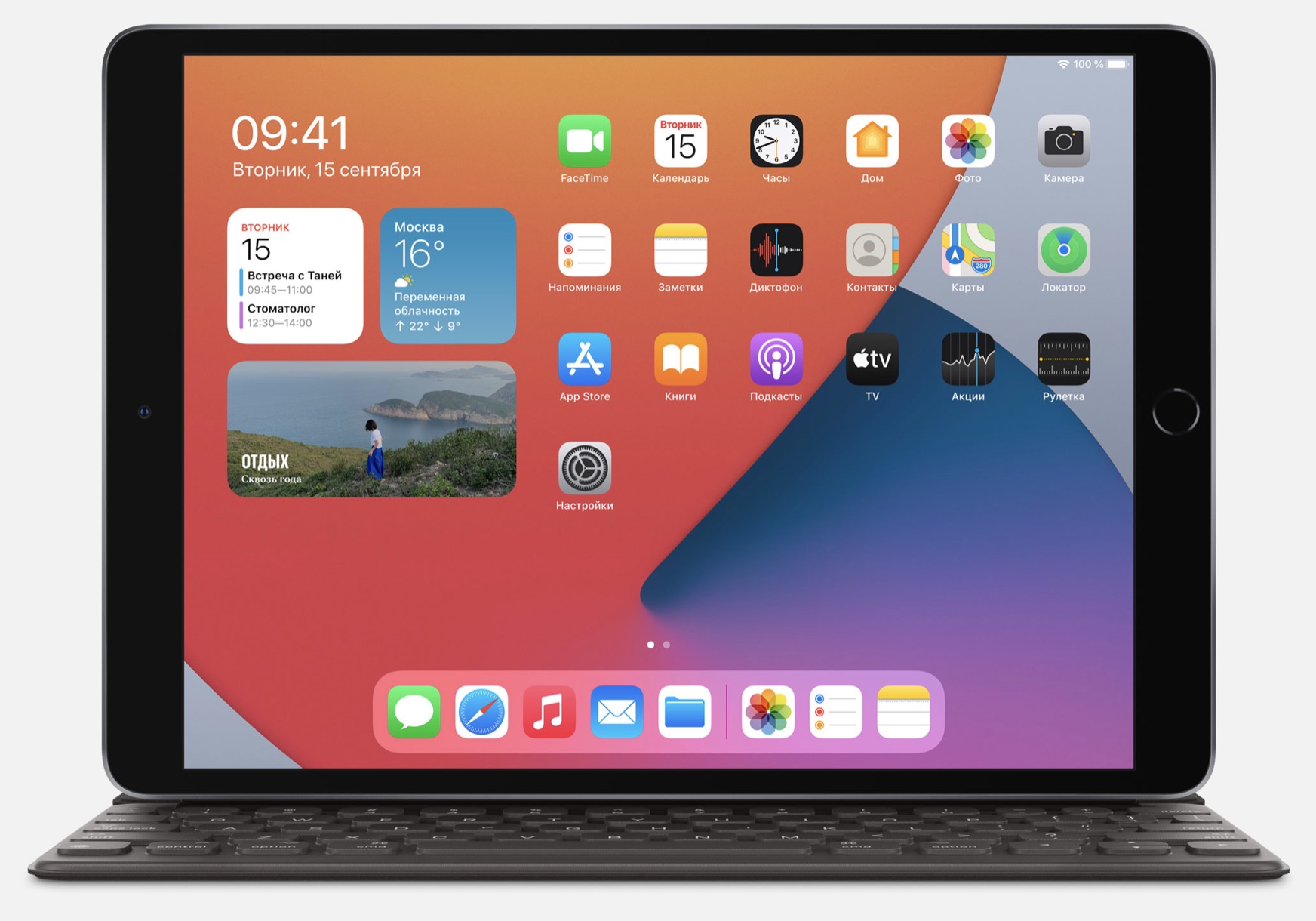 The official prices for iPad (2020) in Russia are as follows: 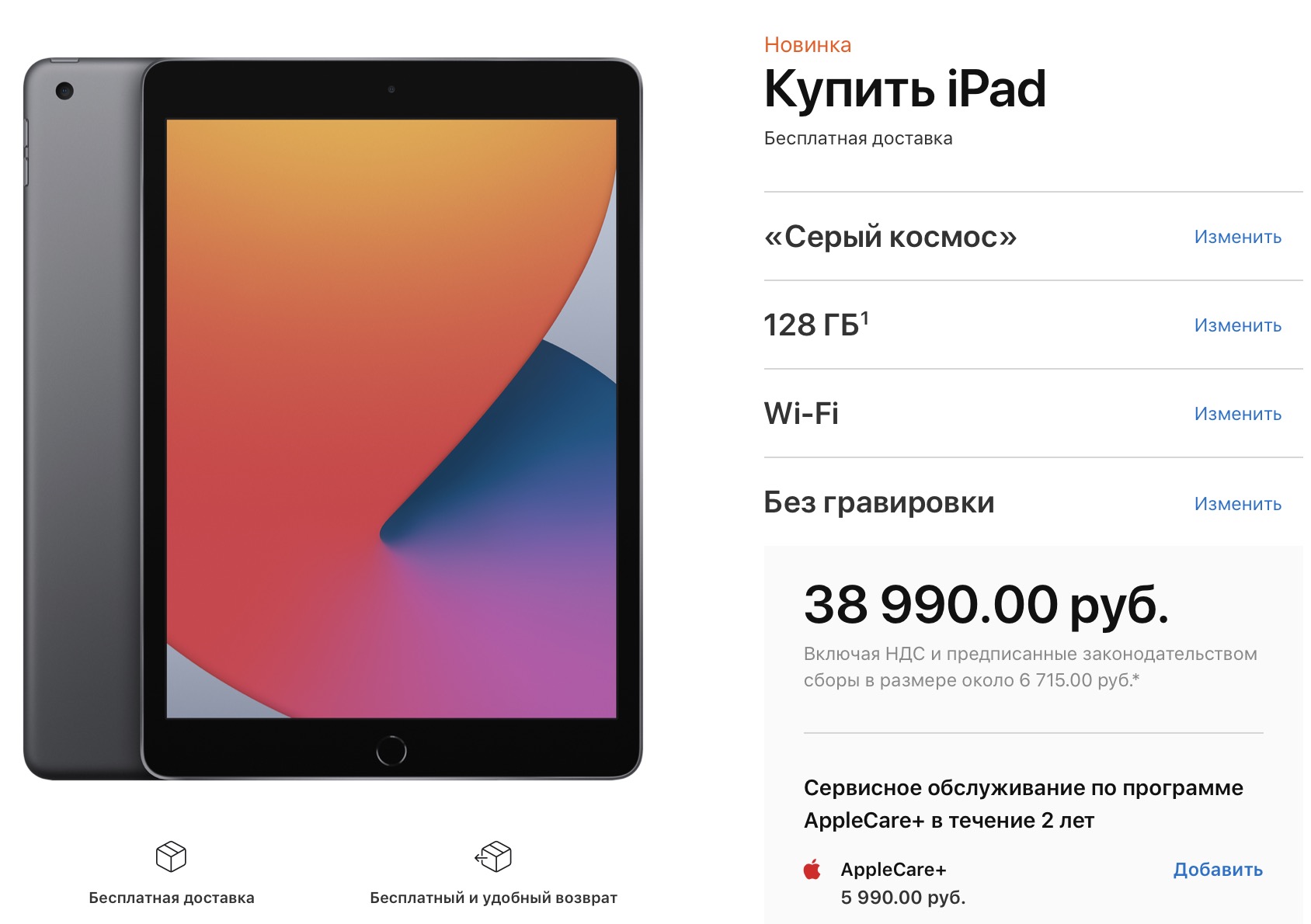 For comparison, the iPad (2019) in stores costs a couple of thousand rubles cheaper, the difference is insignificant. But if you increase the amount of memory and choose the 128 GB version, then the tablet costs 39 thousand rubles. And this is almost last year's iPad Air 3: a model with 64 GB can be bought for 43 thousand rubles.

Take it or not?

After reading the article to the end, the question arises: what is new in the tablet sample of 2020? In fact, there are no special changes, it's still the same iPad, it's just that now it should work faster and better digest heavy games.

For iPad owners of 2018 or 2019, this may seem like an insufficient argument for an upgrade, especially if you do not load the tablet with video editing, toys, but just read the news on it or watch YouTube. It is customary to update these phones at least once every two years, and tablets live at home for a very long time: 5-7 years is quite a common indicator. And of course, for those looking to upgrade from their old iPad 2 or iPad Air, this is a great purchase.

Read also:   Punch Club – in the spirit of old school

The basic iPad has always been a great device for absorbing content year after year. Inexpensive, simple, reliable, value for money is the best Apple tablet ever.

KGI: Apple announces 13-inch MacBook and two MacBook Pro at the presentation on October 27, iMac 5K monitor will be released next year

Analyst Ming-Chi Kuo of KGI Securities is well known among Apple fans with its often come true predictions about the characteristics of not yet released products of the brand. This time he shared informal information about the upcoming presentation hello again, scheduled for October 27. According to Kuo, Apple is preparing the announcement of three […]

Computer supply to Russia fell by 45.5%

The fall of the Russian market of personal computers in the third quarter was a record: the volume of PC shipments in Russia declined by 45.5% in volume and more than 49% in revenue. After overstocking in the end of 2014, buyers are in no hurry with the purchase of computers, has risen in price […]

The head of Apple Music plans to leave Apple

According to rumors, the legendary Jimmy Iovine, head of Apple Music, will leave from Apple until the end of the year. This was reported edition of Billboard. Jimmy Iovine, Tim Cook, Dr. Dre, Eddy Cue Likely, Iovine will leave his post in August 2018. 4 years later after Apple acquired Beats, which previously worked Jimi. […]