At WWDC 2019, Apple introduced the new iPadOS operating system. To be more precise, it “separated” some functions from iOS, which are now available only for tablets, and made a separate system out of it.

Is there anything bad about this? No. On the contrary, it became clear what the company was going to do in the future: to develop and improve the iPad so that even more people could give up laptops and begin to design services that bring a lot of money to the company.

IPadOS is the best thing that has happened with the iPad. Without exaggeration: there are a lot of innovations, and they are important, and not just new application icons, as we are all used to. All that is in iOS 13, but with the additions. Let's get it right.

Which tablets can I install iOS 13 on?

The new system is supported by all the released iPad Pro, iPad Air 2 and Air of the third generation, iPad mini of the fourth and fifth generations, as well as the iPad 2017-2019 model year.

Dark theme and other delights of iOS 13

I see no reason to retell the innovations of iOS 13, which are also available for tablets. Just read the review or watch the video, and then come back:

He was changed. Not that “wow, this is a completely new system,” but the innovations are nice. 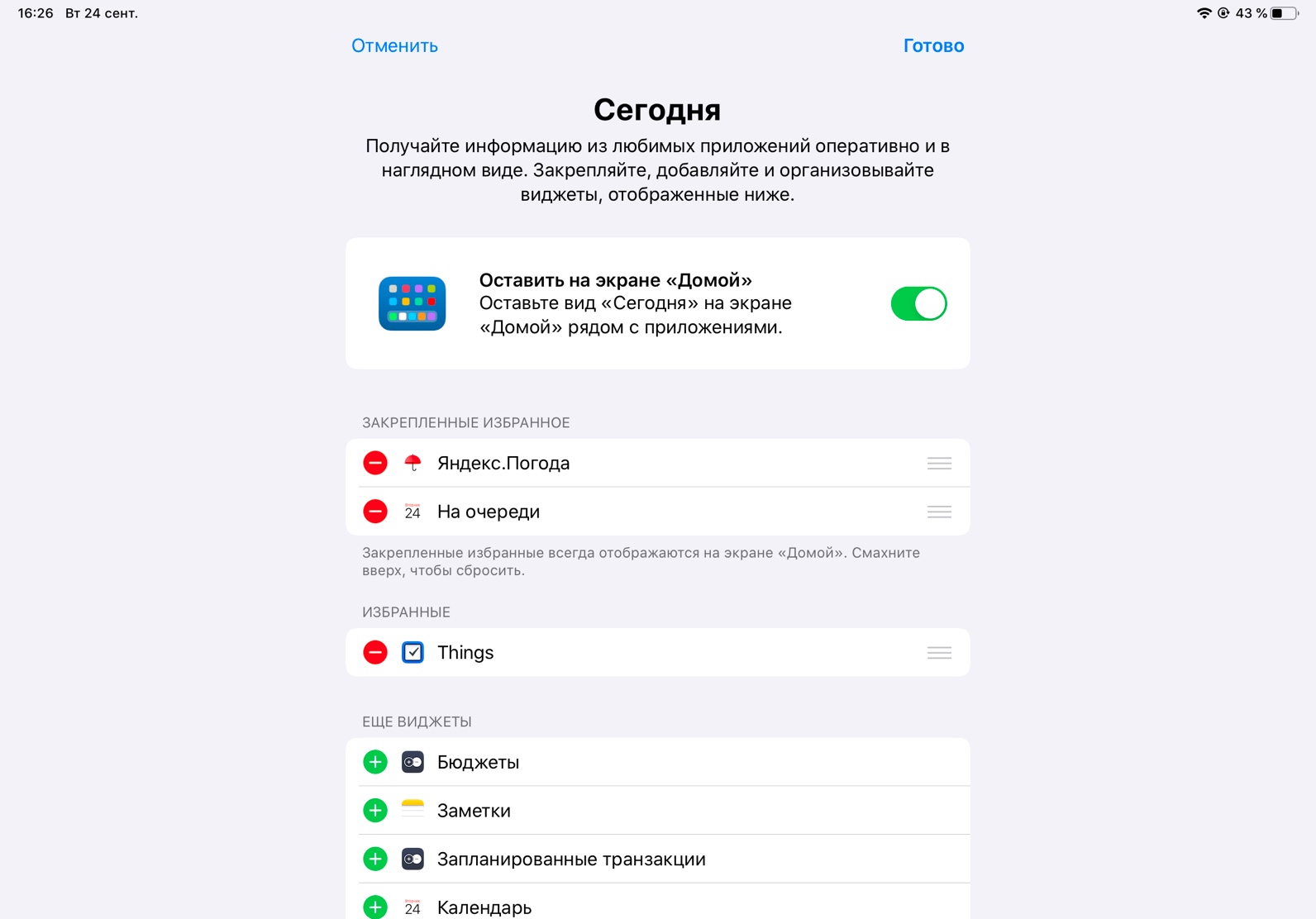 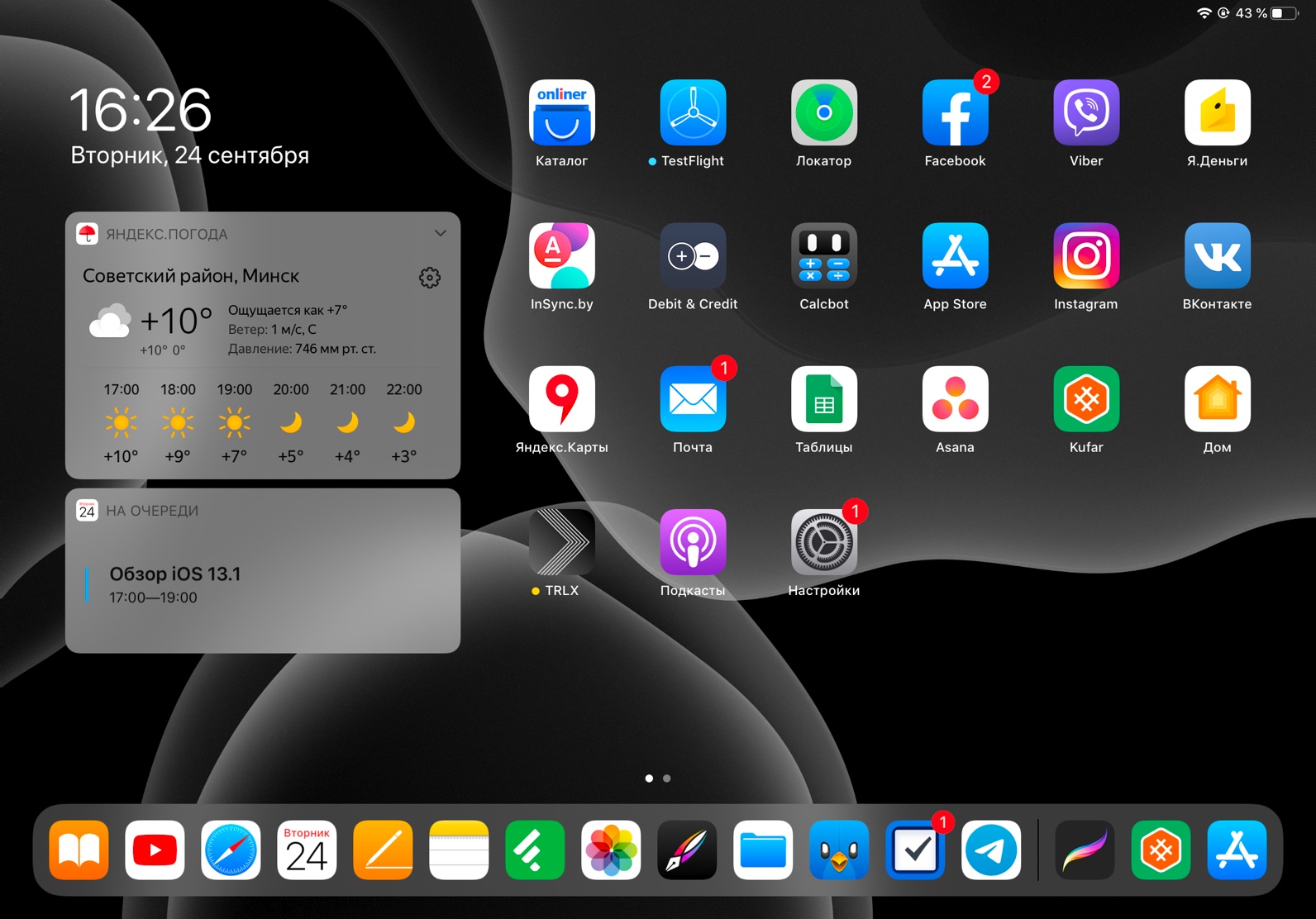 First: widgets. They can be fixed and choose what will be displayed constantly and what will be hidden. If you don’t need widgets all the time, then you can hide them. Then they will just stretch, and you do not need to open another desktop. A large clock and date are no less pleasant innovation.

Secondly: icons. Plus ten icons due to the enlarged grid. It was 5 × 4, but it became 6 × 5. Again, if you are more familiar with the old version or everything went too small on the iPad mini, you can return the old display to the settings. 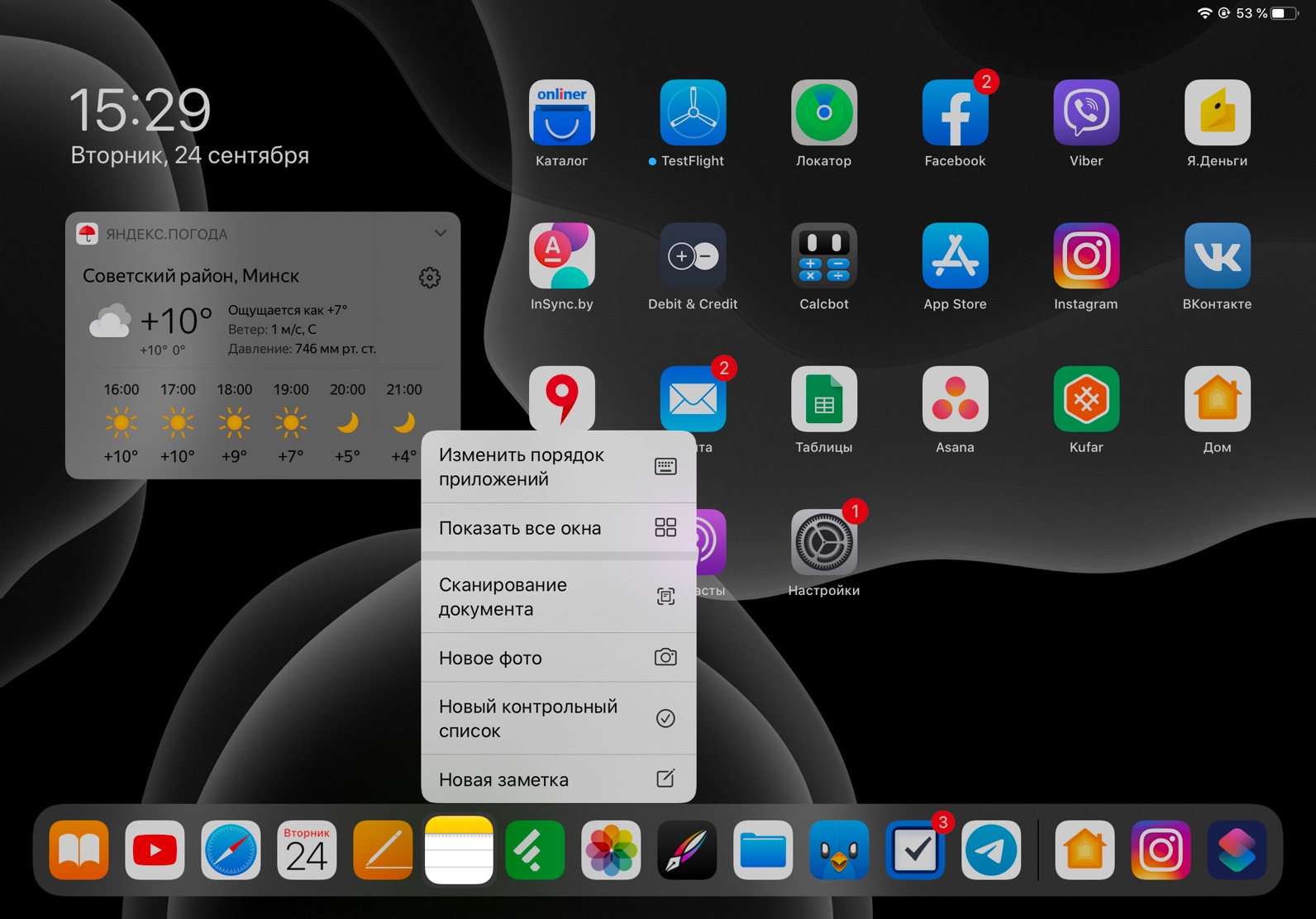 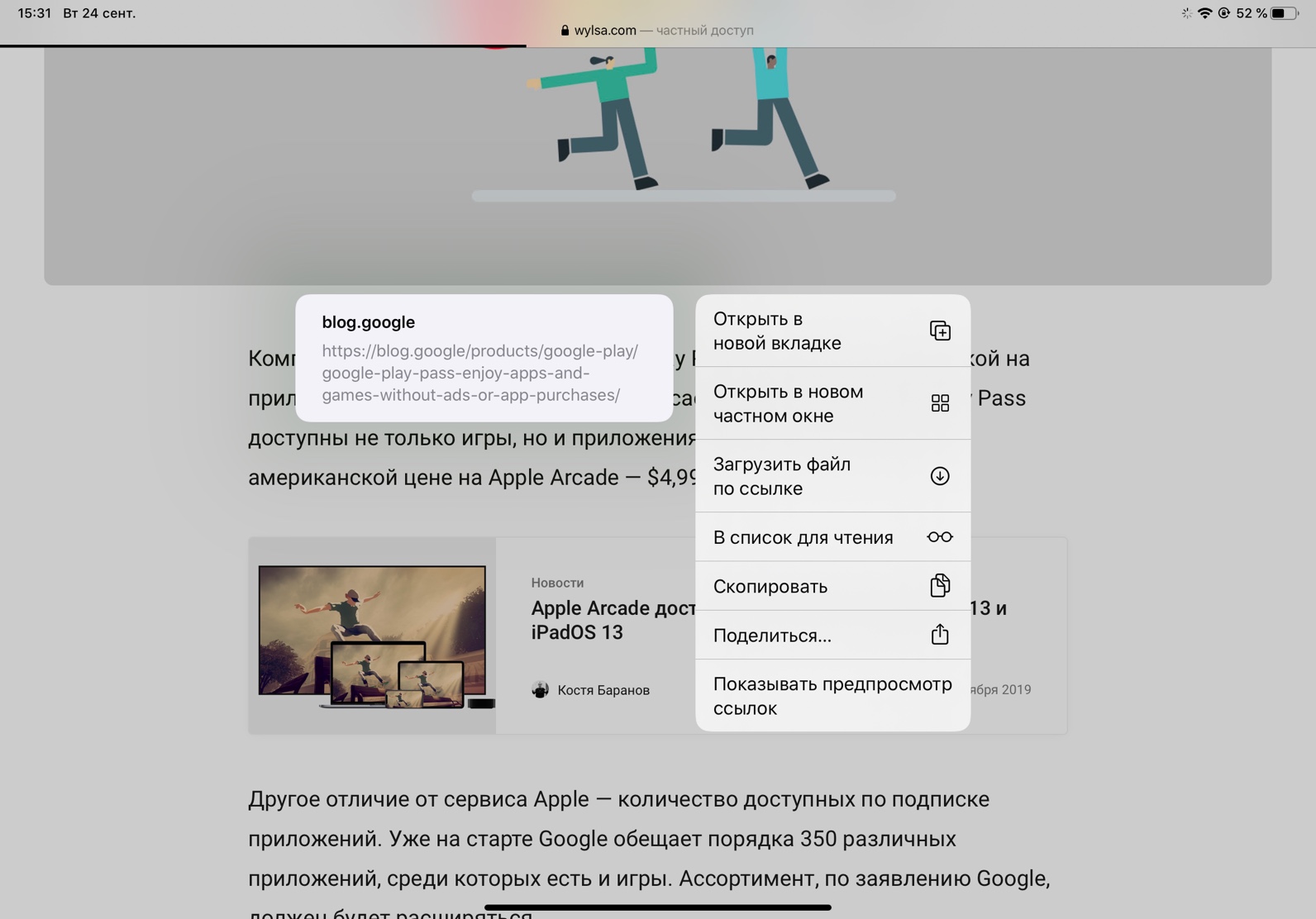 Third: Haptic Touch. Yes, the function was previously available only on the iPhone XR, and now has replaced 3D Touch on all smartphones of the company. Now she has appeared on tablets. Due to the lack of a tactile response, it is not as pleasant to use as on an iPhone, but a huge number of quick actions have become available that can speed up the work several times. I constantly use Haptic Touch with application icons and browser links. 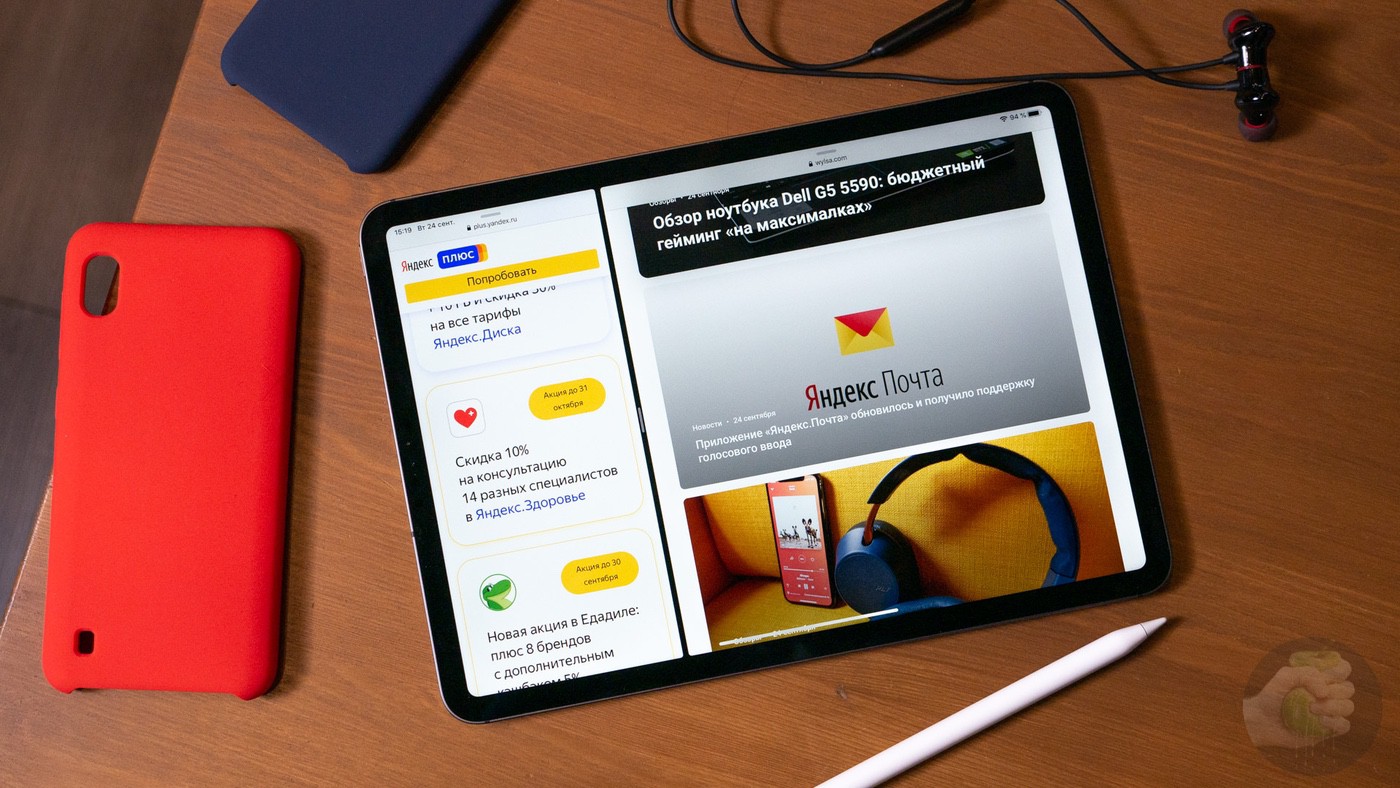 For example, you can open two Safari windows as separate applications: work with text in one and look for information in the other. And if the information is no longer needed – closed. But the most important thing that I have been waiting for a very long time is the updated Slide Over mode. Now you can open how many applications are convenient in a pop-up window and switch swipe between them, just like in iPhone X and newer. 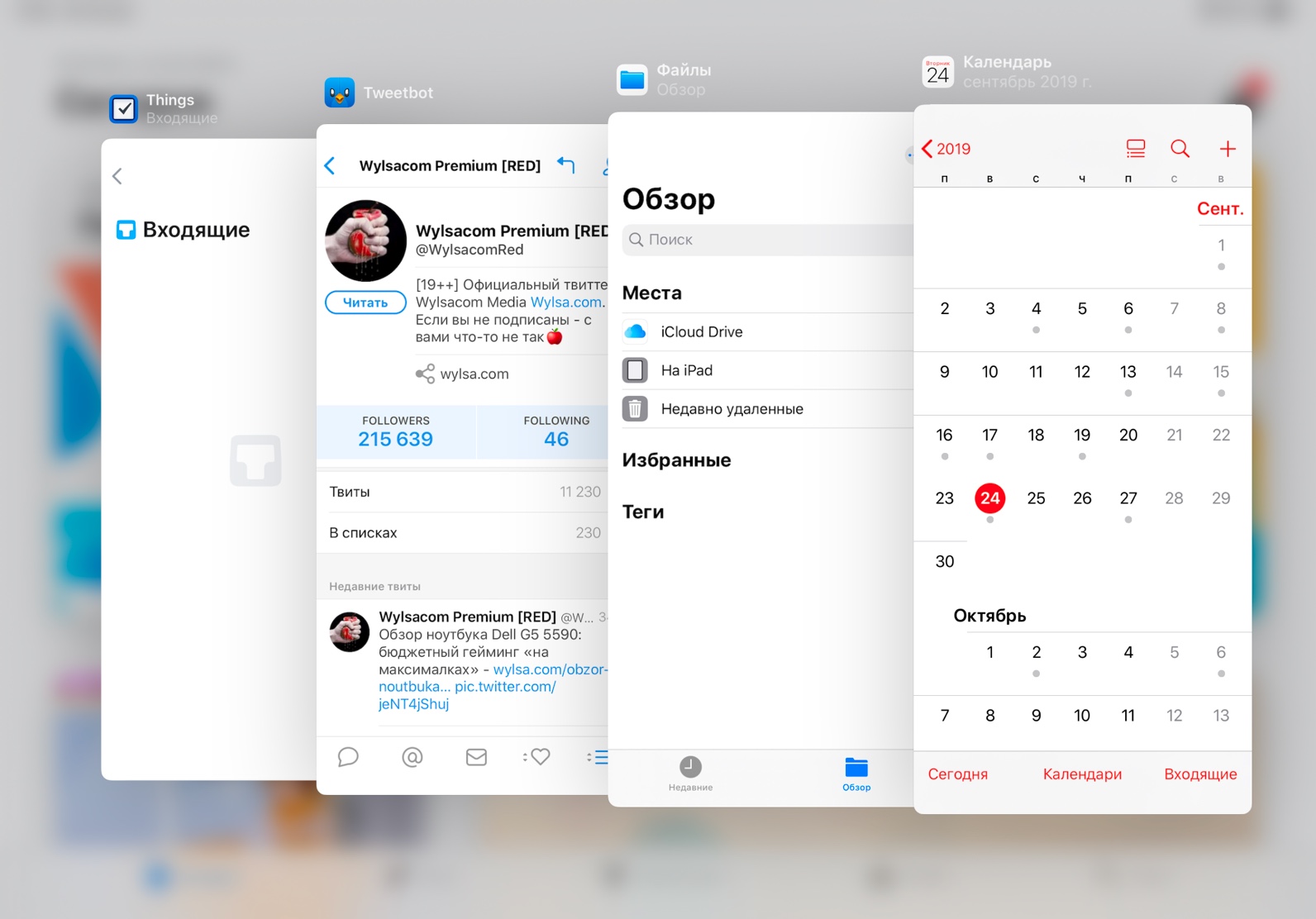 In the "Multitasking" menu, all open application windows will be displayed. If these are two applications in Split View mode, then they will be shown in one window. If you need to see all open windows of one application, hold your finger in the "Dock" on the application icon and select "Show all windows" in the context menu. If you accidentally closed a window, you can restore it by clicking on the "Open Closed Window" button. Beauty! 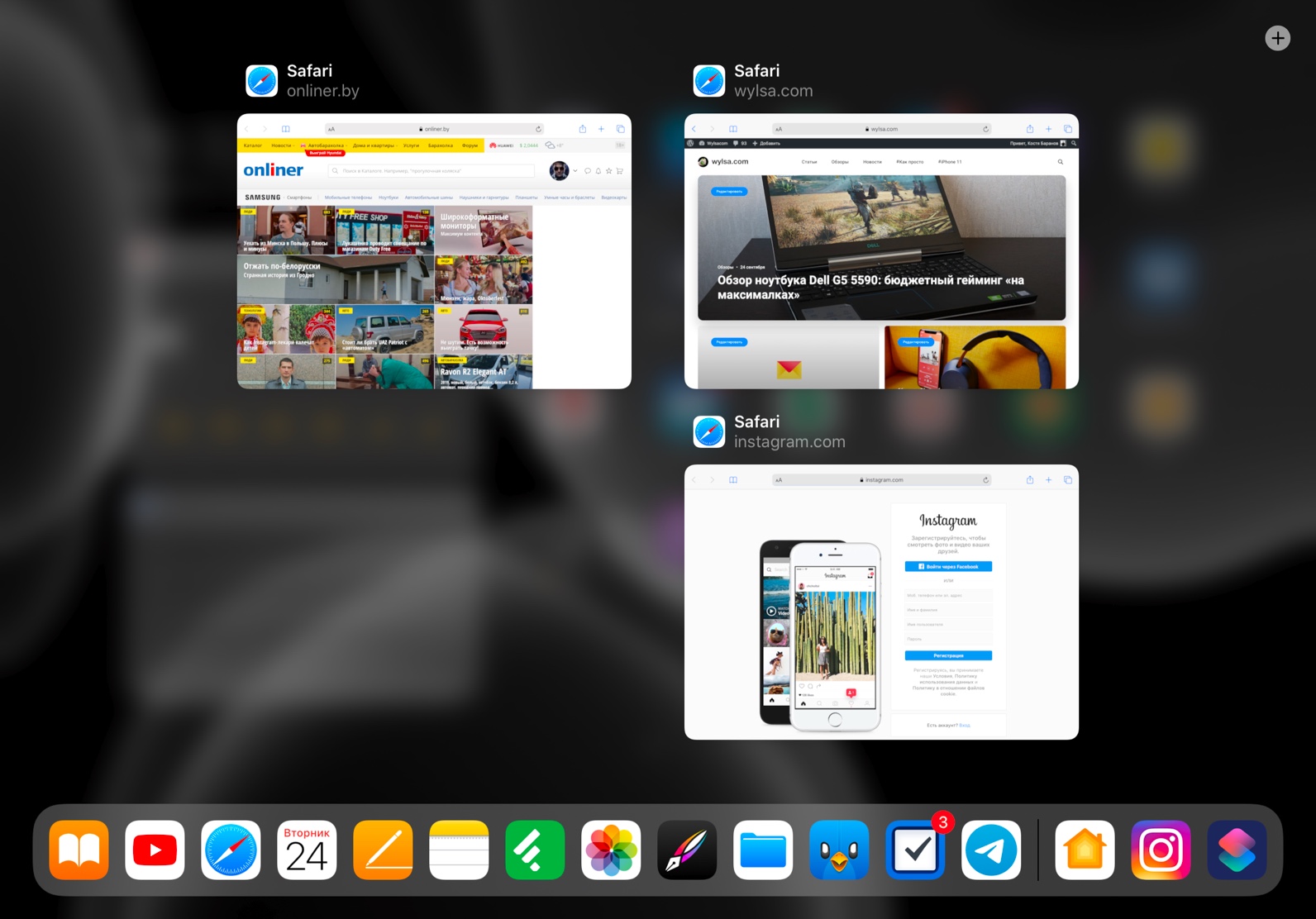 And that's all right, and Instagram is still not optimized for the iPad. So why not add the ability to run non-optimized applications in Slide Over mode? It will look exactly better, but, probably, it will become a feature of iPadOS 14.

READ  Why is the new iPhone SE better than the old iPhone 8?

Safari is now a true desktop browser. All sites open as on a computer, and not as in mobile versions. In fact, the browser from macOS was simply transferred to tablets.

And you don’t need to optimize anything: WordPress and Google services (Docs and YouTube, for example) work well, and not with restrictions and incomprehensible redirects to other applications. 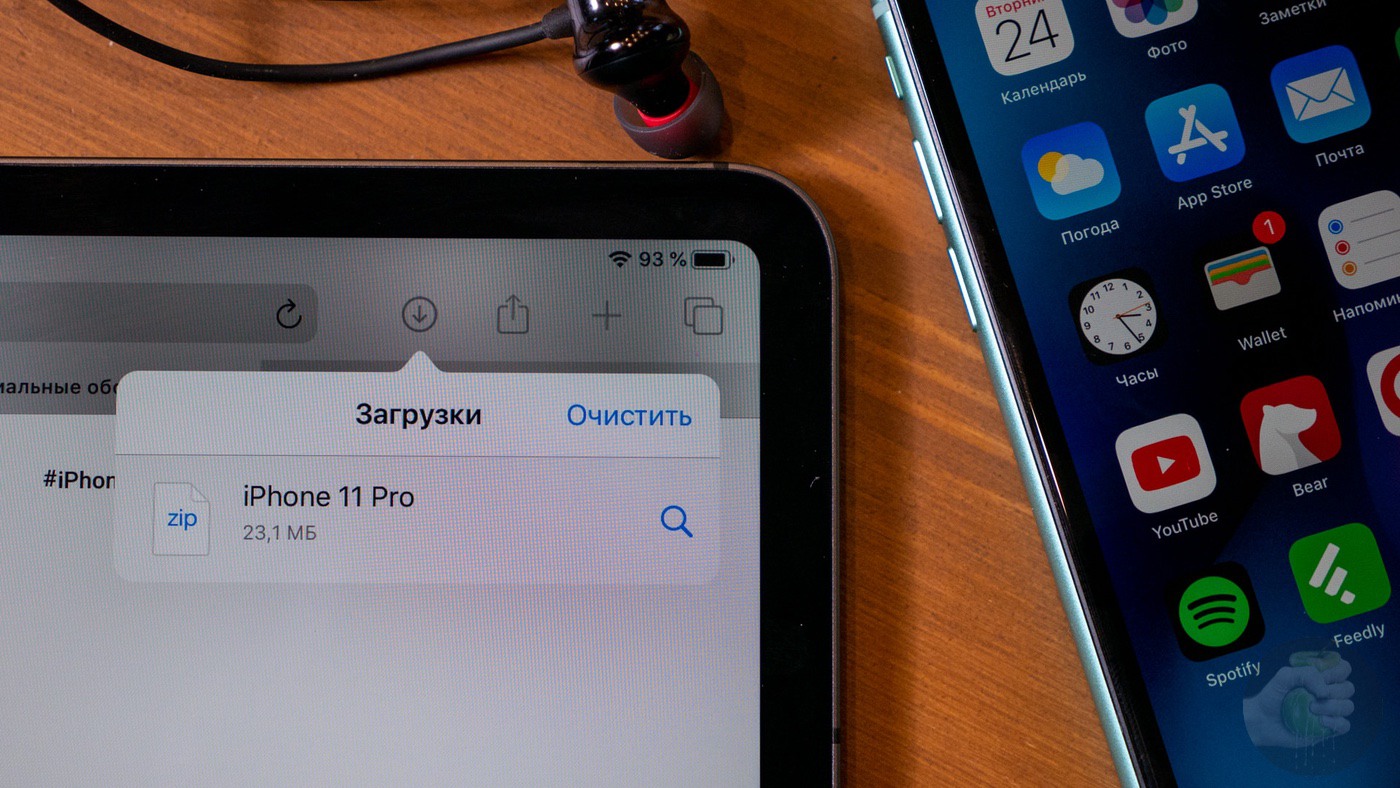 But can there really be a “full-fledged” browser without a built-in download manager? Even Apple understands that it isn’t, so they added the ability to download absolutely any files to the device’s memory. Happened?

Gestures for managing the system have not changed, but new ones for working with text have appeared:

Three-finger pinch – text copied:
Three fingers pinch twice – the text is cut out:
Three fingers breeding – insert:
Swipe three fingers left – cancel, right – return;
Hold your finger on the cursor and move it wherever you want;
Tap twice in one place and move your finger – selection of text.

Apple Arcade is the best gaming service on mobile platforms. A huge number of games are already available without ads and in-app purchases for only 199 rubles a month. And to play it was more comfortable and, possibly, more familiar, iPadOS introduced support for PlayStation 4 and Xbox One gamepads. Top!

Not all games have acquired controller support yet, but you won’t have to wait long. And now the important question is: who will buy the Nintendo Switch when there is an iPad? 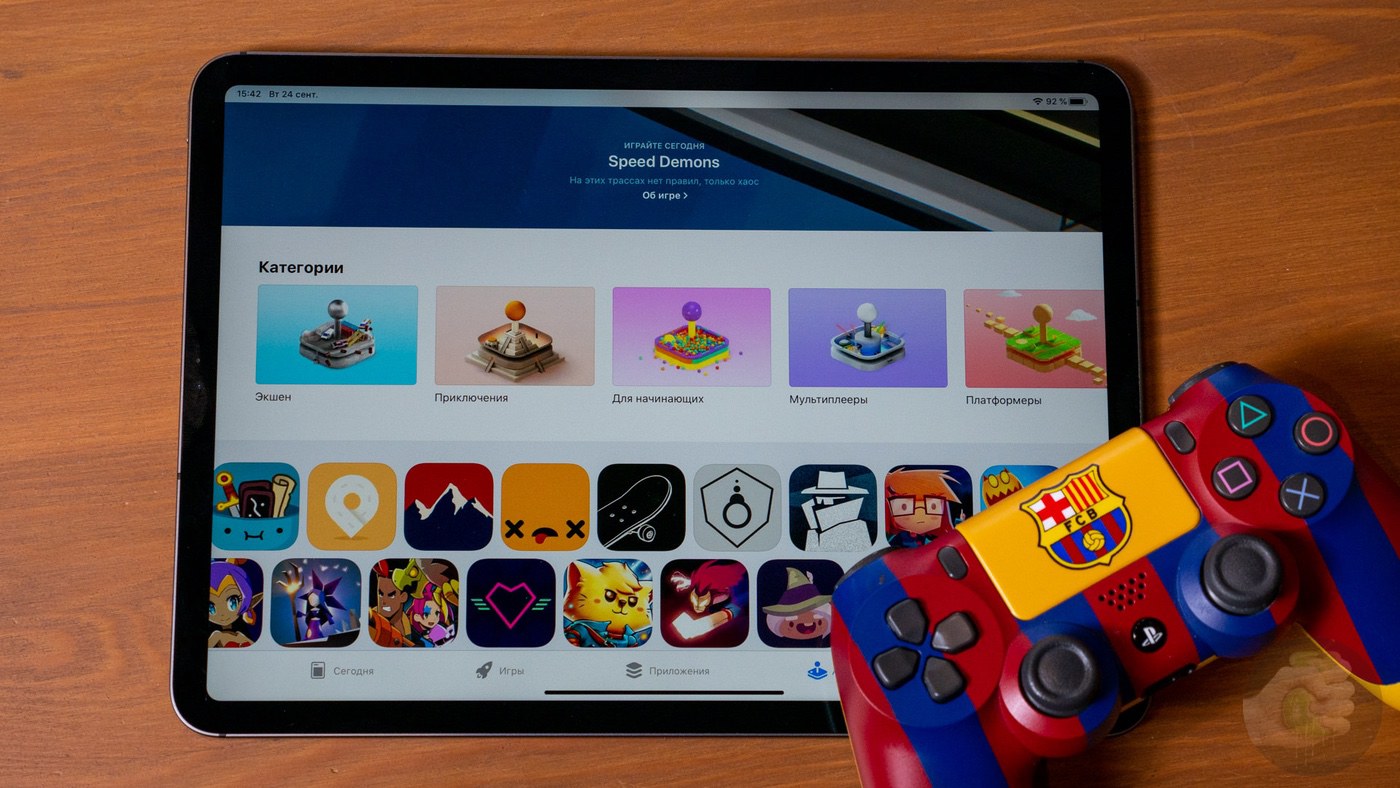 If you do not replace the laptop, then add

It's about the Sidecar feature that will make an extra monitor out of your iPad. It will work in conjunction with macOS Catalina, which will appear a little later, but it will work as it should: even now, in beta versions, there are no long waiting times for connection and problems with broadcast delay. Everything works clearly, in the style of Apple.

READ  How to recover deleted messages in iOS 10.3

New macOS Catalina: from the desert to the ocean

And now you can replace the laptop on the iPad?

Like a year ago, as with the release of the very first iPad Pro, the answer does not change: it depends on your tasks. Yes, things are getting better, and I know a lot of people who abandoned laptops in favor of the iPad (including myself), but they won’t be able to switch.

There are no highly specialized programs. There are analogues, but not originals. And here it’s like with the transition to the iPhone, if before that I’ve used Android all my life: at first everything is annoying, and then you get used to it, set it up and fine. It seems that you can no longer without it. With applications in the same way. 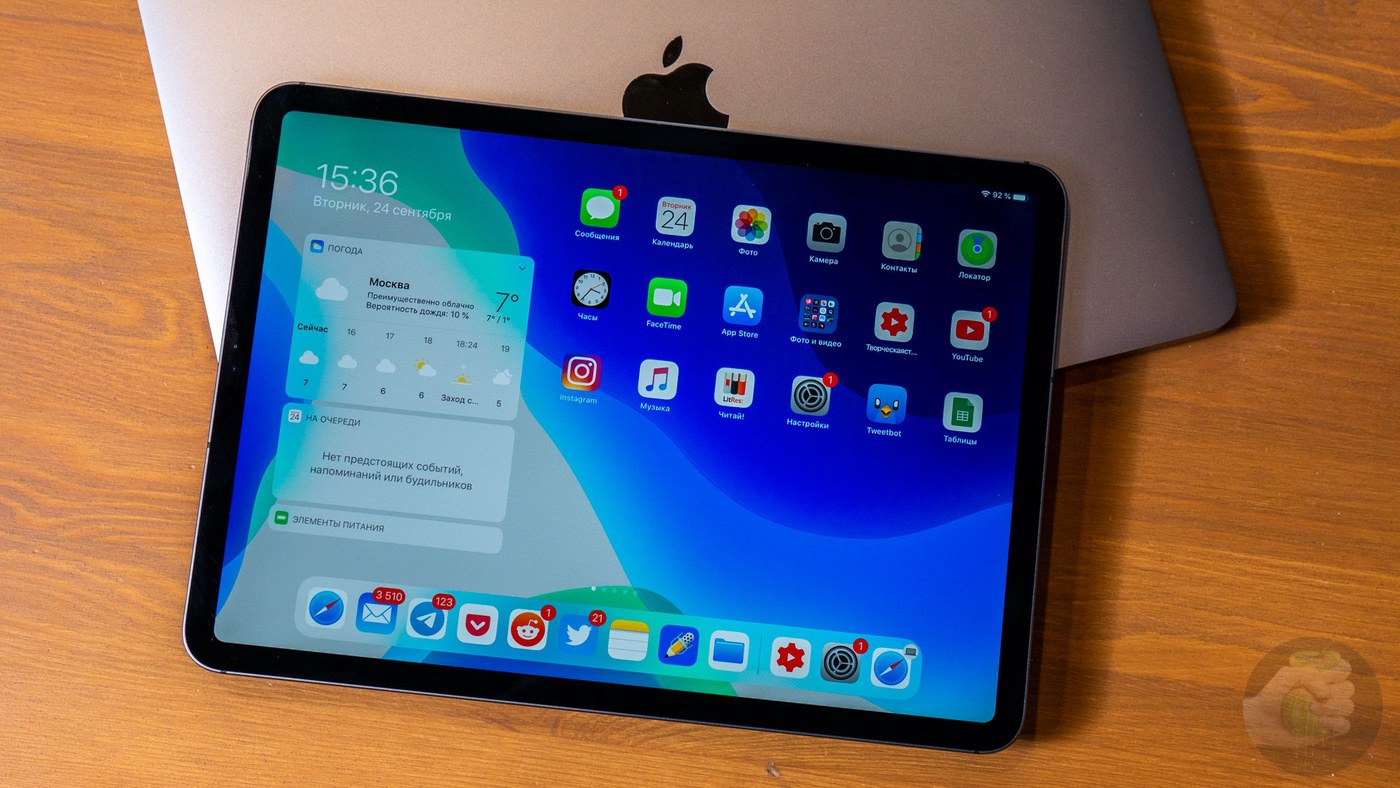 Will I recommend switching to the iPad with the new system, which is so all the top? Someone yes, but not everyone. I already dragged the girl to the iPad, and after a few months she does not plan to change it to a computer.

Do you work with text? Top, fit iPad even for $ 329. Are you processing the photo? You can on the tablet. Working with videos? Vlogs can be mounted, but something serious – no. And a bunch of other examples, when possible, but with limitations. 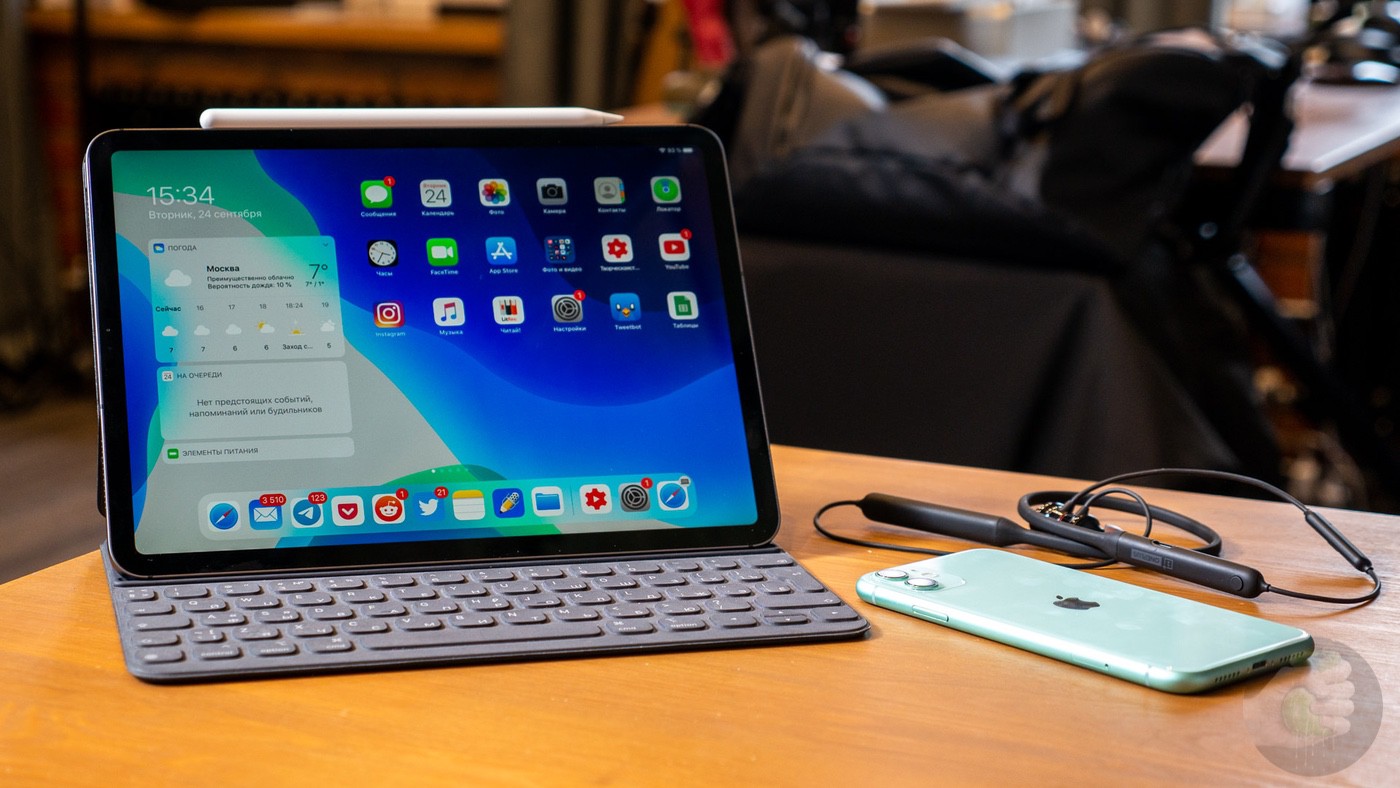 But the whole joke is not about that: children who are 5-10 years old can easily replace a computer with a tablet. Perhaps they don’t even know what a computer is. The touch screen is much easier to understand – only in very old schools and areas they teach computer science using a PC. And almost everywhere – tablets, where books are convenient to read, and there are plenty of training programs. Therefore, a generation that has just begun to learn can easily use the iPad for everything.

Service center Fixed.one told the story about how Apple helped the owner of a 2011 MacBook Pro edition to replace a broken laptop brand new MacBook Pro with Touch panel Bar. In December 2016, the company approached Anastasia with a 15-inch MacBook Pro 2011 edition. Her laptop release go haywire until it completely off, image […]

The company Zeblaze presented a new model of affordable smart watch Crystal. The device in the housing with dimensions of 49 × 41,5 × 10,9 mm (weight about 80 grams) complies with IP65 protection against water and dust. On the front side of the Crystal is touch a 1.54-inch display with a resolution of 240 […]

Google has provided developers code to bypass the security system in iOS 9, so as not to lose the advertising revenue

Google appealed to the developers of applications for iOS 9 with a proposal to abandon a key privacy features implemented in the new mobile platform Apple. It is about the encryption Protocol Transport Security App READ  How easy it is to create your My Year 2020 personal playlist on Apple Music