Together with Vladimir Borisenkov (he is the author of the text) and the Sneakerhead.ru store, we continue a series of our joint materials about sneakers.

Many of you know Apple as a multi-billion dollar corporation that makes some of the best smartphones, computers, and tablets in the world. The company is a leader in many categories, but once everything was not so rosy.

In the 80–90s, Apple executives were looking for something new for their corporation and experimented in every possible way with a variety of products. In the wake of all these experiments, quite a few unusual things appeared that were initially difficult to imagine in the Apple lineup. One of the most interesting things is Apple sneakers, which can be safely called the rarest pair and the real Grail in the collection of the Apple fan and Sneakerhead.

How did they even appear?

There is no exact answer to this question, but there are two options for the development of events. According to the first, the sneakers were made as a merch for advertising purposes, so as not to take pairs from brands. The second version says that the sneakers were created specifically for company employees. Nobody has exactly confirmed both versions, so you yourself can choose the option you like. 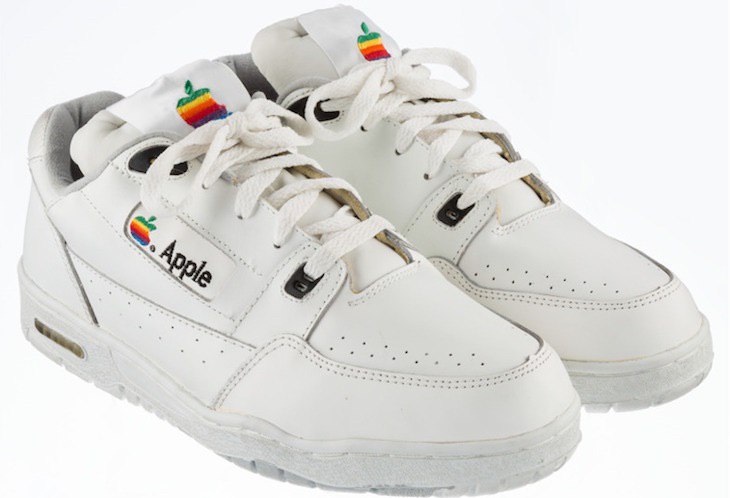 Despite the incomprehensible history of the appearance of the pair, there is a portion of accurate information about the origin of the sneakers. According to the brand’s employees who worked in those years, Apple didn’t sew sneakers on its own, but simply ordered blank pairs from Adidas without branded German branding and instead placed colorful Apple logos.

Sneakers disappeared after filming the ads, and no one heard of them until 2007, when an announcement on the sale appeared on eBay. It is also known that this pair is not the only one and several sneakers were released yet for the brand’s employees, which is proved by ads on various trading floors. Couples appeared on the Internet in several sizes at once: 8.5 US and 9.5 US. 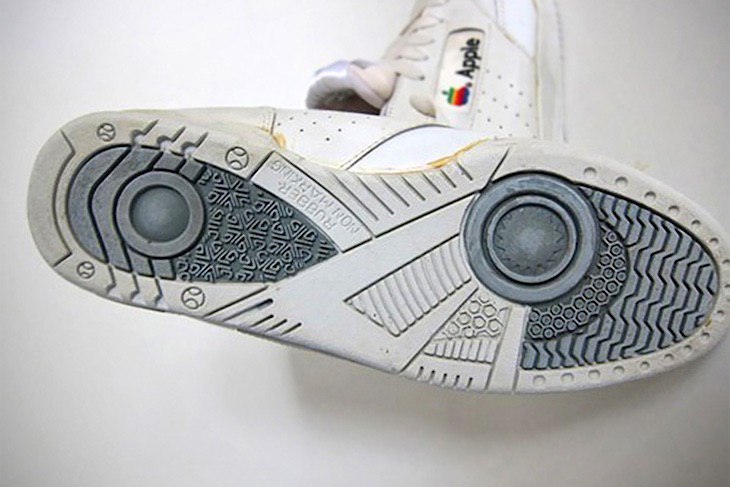 The 2007 sales post caused a stir among Apple fans. The person who decided to sell the sneakers, most likely, did not realize the whole value of the lot and put it on free sale for $ 79. The pair was bought instantly. After an auction in 2015, this couple was put up for sale for a record $ 15,000, but was never bought back. The last time the crosses were at an auction in 2017, where they were successfully sold for $ 10,500.

Subscribe to #THE YOUR PLATFORM channel, where they tell the most interesting things about sneakers and basketball.

All the problems iOS 11 Beta

Every year iOS updates bring users not only new functions and improvements, but also a lot of errors and malfunctions, which the company then struggling for several months. Any “features” this time made us the company from Cupertino? Lag 3D Touch Without a doubt, the key “innovation” iOS 11 – low FPS when you open […]

Keena will not be: Apple has canceled the release of augmented reality glasses

Rumors that Apple has been working on creating its own augmented reality glasses have been around for several years. They were expected to be ready by 2020 or 2021. But today, bad news has arrived from Asia for those who have been waiting for Apple Glass. interesting                            Apple is developing a new […]

IOS users 11 beta found a way to bypass the lock function activated the Apple. Technology called Activation Lock works on iPhone and iPad, blocking lost or stolen devices to unauthorized persons. The method demonstrated in the video, EverythingApplePro, is associated with the vulnerability of the initial screen settings in iOS 11. We are talking […]