Kaliningrad developers from the Studio Colibri Games has released the first Russian game for Apple TV. It is about the adventure puzzle game The Tiny Bang Story, which gained popularity in the world. Now it’s available on the TV screen. 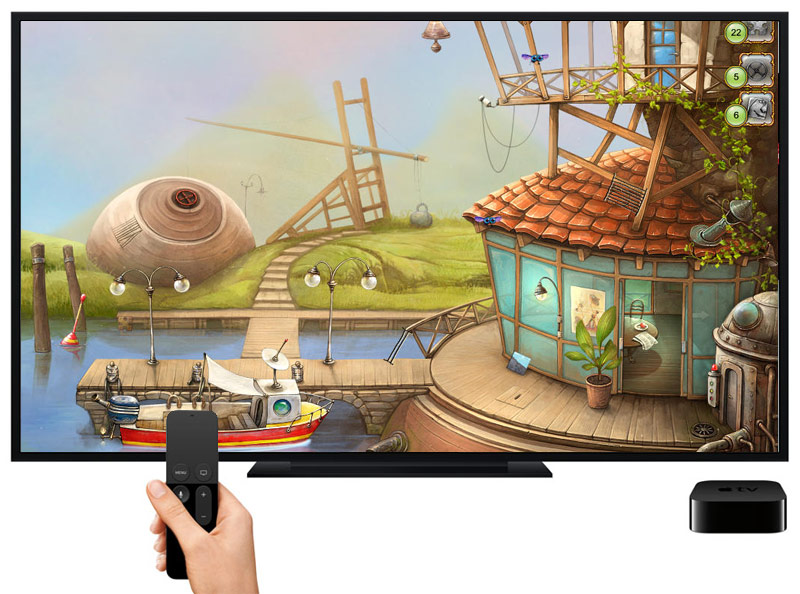 According to the creators of the game, the new format is perfect for the living room. There is no text, only man-made atmospheric picture and fun puzzles, addictive players of all ages. Team Colibri Games only three people, they are also the founders. Eduard Harutyunyan – artist, Dmitriy Sannikov is a producer and programmer, Andrey Arutyunyan – business.

Story The Tiny Bang Story began with two friends-colleagues who worked in Kaliningrad Studio casual games – Dmitry and Eduard. In 2010 they retired from main job and decided to become an independent developer, creating the first small version of this beautiful game that first appeared on Steam for Mac, then it was iPad. Andrew joined the team in mid-2011. The game has paid off in the first hours of sales, and to date, its initial budget ($40 000) “blocked” for 30 times.

“We know and understand that Apple has all possibilities to occupy a niche in the market of set-top boxes, said RG Andrey Arutyunyan. – Maybe it will not happen immediately, but as sales and new games Apple TV will increasingly be perceived as a game console. We as a developer it is always important to enter new platforms to bring the game to a large audience. If the forecasts of the global sales holds, the month spent by us on porting that will pay for itself many times over. Our years of experience proves that Apple is not perfect, but and so game developers”.

Read also:   Apple has outdone Android in the main

The team Colibri Games is in no hurry to move to the West, preferring to work at home.

“Sales of games have long been not are determined by the local markets, – said the source “RG”. Almost all developers sell their games through international platforms, such as Apple, Google, Steam, consequently the sales occur around the world. Successful developers, both large and small, do not cease to develop the game in Russia, mainly to the West migrated to the headquarters of studios (for the convenience of international business and management of intellectual property). Our Studio is located in a small, but beautiful Kaliningrad, where more than 30 studios and more than 500 people involved in the industry of game development. Not only it is convenient and comfortable to work here, but in the Kaliningrad move other game Studio from Siberia and the Far East. The proximity to Europe, sea and the beautiful city attracts all”.

Officials in Russia have detained for receiving a bribe MacBook

Perm senior official is suspected of receiving bribes in the form of MacBook, according to the publication Mediazavod. Model MacBook is not given, but named the price is more than 100 000 rubles. For laptop Apple official had to sign the acts of acceptance. SU Investigative Committee for the Perm region said that in relation […]

Meizu started selling in Russia, a budget clone of the iPhone 4s with a 13-megapixel camera and capacious battery

2 November in Russia started selling the Meizu U10 – a new Android smartphone, reminiscent of the design of the iPhone 4/4s. The device is made in the style of Apple devices, but is equipped with 5-inch screen with a resolution of 1280 × 720 pixels. At the start of sales of Meizu U10 available […]