Have you ever wondered why your iPhone slows down after a few years? Why the once-amazing device becomes a brake and struggling to perform the simplest tasks, and loads applications? The answer is in the software of the Apple, and it is the cornerstone of the company’s strategy aimed at millions of people bought new iPhones. At least, so says the Huffington Post journalist Timothy Stenovich. 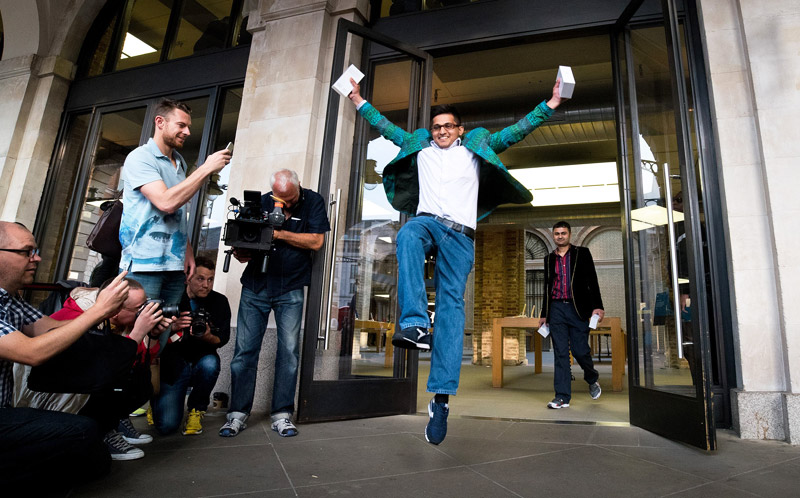 As the chart from Statista shows, each time after the release of a new model of Apple smartphone on the Internet there is a surge of search queries “iPhone slow” (“slow iPhone”). Then the number of these requests decreases slightly, but then abruptly jumps when a new model.

This can have at least three explanations. First of all, human psychology. The user may feel that the smartphone is working properly until then, until the rumor about the release of a new version of the device. Such information is likely to cause a person to think about what his smartphone, perhaps is not so good. Another possible reason is the long life of your Apple devices. This is true not only for smartphones but also for tablets and multimedia players. The longer they are, the more “digital garbage” collects software. Numerous files and conflicting applications lead to the fact that devices are really starting slower to perform its functions.

Finally, the owners of previous models installing the new iOS version, which usually comes out with a new model of phone, and as a result it really starts to run slower due to increased system requirements firmware.

“If you have an iPhone, which is more than two years, and you, as recommended by Apple, has updated the operating system a couple of times after purchase, but now you probably want to smash this phone against the wall. He certainly became slow and thoughtful. …Apple just makes for new iPhone a new system in which more functions, more memory requirements and CPU etc. as a result, it does not work on old iPhone,” writes Stanovich.

It is highly unlikely that Apple slows old iPhone specifically to force people to update. The company just releases a new OS with more features, more memory requirements and CPU etc. as a result, it works worse on less powerful devices. 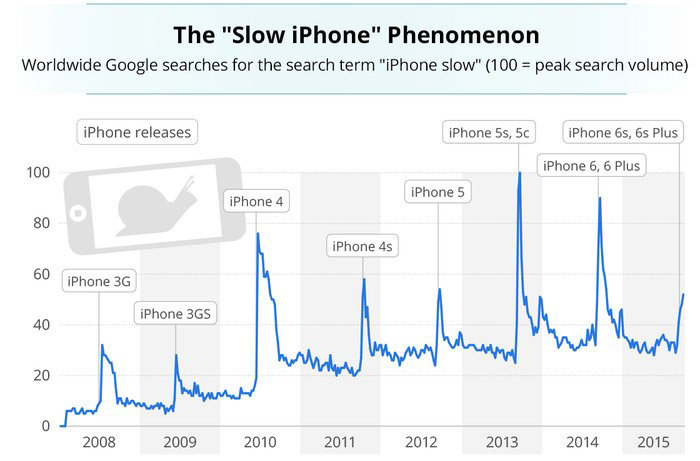 But given the chart Huffington is possible to find another interesting detail: even if you ignore the peaks and falls, the number of requests for “brake” iPhone still slowly but steadily increasing during the entire time since 2008. And this trend is alarming, because it suggests that the iPhone regardless of the model considered slow, more and more people. And that should make Apple a serious look.

On Tuesday, Samsung officially unveiled its new top-end smartphone with a stylus Galaxy Note7. Device, the presentation took place in new York on August 2, intended to compete with the upcoming flagship line of Apple smartphones. Galaxy Note7 equipped with a 5.7-inch Super AMOLED display with a resolution of 2560×1440 pixels, curved on two sides […]

Analysts have lowered the forecast on sales of iPhones this year, predicting a sharp rise in 2018

Morgan Stanley analyst Katy Huberty made some changes in their forecasts about the future of Apple and iPhone smartphones. The forecast for sales has been reduced, though insignificantly — by only 3%. According to analysts, Apple’s revenues from iPhone sales in the 2017 fiscal year, which ends at the end of September 2017 calendar year […]