The App Store became available for free Cycloramic app that is popular with iPhone users. This program allows you to automatically create panoramic video 360 degrees with the help of the vibrating motor. 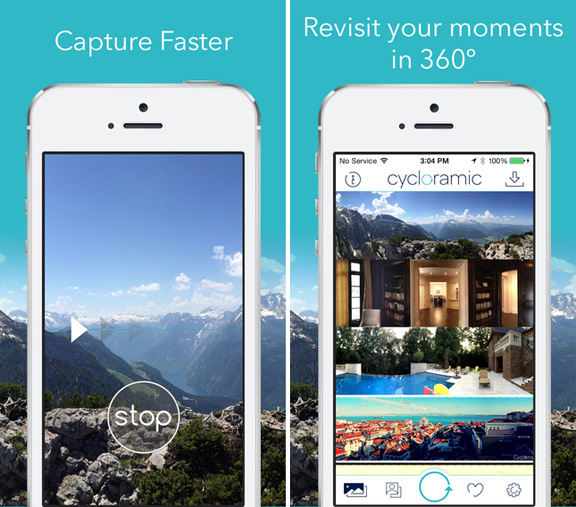 Using Cycloramic possible and photograph, and to stitch the panorama, and create a virtual 3D-tour. IPhone owners can use automatic shooting mode of the panorama: the application will include a vibrate mode and make the desired number of shots, each time turning the device to the desired angle.

In the case of the iPhone 6’s proprietary developers used in a special way. You must use the power adapter that comes with the phone, put it on the table and place the device between the plug pins. Due to the vibration of the “six” will rotate no worse than the previous generation model with planar faces.

Enough to run Cycloramic, press “start” and start shooting. The phone will complete one or more revolutions (configurable) around its axis and stop. After the completion of the finished video appears in the photo library of the device. This trick works not only on desktop but also on softer surfaces, which is shown in the video from the developers.

For a limited time Cycloramic you can download for free. Regular price apps – 129 rubles. The promotion will last for 24 hours.

How to quickly find the desired setting in iOS 9

In iOS there are hundreds of various settings for each operating system partition. They are all grouped in a single application. Although a breakdown of the menu is much more logical than on other platforms, find rare options is sometimes extremely difficult. In iOS 9, Apple solved the problem with quick access to settings. Operating […]

Six months with Fujifilm X100V: is a “soap box” necessary in a world ruled by smartphones?

A little over a decade ago, the photography world began to change dramatically. Then smartphones entered the race for image quality. And if at the beginning of the tenth it looked rather strange, then by today most people will not even think about whether they need a camera. Of course not – they have iPhone […]

According to the publication Bloomberg, Apple is considering the purchase of units Toshiba for the production of microchips. The cost of the proposed transaction is located only 3 billion dollars. If the data is confirmed, and Apple do decide to buy the business of manufacturing of processors is Toshiba, it will be the largest transaction […]