Sources familiar with the development of iOS 9, talked about the new features in the forthcoming release of the platform. As it became known, the new software for iPad will support multi window mode. Users can divide the screen into two parts for simultaneous work with two applications. 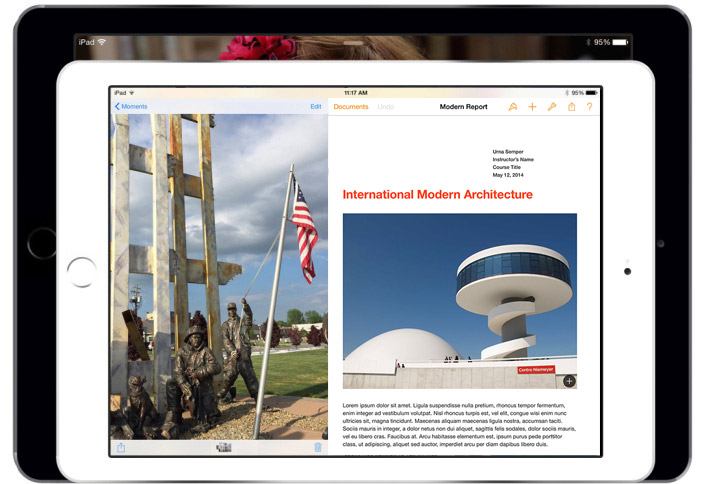 On the preparation of multi window mode for iPad was reported last year. In particular, the support found in iOS 8 independent developer Stephen Trenton-Smith. “In case someone had doubts in the code… the home screen iOS 8 there is a line to run two programs simultaneously: in sizes 1/4″, 1/2 “or 3/4”, – he wrote. Open on one screen tasks are displayed in the multitasking drawer as one application.

Apple was planning to add the feature on devices with iOS 8.1, but then abandoned the idea. The technology required improvements, but the attention demanded iPhone 6, iPhone 6 Plus and Apple Watch. Now Apple is ready to introduce her formally at a conference for developers WWDC.

It should be noted that similar functionality is available in the competing manufacturers. Moreover, not only tablets, but also smartphones. Now the iPad allows you to access the application only in fullscreen mode. Multiwindow mode will greatly simplify the interaction with multiple tasks. For example, the user will be able to keep before the eyes of the two tabs Safari or Pages document and paste the content (text, video, photos) between programs, etc.

According to available information, a multiwindow mode is being developed with a view to display a 12.9-inch iPad Pro, but it will be available also on iPad Air. Will it be supported iPad mini, is still unknown. Large-size iPad models, as noted, are listed in the Apple under the code names “J98 and J99” is the model of Wi-Fi and wifi + LTE.

Another “trick” iOS 9 will be a built-in system accounts. Now the iPad and other iOS device are purely personal gadgets are designed for use by one person. All settings, Wallpapers, placement of icons is available only in one version, thus severely limiting their use.

In iOS 9 Apple developers implement on devices long-awaited dream about accounts. After logging in to the operating system under your account, each user will see on the screen of your own settings, placement of icons, games and apps. The exact date of the launch of this feature, the source is not reported, her debut could take place in iOS 9.1 and even in iOS 9.2.

Apple is preparing to unveil the iPhone 7 and iPhone 7 Plus, and in the Network there are new leaks from the production chain of the company. This time beyond the walls of Cupertino leaked components of the new flagship. At “spy” photos depict schematic drawings and molds for the production of new smartphones Apple. […]

Apple will introduce its new flagship iPhone only at the beginning of autumn. However, today, thanks to the leaks we can get an idea about what will be new, what model will differ from its predecessors. Jailbreak developer known online as Kyoufujibaya, found in the code of iOS references to information about the lack of […]

Apple, Samsung and Microsoft stood on the account for the payment of a “tax on Google” in Russia

The Federal tax service (FTS) has identified Apple, Google, Microsoft, Samsung Electronics, Netflix and a further 12 companies for the payment of a “tax on Google”. This follows from the transcript of the meeting Prime Minister Dmitry Medvedev with the head of the FTS Mikhail Mishustin. From 2017, Russia has a law to levy VAT […]