Apple has several large tablets, all of them are united by iPadOS, but the devices cost differently. The coolest and most sophisticated series is the iPad Pro, then comes the iPad Air line, and the iPad is considered the simplest. For the minimum money by Apple's standards, we get a high-quality device with a long term of use: updates are released regularly for several years.

Everything you need to know about Apple iPad (2020)

After removing the protective film from the box in the package, you can find a small manual, a couple of branded stickers, as well as a new 20W charger and USB Type-C to Lightning cable. 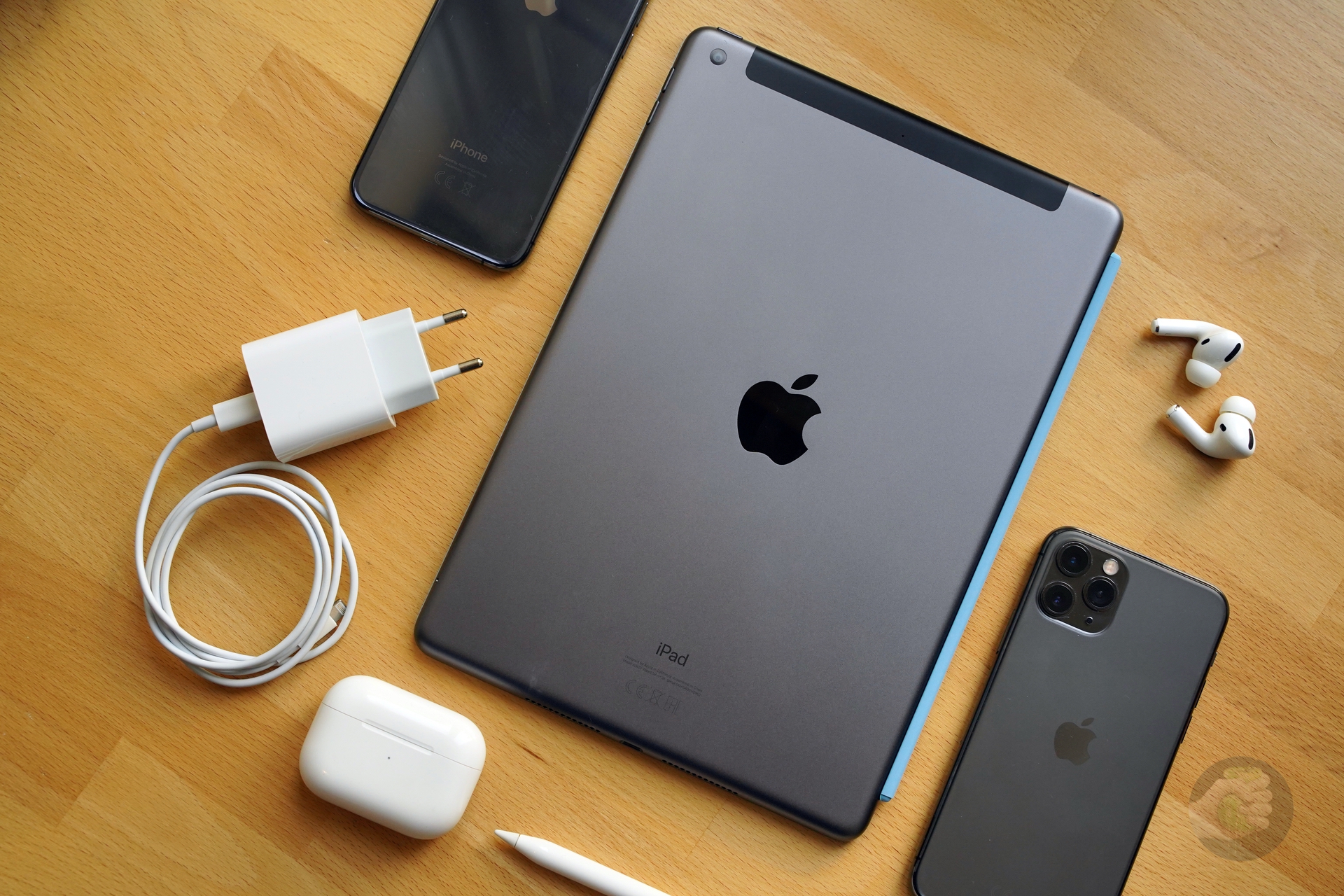 The new iPad looks like the old iPad, which in turn follows the design of the older iPad. The appearance of the base Apple tablet has not been updated for several generations, except for the increase in screen size, everything has remained the same. Aluminum body, wide-bezel and air-spaced display, permanent Home button with fingerprint reader. 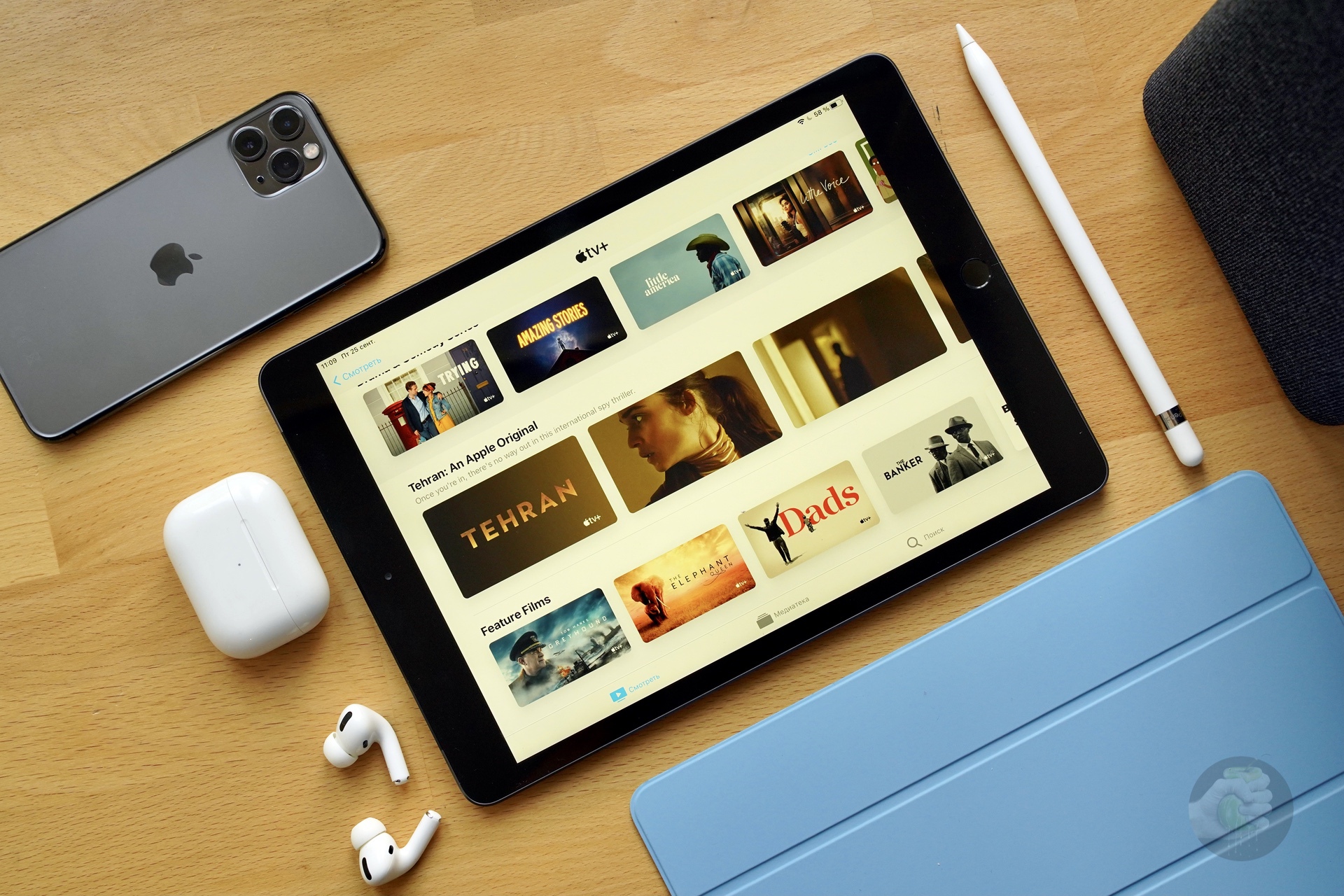 You still need to choose from the three colors that have become classic: silver, dark gray and gold. It's a shame they didn't add some fun new colors like the iPad Air, but that's Apple's will. 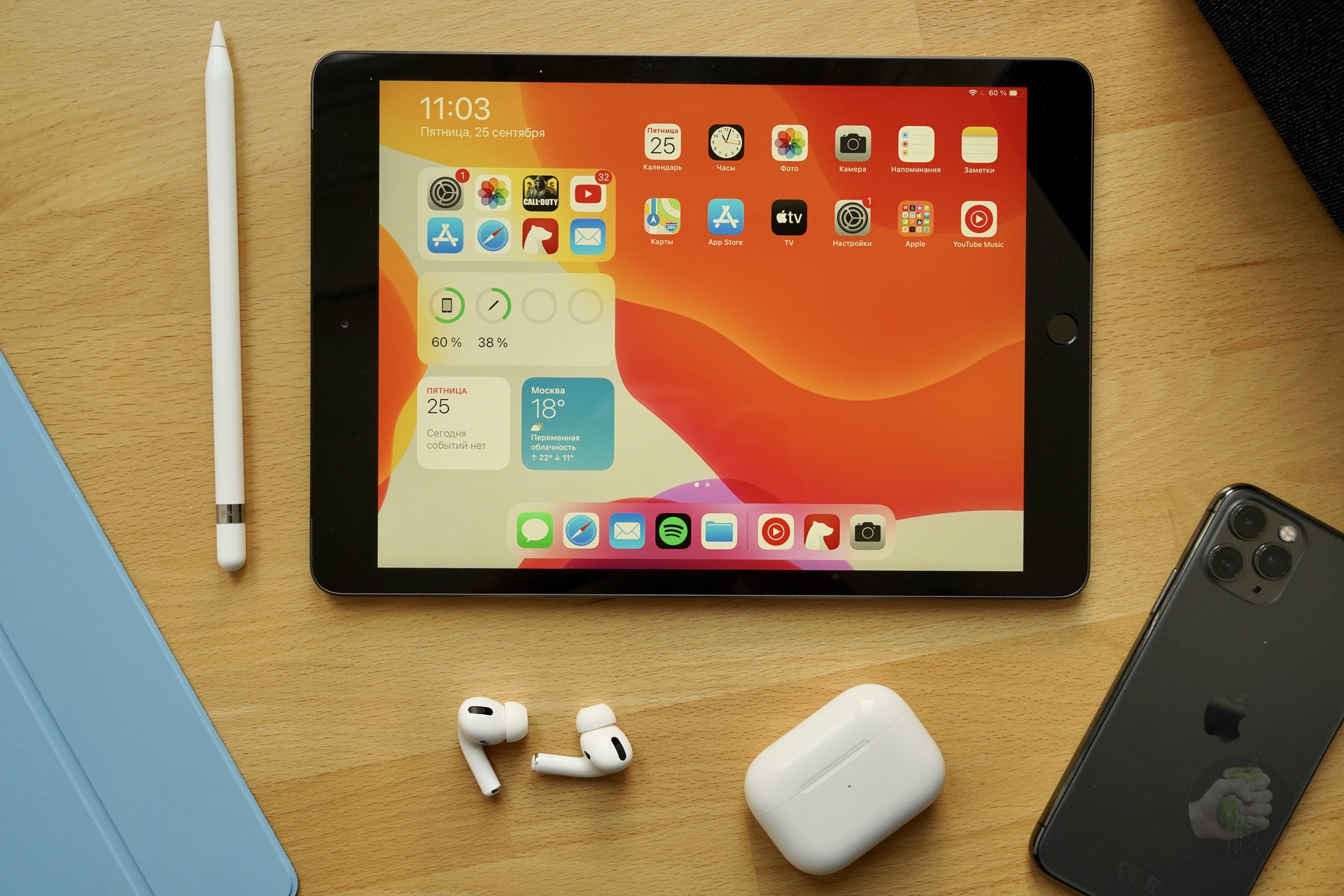 It only remains to add that the dimensions of the relatively old generation have changed slightly, but these are such trifles that only a gadget expert will notice.

On my iPad Pro, the oleophobic coating has peeled off for a long time, and when I picked up the 8th generation iPad, I again felt this indescribably pleasant sensation when my finger glides so smoothly over the surface.

If we talk about screen characteristics, the iPad (2020) uses a 10.2-inch screen with a good margin of brightness, high-quality picture and excellent sensitivity. Unlike more expensive Apple tablets, there is an air gap between the matrix and the protective glass – a feature of the simplest iPad model. 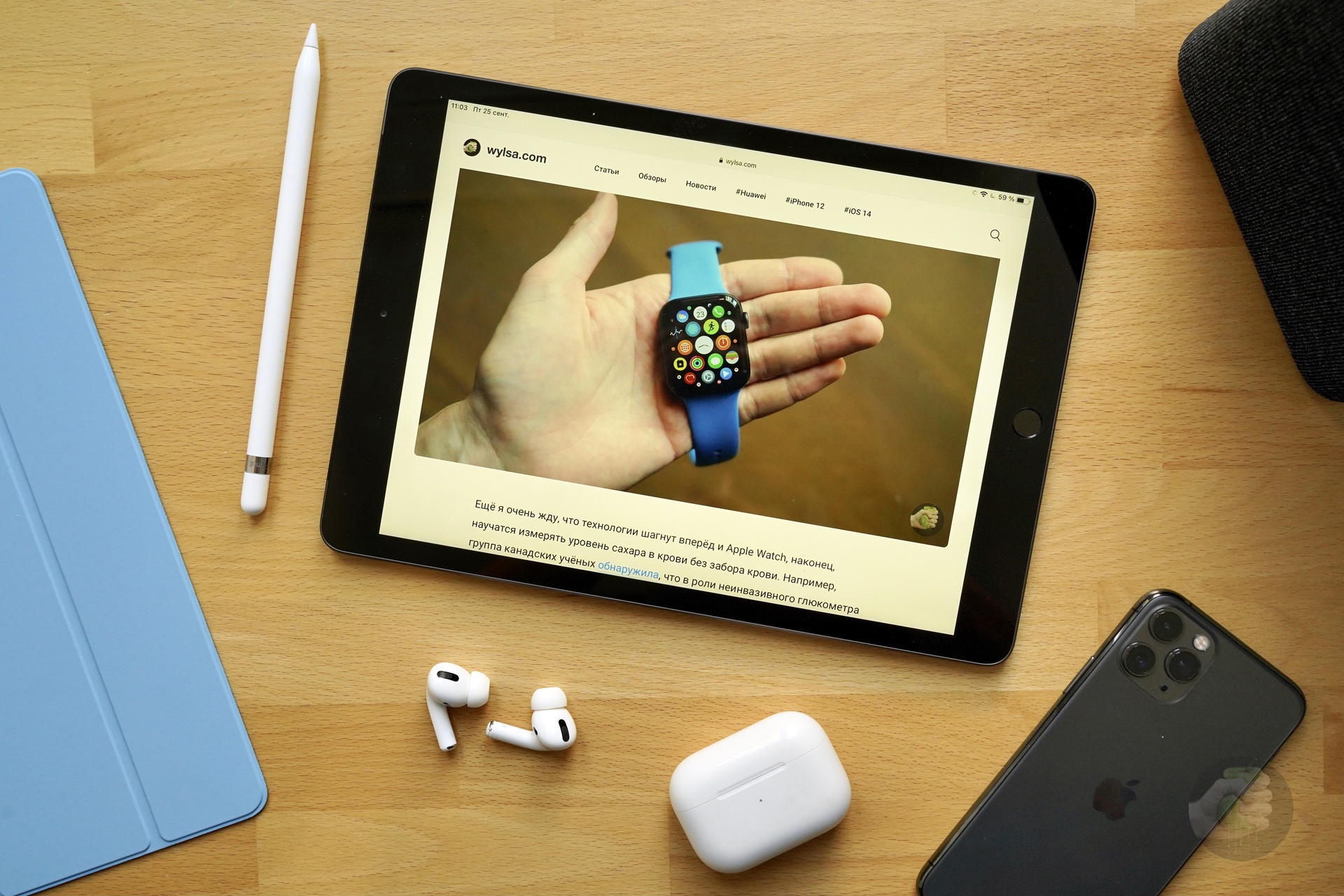 There are no bells and whistles like the True Tone mode or 120 Hz support, there are minimum options, but you don't have to overpay.

With iOS 14, Apple has given special attention to data privacy by showing which apps and sites want to know more about you. 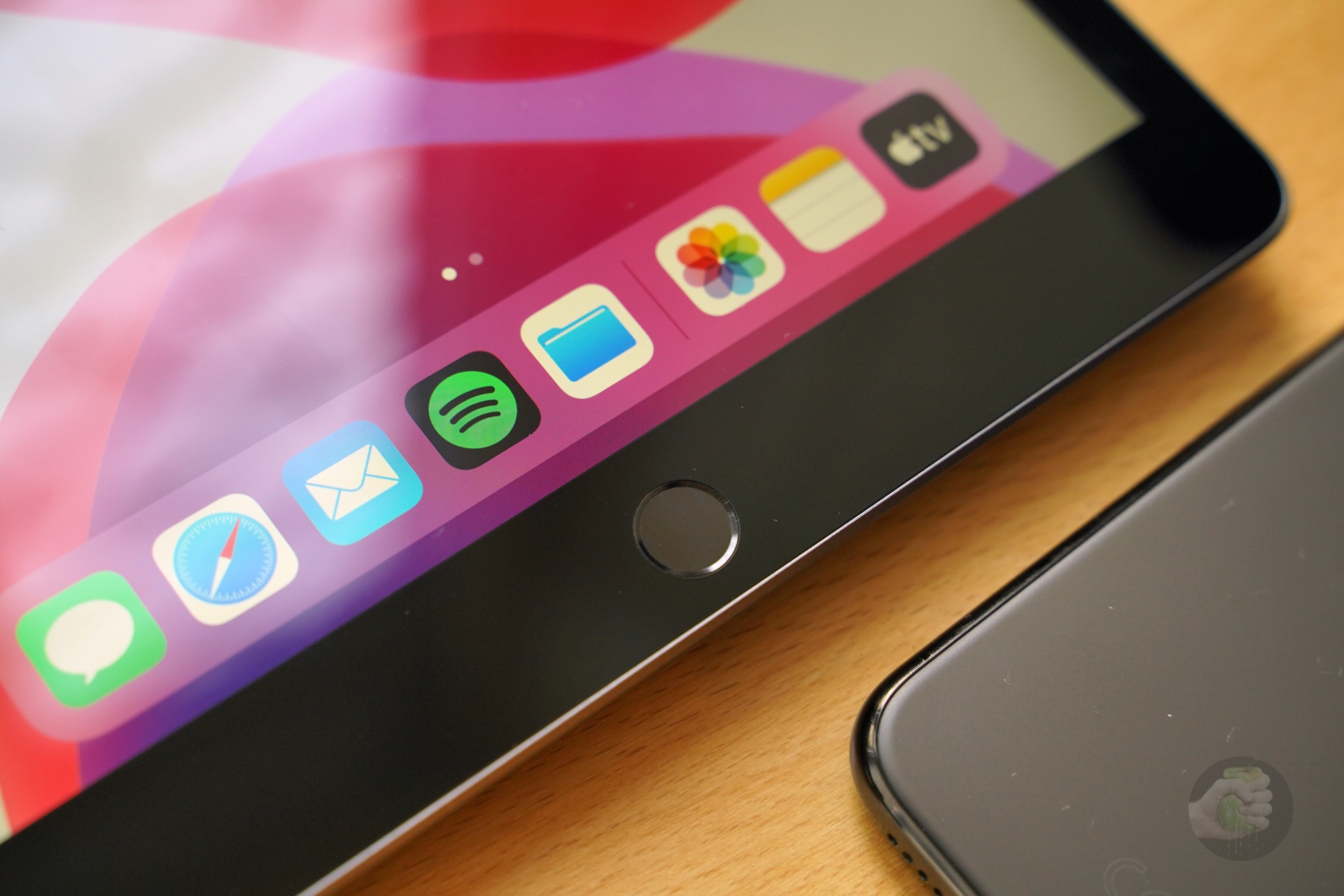 The fingerprint scanner under the screen, tested for years, is responsible for the safety of information in the tablet. Works perfect, fast and smooth. It may not be as technologically advanced as the Face ID system, but to be honest, life is not much worse without face unlocking.

Read also:   About Everything Interesting This Week # 19: Don't Wait For New Ports On The MacBook And Keanu Reeves In The Spongebob Cartoon

The new iPad (2020) has an Apple A12 processor, the same processor used in the iPhone XS, iPhone XR and iPad Air 3. The tablet easily copes with any task, you can play demanding games or work simultaneously with several applications on the same screen – there will be no problems … Against the background of the old generation, where there was no special power reserve and it was difficult to play with high graphics settings in top shooters, unequivocal progress.

I don't really like shooters like PUBG, but it's always nice to play your favorite strategy – Company of Heroes is going great, I told about it earlier:

Review of the great game Company of Heroes on iPad

How long Apple will update devices with such a processor, I will not say for sure, but given how long the company's phones and tablets receive fresh versions of iOS, we can safely count on a period of 3-4 years.

The amount of memory has not changed: the iPad still gets a modest 32 GB of memory in the standard version, and if you pay extra, it will already be 128 GB. In my opinion, you can live with 32 GB if you do not play on a tablet, because toys are frantically devouring memory. Call of Duty requires 2.78 GB, Company of Heroes – 4.45 GB, GRID – 4 GB, I took "heavy" games as an example, but there are a lot of games in the App Store that eat up about 500 MB, but it's better to have it in mind.

If you store data in the cloud, use streaming music services, watch videos and work with documents in the same way, then you will not suffer much. In the same case, if you are choosing a tablet for games for yourself or for a child, then it is better not to save money and pay extra for extra space.

The tablet retained a 3.5 mm jack, there is no headset included, but if necessary, you can connect your favorite wired headphones. Although, most likely, in 2020 you already use Bluetooth-headphones and the "mini-jack" already seems to be something old-fashioned. 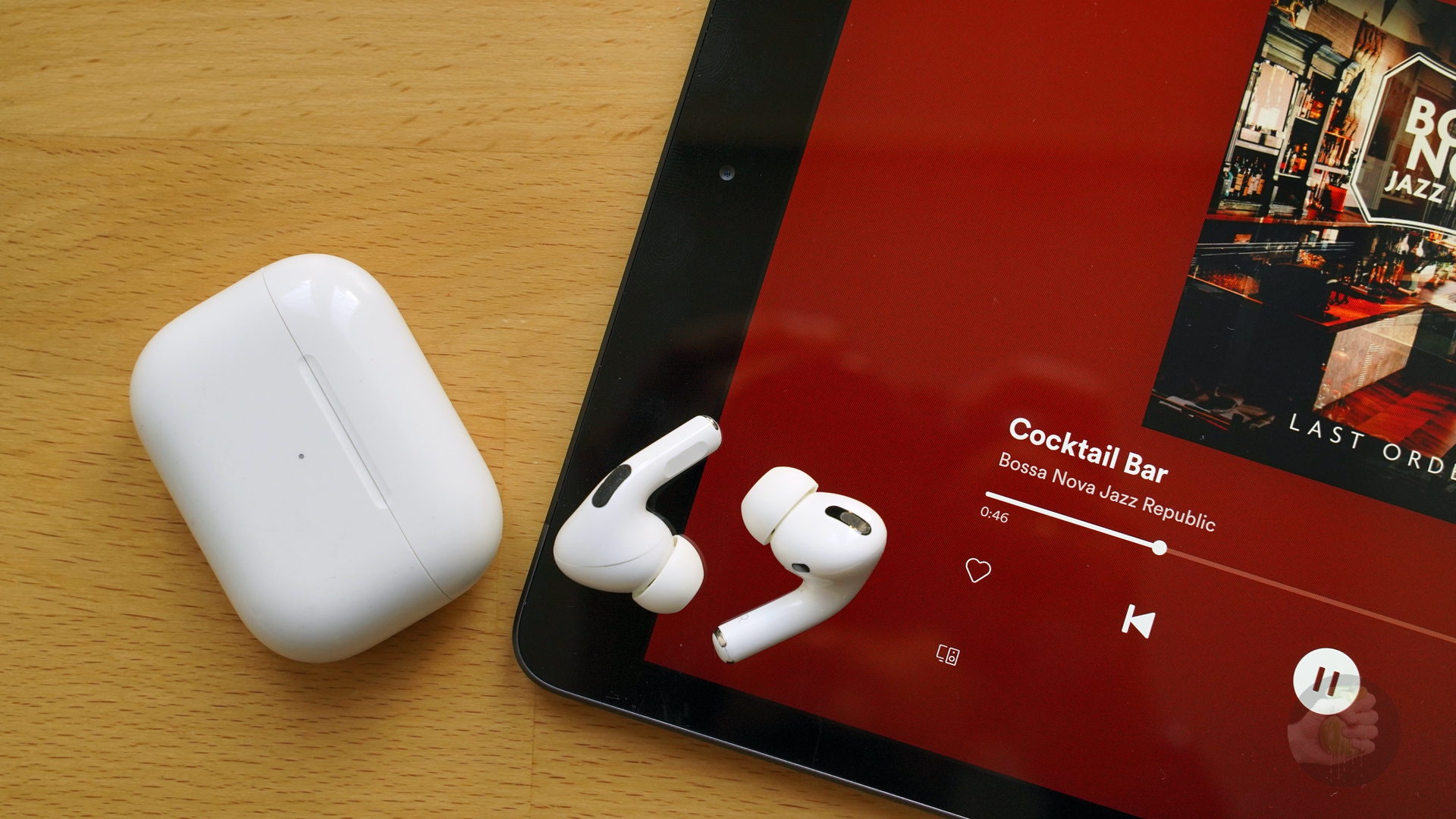 The tablet has two speakers, they are located on the bottom end – in the same place as the Lightning connector. The speakers are loud, they play well – but because they are on one side, there will be no volumetric effect, as on Pro-tablets. However, considering the price of the iPad, this is forgivable.

Read also:   Disney was ahead of Apple by creating a room with the possibility of wireless charging devices [video]

A Smart Connector is located on the side, with its help a cover with a keyboard is connected, then the tablet turns into a mini-laptop. I have been using Smart Keyboard for a long time, I type a lot, so the accessory is simply irreplaceable, convenience compared to touch input is on a completely different level. 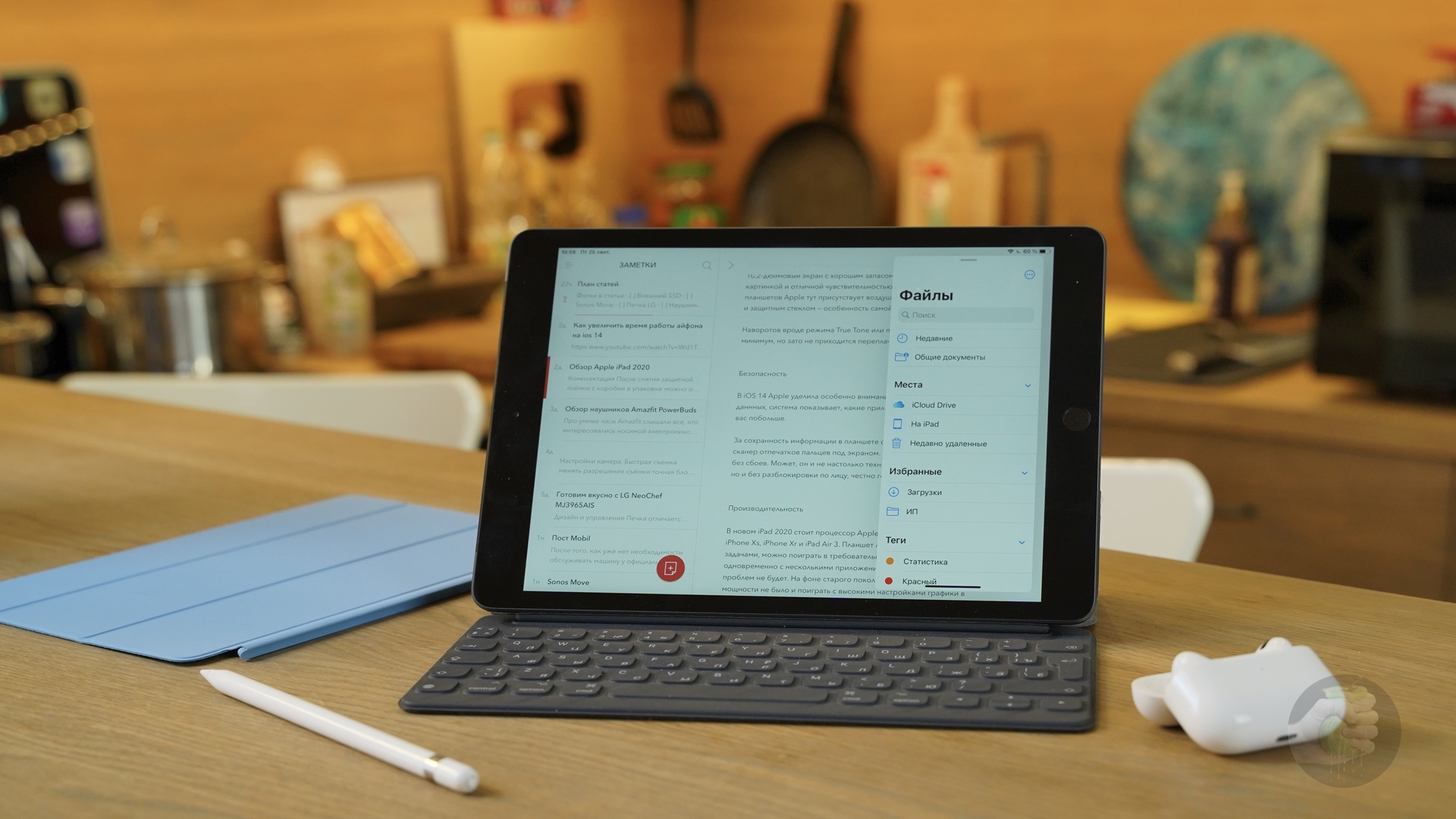 You can also shell out and buy a first-generation Apple Pencil for drawing or taking handwritten notes. There are tons of different stress coloring pages on iOS, not to mention advanced illustration apps. Let not everyone have the talents of an artist, but the very possibility of using a separate accessory pleases – you can even slide your finger across the screen, but it is still more pleasant to work with a pencil. 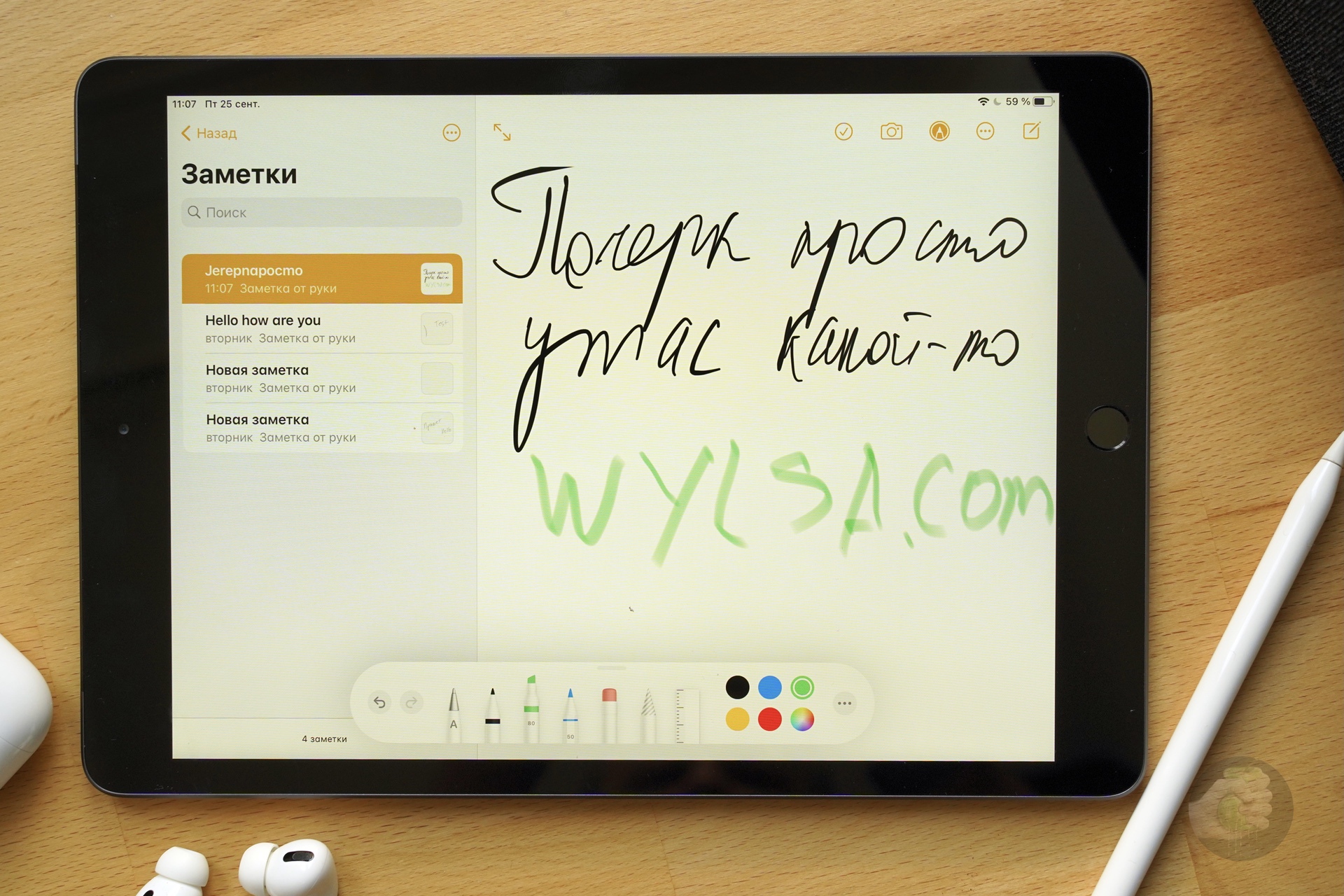 It is convenient to view photos on iPad, edit them before publishing them on social networks. An adapter for an SD card will be an indispensable piece, I recommend it to everyone who is fond of processing. 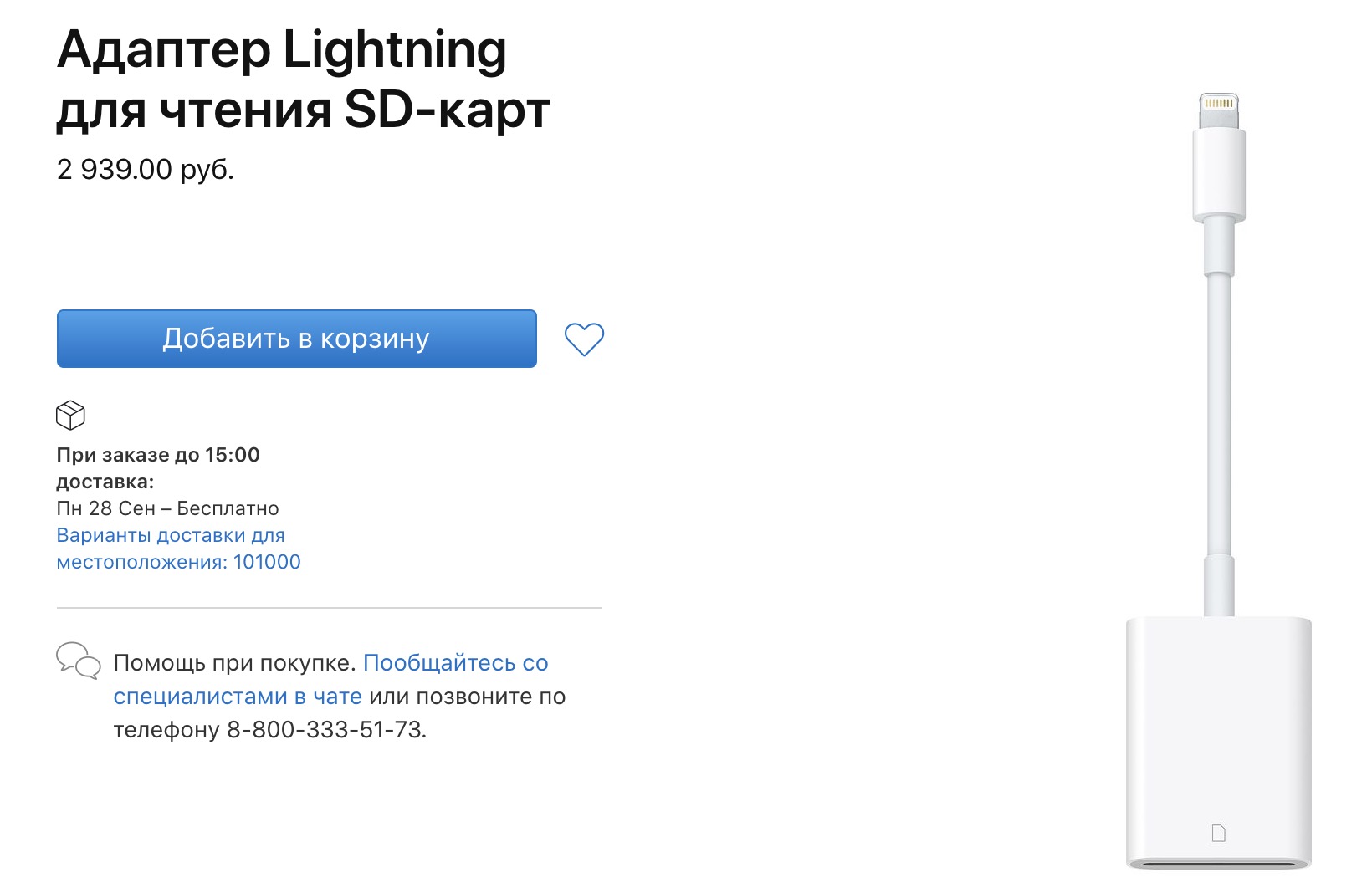 The tablet is still sold in two versions: with and without a physical SIM card. The surcharge for the ability to use a SIM card is decent, more than ten thousand rubles, and this is a third of the tablet, for a minute. 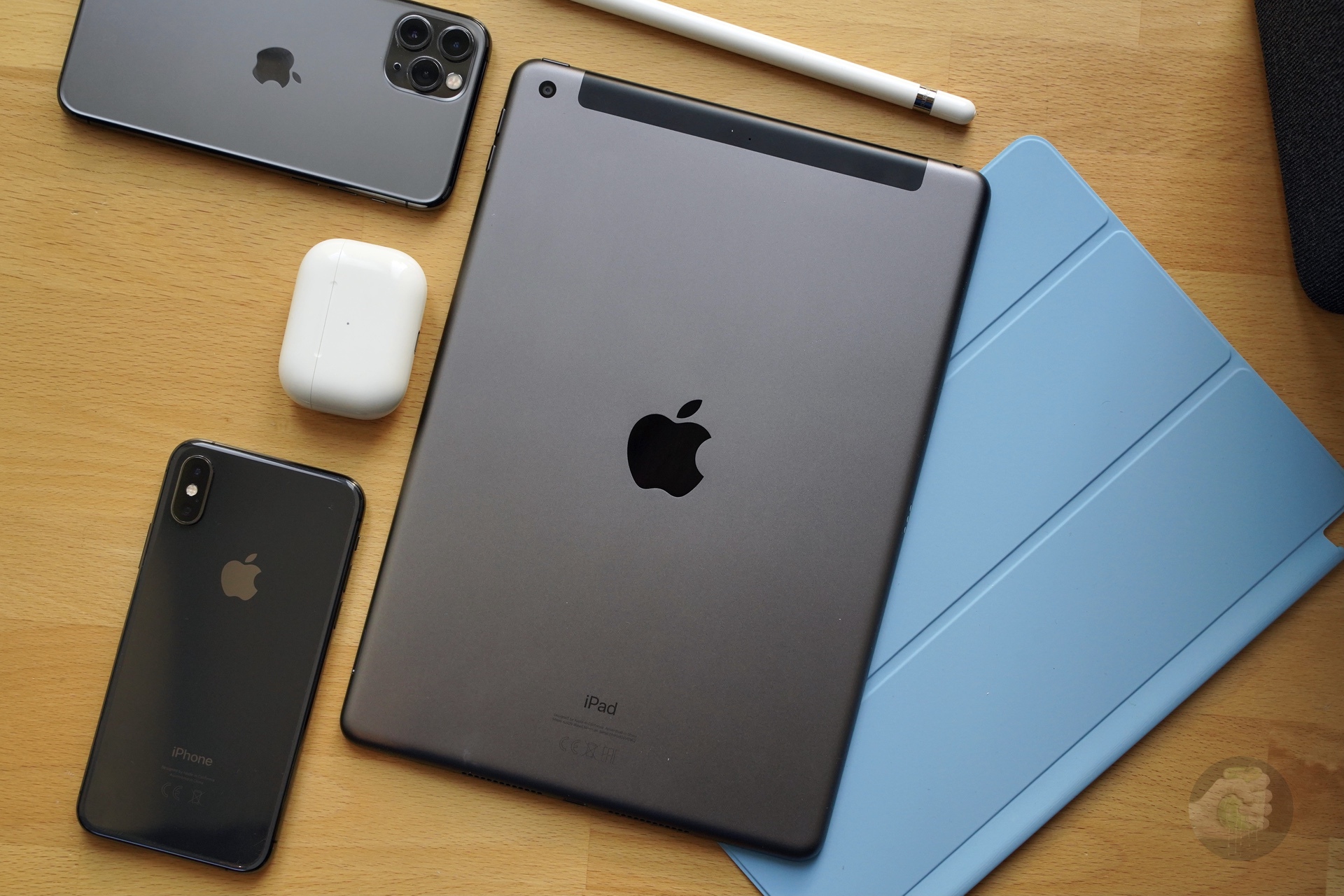 Considering that, if necessary, the Internet can be distributed from the phone by connecting the iPad to it for a while, the issue is solved simply. But if you often use your tablet outside the Wi-Fi zone or plan to load it with navigation, then you need to take the version with a SIM card.

The coronavirus year 2020 has shown that the front camera in the device is a very useful thing during calls. Alas, the iPad (2020) cannot boast of the picture quality: the front camera is just antediluvian at a modest 1.2 megapixel. 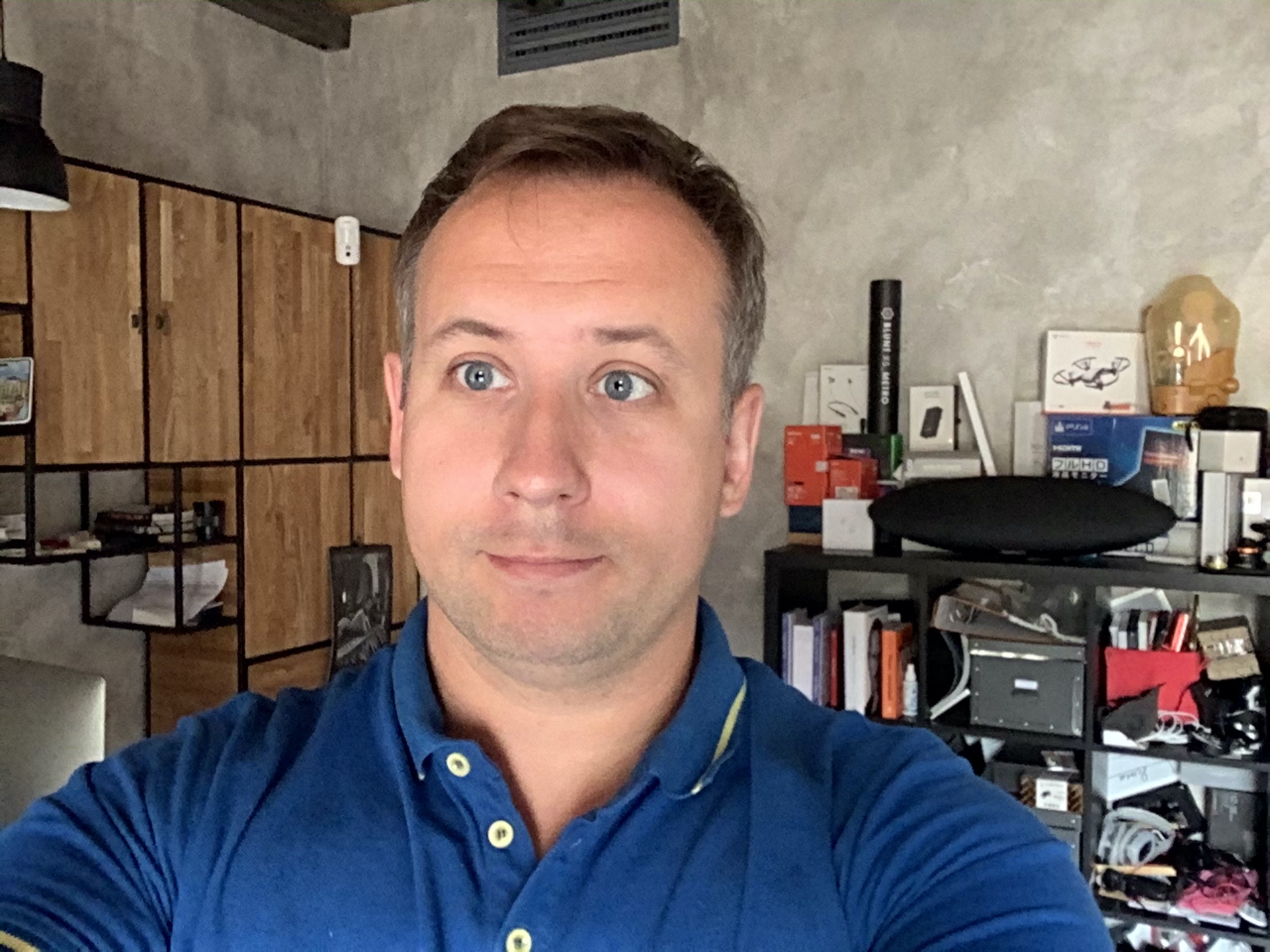 The main camera for the tablet is a secondary thing, the iPad takes pictures well. Here are some examples: 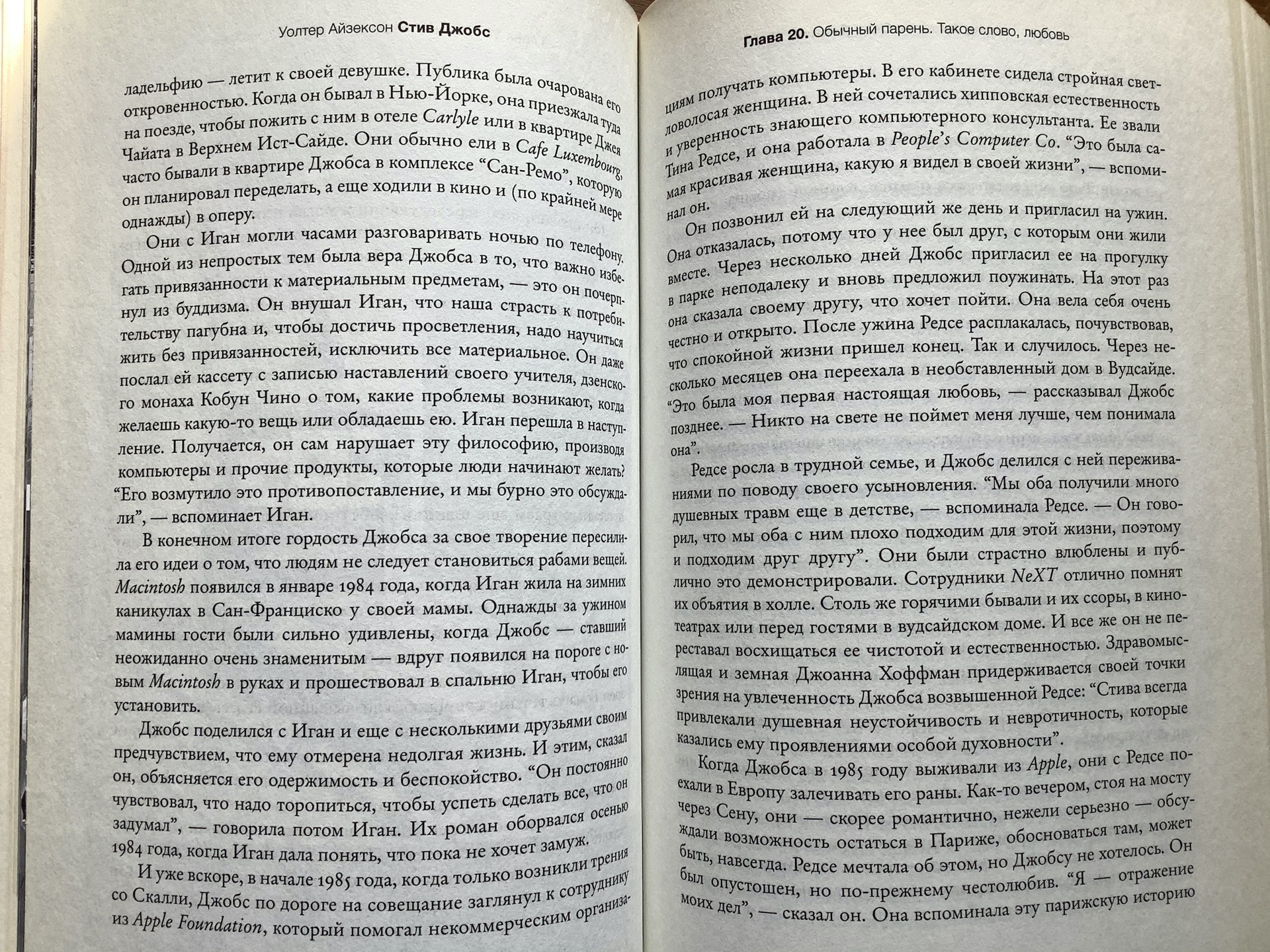 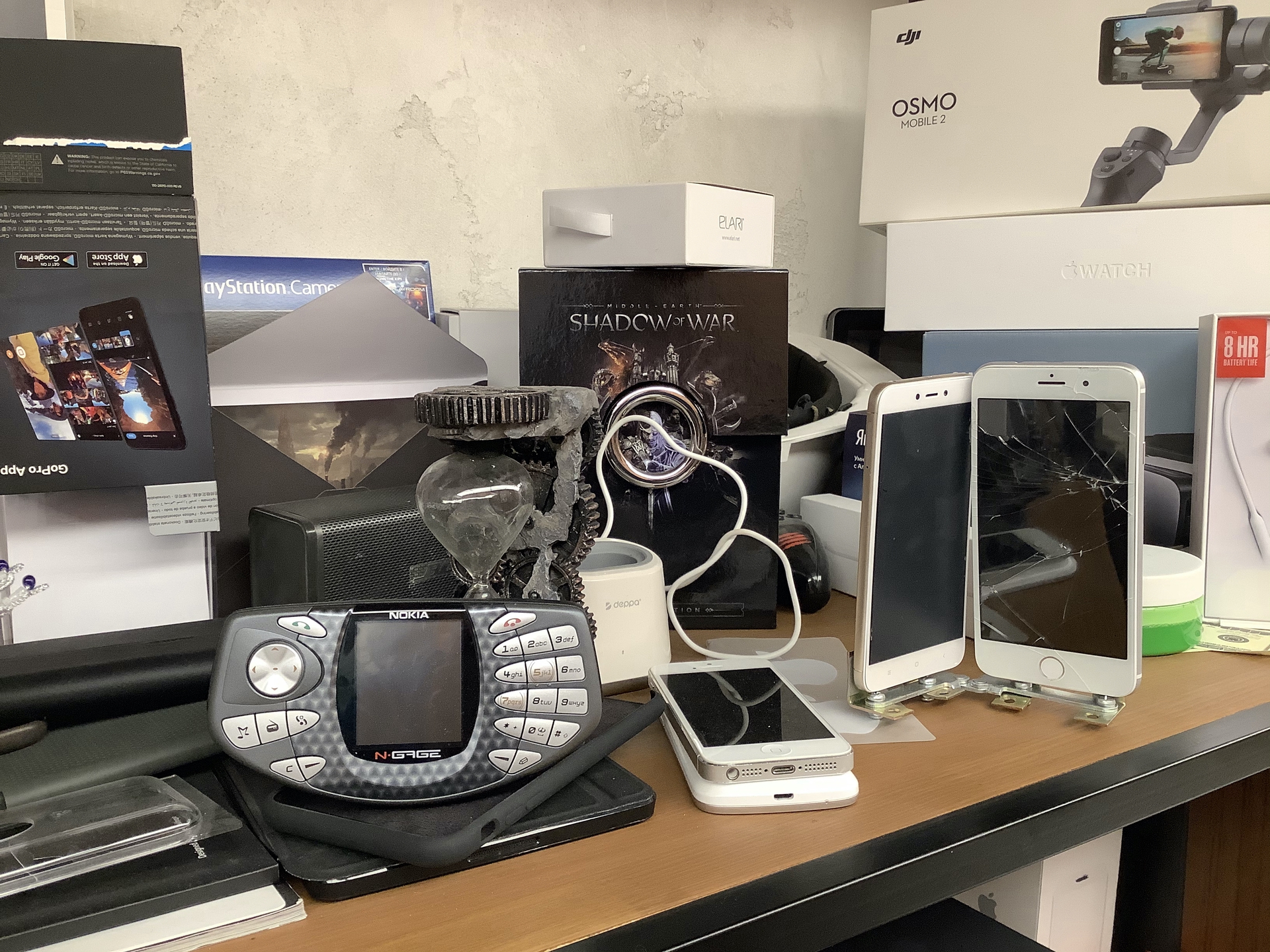 IPad video writes only in 1080p, alas, 4K is not supported. While you’re unlikely to worry too much about this, this feature is rather optional.

It's nice that the new iPad has a new charger included. Now the tablet is sold with a 20 W power supply instead of 12 W, and with it we also get a USB Type-C cable, and not with Lightning, as it was before. Considering that Apple is rarely generous with such things, this is a very welcome innovation. 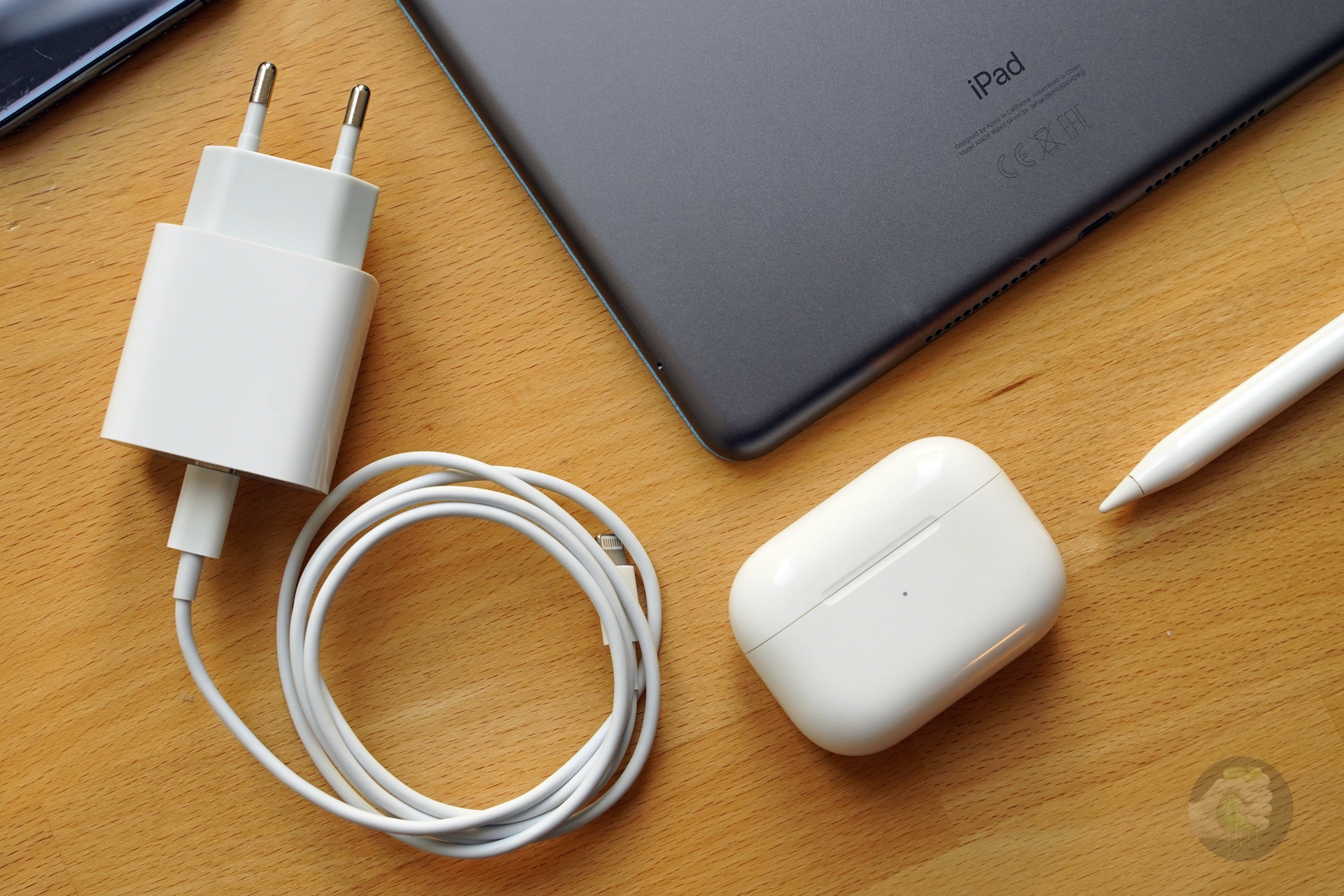 How often you have to charge the tablet depends on your work scenario, with me, with a moderately active mode, it lives on one charge for about three days. This is with games, YouTube videos, browsing sites through Safari. If in the evenings you only read on the tablet for an hour before bedtime, then the charge is enough for a week, and there will even be a reserve.

IPad tablets have always been a great example of well-optimized devices, this generation was no exception, the new product has been working for a long time.

Against the background of last year's iPad (2019), which was sold for 27,990 rubles, you can see an increase in price. Now iPad (2020) for 32 GB is on sale for a couple of thousand more, the price in Europe has not changed. But here the fluctuation of the exchange rate is already to blame, it is useless to blame Apple for this.

The official prices for iPad (2020) in Russia are as follows:

The world of tablets has become small: in addition to Apple, interesting tablets are offered by Huawei and Samsung. Once top-end tablets were produced by Sony, but it did not manage to consolidate its success, and ASUS also curtailed everything. As a result, the choice remains between the iOS or Android ecosystems, and here everything comes down to money. 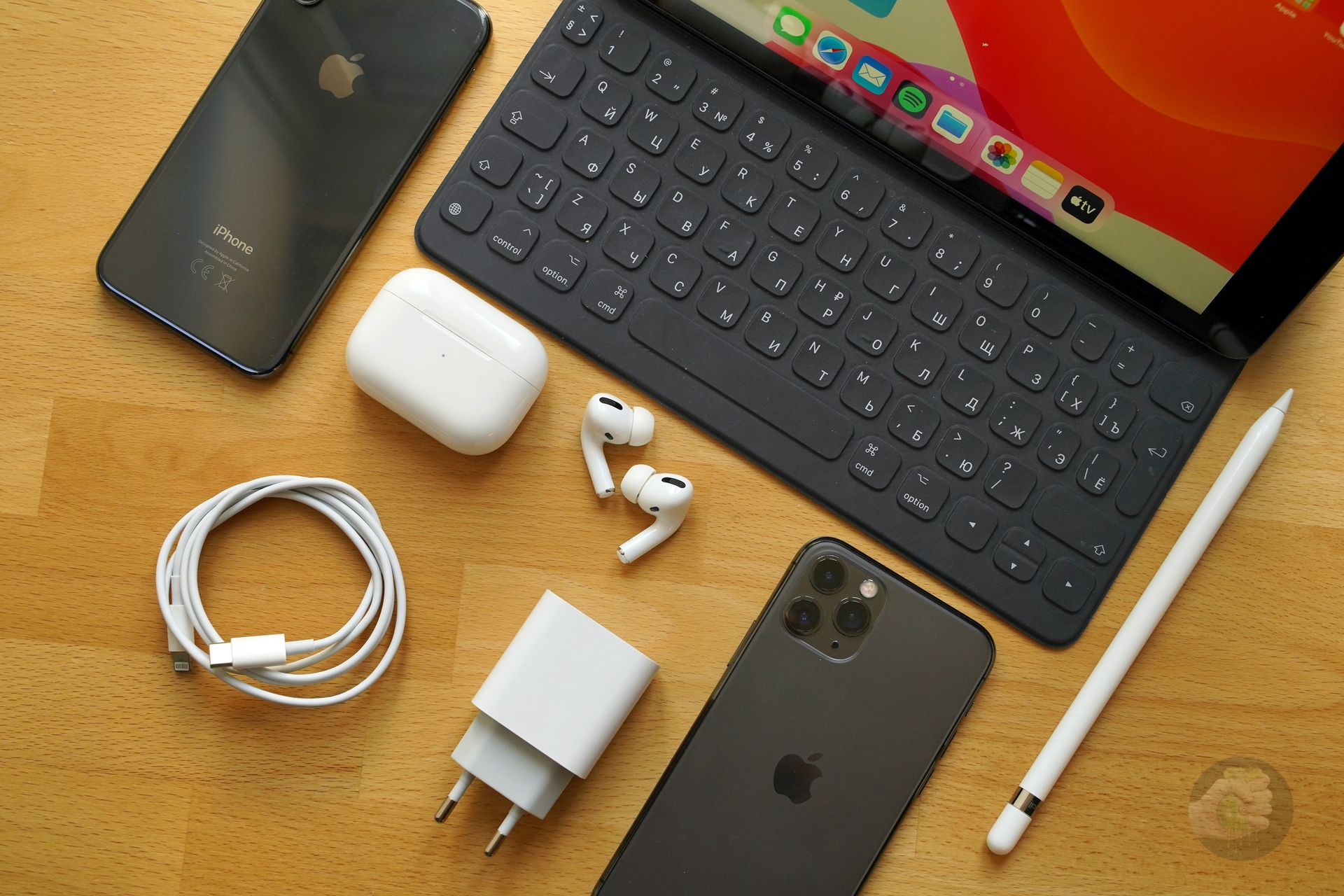 In terms of value for money, the simple but practical Apple iPad was and will be the best deal. It is simpler than the older models in terms of characteristics, it does not have such a cool sound, the design is boring, but why pay more if the iPad is mainly used to surf the Internet? Moreover, the latest iPad generations are becoming more interesting every year.

Better performance, you can connect Apple Pencil and keyboard, and if you want something more, then there is the adorable iPad Air and the top-end iPad Pro. Everyone has their own use case, but the basic iPad has excellent iPadOS capabilities, it is interesting and convenient to work with the system, and the software updates are exactly the same as for older models.

Expert: the output of the Apple electric car can cause irreparable blow to the Russian economy

The arrival of Apple in the automotive business will be successful and will be a real shock for the industry. It will mark the end of the power oil, says financial analyst, chief investment officer Investment Management Associates Vitaliy Katznelson. The Corporation that produces computers, smart phones, tablets, watches, the highest level of trust among […]