Flagship smartphone Apple has incorporated a number of innovations. One of them is the housing made of durable aluminum alloy 7000 series. iPhone 6s Plus does not bend, and a 4.7-inch device has become much stronger. 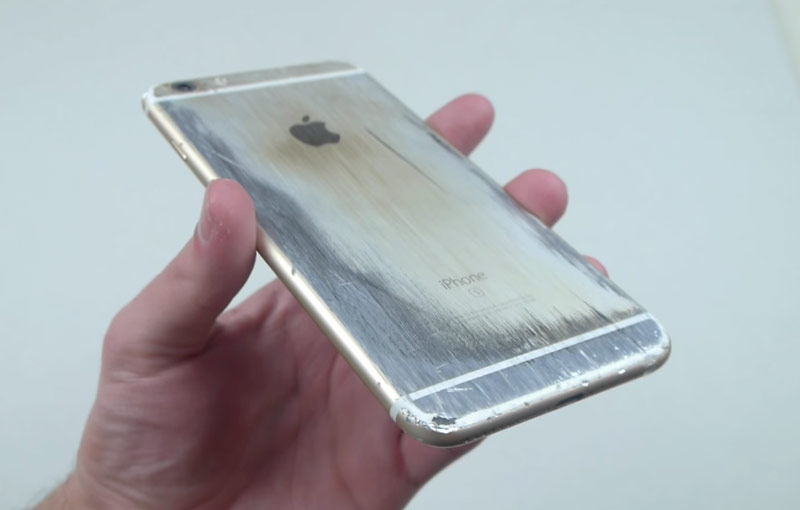 The Creator of the popular YouTube-channel TechRax has come up with yet another show for its users, lovers and haters of the iPhone. He experienced iPhone 6s Plus on the strength during the “experiment in extreme friction”. The device is fixed by means of a metallic holder to the vehicle so that the body pressed to the pavement. Then the car went to the track and picked up speed. During the movement the iPhone was pressed to the road, and the camera recorded the state of the gadget.

In the experiment, sacrificed two iPhone. The first time the smartphone’s popped out of the holder and TechRax has lost a device: the car was going at high speed, and the gadget failed to find on the road. The iPhone has secured more reliably. After repeated experiment enthusiast showed on camera the extent of the damage: the display of the gadget were covered with numerous cracks and with its aluminum housing has a matte finish worn off. In addition, the speakers disappeared portion of the camera of the smartphone.

Despite the damage, the iPhone without problems started and worked in normal mode. Thus, the gadget has stood an extraordinary test of strength.

The unit was very strong, but the last time the blogger is still “killed” him. For this he had put the iPhone 6s in the path of the lava flow. After some time, the phone flashed. Yes, the spectacle is not for the faint of heart. The performance he certainly has not preserved. The smartphone was forever drowned in the lava and who knows, maybe one day it will find future generations.

Media: Apple is testing the MediaTek chips for accessories that support wireless charging

Apple is planning to release a signature line of accessories that support wireless charging. About it on Monday writes industry publication DigiTimes. As it became known, the iPhone maker is interested in MT3188 chip from the company MediaTek, which is the world’s first hardware solution that supports multi-standard wireless charging smartphones and tablets. If you […]

In early 2019, the Chinese company Huawei made a splash in the market by introducing its first foldable smartphone called the Mate X. Now fans of the brand are wondering when to wait for the second-generation Huawei Mate X to arrive. And we have an answer. It is expected that next year, Huawei will release […]

Apple will open a new headquarters for 1,400 employees at the former Battersea power station in London

Apple will show its new London headquarters in the building of Battersea power station, which received worldwide fame thanks removed there music videos and films, as well as the album cover “Animals” of Pink Floyd. About it reports on Wednesday, the BBC, citing a company statement. The famous power station with four pipes, which is […]