During the October presentation, Apple announced the release of the game Minecraft to Apple TV. The most popular virtual constructor goes on the “Apple” TV set today for the price of 1490 rubles. 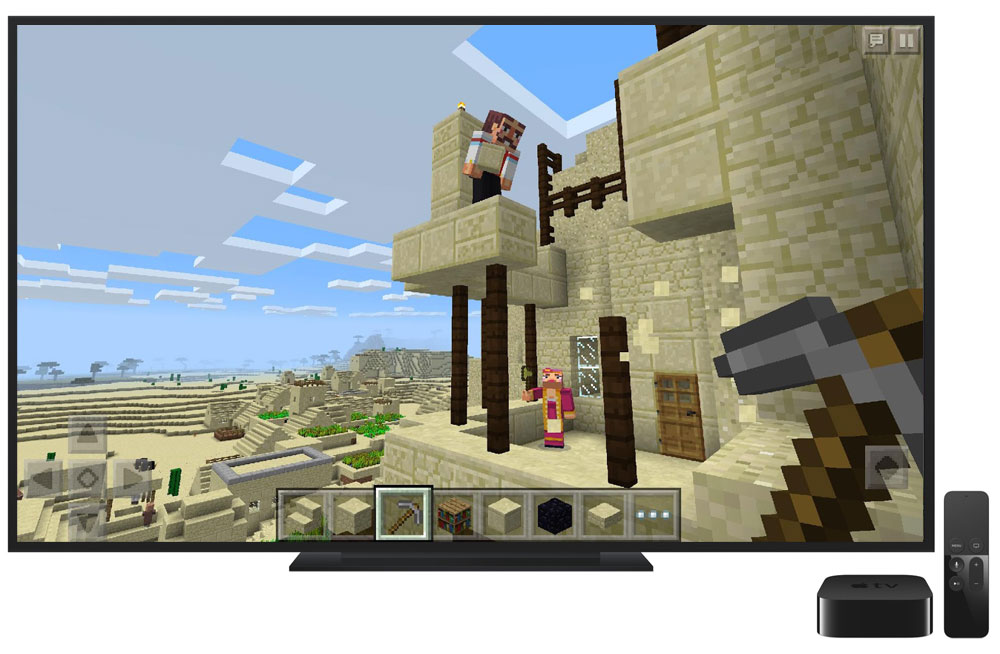 Minecraft for Apple TV will be identical to the current version of Pocket Edition for iOS that lets you control virtual characters by using a remote control Apple TV Remote, also together to play with other players using iPhone and iPad.

Minecraft best way stands out among the variety of video games. Here the whole world consists of cubes: trees, grass, buildings, characters. The name of the game literally translates as the building. The principle of Minecraft is that for a certain period of time to build as many buildings as possible, so that later when the game night comes, you can stand against enemy attacks.

Sandbox Minecraft can attract many owners of Apple TV, as there is no bloody scenes of the shootings and killings: gamers need to show the logic and wit, in order to build a building so that night the enemy attack was not successful. This principle is the important point, which Minecraft plays more and more users around the world.

The cost of Minecraft for Apple TV was significantly higher than for iPhone and iPad. On mobile game is available for for 529 rubles.

Read also:   The Russians "namemobile" another four iPhone 7 Plus from Alisher Usmanov

Tonight Apple released the second public beta of macOS Mojave for testing. It follows yesterday’s public release of the second iOS and tvOS. Significant changes were noticed – now Apple just brings to mind the firmware, fixes bugs and improves performance. Mojave itself is aimed at improving the overall stability of the system, major innovations […]

Trying to update iPad to iOS 9.3 turned into a “brick” some tablets

Some owners of the iPad when you try to upgrade your operating system to iOS version 9.3 was faced with a serious problem. Users are complaining that installing a new OS over the air or via iTunes hangs at a stage of activation of the device: the tablet fails authorization. Users will not be able […]