The Moscow city court decided to adopt provisional measures in relation to popular music service Zaycev.net. This means that the operators will block access to the site for 15 days: during this time, the franchisor, alleging that the site violated its intellectual property rights, should file a claim on the merits. 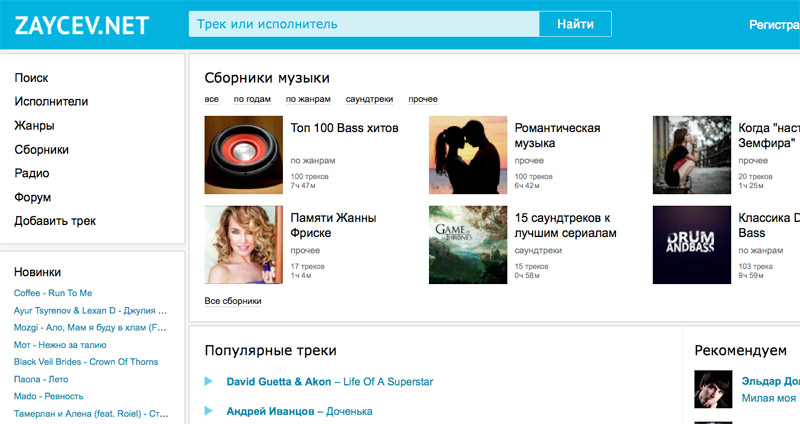 The court issued this decision on the claim of Sony Music, which is found on the website Zaycev.net belonging to her music — the song “You’re my password”, “Hello”, “Learning to survive”, “Stone soul” by Yulia Parshuta, say “Vedomosti”. These works were placed on Zaycev.net without permission, the court agreed. In Zaycev.net said that the content is already deleted.

According to Alexa.com, Zaycev.net — 247-th most popular website in Russian Internet. And according to TNS, Zaycev.net in April, the 101st website in the Internet on a monthly audience, and 120 m on average. His audience was: in April 2015, 4.4 million users. I Zaycev.net there is an official app for Android, the iOS version gets moderated App Store.

The court upheld Sony Music in two cases against sites that without permission were placed music tracks, follows from the decision of Moscow city court. Preliminary security measures had been taken in relation to the site pleer.com and ololo.fm. Claims Sony Music relate to those same songs Yulia Parshuta.

From may 1, 2015 came into force a new version of the anti-piracy law that allows rights holders to achieve lock pirate site operators. It covers not only TV shows and movies, but also books, music and apps.

Read also:   How to solve the problem with memory leak in macOS

Today Roskomnadzor said about locking the electronic library “flibusta sites”, whose owners did not remove the books on the application of “Eksmo”. Other sites, in particular Rutracker.org and Pleer.com removed the content after the decision of Moscow city court.

Company Anchor Labs collects funds for the release of the cable Anchor Cable, which is positioned as eternal, which is impossible to break. Another feature of the accessory – magnetic connector with interchangeable connectors for Lightning, micro-USB and USB-C. The problem of rapid wear of the Lightning cables known to many. The cord may fracture, […]

iPhone X was a breakthrough due to its design and technology Face ID. iPhone 2018 could be the one with the updated “stuffing”, which will have an impact on every component of a smartphone. Find out what will be the upcoming flagship of Apple-branded processor A12. No more brakes and hang-UPS Yes, it’s all so […]