The Russian company Yota Devices Wednesday launched a campaign to raise money for the launch of the YotaPhone 2 in the United States. A key feature of the device, we recall, is the presence of two displays is standard and e-paper. The latter is located on the rear side of the case: it can display information constantly without wasting energy. 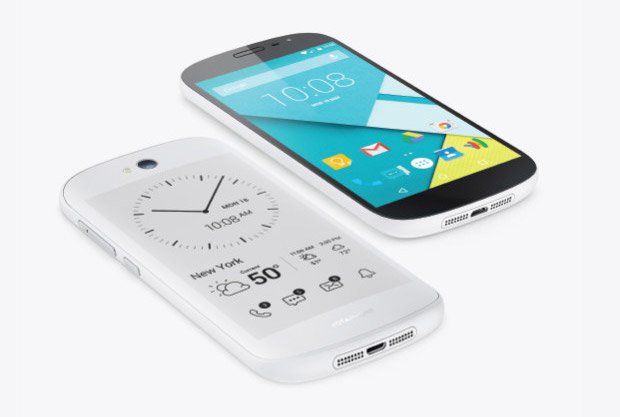 Users Indiegogo enthusiastically responded to the Russian smartphone. Necessary the sum of $50 000 was collected three hours after the publication of the project. The majority of users preferred model for $ 500 with delivery in August — this offer is available for first 100 users. Yota Devices also offered to buy a wireless charger and portable battery pack for $ 50. Yota Devices will collect the money on YotaPhone 2 within two months.

To develop YotaPhone first generation of the company Yota Devices took three years — the gadget was presented at the end of 2013. In December of 2014 debuted the second version of the device with improved characteristics. In equipping the YotaPhone 2 include a Quad-core processor Qualcomm Snapdragon 801 with 2.2 GHz, 2 GB of RAM, flash drive 32 GB, camera with 8 – and 2.1-megapixel cameras, adapters Wi-Fi 802.11 a/b/g/n/ac and Bluetooth 4.0, NFC module, etc AMOLED display has a size of 5 inches diagonally and has a resolution of 1920 × 1080 pixels (Full HD). Second with a 4.7-inch screen has a resolution of 960 × 540 pixels.

According to the CEO of Yota Devices Vladislav Martynov, in late may, the company will start selling the YotaPhone 2 in China and Latin America. China, according to the plan, will provide up to half of the total sales of the smartphone. By the end of the year, the manufacturer will enter the markets of USA, Indonesia, Turkey, India and South America.

Martynov also revealed data on the sales volume of smartphones. So, sales of the first gen amounted to about 40 000 pieces. But the YotaPhone 2 is already sold in the amount of $ 150,000 worth of handsets sold, a portion is by the distributors and partners.

In Russia at present the smartphone from Yota Devices sold at a price of 39 990 rubles for the version in black and 42 990 is for the white model. After the official announcement in December 2014 Western editions said about the device as “expensive, but a unique” device. According to the head of Yota Devices, about two months ago, the company began developing the third generation YotaPhone, which will be presented in 2016.

Samsung Galaxy S8 will come with a fully edge-to-edge display, reports Bloomberg. According to the publication, part of the screen is not only the top and sides, but in the lower part, which usually is the Home button. For comparison, the smartphone Xiaomi Mi Mix a screen frame perimeter, and at the bottom there is […]

Apple introduced a full set of beta versions of their firmware. In addition to iOS 11.2 beta 2 MacOS High Sierra 10.13.2 beta 2 and watch OS 4.2 beta 2, developers have been able to set tvOS 11.2 beta 2. tvOS 11.2 beta 2 has received a new feature AVDisplayManager, which allows you to automatically […]

“Black Friday” in Russia: the most popular ways of “divorce” of buyers