Company “MegaFon” and “Beeline” suddenly become generous: mobile operators offer their subscribers free of charge to use Internet access in their LTE networks. Surprisingly coincided the beginning of these shares — from 28 September 2015. 4G network “Megaphone” free traffic will be available by the end of 2015, and in the “Beeline” — up to 15 January 2016. Nag the reviewers believe that the current marketing activity associated with the upcoming launch of Moscow 3G/4G network “t2s mobile”. 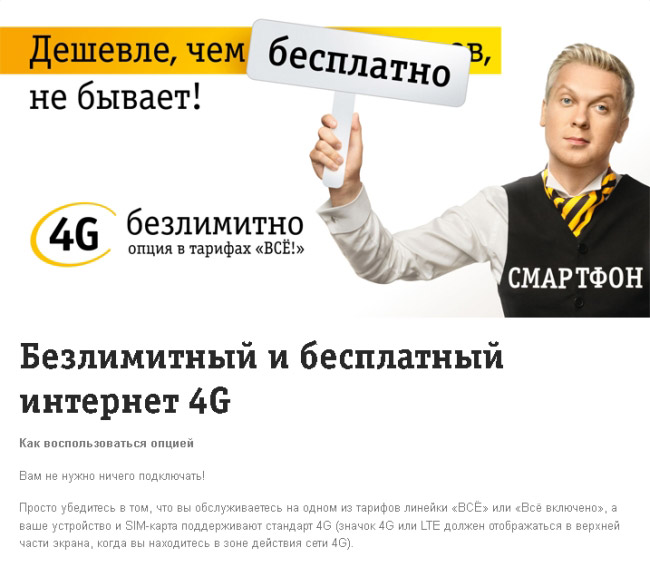 The cellular company has already accustomed its customers meticulous reading of the text of promotional offers, especially should carefully consider the information, which is not set out in huge letters and “hiding” somewhere at the end of the conditions for obtaining “free” anything.

Representatives of the cellular companies said that the promotion with the “free LTE” and are attracting new subscribers and giving current subscribers the opportunity to try 4G speeds. Both should in the future bring operators an extra income. 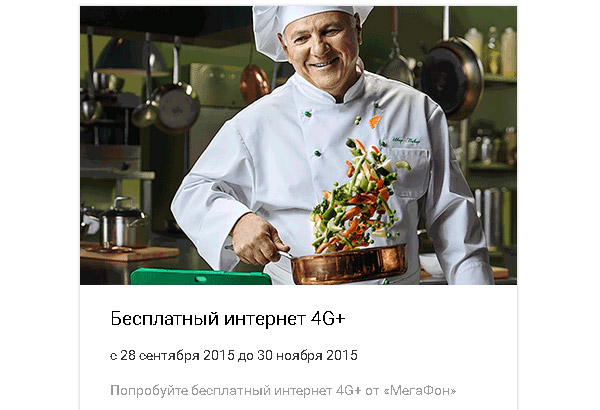 But judging by the conditions, the financial aspect prevails over all other objectives: a new subscriber who came in “the Megaphone” in the period from September 28 to November 30, 2015, to participate in the action under the name “Free Internet 4G+” need to connect one of the line options “Internet S-XL”. Of course, paying. After these costs, a new subscriber will receive each month of free 4G package equal to the size of the package in monthly-paid tariff options. Note that on the “free… the volume of Internet traffic in the 4G network+ begins to be depleted after consuming the amount of Internet traffic within the Options available in terms of Internet traffic within Options”. “Happiness” will not last long, just until the end of 2015.

READ  12.5.3 iTunes became available for download on Mac and Windows

There is a chance to double the batch size and existing subscribers of “MegaFon”. If they do not fall under the restrictions invented by marketers “the Megaphone” — see below the text of the offer (PDF) of “MegaFon”. 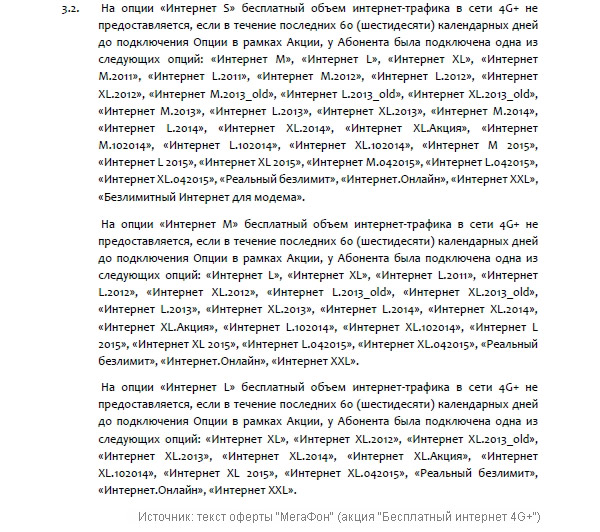 Clarifying the appearance of these “features” for current subscribers is simple: MegaFon don’t want to admit that someone moves to the shares for a lesser fee, but still a bargain, 1-3 months will spend for their needs twice as much Internet traffic.

Unlike restrictions, was invented in the “MegaFon” and subscribers of “Beeline” is a bit easier to get “free LTE” — you need to make use of one tariff line “ALL” or “All inclusive”. Reservations about “the rates” in the previous months-nothing.

The second difference deals “Beeline” is that the name of the campaign is the word “unlimited” (“MegaFon”, as already mentioned above, the subscriber will receive only an additional “free” package, which can be spent on the 4G network). In the network “Beeline” subscribers there are differences in the use of “gift depending on the relationship with the operator (prepaid or post-paid transactions).

“When you return to the network EDGE, 2G, 3G billing and accounting Internet traffic will be delivered according to your tariff, or connected options mobile Internet.

For customers of the prepaid system: the traffic in 4G network free of charge and does not consume Internet package included in the monthly fee on your tariff. After exhaustion of packet traffic in 2G/3G speed is limited to 64 kbps, and the Internet in the 4G network continues to operate at maximum speed!

READ  Samsung has significantly slashed the price of smartphones in Russia

For customers of postpaid system: the Internet in the 4G network is completely free and unlimited after your basic Internet package is over. Prior to the exhaustion of the main pack 4G Internet works on the terms of your tariff”.

Because LTE coverage is not perfect, none of the Russian operators, there are situations when prepaid subscriber, using 4G Internet, suddenly you find yourself where LTE is unavailable, and will spend the traffic from the main paid-for package, considering that he’s still in the “free” LTE network. This is the third difference. In “the Megaphone” are all clearly military — first spend basic paid package, then you get free 4G package.

Mobile subscribers of “Beeline” with post-payment in order to get to the free LTE, will have in the next 3 months as soon as possible to spend the basic package. This way of using the services of Internet access during the promotion period in the “Beeline” coincides essentially with the terms of the shares in MegaFon. 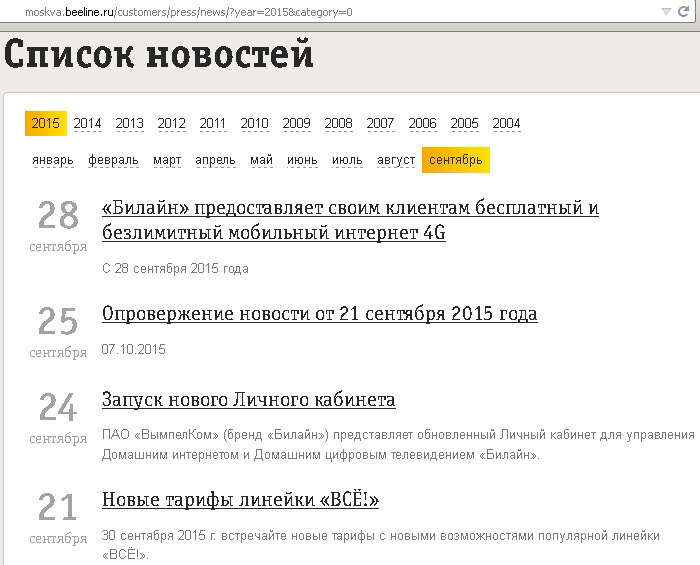 The fourth difference, though minor: the action of “Beeline” will last until mid-January 2016. So you can expect active use of the “free LTE” during the Christmas holidays. But don’t count lying on the sofa home, you will be able to “download the entire Internet”. Beeline warns: “In the case of a subscriber of a significant load on the network, including using protocols peer-to-peer, 4G speed cannot be guaranteed by the operator”. Possibly it’s a safety net, and maybe experience. After all, “striped” the operator has already provided free access to its LTE network a year ago, from 1 October 2014 to 15 January 2015, Moscow and Moscow region. According to the company, during the promotion, customers-owners of LTE devices has been one and a half times the number using the 4G network during the promotion grew by 55%.

Soon become known to the commercial terms of service in Moscow LTE network Tele2. Operators “the big three”, in anticipation of the launch of the company “t2s mobile” 3G/4G network in the capital region, decided to draw the attention of their subscribers to the presence and capacity of its LTE network. Compared with the fourth Federal operator Troika deployed even more powerful and with better coverage, and therefore such actions (a kind of additional “test drive” in a running network) can help to retain some subscribers wishing to “try LTE”, but still do not have this user experience. The best tried and tested option that may be of interest to Russian customers is the proximity of the words “free”, “unlimited” and “4G LTE”.

Tele2 has not yet started in Moscow, and the subscribers of the operators of the “big three” had, at least temporarily (not all), to get more services for the same money. By the way, it can be expected that “T2 mobile” will offer some attractive conditions, so that in a couple of weeks the residents of the capital have to choose where it is profitable to use mobile Internet access — the new operator or “old”.

“Architecture-M”: how to build a house using your iPhone

Private home became a trend – buyers stopped to consider the apartment as the only possible option: many are thinking about her, standing apart from all the dwelling throughout the day to rack up the drill and to hear a song about Valera. Of course, not all are ready to build a house; many people […]

Russian Orthodox Church supported the tariff of the “United Orthodox” company “Blagovest”, which involves a daily SMS with quotations of Patriarch of Moscow and all Russia Kirill. In addition, the Russian Orthodox Church noted that this rate provides a good opportunity to improve internal communications. This was reported by TASS, citing a source in the […]