Tired of the endless inspections of human rights organizations and realize the inevitability of rising wages of Chinese workers Foxconn is not the first time claims his intentions to actively implement robotics in their enterprises. Some media earlier this year was even told that for three years, the iPhone maker will try to bring the level of automation to 70%. However, in comments on the site Computerworld’s Chairman and CEO Terry GOU was quick to explain that his words were interpreted not entirely true. 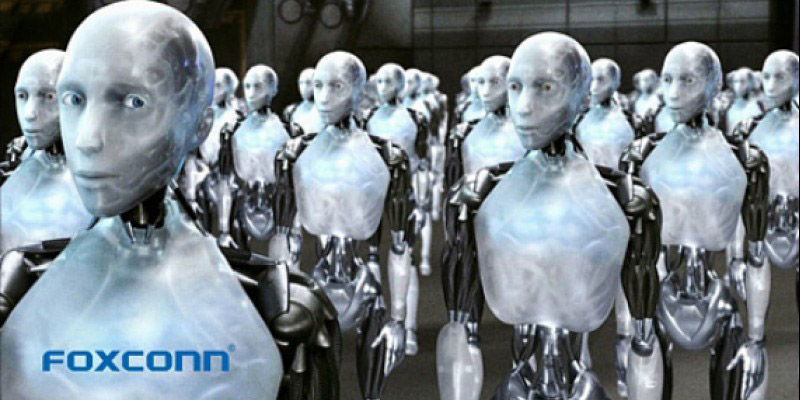 The number of Foxconn workers exceeds 1.2 million people. For example, currently in Russia only four cities can boast of a large population. There is nothing surprising in the pursuit of such a giant company to automate at least part of their production capacity. In February various media have reported on the statement of the President of Foxconn, which stated that in the next few years giant intends to automate 70% of their enterprises.

If you believe the source, GOU has denied this information, saying that the thematic resources just twisted his words. According to the “amended statement”, after about 5 years the company will equip the robots about 30% of their capacity. And about the transition to a fully automated production can only speak in 10-15 years.

While GOU said that the company does not even think to abandon human resources. Robots will perform routine and repetitive work, and the freed-up human resources the company is going to forward positions requiring higher qualifications. Himself Terry GOU believes that working at Foxconn is considered prestigious, and all the defenders attempt to prove otherwise would be untenable.

It is also reported that Foxconn is determined to remain the largest contract manufacturer of smartphones, tablets and PCs by the end of this year. The company is the major contractor for Apple, and this situation is unlikely to change in the near future. Become a partner of Apple is not as easy as it seems to some competitors Foxconn. Pegatron and Wistron to help release the iPhone, Pegatron and Compal Electronics to produce additional volumes of iPad. In addition to Apple, Foxconn produces smartphones Sony, Nokia, BlackBerry, Xiaomi, Huawei and Lenovo. Factory companies operate in Brazil and the Czech Republic, except for mainland China, and the new company will be opened in India.

“We’re talking about espionage”: the lawyers demanded to disable the transmission of personal data of Russian citizens on servers in Microsoft and Apple

The Russians began to complain to the attorney General on the new operating system Windows 10, which is accused of collecting personal data of users. The petitioners argue that the OS is already being used or will be installed in the Russian medical institutions, police stations, tax authorities and other state structures, which poses a […]

Do you have iPhone 7 real competitors?

The market is stable and consistent development, but in the pursuit of a leading position competitors sometimes do not think about the consequences. Before the presentation of the iPhone 7, many agreed that the smartphone will be “boring” and many groundbreaking features Apple will store up to the next-generation model. It is likely that these […]