One of the problems with modern smartphones is their fragility. When you drop the gadget on a hard surface, there is a chance to break the screen or damage other parts of the smartphone. Even protective cases not always save you from a broken screen or dents on the body. 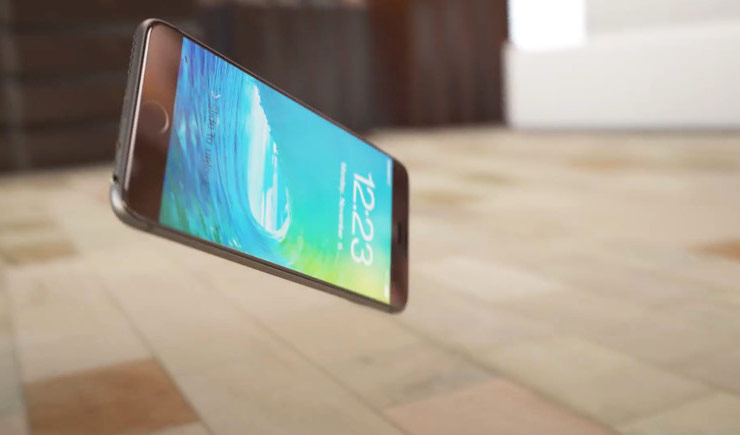 The latest Apple patent applications in the field of protection of smartphones from mechanical damage inspired the designer Sonitdac on creating concepts iPhone 7. With the light hand of the artist, the unit received an innovation technology of protection from falls, which he named “Parachute System”.

Created by designer iPhone 7 is equipped with pneumatic cushioning, ensuring the safety of the device. Once the smartphone detects the fact uncontrolled fall (accelerometer, gyroscope and camera together to solve this problem), turn on the pneumatic engine, which slows down the fall. As a result iPhone smoothly lands on the surface and the gadget remains intact.

Of course, this is just a concept, which is unlikely to be implemented in the near future. However, it is known that Apple is interested in such protection of smartphones, in particular, according to the company’s patents. One of them described no less unusual system of protection in the form of shock absorbers that extend from the body of the smartphone. Technology not only protects the iPhone if dropped on a hard surface, but also can increase his chances of survival if dropped in the water.

Of course, in many ways, the concepts are created for entertainment, and patents to protect intellectual property. But we believe that such technology will ever be implemented in the iPhone, and they will stop beating and sink.

Apple signed an agreement with Samsung to supply 100 million 5.5-inch OLED displays in 2017

Apple signed an agreement with Samsung Display for the supply of 100 million OLED displays, starting from the beginning of 2017. This publication reports the Korean Herald. It comes with a 5.5-inch panels for the iPhone Plus. Between the companies the agreement will last at least three years and is estimated at $2,59 billion for […]

Developed by the founder of “Vkontakte” Pavel Durov messenger Telegram was blocked in several major cities of China because of cyber attacks on the servers of companies located in the Asia-Pacific region. According to the source, the version of messenger for personal computers was unavailable to users in Beijing, Shenzhen, and in the cities of […]

Mega Limited has released a new version of the official client MEGA for the iOS platform. The updated application is now available in native resolution on iPad and got a new user interface. MEGA 3.0 boasts a “clean and simple” interface corresponding to the design language Apple. The updated program allows you to search and […]