Russian students believe Gazprom is the most attractive employer, according to a study of the consulting company Universum. In contrast rating American students Apple is not even in the top ten award future employees. In the USA students consider to be the most promising companies for the employment of Google, Apple and Facebook. 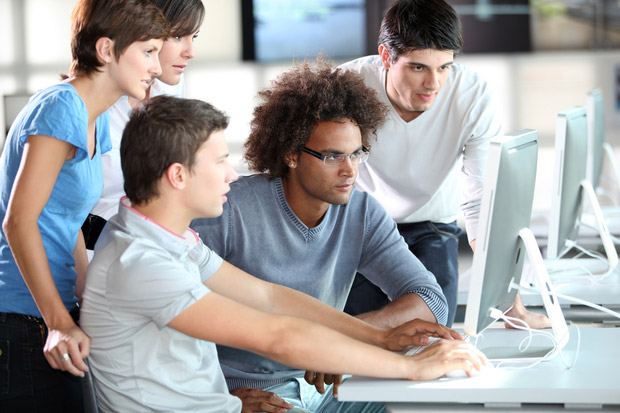 Russian students and young professionals dream of stability, and the embodiment of their vision of a successful career in the future is the company “Gazprom”. To this result the researchers came to the company Universum, which has rated “the Most attractive employers Russia 2015”.

In the study, were interviewed about 19,000 Russian students across the country and around 16 000 young professionals with work experience. Each of the two large groups (students and young professionals) were divided into two subgroups according to the chosen specialty — economic (business) and natural science (engineering) education, and each subgroup was divided geographically into three: Moscow, St. Petersburg and other regions of Russia. The result was 12 groups of students and specialists. 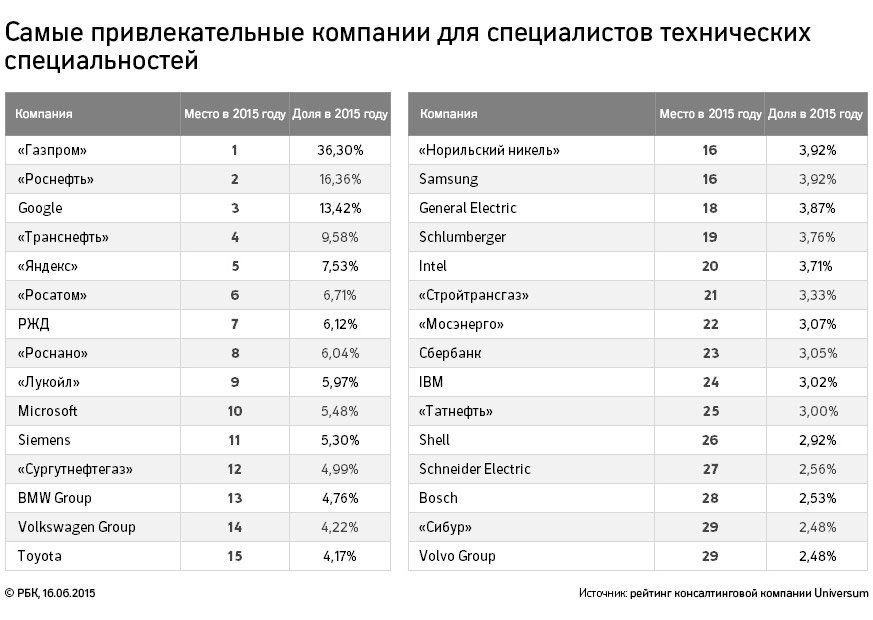 “Gazprom” as the ideal place for future work were mentioned by most respondents in all groups, says Rbc. Especially a lot of people wishing to work in the gas monopoly was among students of business majors in the regions (45.3 per cent).

Read also:   Against Apple filed the fourth lawsuit due to the slowdown in iPhone 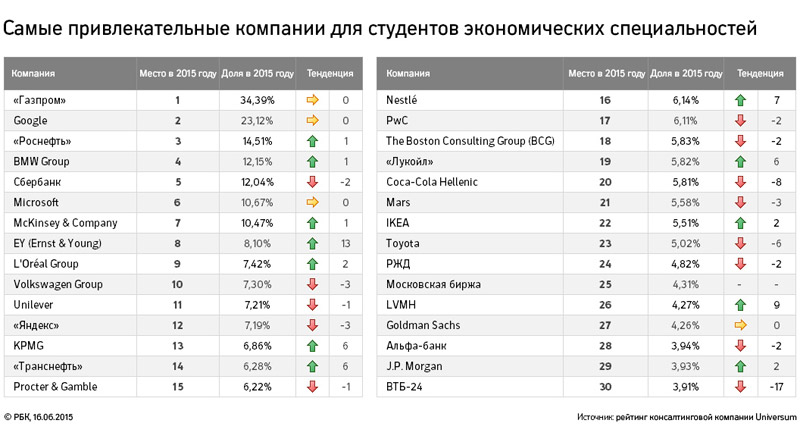 The top 10 employers for students of economic specialties in the regions included three Russian companies and seven foreign. After the four leaders, followed by “Sberbank of Russia”, Microsoft, McKinsey & Company, EY (Ernst & Young), L’oréal Group, and closes the top ten of the Volkswagen Group.

The researchers note that the interest of students of engineering and science professions in an international career in 2015 decreased, their more attracted to stability, and the ability to solve challenging and interesting work tasks are interested in only 37% of respondents. “The combination of these factors is favorable for companies that develop production in Russia and interested in attracting qualified young professionals, because it reduces the risk of “brain drain,” write the study authors. 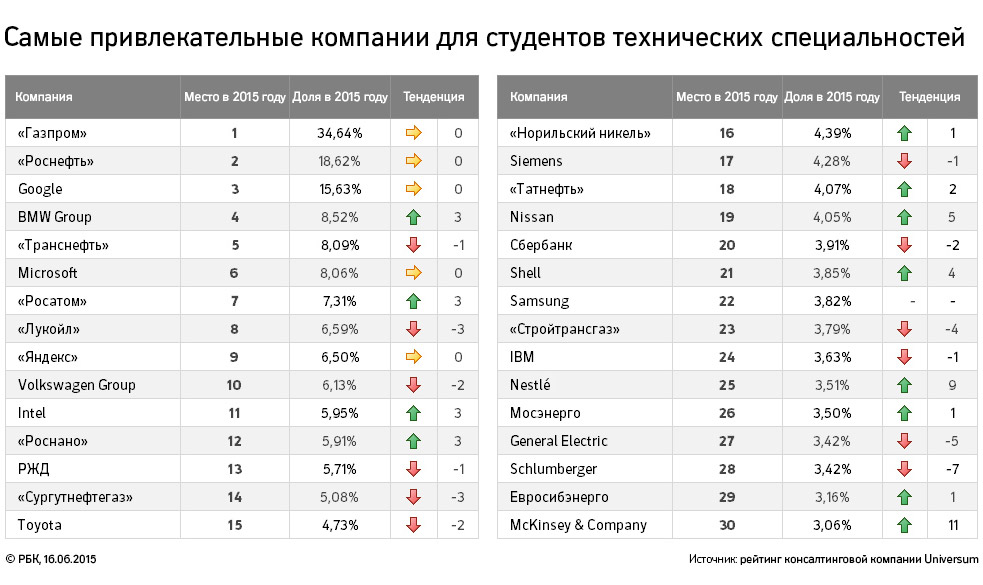 While in the top 10 among the future graduates of science faculties were more Russian companies than in those receiving a business education. In fifth place, according to them, is “Transneft”, followed by Microsoft, Rosatom, LUKOIL, “Yandex” and the Volkswagen Group.

Students of all groups were unanimous in defining the attributes of employer attractiveness: after stability follow the expectations of professional training and development, higher earnings in the future, important value respondents also gave strong financial position of the company. The researchers note that in 2015 decreased the importance of the attribute, such as a friendly working atmosphere. 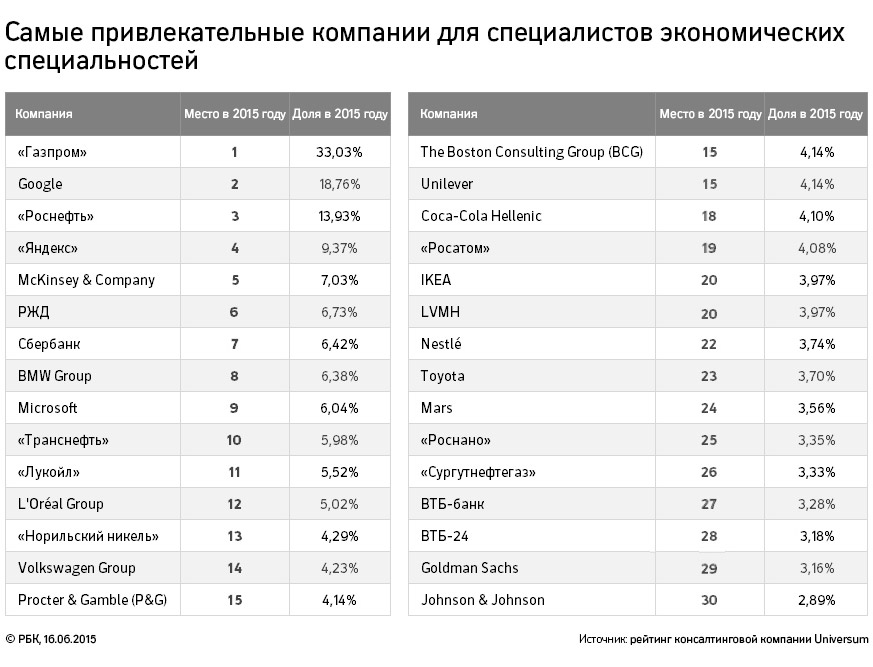 In 2014 leader in attractiveness was also “Gazprom”. Then among the leaders for the first time included Microsoft and Yandex, which confirmed its appeal in 2015.

The company “oxygen software, the developer of the tools for conducting forensic investigations of mobile devices and cloud services, announced the possibility of extracting the data of WhatsApp application on smartphones, backup and cloud services. A new version of the application “oxygen Forensic Suite allows you to from your iCloud Drive data popular messenger: all […]

In Russia the morning of January 25 began online-sale “Cyberpowerinc”. The organizer of the large-scale action is the Association of companies the Internet-trade (AKIT), which for the fourth year holds a sale on the last Monday of January. All the shops — participants of mass sales in the “cyber Monday” are collected at the organizer’s […]