In the App Store out the game “Arkanoid”, which talks about the destruction of Moscow. In total, the project created an Internet resource “Medusa”, the user is prompted to destroy about 500 historical sites of the capital. 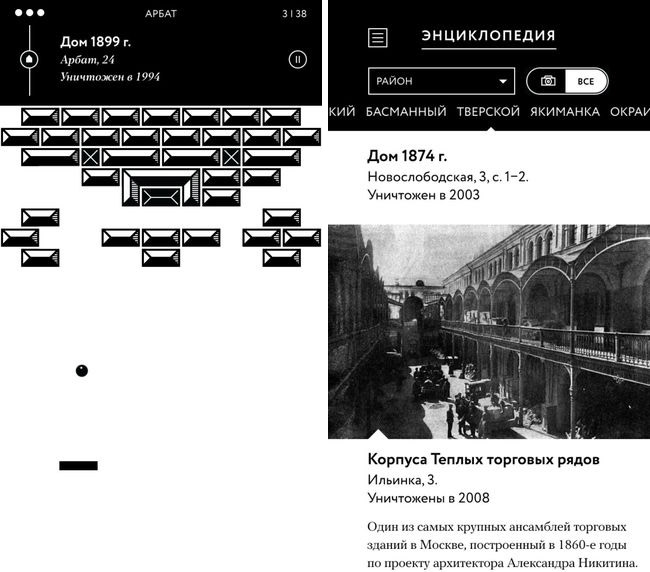 In “Arkanoid” user, as in all breakout, controls the platform with the ball. By means of a ball destroy the bricks. Each brick represents one destroyed earlier in Moscow historical building. Once the player breaks a block, then in the top of the screen there is its historical background.

The aim of the game is that you must pass all ten levels. Each level means a historic area of Moscow. Each level can be found from 30 to 70 bricks. The user can, if he will have time, catch the bonus from the ruined brick – a photo of any of the destroyed buildings. To hit the ball, while learning about the historical background and looking at the pictures won’t be easy — it will require skill.

The game has three difficulty levels: having the easiest level, the user becomes a “foreman” on average “prefect”, the difficult – “the mayor”. The first three levels of the game – areas Arbat and Zamoskvorechye and Khamovniki – can be free. In order to perform the rest, please purchase the full version of the game.

Just as stated in the description of the game, between 1990 and 2015 in Moscow destroyed more than 500 historic buildings, from the dam of the XVI century to apartment buildings in the art Nouveau style.

Download “Arkanoid” is possible on smartphones with iOS and Android.

On Monday, Apple said the iOS 9, which will be available this fall. This release enables iPhone and iPad to become even smarter and more proactive, give them some powerful search features and enhanced capabilities of Siri. New features multitasking, created specifically for the iPad, allow you to work simultaneously with two applications that open […]

Now Snapchat will be able to play AR games video

The company Snap announced the project Snappables. This is a new mask, which contain various game mechanics. And they are each forced to look ridiculous. These games in augmented reality can be found where the dog’s ears, glasses and other “decorations” to the left of the shutter button. To be used Snappables, you must open […]

Even if you’ve never played in Riverman Media projects, then surely something about them heard. If you have not heard – well, part of your life is definitely in vain. It is this office responsible for some crazy, seemed contrived and implemented under serious substance games, which at the time was such a spirit of […]