Analytical company Content Review conducted a second study of tariffs for mobile Internet in the countries included in the TOP 50 in the world in terms of GDP. Russia was in second place with the lowest prices for mobile gigabytes in the world, behind only Iran. 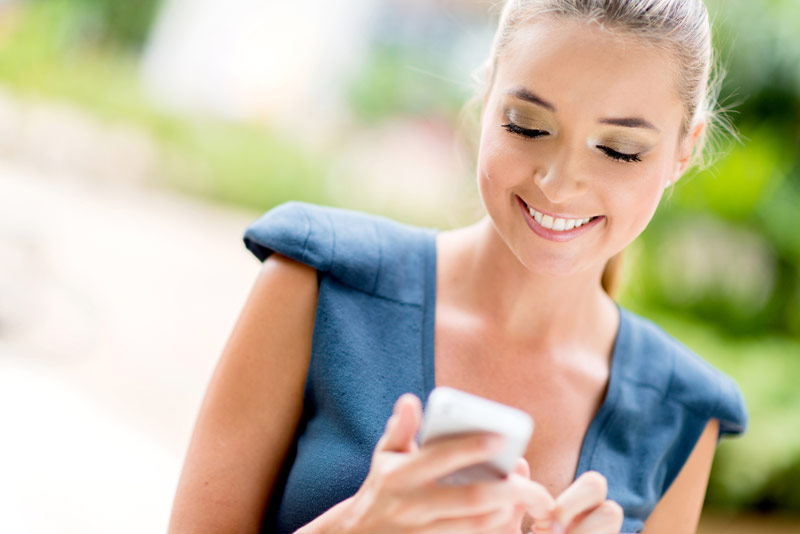 Analysts have compared the cost of 1 GB in the countries included in the top 50 in terms of GDP, counting all tariffs in rubles at the exchange rate on February 22, 2016. It turned out that in Russia 1 GB worth RUB 117 – 9 times less than in Britain, Japan and Belgium, and 6 times less than in Germany and South Korea. Lost to Russia only to Iran: local operator Hamrah-e-Avval charges for 1 GB is the equivalent of 13 rubles In the second half of 2015 in Iran earned the 3G network, which caused rates to fall 12%, the report said.

For the calculation of the average cost of mobile access, the analysts took advantage of the price tariff options, allowing users to purchase traffic packages, equal or close to 3 GB. Approximately as much – from 2.5 to 3.5 GB per month downloads from the Internet with one mobile device average subscriber, provides instructions to Content Review.

Each country in the report Content Review is only one rate one operator that is leading in the country on data revenue or number of subscribers. Russia was represented by MegaFon in the third quarter of 2015, he was the leader in revenues from mobile Internet, explains ladles. The price of 1 GB of analysts counted on the basis of tariff options “Internet S”, offering 3 GB for 350 rubles per month. 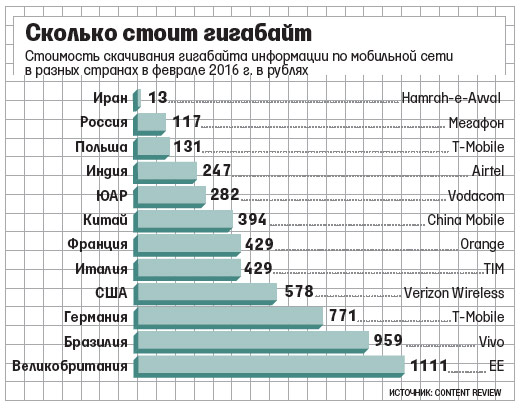 For the first time the cost of mobile Internet in different countries Content Review reviewed in September 2015 – Russia and ranked 3rd place (although 1 GB was worth all the same 117 rbl.). At the time, analysts translated the prices into rubles at the exchange rate on August 28, 2015, since then, the dollar rose against the ruble by 14% (from 67.4 to 77,1 rubles/$). The devaluation of the ruble is one of the reasons of cheapness of mobile Internet access in Russia, recognizes ladle, but much more to the country’s place in the ranking is influenced by the change rate in local currency.

Representatives of “Beeline” and “MegaFon” explained the low rates of mobile Internet in Russia fierce competition in the market. In Tele2 has named the low prices of his company is “the result of internal efficiency and daily cost control”. In Russia all the cheap mobile services and conversations, and additional services, he recalls. The representative of MTS thinks it’s weird that a sample was taken of the same tariffs of “MegaFon”: MTS reduces the average cost of 1 MB in the batch rates “from year to year.”

Russia is a region where mobile Internet cost is minimal, agrees the General Director Telecom Daily Denis Kuskov, Russian operators have historically preferred marketing promotions, associated with the price. Because of this serious increase in prices for mobile communications, including Internet access, is now impossible, says Grand, if the operators will do it at the same time, the Antimonopoly service considers it price fixing, but if someone would reduce the price alone, you will lose subscribers. The operators are trying to increase the average expense not directly, but by promoting bundled tariff plans and changing the price point.

Increase the memory of smartphones and tablets has led to the fact that many of the tasks we have to perform on a mobile device, including downloading Internet content. On computers this task greatly simplifies the BitTorrent Protocol and associated software. Such opportunities are today available on iPhone iPad. Last week saw the release iTransmission […]

Truth and myths about batteries: how to extend the battery life of the iPhone

The vast Network can meet a lot of advice, instructions and other guidelines to increase the life of batteries. As a rule, users are recommended to disable Wi-Fi and LTE, to control automatic updates and to run demanding applications. These guidelines accompany many of the myths associated with the preservation of autonomy of mobile devices: […]

Sony no longer allows use of their waterproof submersible

On the page of the support site of Sony there is information, according to which the manufacturer no longer recommends the use of their waterproof gadgets underwater. Sony is the most ardent supporter of the idea of waterproof smartphones. Almost all flagship devices from the manufacturer in recent years can boast of such protection. Standard […]