In 2011, the late Steve jobs announced Apple’s plans to build a new campus in the shape of a spaceship. Today in the Internet appeared fresh video about the construction of the headquarters, captured by drone DJI Phantom 3 Professional. Video recorded in 4K resolution, includes footage from the construction site in September-October this year. Thus, it is possible to assess the progress of the construction of a new facility. 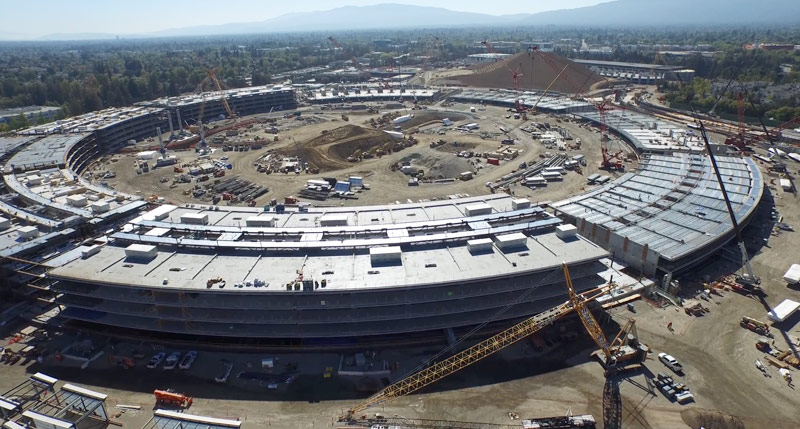 “Flying saucer” Apple will occupy an area of 2.8 million square feet (260,000 square meters), which is approximately 230% larger than the existing campus of the company. Moreover, this area does not include a separate audience of 1 000 seats and additional buildings intended for carrying out scientifically-research works.

The cost of construction of Apple’s new campus is more than $6 billion up To this point, Apple is preparing to install huge glass panels that will cover the facade of a huge building. The project was developed architectural firm Foster + Partners, while for a landscaping company OLIN responsible.

The campus can accommodate about 13,000 employees. The premises is planned exclusively to provide “green” energy, including solar panels with a total area of 700,000 square feet (65,000 m2).

The construction of the campus is planned to be completed in 2016 or early 2017.

Read also:   Russia has sharply increased the number of overdue loans on an iPhone

“Opening” the 12.9-inch iPad Pro shows that Apple has used the new Lightning connector, which supports high speed charging and data transfer. USB-C 12-inch MacBook allows you to charge the laptop from the adapter with a capacity of 29 Watts. As specialists have found out ArsTechnica, a similar opportunity and offers a Lightning connector in […]

Yet worldwide there is a struggle for the encryption, and Apple has been fierce debate over intelligence about unlocking iPhone, members of the British law enforcement agencies found a simple way to bypass encryption gadgets. The method first used by Scotland Yard, is as follows. The police tracked down the suspect until he goes down […]

Apple has announced a new three-year policy for warranty service keyboard Smart Keyboard for iPad Pro. About this Macrumors reports with reference to close to the company sources. We are talking about a 9.7 – and 12.9-inch iPad Pro and branded Apple accessory that turns the tablet into a laptop. The company has identified a […]