In China the wide audience was presented a prototype flexible smartphone made of graphene — two-dimensional material consisting of plates of carbon one atom thick and characterized by exceptional strength (200 times greater than steel), as well as high conductivity and elasticity. The device manufacturer is the company Interim, her product can be bent in any direction and to wear, for example, as a bracelet. 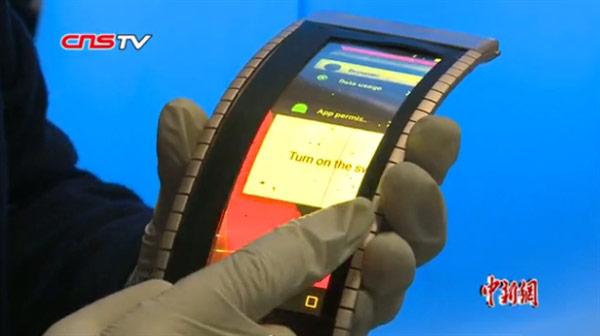 The smartphone was very heavy – almost 200 grams, its OLED display has a diagonal of 5.2 inches. Almost no details about the smartphone is not disclosed, but it works, and this is a lot.

The video shows that the device has basic functionality and is capable of playing videos, though the screen quality leaves much to be desired. The device can be worn as a bracelet on the arm, along with the video that the image on the screen gets jerky and flickering when bent phone.

Experience in the field of production of flexible gadgets have been demonstrated previously. But the difference between today’s presentations from previous shows is that this time the audience was shown a full-featured smartphone, not a separate panel, which can be used as a component.

It should be noted that in 2010, the company PlasticLogic received investments from RUSNANO in the amount of $150 million, it was Assumed that flexible readers are used as textbooks in Russian schools, and in Zelenograd will be built a factory for the production of such devices, but later the project was abandoned.

On the eve of the start of sales iPhone 6s and iPhone 6s Plus, Apple is preparing to move users on the company’s Android smartphones. Simultaneously with the release of iOS 9 update cupertinos proposed a tool to facilitate this process: to transfer information from mobile devices running Google on the iPhone offers the most […]

Minute shopping: a “clothes” for gadgets

Each device needs its own accessory, we picked up interesting items from certain manufacturers presented on Yandex.Market. Case for iPad from Spigel Spigen cases in stock are sold on Yandex Market at the price of 1100 rubles, there are simple silicone pads cheaper. Most cases obviously make the iPhone thicker, but it kompensiruet comfortable grip, […]