It has been estimated that Apple accounted for 94% of the profits of the global smartphone market. As you can see, Cupertino know how to make money on their products. One of the most profitable strategies of the company is to offer the base model iPhone with a negligible amount of memory and increase the price by $100 for each “step” in the size of the store. For this reason, Apple is often accused of greed, especially when it comes to memory. The relevance of this issue has become with the advent of video recording in 4K resolution. 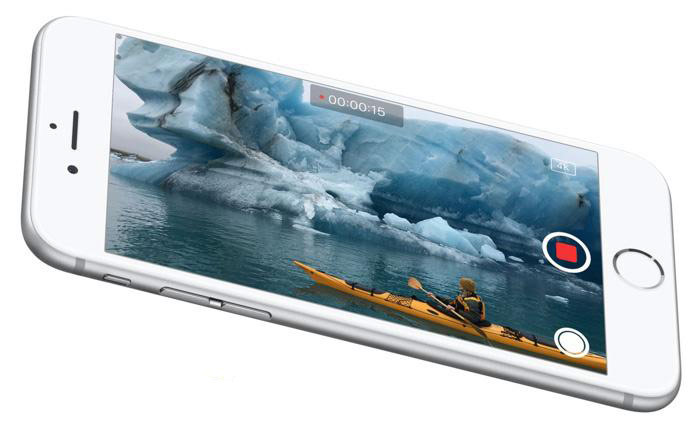 The amount of memory the iPhone when shooting in 4K vary depending on the number of gigabytes. On average, one minute of video at this resolution a size of 375 MB. For the owner of the iPhone 16 GB of available memory is less than 12 GB. This means that you will be able to take only 32 minutes of video without installing a single app without making any photos and not uploading any songs.

Anyone who has ever assembled even the simplest video knows that the length of the footage can be ten times greater than the length of the finished video. Don’t forget that in reality people are installing on the device a specific set of applications, downloading music and photos.

But even 64 GB might not save the fan videos. Just imagine: you put the necessary apps, downloading music and shot some photos. In the end free to remain around 32 GB or less. In this case, you will only be available a half hour of 4K video. The only way to balance between data storage and shooting video everywhere to carry around your Mac and copy the content on it, freeing up memory on the iPhone. A great scenario for the vacation, isn’t it?

There are several ways how Apple can solve the problem with the available gigabytes on smartphones: one realistic and the other is in the realm of fantasy. The first is to increase the standard options of memory. At the time the scheme 16/32/64 GB, the company has moved on 16/64/128 GB. With the proliferation of 4K video it is time for a new drill.

Users who prefer the iPhone with the maximum possible amount of memory, just don’t want to think about its scarcity. They have the ability to download a decent amount of music, not relying on a cloud service Apple. Stable Internet connection there is not all and not always. While in the subway or during a flight with streaming music, you can say good-bye.

In today’s world, when there videos in 4K resolution it is time to move to the following memory capacities: 64, 128 and 256 GB

There is another way to solve the problem. This is the use of microSD card slot in future iPhone models. They can be used solely for the storage of music and video, Parking games and apps in the device memory. Expandable memory will allow Apple to continue selling iPhone 16 GB. In such a scenario, there is logic company already offers users the adapter for the microSD card worth $50.

Some MacBook models are still present card readers (for example, Retina MacBook Pro and 13-inch MacBook Air). But the slot in the laptop is only designed to transfer photos and videos from digital cameras.

The emergence of microSD in the iPhone is unlikely for several reasons. First, the company is moving toward wireless technology – the new MacBook there is just one connector for charging. The disappearance of the SD card slot is in the other models — a question of time. It is obvious that the iPhone lineup will follow the same principle.

Secondly, there are limitations of iOS. Work with a memory card involves the movement from the root directory structure of data stored there. But Apple stubbornly resists the idea of an open file system for iOS.

The third reason is Jonathan Ive. Try the main designer of Apple to offer to add to a sleek and smooth the iPhone is another connector. It seems that the answer is very simple and straightforward. The design is moving in a different direction. Very soon we can lose the 3.5 mm audio connector for earphones and go on a virtual SIM card.

The last and most compelling reason is money. Technically savvy user can expand the memory purchased a MacBook through the SD card, but such a scenario will never occur to the average consumer. If an ordinary person needs more memory, it would just pay Apple more money. The news of the advent of the microSD slot in the iPhone will scatter very quickly, after which the company will start to lose huge money. Apple never would do such a thing.

There is a third way to meet the needs of users to shoot 4K video: the iPhone Pro.
Differentiation iPhone 6 and 6 Plus takes place in the plane optical image stabilization – it is only 5.5-inch model. According to rumors, specifically for the iPhone 7 Plus preparing system cameras with two lenses. Apple could continue to increase the distance between the two models.

To justify the large difference in the characteristics in the future, you can rebrand the iPhone Plus and renamed it iPhone Pro the memory and supplying the above-mentioned volumes: 64, 128 and 256 GB. Such a model company would recommend for those who like to shoot video on camera phones.

And according to you, should Apple increase the memory of iPhone? Or the appearance of a microSD card slot looks more interesting option? What do you think?

How to buy a Xiaomi laptop Air 12 for the price of the manufacturer?

Is it possible to save money when buying a Xiaomi laptop Air? It is possible if to use the offer of the online shop GearBest. Interesting promotion applies to a 12-inch laptop Xiaomi Mi Air Chinese clone of the MacBook Air. It is now possible to grab at factory price in China that would normally […]

In Japan created a slot cartridges for smartphones

The app icon on the iPhone screen does not give the feeling of owning a game that provided the classic cartridges for the video. This, apparently, was guided by the developers of Beatrobo, creating a game cartridge for smartphones. A device that connects to the iPhone via the standard audio Jack, was presented at the […]

Some users started to return the iPhone X because dissatisfied with the changes, the website PhoneArena. A man from South Florida’s pre-ordered on 27 Oct and received 3 iPhone X Nov. But a few days later he returned the phone. According to him, iPhone X turned out to be less useful for his work than […]