The song Pharrell Williams Freedom will be the first exclusive music track for the Apple Music service. About this he wrote on his page in Facebook. The song “Freedom” appears on the service on June 30, coinciding with the launch of the service. 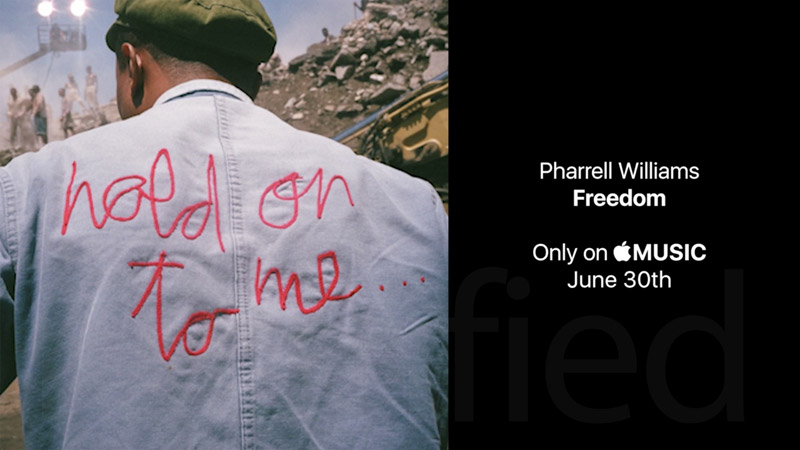 Streaming Apple Music service was announced in early June. For a subscription cost of $ 10 a month users will have access to listening to music on demand from the catalogue, online-radio Beats 1 and Connect to communicate with the artists.

Within Apple Music, the user can listen to music from your own iTunes library and directory service, which includes more than 30 million songs. The service will be available playlists with novelties, or music chosen to match the tastes of the user.

Service users also have access to 24-hour online radio station Beats 1 by DJ from new York, Los Angeles and London. And Connect artists will be able to share with fans backstage-photos, news, or even release singles. The platform is integrated with social networks Facebook, Twitter and also allows you to share content via iMessages or e-mail.

Apple Music will be available for users in 100 countries on 30 June. In Russia the cost of the subscription will amount to $ 169 per month, first three months, it will be free. The service will be available on iPhone, iPad, iPod Touch and PC, and since the autumn of this year — also on the Apple TV and Android smartphones.

It is known that Apple has long worked with Pharrell. In April of this year, two weeks before the start of sales of Apple Watch, the musician appeared in the American version of the popular TV show “the Voice” with epplovskie hours. As befits the characters of his ilk, Farrell chose a gold version of the Apple Watch Edition with a sports strap white.

The video of the presentation of iOS 9, OS X, El Capitan and watchOS 2 is available for viewing

The streets of Steve jobs, which was to appear in the South-East of Paris, now will not. The proposal was blocked by the Communists and “green” from the municipal Council of the French capital. According to the French resource Rfi.fr the opportunity to give some new names the streets of Paris appeared in connection with […]

Apple has started selling the brand in the online store phones iPhone 6s and iPhone 6s Plus without binding to a cell network. This is stated in the press release of the company. Since the release of the first iPhone model in 2007, the phone was sold and serviced exclusive in the US is the […]