There are several cars that are very dangerous to update. For example, the famous "Gelik". Yes, and why go far? The classic Niva, now known as 4×4, is also quite difficult to update. You can understand the reason: the audience is so accustomed to the design of these cars, to their characteristics, that the new generation may simply not “fly up”.

There was a classic VW Beetle, produced from 1938 to 2003, and its new generations could not become even a little as popular. The car from a national one turned into a niche, more likely perceived as a stylish toy for non-poor Europeans.

Land Rover Defender is one of them. With minimal modifications, it has been produced since 1948. At first, the car served the needs of the British army under the name Land Rover Series 1, and since 1983 it has already gone to a wider track, which was driven by hunters, fishermen and just people who needed a reliable real SUV. 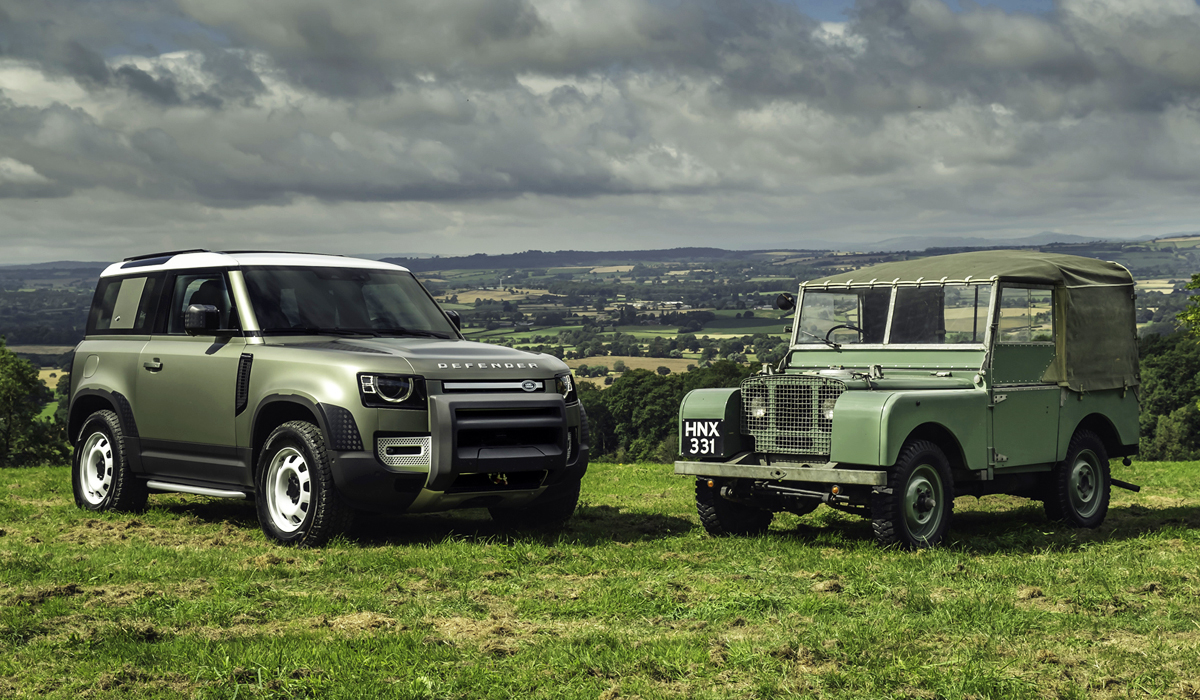 Refresh “Def” it was necessary for a long time: the square design of the old model simply did not meet modern requirements for pedestrian safety. Therefore, the development of a new generation has been engaged for several years. We were very careful, because wrong steps to the left or right could lead to the sunset of the legendary series. 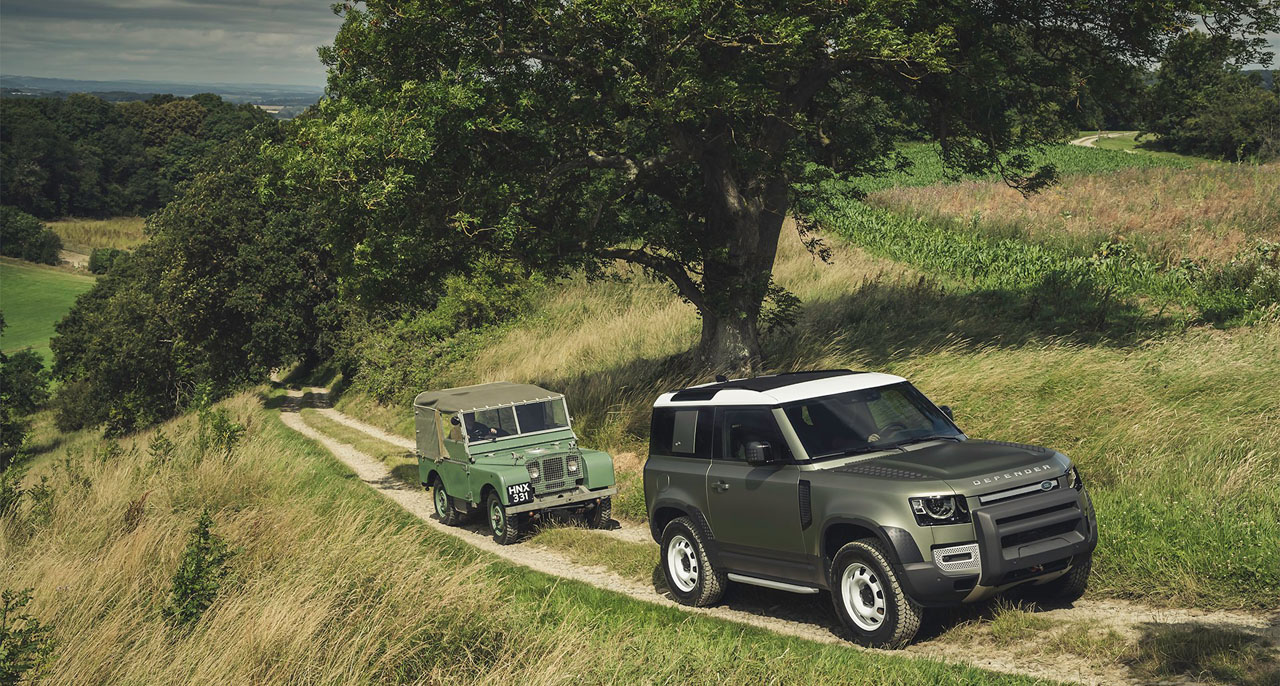 At the same time, it was clear that conservatives, accustomed to the brutality of the old “Def”, would most likely be unhappy: in the decades that a car was produced, a lot has changed. Including the very understanding of brutality.

In 2011, the company showed the first concept. It was called DC100, but it was clear to everyone that it was anticipating. 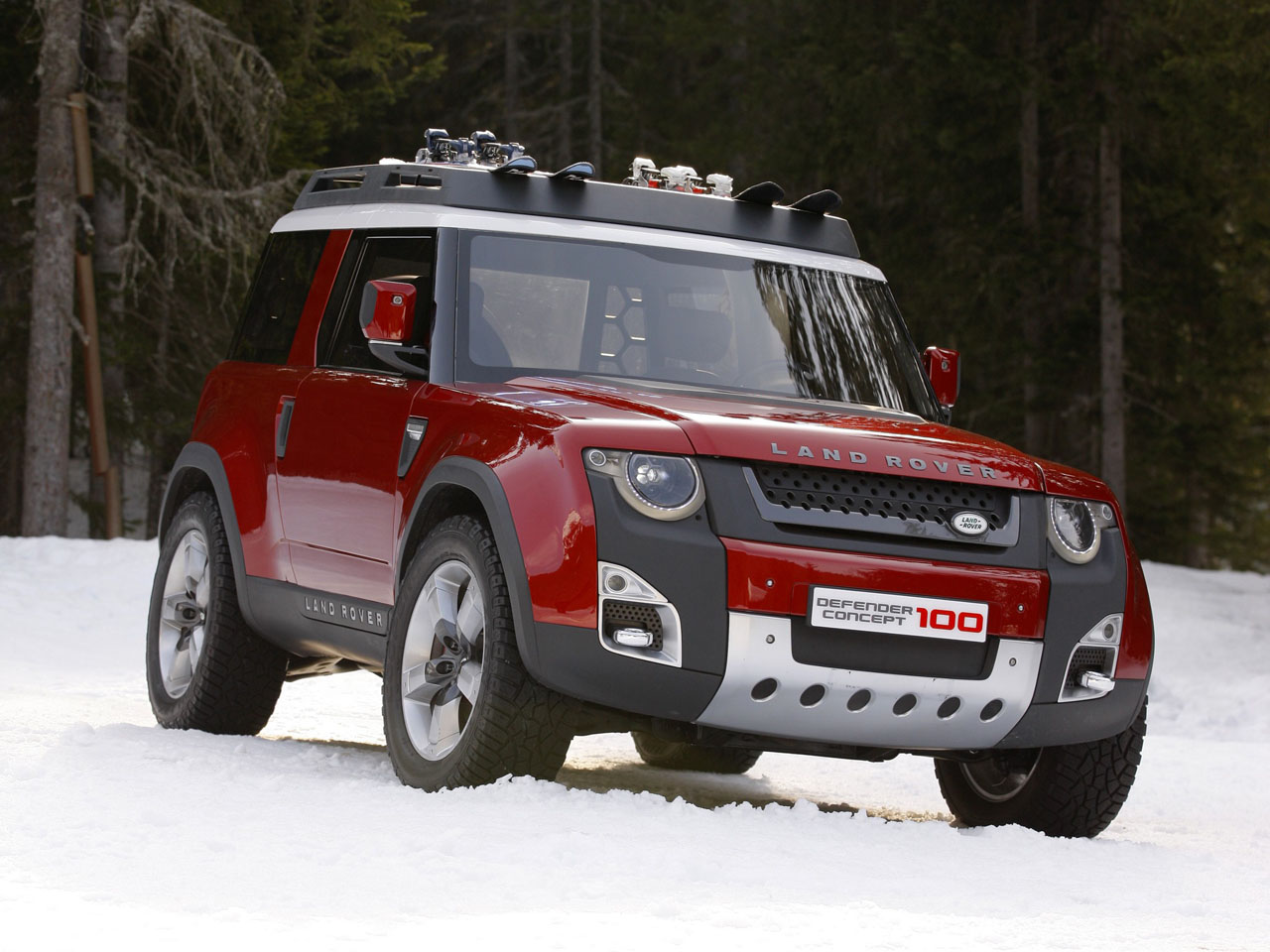 That concept was a huge delight. It might not be among those same conservatives, but it was so cool that it seemed DC100 posters could fill the walls of children's rooms, like the incredible Diablo or the first Countuch. 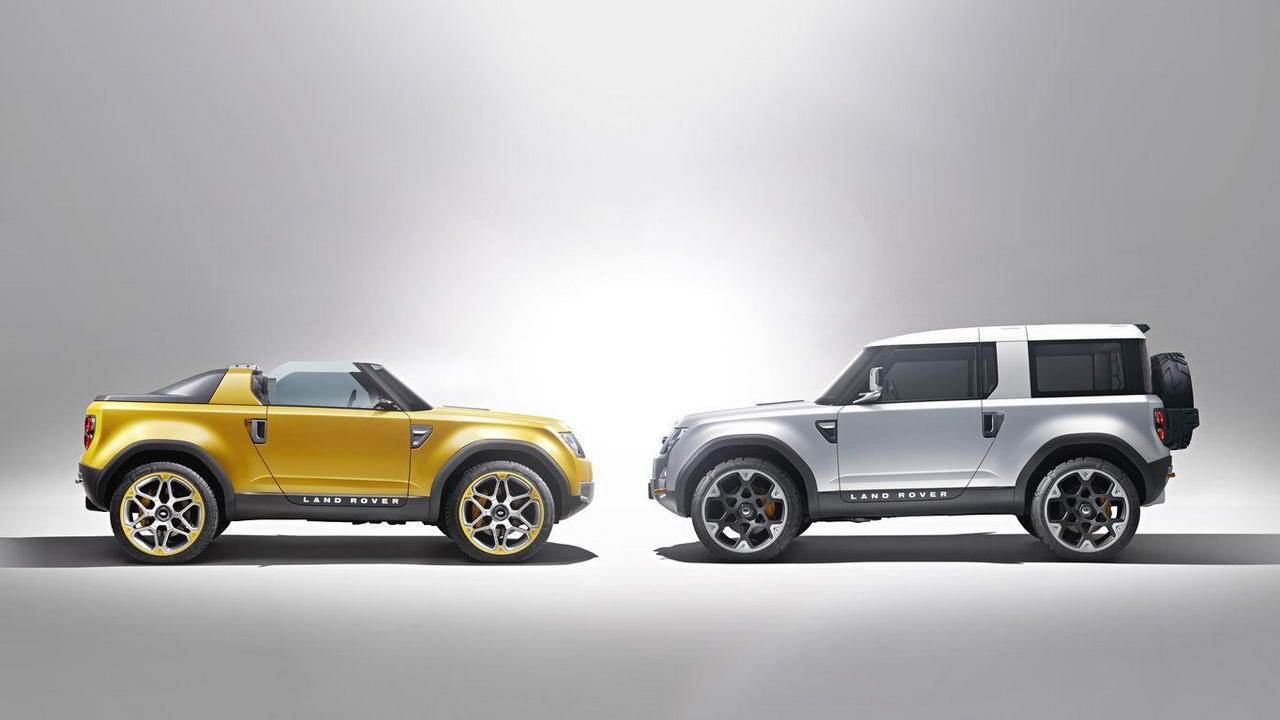 Despite, to put it mildly, a warm welcome, Land Rover was in no hurry to release the update in a series. And such a move is understandable: after all, “DEF” is not about design, but about dirt, mountains, ford and the maximum expression of gross muscularity.

Read also:   About Everything Interesting This Week # 15: Tesla Model 3 and California Save Animals

And finally, the company declassified it. Sorry, Apple, but today your presentation was outstripped by a small British company: the new Land Rover Defender was officially unveiled to the world.

I'll start with the interior, since it was the salon that became the epicenter of the technological ability of the new generation Defender. Here is the new Pivi Pro multimedia system. It can update by air, supports Apple CarPlay and Android Auto. The system contacts with two smartphones via Bluetooth. The center of the Pivi Pro is a 10-inch display. 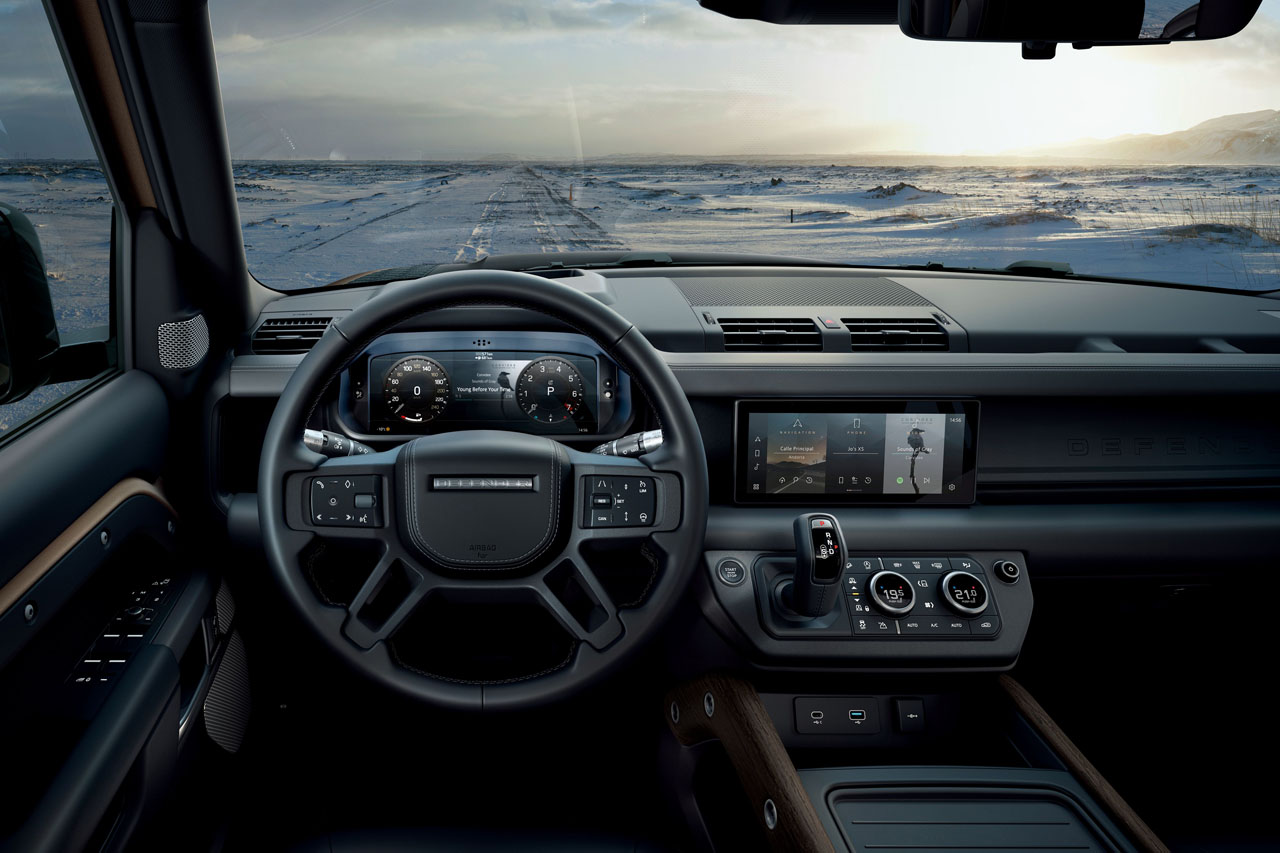 The navigation system is self-learning. Probably, after some time, she will understand your favorite routes or favorite scenarios, so that instead of that boring highway, she will offer a difficult track. 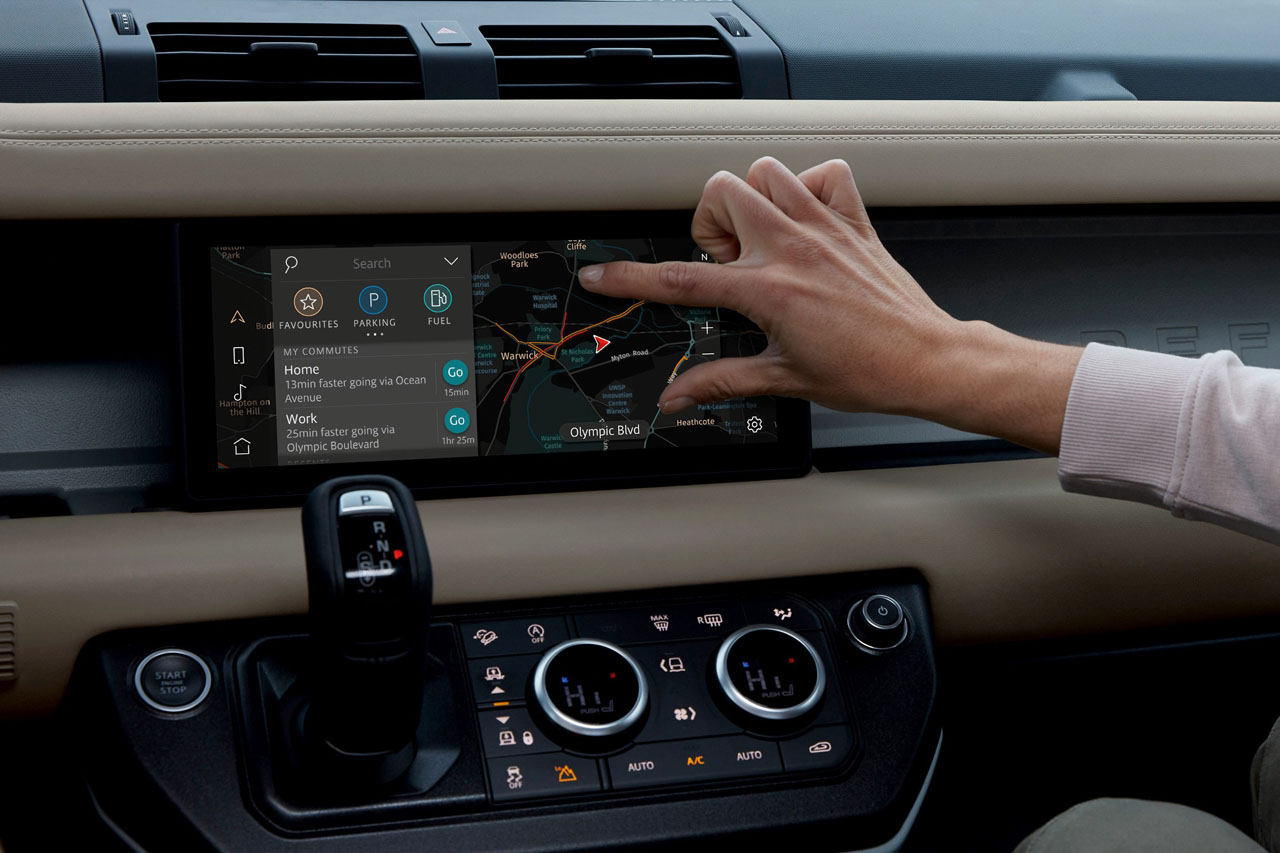 On the dashboard, as on real SUVs, there are special grip for the front passenger – otherwise it will be simply inconvenient for him to go off-road. The handrail is mounted on a beam made of magnesium alloy. It goes along the entire dashboard.

The interior is upholstered with a variety of materials, the choice of which depends on the monetary preferences of the future owner: grained leather, high-strength polyester, fabric, leather, artificial suede or Steelcut – textile, 30% wool. There will also be decorative walnut or oak panels. In any case, there is plenty to choose from. 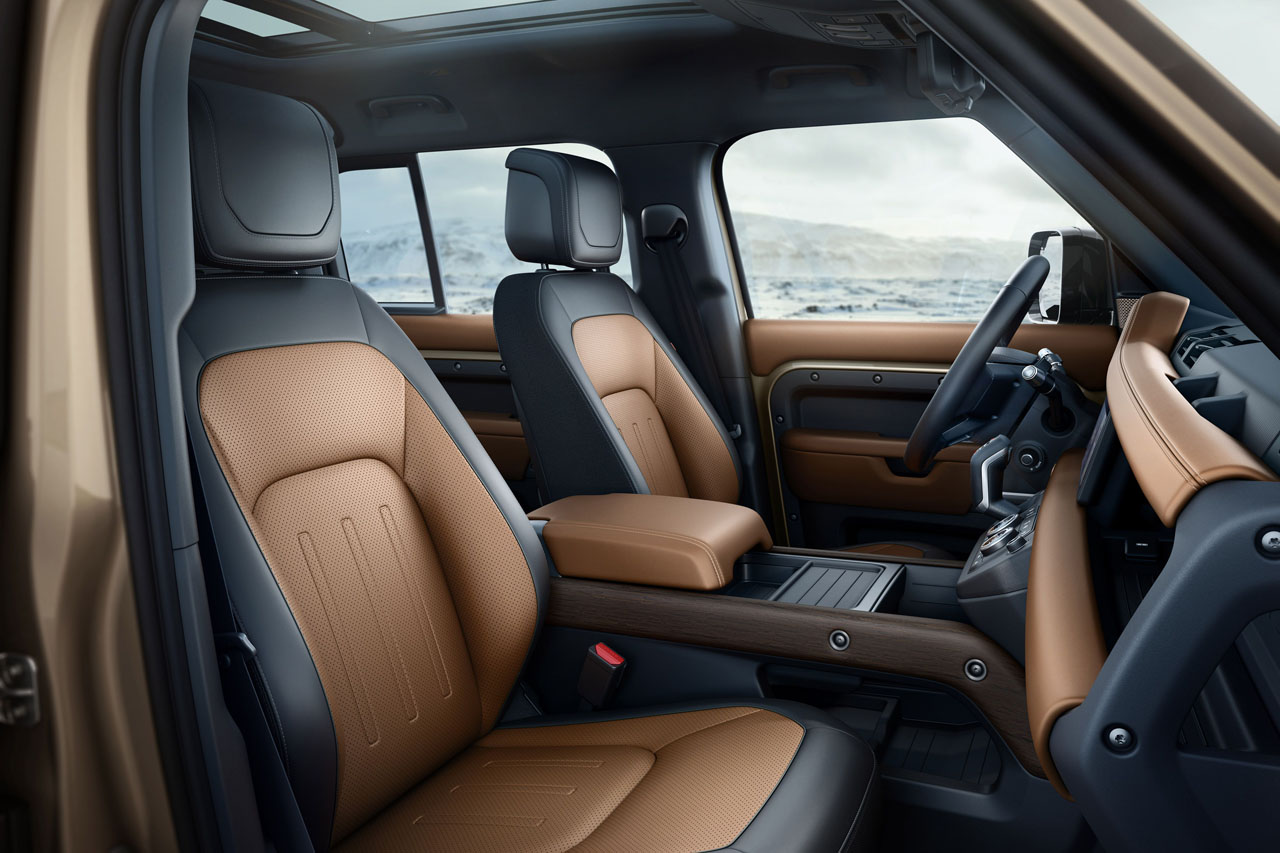 A rather unusual solution that many of my colleagues liked was an additional third seat in the front row of seats. The soft folding roof also looks good. All this is optional equipment. It also includes the Meridian audio system, and sockets, USB and holders for various gadgets.

Many of these options could not be represented in the classic "Def", but now the time is something else. On some models, even a 5G module will appear!

The most popular word used to describe any “Def” is brutality. And there are no flirtations with the audience: this car is really like that. The new generation keeps pace with the times, remaining as such.

The new “Def” will have at least two versions. Paying tribute to the past generation, they were named accordingly: three-door Defender 90 and five-door Defender 110:

In appearance, you can easily see the continuity of generations, albeit with small flirts: short overhangs, headlights, as if emphasizing that once they were round. We didn’t get rid of Alpine Light's signature roof windows. It is still not very clear how useful they will be, but even without much benefit they give a special charm and “defowness” to the new SUV. And the optional Explorer Pack will add to the standard equipment the roof rack and snorkel: 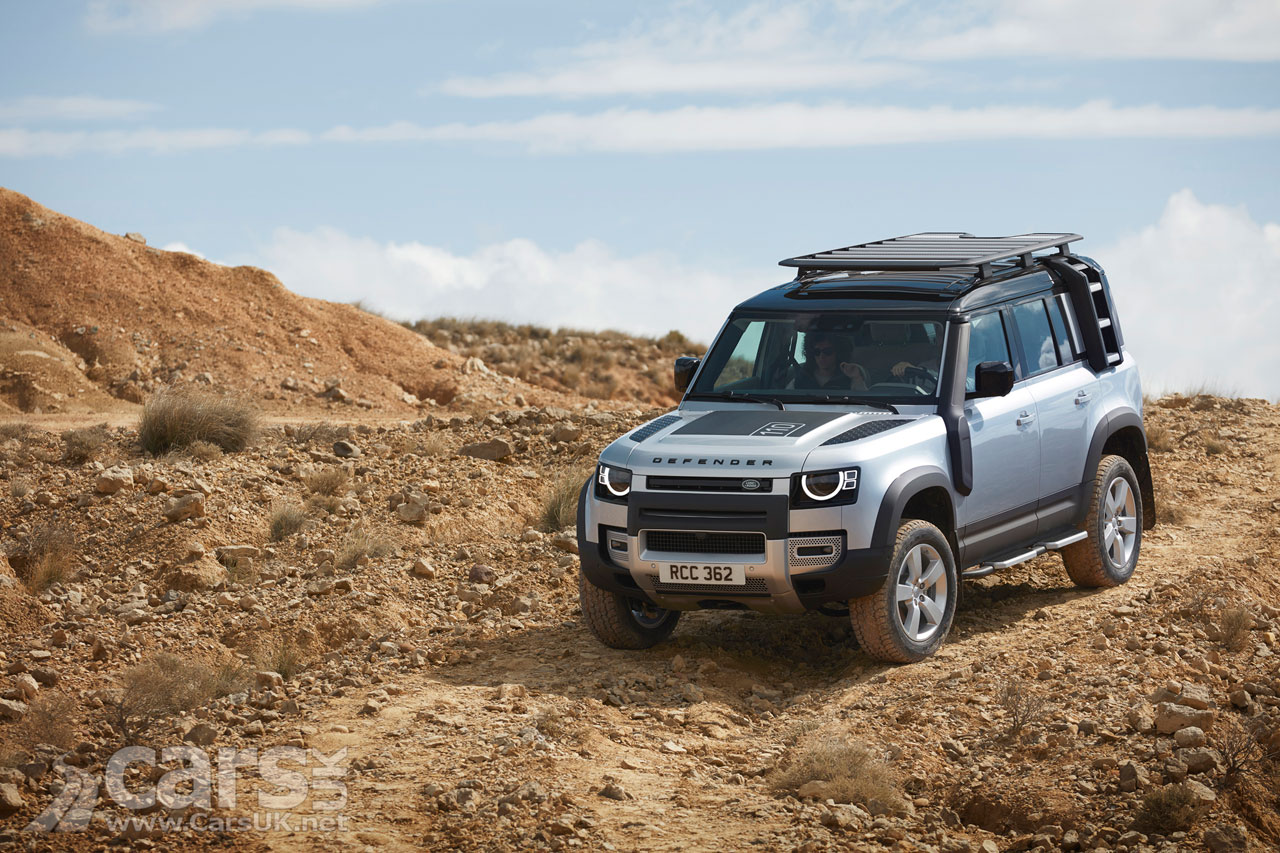 Despite the flattened front made as per safety requirements, the rear end starts very abruptly. It was here that the reserve was hung up. 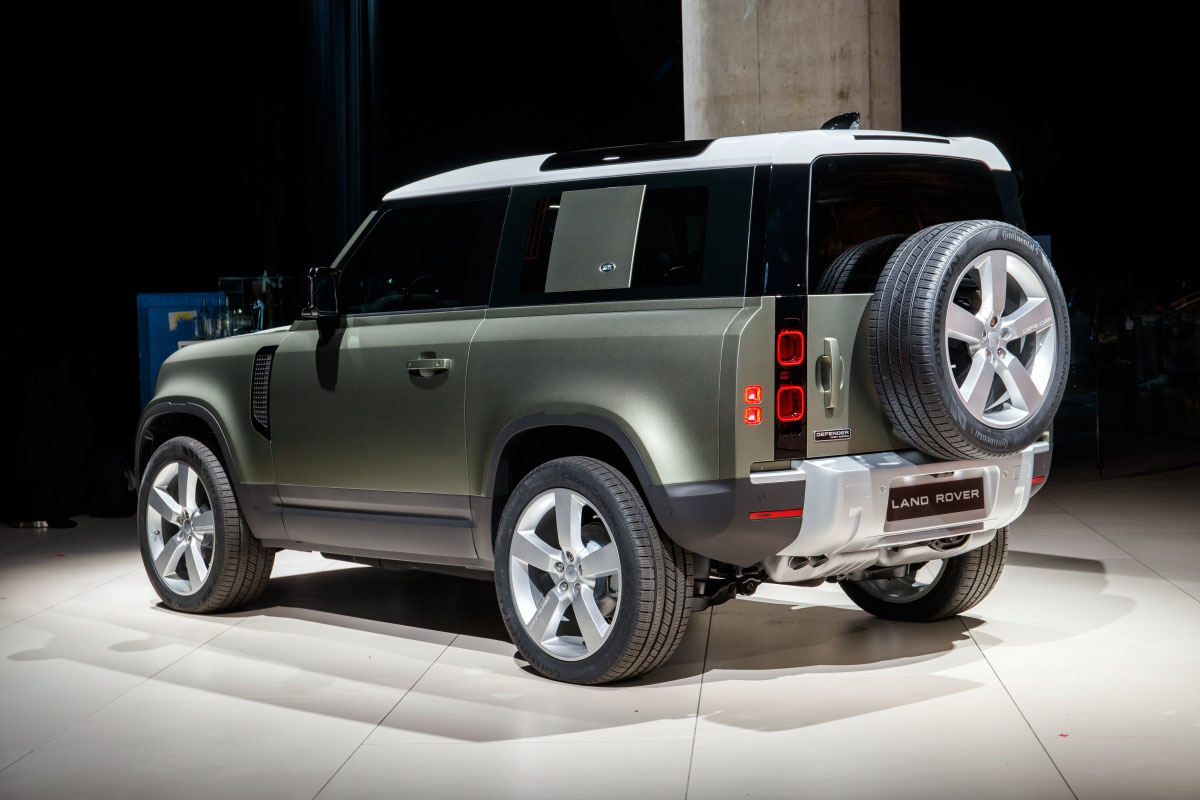 I’m wondering: is it possible to fix the second wheel to the hood? There is no answer to my question yet, but it is already known for certain that with the optional Urban Pack the spare tire will have a special case.

Do you remember that Defender about the lack of roads? So this one too: the standard ground clearance is set at 291 mm, which is 41 mm more than the previous generation. If necessary, the car will be able to raise another 70 mm or fall by 50. And the total suspension travel is half a meter! I don’t know about you, but in my opinion it’s a direct buzz. 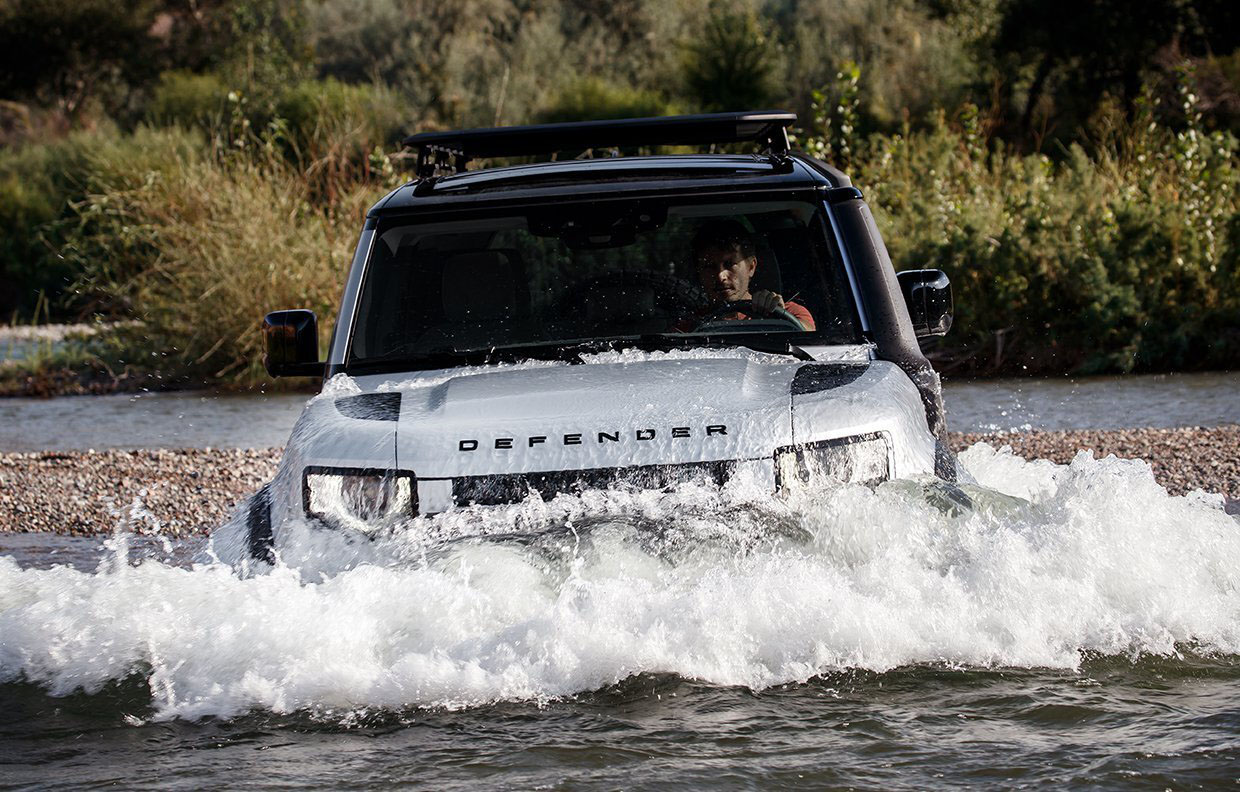 Off-road performance – the main thing that is in the “Def”. And here it is absolutely unimportant about which generation we are talking about. I understand it, you understand it, Land Rover understands it. Therefore, Defender can drive where there are no roads. 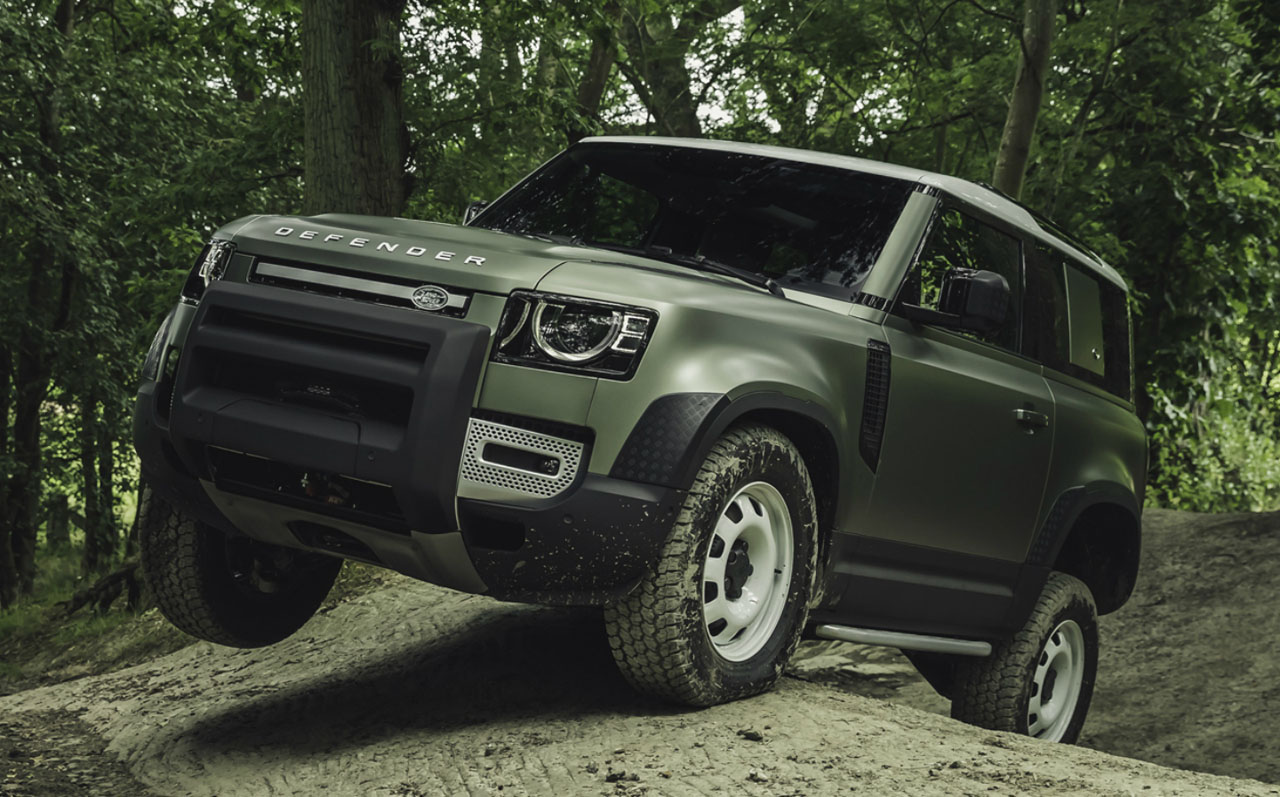 He knows how to overcome 45-degree ascents and lateral inclines, drive into a ford up to 90 cm deep. The entry angle is 38 °, the exit angle is 40 °. The roll angle is 31 ° for the short version and 28 ° for the long version. And all these parameters are very close to the original "Def".

And here are the innovations: the car has an intelligent mode that recognizes the conditions in which it is located. It can work both on the machine and manually. Here for the first time appeared the "ford" mode. 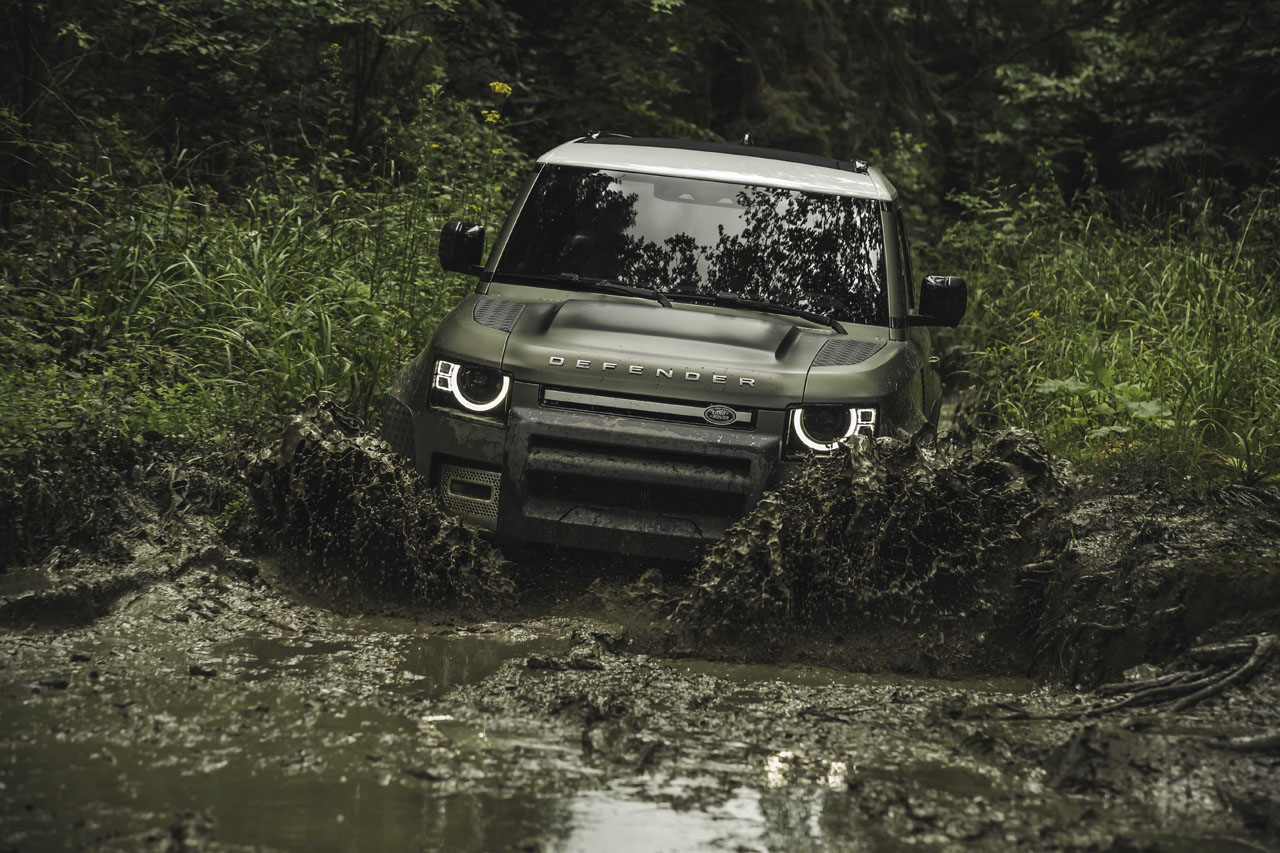 And indeed: if you can dive 90 cm, then why not? After turning on this mode, the car rises to the maximum height, differentials are blocked, Wade Sensing sensors display information about the ford depth on the display, and the air conditioner switches to recirculation mode. And after shutdown the mode of automatic drying and cleaning of brakes for safe driving turns on.

Read also:   iPad as a tool: how musicians use an Apple tablet

The chassis of the ladder type is replaced with a design with a supporting body. It is based on the aluminum monocoque D7x. Rear mounted multi-link Integral Link. Similar stands in Discovery and Jaguar E-Pace. Front – double-lever.

As options, you can choose adaptive air suspension with adjustable ride height or passive shock absorbers with steel springs.

All the engines of the new Defender are Ingenium units. They are paired with an eight-band automatic ZF and a two-stage razdatka. There will be four versions at first: 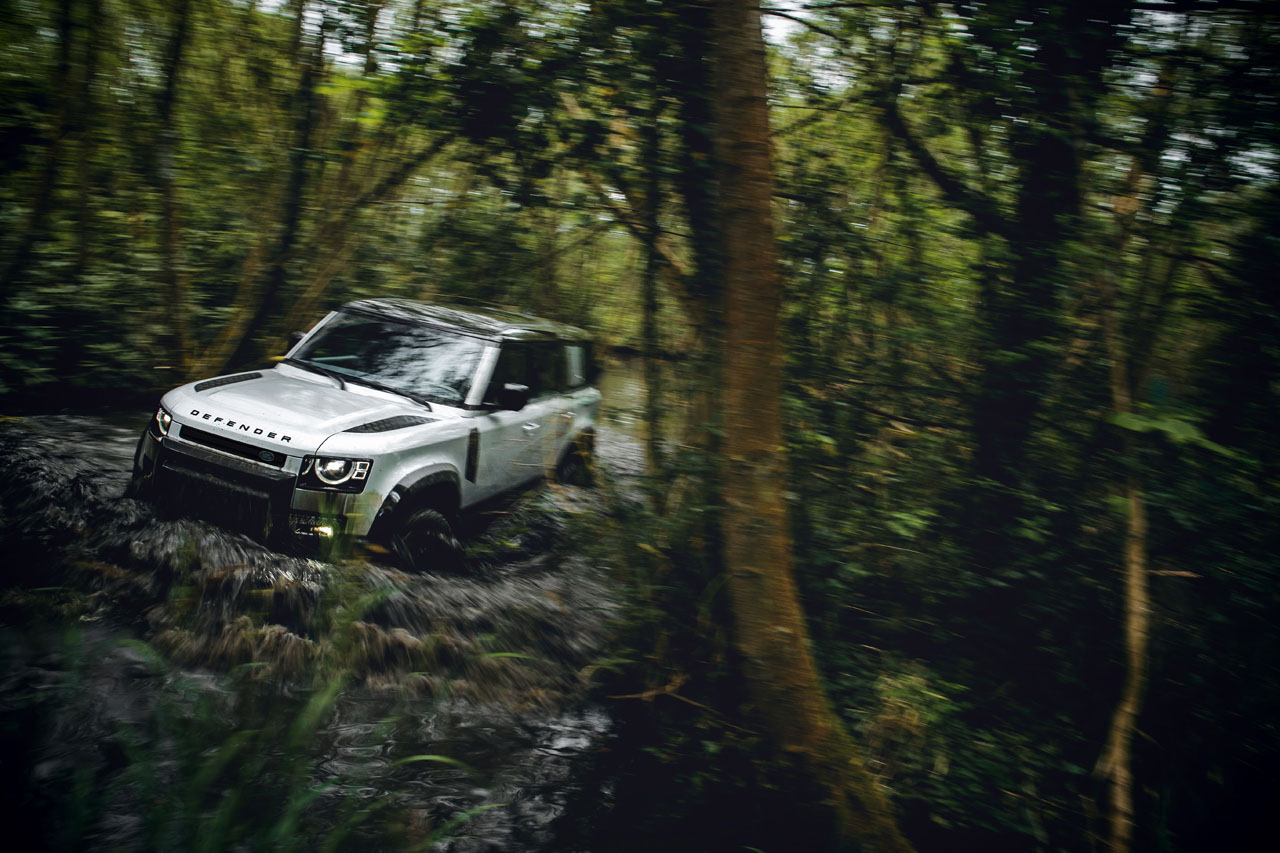 The EVA 2.0 platform is responsible for the operation of all subsystems of the car. It submits 85 electronic units. They can simultaneously process about 21 thousand system messages. And all this can be updated by "air". Including 5G – XXI century, after all.

It is clear that in the comments on social networks there will be many haters of the new “Def”. They will say that this is not the same car, the original Defender is dead and they did not arrange a normal funeral for him.

The new Defender is unlikely to cost as much as the old – official prices have not yet been announced, as well as the start of sales. But he will become a popular car: he has character and charisma. And that already makes Defender an outstanding car.

We all know very well that you cannot use simple passwords if you do not want to become a victim of hackers. However, many users still choose easily guessed passwords like 12345 or qwerty to log in to their account. They also use the same combinations for several accounts. This was reported by specialists of […]

iMac Pro with a 18-core processor is delayed until February

The basic configuration monoblock with 8 and 10-core processors can already be ordered, but the more powerful model will have to wait. Recently went on sale, the most powerful computer Apple – iMac Pro. This is a professional device designed for compute-intensive tasks like rendering 3D graphics, editing videos and photos, as well as recording […]

The delivery time iPhone X was reduced to a few days

iPhone X in some countries can be delivered to the buyer within three working days. In early December, the smartphone was delivered to US within five working days, and in Russia — in one to two weeks. Now in both countries, the flagship can be obtained in a period of one to three days. A […]