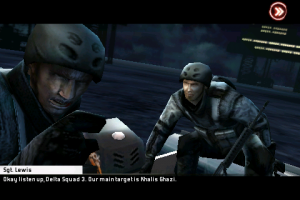 About a year ago, Gameloft launched a military shooter called Modern Combat: Sandstorm. The game instantly became popular among fans of 3D-action games and rightfully received the title of one of the most interesting developments in its genre. Modern Combat 2: Black Pegasus will allow you to finish what you started in the first part of the game. New military campaigns await you in the Middle East, Europe and South America. In addition, the game received many innovations: improved gameplay and graphics.

Modern Combat 2: Black Pegasus includes 12 missions, each of which takes place in separate corners of the world. You can choose one of four difficulty levels. You can choose from a wide variety of equipment and weapons – AK-47, MP5, sniper rifle, grenades and much more. If you own an iPhone 4 or iPod Touch 4, then you can use the gyro function for more convenient character control. 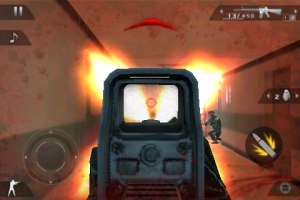 Modern Combat 2: Black Pegasus has a multi-user mode, so you can use bluetooth or wi-fi to play together with friends.

Modern Combat 2: Black Pegasus is available on the AppStore. The cost of the application is $ 6.99.

To download and install Modern Combat 2: Black Pegasus it will be more convenient to use iTunes. The fact is that the game "weighs" 481 MB (uncompressed – 710 MB). If you encounter problems during installation or during the game, then you should restart your iPhone.

Read also:   Apple has released a special version of the headphones Beats Solo3 and dynamics of the Beats Pill+ in the framework of the program (PRODUCT)RED

With the release of iOS 9, many users refused to jailbreak, and some can’t afford it because of the exploit yet. Resource iOSgods found a way to bypass limits in games on iPhone and iPad without hacking devices. We are talking about in-game purchases that unlock new features in games that allow you to obtain […]

At the weekend, Apple sent users of the iCloud service, informing them about the cancellation of a paid subscription. Now the company has brought users apology, noting that the emails were sent by mistake. Currently, iCloud offers six different subscription options. Memory shared between all devices connected to one Apple ID. It can be iPhone, […]

The authors of the project CoolBooter offered iPhone users the ability to simultaneously load two different operating systems – iOS 6 and iOS 9. To take advantage of the decision by the owners of a 32-bit jailbroken devices. Dual boot is often used on a desktop OS. That is, the user installs on the same […]