Microsoft showed how popular looks simulator Minecraft in versions adapted for augmented reality glasses Hololens. The demonstration held at the press-conference, dedicated to the industrial exhibition E3 in Los Angeles. 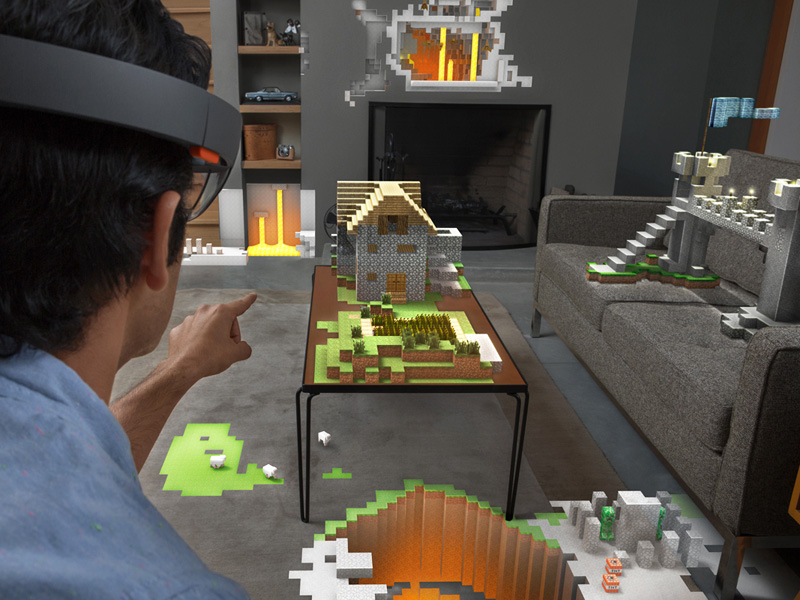 Their first virtual reality glasses HoloLens, the company Minecraft showed early in the year. Wearable on the head of a holographic display according to the intention of the company that brings together the real and virtual worlds.

The device Hololens looks like goggles for downhill skiing. Glasses is a semi-transparent screen, the device imposes digital graphics objects in the world. In glasses built a new virtual reality technology Microsoft Holographic, which is integrated in Windows 10.

At the E3 conference the audience clearly showed how virtual levels will be rebuilt in the form of holograms in the real world. Recording of the presentation published on YouTube.

When Minecraft for Hololens will be available, not reported. The device is also no exact date of release. “We’re dreaming about holograms,” a Microsoft representative has announced a new device. In Redmond called HoloLens “the most advanced holographic computer, which ever saw the world”.

Minecraft is a hybrid survival simulator and virtual design. In 2014 Minecraft appeared on the Xbox One and PS4, were previously issued versions for Xbox 360, PS3 and PC. There are also versions for iOS and Android. The developer was acquired by Microsoft in 2014, the transaction amounted to $2.5 billion.

Roman Abramovich has invested $10 million in the Driveway application, analyzing the behavior of drivers

Russian businessman Roman Abramovich has invested $10 million in startup Driveway Software Inc., in order to collect information about the behavior of drivers on the roads. This is stated in the message of the company. Designed Driveway mobile app installed on your smartphone insured driver and collects information about its behavior on the road. According […]

Last year Apple released the iPhone 6 and iPhone 6 Plus equipped with 4.7 – and 5.5-inch screens respectively, whereas all previous generations starting with iPhone 5 with 4-inch screens. But already in 2015 the company plans to return to this form factor, as reported by informed sources. The undoubted commercial success of the latest […]

Apple pays special attention to quality and shooting capabilities of the iPhone. According to another patent, in Cupertino are thinking about how to improve the main camera of the smartphone without increasing the housing dimensions. According to two recent Apple patents in future smartphones may receive the optical stabilization, is able to take pictures with […]