A team of engineers research division of Microsoft Research spoke about his new project MobileFusion, in which the creation of a smartphone app that turns your device into a mobile 3D scanner. The quality of the models is quite enough for home 3D printing, and the program does not require an additional camera or a Network connection. 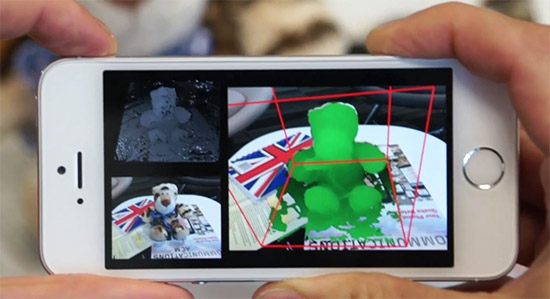 The process of 3D scanning with MobileFusion is the photographing of an object by using your smartphone’s camera from different angles. In the process, the application performs the creation of a model in real time, comparing the image of the object with its neighboring images. In the future, the scanned object is separated from its background, preserved, and they can be shared with friends on social networks.

Previously, developers from Microsoft Research was working on a project Kinect Fusion, which has the same functionality, however, requires for its work as the console Kinect and a computer for processing images. Comparing between the accuracy of representation of various objects in these two technologies, the creators found that the build error when using a smartphone for 3D scanning does not exceed 1.5 cm.

MobileFusion will work on smartphones with iOS, Android and Windows Phone. To submit a working version of Microsoft promises in October at the International Symposium on mixed and augmented reality ISMAR 2015.

Apple admitted that AirPods Pro have problems with sound & nbsp

In recent months, some AirPods Pro users have complained of crackling sounds coming from their headphones. This week, Apple has released several support articles that advise users on troubleshooting issues. If you have any problems with AirPods Pro, then the manufacturer recommends: Make sure the latest software is installed on your iPhone, iPad, iPod touch […]