September 7 at a special event in San Francisco Apple unveiled its flagship iPhone 7 and iPhone 7 Plus. On the website the company has published detailed specifications for both models. iPhone 6s, iPhone 6s Plus, and iPhone SE still remained in the line and become cheaper. What should pay attention when choosing the Apple smartphone?

Visually the iPhone 7 look like its predecessor, the main changes are hidden “under the hood”. The device is equipped with new Quad-core processor A10 Fusion coprocessor M10, which was a big step forward in terms of performance and energy efficiency compared to the A9/M9 installed in the iPhone 6s and iPhone SE.

The most interesting innovations concern the camera. iPhone 7 Plus has received a double module, while the 4.7-inch iPhone 7 increased sensor and optical image stabilization. Despite the fact that the resolution remains at 12 megapixels, the picture quality will be much better with f/1.8 aperture, optical zoom into the iPhone 7 Plus, as well as flash with 4 LEDs. Front camera is also better, now its resolution is 7 megapixels.

Not to mention the lack of a headphone Jack in the iPhone 7. But there was stereo sound, touch button Home and protection against dust and moisture according to IP67 standard.

Read also:   Passengers of buses and trolley buses can pay the fare using your iPhone

The most affordable model of the iPhone 7 has 32 GB of internal memory. Also, buyers options available with 128 and 256 GB drive. iPhone 6s now also comes with 32 GB instead of 16. Apple decided to replace the usual color Space Gray from two conventional black and “black onyx”.

Finally it is worth noting the increased battery capacity of the iPhone 7 compared to iPhone 6s/6s Plus. Coupled with the new A10 processor it is possible to increase the battery life for 2 hours.

Below you can see a comparative table of the characteristics of the iPhone 7/7 Plus, iPhone 6s/6s Plus, and iPhone SE. 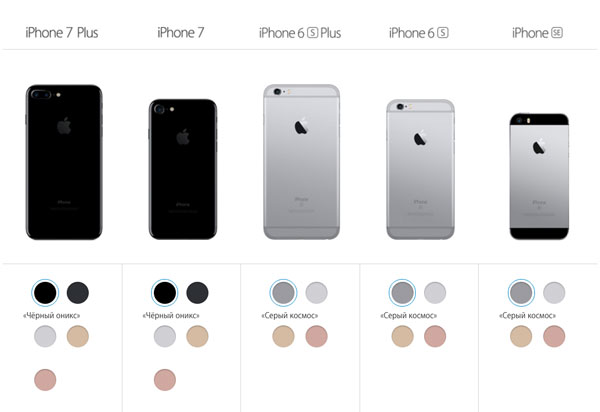 The mobile Apple devices missing the Ethernet port — but in life anything can happen, including a situation when at hand, no wifi, no computer, and surf the Internet very necessary. Specially for such cases, the German company Rebotnix Technologies has developed the RB adapter-Connect, allowing you to go online with the iPhone and iPad […]

Recently we wrote about the fact that Apple launched a new advertising campaign Shot on my iPhone. In Cupertino decided to switch from the promotion of the capabilities of the camera of its flagship phones to video recording capabilities and has published a set of nine videos. Today arrived in time replenishment. To view a […]