This year Apple is going to conquer the smartphone market with an updated camera with a resolution of 12 megapixels, shooting video in 4K and, most importantly, display with a 3D Touch. Technical characteristics of the new iPhone 6s and 6s Plus look very impressive. Even the appearance that the novelty has received from its predecessors, fresh and still winning against the competition. 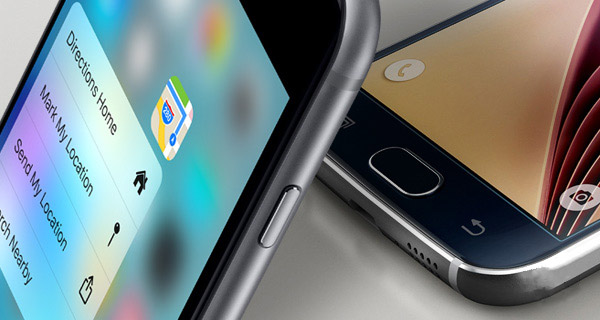 But the industry is not standing still. Thus, the famous tech giant from South Korea a few months earlier had offered his vision of the advanced smartphones of 2015 model year. The device was decent and quite productive. Offer a detailed comparison of the iPhone 6s and Samsung Galaxy S6.

Design – a very controversial thing. To each his own, as they say, but without comparing the appearance of the flagship can not do. Both smartphones look modern and futuristic. The combination of all-metal enclosure and a 2.5 D glass iPhone 6s, covering the front panel, is one of the most beautiful on the market. In this regard, Samsung can oppose Apple only model from the line edge with lateral bending of the display. Galaxy S6 is dressed in a body made of glass and metal. 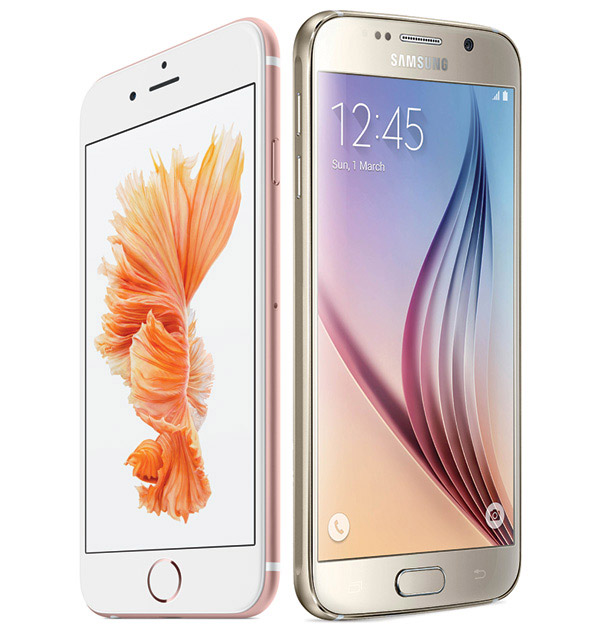 The display, which is 99% of the interaction with the smartphone, of course, is a key component of smartphones. iPhone 6s is equipped with a 4.7-inch Retina HD screen with a resolution of 1334 x 750 pixels and density of 326 ppi. The smartphone has innovative recognition function of the pressing force, which opens towards the user new ways to interact with the interface. The video below demonstrates the principle of the 3D Touch: 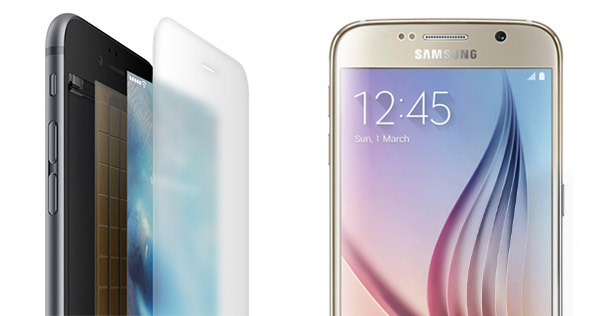 Important role in the perception of the mobile device plays its computing power. Samsung completes its advanced single-chip phones platforms Exynos 7420 with 8-core processors, built on the basis of two Quad. One cluster Cortex-A53 running at 1.5 GHz, a second, more powerful Cortex-A57 – at a frequency of 2.1 GHz. In the presence of 3 GB of RAM.

Apple uses in the iPhone 6s 64-bit chip, a new generation A9, assisted coprocessor M9 and 2 GB of RAM. According to the preliminary results of testing greatly exceeds the performance of its predecessor A8. 4.7-inch Apple smartphone release of 2015 shows in “single core” 2248 test scores, and multi – 4036. The performance modifications of the previous generation – 1610 and 2883. The result Exynos 7420 in the same benchmark are 1204 points for “single core” mode and 4107 – in use all cores.

The Galaxy S6 more RAM than the iPhone 6, but the best optimization software allows “Apple” smartphones make better use of RAM.

Operating systems iPhone 6s and Galaxy S6 are as different as close to each other. But the devil is in the details, that forms the so-called experience. Galaxy S6 runs on the latest version of Lollipop 5.1 with its own shell Samsung TouchWiz. iPhone 6s proprietary controls iOS 9. The difference between the systems in philosophy.

Previously, everything was really simple: if you want an emasculated platform built by perfectionists, choose iPhone. If you need the freedom of choice of devices and the ability to fine-tune the system for yourself, look in the direction of Android. But now such stereotypes can be sent into retirement. Subjectively, both OSes are becoming more like each other. Android is gaining something for that iPhone and iPad users have always appreciated in iOS aesthetics, simplicity and convenience. In turn, iOS increases functionality and customization.

Both OSes subjectively becoming more similar to each other. Android is gaining something for that iPhone and iPad users have always appreciated in iOS aesthetics, simplicity and convenience. In turn, iOS increases functionality and customization.

Aside from analytical thought and will return on the tangible level. While the Galaxy S6 received a battery of 2550 mAh, the iPhone 6s is content with a much smaller capacity – 1715 mAh. Significant, it would seem that the difference, which brings us into the lead South Korean smartphone, but no. Apple once again comes to the aid of optimization in conjunction with a smaller screen resolution and cost-A9 processor. By the way, the iPhone 6s battery has become even weaker than in the predecessor. But the battery life remained the same. 14 hours of talktime and 10 days standby; LTE-enabled iPhone will work for 10 hours, and the use of Wi-Fi for 1 hour will increase the life span of the batteries. Samsung is silent about specific numbers.

Is that part of the device is much more important for many cores and GHz. A good PV panel rather gadget will provide an advantage, rather than a powerful CPU. Galaxy S6 and iPhone 6s are endowed with cameras with a resolution of 16 and 12 megapixels. Both can shoot video in 4K. To draw conclusions about the superiority of one or another camera, will have to wait for benchmarks.

The price of the flagship devices is very high, especially in the Russian realities. Korean gadget with 32 GB of flash memory in our country is 35 990 rubles. For iPhone 6s is rumored, will ask 51 990 rubles for the minimum version with 16 GB of memory. It will be available in four colors for every taste: silver, space grey, gold and rose gold.

If we forget about the price, and be guided solely by a set of characteristics and appearance, both phones are a good choice. Samsung, getting rid of the glossy cheap plastic, has created a worthy competitor to Apple. Each gadget has its pros and cons, however, the adherents of the “Apple” ecosystem certainly already made their choice. The rest will have to focus on their own feelings – they just will not let you down.

Asus has introduced a new compact laptop Zenbook UX410. The intent of the manufacturer, the device needs to compete on the market the MacBook. One of the main features Zenbook UX410 is a 14-inch display, which is characterized by a thin framework. They are not as thin as the same Dell (6 mm vs. 5.2 […]

In the period from the second quarter 2015 to first quarter 2016 the hackers stole from the accounts of the users of Android devices in Russia about 348,6 million. This is reported by “Vedomosti” with reference to the research company Group-IB. According to the document, compared with same interval the year 2014-2015, the amount stolen […]