Since the popularization of smartphones to users is the problem of low autonomy of mobile devices. Large touch screens, powerful processors, energy-intensive applications – all in varying degrees contributes to battery drain. “Experts” advise to improve performance and increase battery life to manually close these applications. In fact, it’s one of the myths that exists since the first versions of iOS. 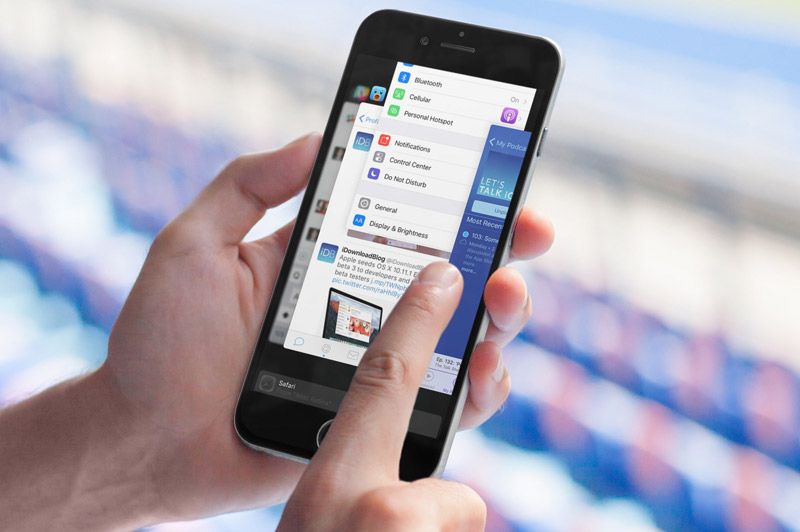 Many iPhone users tend to upload from the memory applications that are running earlier. Of course, multitasking works fine, but why take the extra megabytes of RAM? Moreover, rumor has it that several simultaneously running programs have a negative impact on charging. In fact, such a system has on the opposite. The paradox is that unload apps from memory only contributes to the accelerated battery drain.

To get started is to understand that the implementation of multitasking in iOS is at very high level. No matter what the haters, the “operating system” works perfectly even after running a couple of dozen applications. Sounds like praise, but no wonder Apple programmers eat their own bread. All developers are subject to uniform requirements on creation.

Another widespread myth is that forced closing apps will save the battery. Not allowing the system to manage all processes, you are making a mistake. The fact that the action itself on call the multitasking and unloading programs from memory consumes much more energy than their “work in background”.

Perhaps the majority will not believe and will think that it is a mistake to use the terms “background applications” and “energy efficiency” in the same sentence. Rest assured, reservations and other errors in terminology are excluded. Multitasking is started by double tapping on the Home button. A full closure of the programmes is carried out by swiping the window up (true for iOS 9). 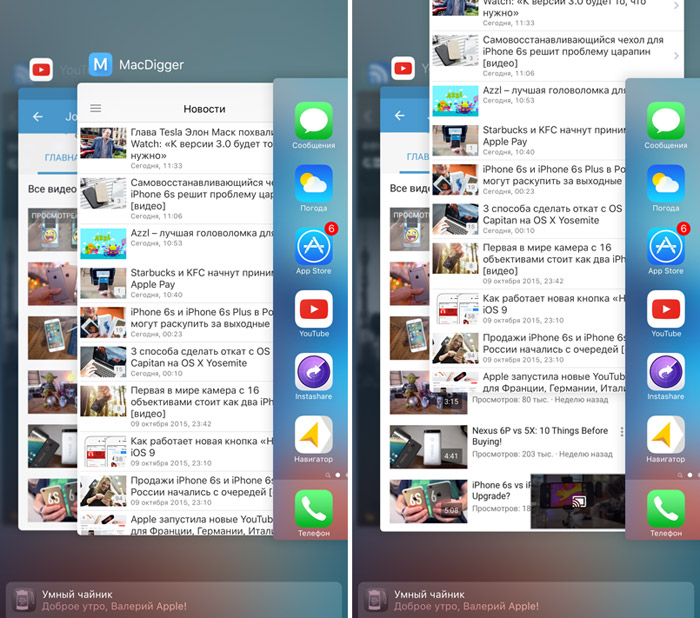 The reality is that once you exit the application, once you “tap” on the button “Home”, his work stops: the application ceases to apply to the CPU, and the memory that it occupied, with time released. Of course, there are exceptions when the system does not terminate the operation of the program in the background. For example, sending email messages, playing music or automatically download updates. However, even such “extravagance” of the “OSes” lean against the device.

When you manually close the application, the operating system should unload the task from memory, which leads to battery consumption. When reloading the same application system again you need to load it into RAM, which would also power consumption. Thus, force closing the apps you spend twice the battery life. While in memory, it does not affect his autonomy.

How multitasking in iOS

All applications in iOS there are five types of conditions:

Active and inactive for the topic uninteresting. Most of gets confused in situations where the application goes from active to background, then paused, and then outside.
When you press the Home button, the program switches from active to background. Most apps after a few seconds pass in suspended. The first technical caveat is that suspended app remains in the device memory. This is done to ensure that it can continue to work faster if you decide to go back to him. It does not use CPU resources and battery.

We can assume that if is in memory, then remove it from there to free up resources. In fact, iOS is doing it yourself. If you have paused the application and you run resource-intensive software, such as complex three-dimensional game, iOS itself unloads from memory the program is suspended and moves it to the disabled state. In other words it will be completely erased from the RAM and started from scratch upon next launch.

The main rule iOS multitasking is as follows: the multitasking panel is merely a list of recently used apps, regardless of what state they are in. The operating system automatically unloads the task when necessary.

In any cases, you should close apps and free RAM in the device? The answer is simple – in theory ever. Very rarely there are situations that should force you to restart the program. Is that hovering or incorrect work. Probably, it’s hard to believe, but iOS itself copes with the load distribution on the processor and battery. Apple products is a technique which you just need to use it, without creating unnecessary complexities.

The largest Russian network of stores of home appliances and electronics “Eldorado” began taking pre-orders for new smartphones from Apple, according to a press release received by MacDigger. Leave a pre-order for the iPhone 6s and iPhone 6s Plus any model and color. On the website “El Dorado”, you can choose any of the three […]

Analysts: the iPhone 8 has no chance to repeat the success of iPhone 6

Contract suppliers Apple has already started mass production of components for the iPhone 8. About it last week reported by DigiTimes, known for its connections with sources in the supply chain. Barclays analysts skeptical in regards to the market success of the anniversary the flagship of Apple, which, in their opinion, affect the rate of […]