While Samsung is preparing to officially introduce an 18.4-inch tablet Galaxy View, online retailers in the US have already opened pre-order the device. The gadget with a huge screen can be purchased at the price of 599 dollars. 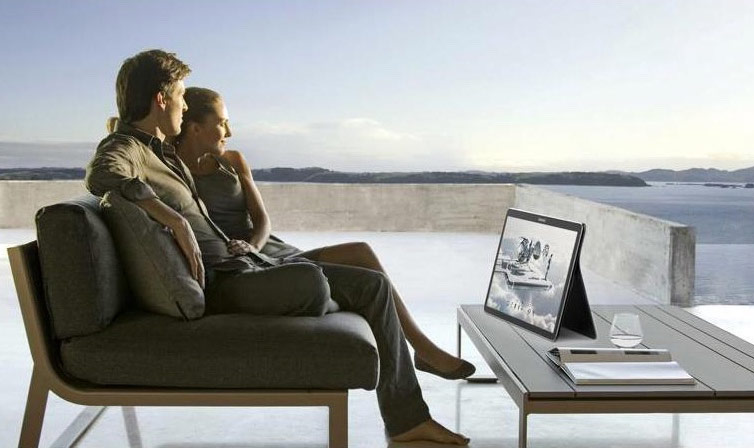 If the diagonal of 18.4 inch display, its resolution is just 1920 × 1080 pixels, which corresponds to the format Full HD. However, Samsung believes that a device with such characteristics is well-suited for content consumption. Judging from the press images, the company believes that Galaxy View there is a place in the kitchen and in the nursery.

Samsung has devoted considerable attention to the design of the tablet. It is equipped with original stand, whereby is permitted the use of virtually in the vertical and horizontal positions. This stand performs the function of carrying handles.

The device is based on processor Exynos lie 7580. It includes eight cores ARM Cortex-A53 with 64-bit instructions. The clock frequency reaches 1.6 GHz. The graphics subsystem Exynos 7580 made on the basis of the controller Mali-T720.

The tablet will get 2 GB of RAM, flash drive capacity of 32 GB, camera with 2 – and 8-megapixel cameras and microSD slot. The battery capacity of 6700 mAh will provide up to 8.5 hours of video playback.

As a software platform on the device to apply operating system Android 5.1 Lollipop. The timing of the official announcement of new products not named, but the opening of pre-orders by retailers indicates that the presentation is not far off.

Xiaomi allowed to import purchased on AliExpress smartphones. The piece

FCS received the right to pass to Russia parcels with AliExpress, which contain the Xiaomi smartphones for individuals. it is reported by RNS with reference to the representative of the customs. Before smartphones “Chinese Apple” spent a month outside the law: Orenburg customs checked the gadgets and sent them back to the sellers. Russian users […]

In the new version of mobile client YouTube the developers have added a feature to fast forward. This option was not stated in the list of updates, and was discovered accidentally by users. Rewind YouTube only works in fullscreen mode. In order to rewind the playback ten seconds forward, you need to double click quickly […]

According to rumors, the new Apple smartphones will be two SIM-cards

According to new data, the iPhone of 2018 will be the classic slot for the SIM card and its electronic equivalent the Apple SIM. Apple has long presented his vision of the perfect SIM card. The Corporation wanted to give users the ability to change operator when they want to. Therefore, in the iPad appeared […]