A resident of Hong Kong on behalf Tsang filed a complaint with Apple due to the fact that its a 128-Gigabyte iPhone 6 Plus exploded while charging. She claims that the reason could be a short circuit or overheating of the battery of the gadget. 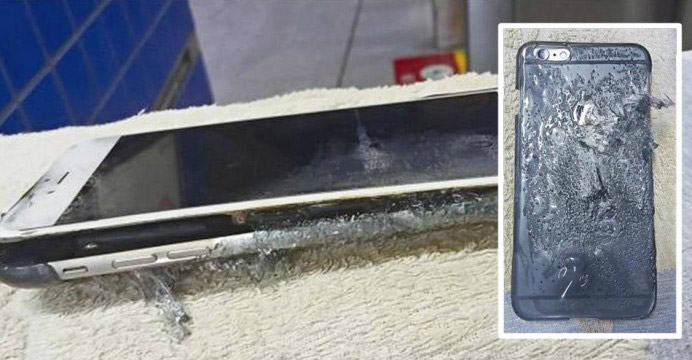 The incident occurred last week. The woman hooked the iPhone to the corporate power adapter Apple, and then went to bed. At approximately 8:00 a.m. she woke up from a loud Bang and smell of burning plastic. The woman discovered that her iPhone 6 Plus enveloped in thick black smoke. She quickly covered the smartphone with a pillow to stop the fire.

Tsang called Apple hotline on the day of the incident. Employees asked her to send photos of the damaged phone and said that Apple will give the answer in a few days. She also contacted the local service center, where she was told that they are doing only minor damage.

Tsang suggests that the cause of fire could become tablet adapter, a woman was charged in the battery from the power supply for the iPad. On the official Apple website, however, it is reported that the adapters for the iPad can be used to charge iPhone. The woman intends to seek compensation from Apple.

Note that this is not the first time an iPhone. Earlier it was reported about a similar incident in Brazil. Fire “smartphone” also occurred during the overnight charge. The device began to sparkle and puffed beside the bed of his owner. As reported by the Brazilian media, the user had time to Wake up and was not injured.

In the USA also recorded a case of spontaneous combustion iPhone. The owner of the Communicator told that the tube exploded on the nightstand near the bed, near her head while she slept. The device was connected to the mains.

Another similar incident occurred aboard airliner from New Zealand on approach to Sydney (Australia). iPhone 4 one of the passengers became red-hot and began to smoke. Fortunately, the surrounding got off lightly — raced in time to the aid of the steward promptly put out the gadget from a fire extinguisher.

Sales of “smart” watches Apple in the fourth quarter was a record, according to data of analytical company IDC. The company was the third in the Wearables market, increasing sales for the year by 13%. The market of wearable electronics in the reporting period rose to a record high. For the three months it was […]

Apple Watch ahead in popularity all smart watch on Android Wear

Today in the world there are about 1.9 million wearable devices running Android Wear. This is the conclusion reached by the author of the blog the Overspill Charles Arthur, after studying the statistics of Google Play. Although recently the number of gadgets based on Android Wear increased (in February 2015, there were 1.2 million pieces), […]