The developers of Facebook Messenger plan to add in messenger feature of disappearing messages. Currently, it is already being tested by the social network. To switch to the desired mode the user will simply press the hourglass icon in the upper right corner.

The function of “self-destruction” could be activated to any conversation. Enabling this option will trigger a timer for the message will automatically disappear from the feed after a specified period of time. The user can choose 1 minute, 15 minutes, 1 hour, 4 hours or 1 day. After sending confirmation, data is transferred to the interlocutor. Mode will only work for the selected conversation, and not all of messenger users, and can be disabled at any time.

The condition for receiving self-destructing messages – there is a new version of the messenger. To recover data after removal will be impossible. On the Network available screenshots of the iOS version of Facebook Messenger updated for iOS.

A similar function was originally founded in the messenger Snapchat, where the photos and videos self-destruct after a few seconds, or 24 hours after viewing. Recently similar features have been launched and some other applications, including popular in Asia, Line and WeChat. 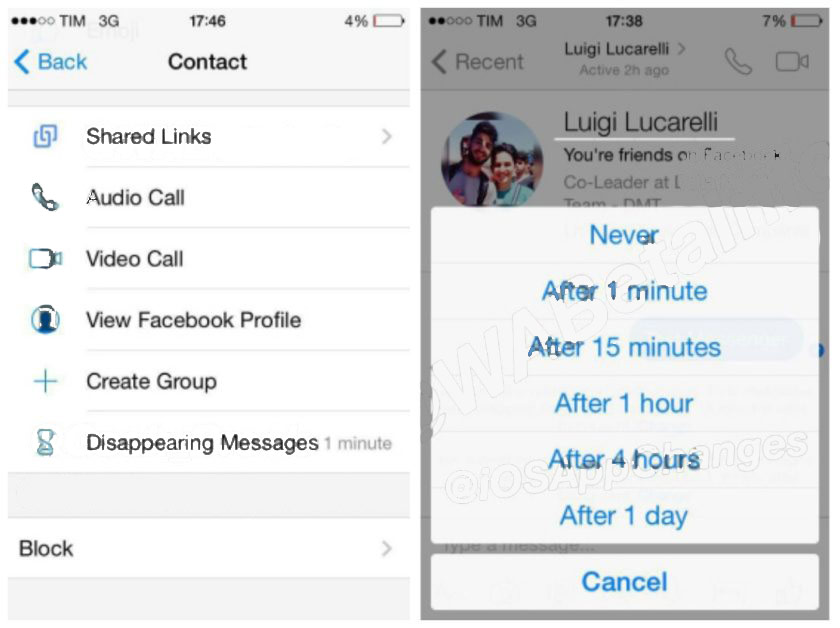 At the end of 2015 in Russia popular messenger Viber has also launched a disappearing message. The feature is available to all users after installation of additional applications Wink and represents an opportunity to send self-destructing messages/photos/videos.

The precise date of widespread implementation of a new feature in Facebook Messenger is still unknown. The administration of the social network has no comment.

There are several ways to recover deleted contacts on iPhone. Three most simple of them is to use the saved version of iTunes, go to backup to iCloud or to install Dr. Fone. Sometimes important contacts deleted accidentally. But all is not lost and data can try to restore. Restore contacts using backup on iTunes […]

Rostelecom will launch a new mobile messenger “alle” in December of this year. As reported by “RIA Novosti”, said senior Vice-President, development and business management of the company Vladimir Kiriyenko. About the project “Hello” became known in the beginning of this year. A distinctive feature of the new system will be binding to the landline […]

Apple has released iOS 9.3.2 for iPhone, iPad and iPod touch

Apple ahead of schedule released the final version of the iOS operating system 9.3.2. The Assembly is aimed at correcting errors and improving your company’s mobile devices. Update iOS 9.3.2 weighs in at 1.6 GB and contains a small number of changes, they mainly relate to the elimination of the revealed errors, improve the stability […]