At factories of Apple supplier Pegatron in China, the Group recorded gross violations of labor rights of workers. This statement was made by a non-profit organization China Labor Watch. 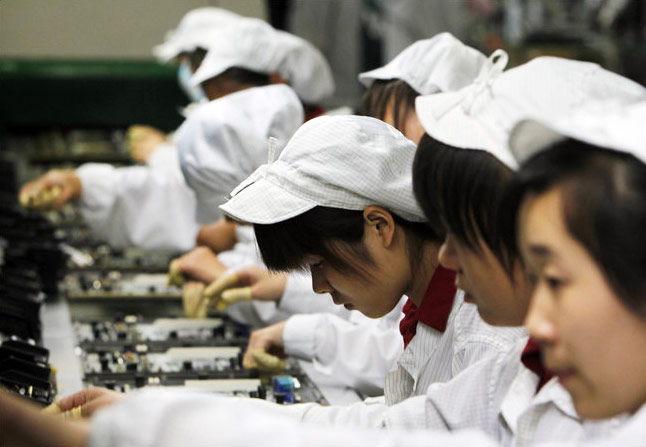 “The company in Shanghai employees are working extremely hard for 12 hours six days a week”, – stated in the report the organization released on Thursday. According to human rights activists, violations also include the virtual absence of a course on safety for new workers.

“The human rights activist from China Labor Watch has been working undercover at the company Pegatron in Shanghai. He never said, where are the emergency exits, and he did not participate in the training for action in emergency situations”, – stated in the document. The Pegatron manual requires collectors iPhone and iPad to sign a document allegedly completed 20 hours of training to perform hazardous work.

“Production of the iPhone involves interaction with a large number of chemical materials… However, no one says a work about the location of these chemicals during the production process or about what safety precautions must be observed to avoid injury,” said China Labor Watch.

The organization notes that salary employees Pegatron is only $318 a month, or $1,85 per hour, and the rest break was provided to them only after the overtime.

The living conditions of those workers, Pegatron, also leave much to be desired. “In the Pegatron dormitories in the room live up to 14 people, the walls there covered with mold, in rooms full of bugs,” reads the report.

In 2013, China Labor Watch accused Apple of non-compliance of the working conditions of employees of their enterprises in China, such as international standards and Chinese laws. Then Executive Director of Pegatron Jason Cheng said the company took the allegation “very seriously” and would conduct a full investigation of the revealed violations.

Apple has accumulated more than $250 billion in cash, which is not going to waste any way. This was reported Monday by the WSJ. Guide the Apple every new product launch and each quarterly report of profits begins with the words of the record indicators. Was no exception and the first quarter of the 2017 […]

It is impossible not to admit that “smart” watch Apple Watch, the first generation was not perfect. The main disadvantages of the device became slow and complex interface logic. The initial study of the possibilities and getting used to the menu, the Apple Watch requires much more time than in the case of iPhone or […]

Samsung has demonstrated the advantages of AMOLED screens over LCD [video]

Samsung has released a promotional video, which showed the advantages of AMOLED screens over LCD displays. Displays organic LEDs are used in smartphones, the South Korean company’s LCD panels used in iPhone, iPad or devices of some other manufacturers. The main advantage of AMOLED displays, as noted in Samsung – hundred percent coverage of the […]