A startup from California Hudway has created an automotive unit that displays navigation information from your smartphone on the windshield. This increases the convenience of obtaining useful information and has a positive effect on traffic safety, as sitting behind the wheel of the person does not have to be distracted from the road. 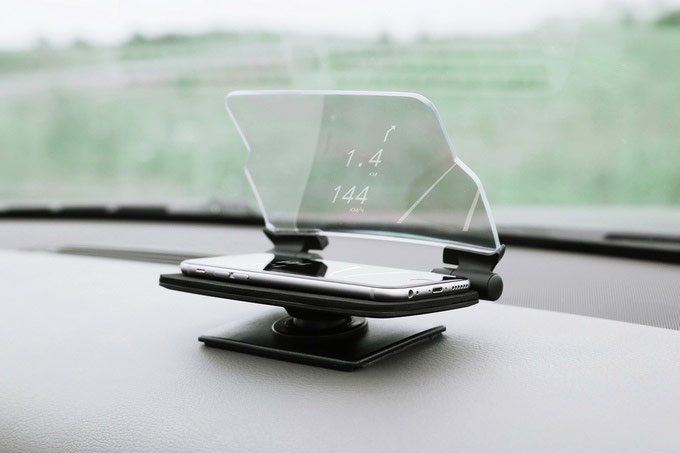 According to statistics, only due to poor visibility on the roads every day in the world, 350 people die. Hudway was originally a smartphone app, which was intended for use in rain, fog, heavy snow or just dark. The image on the screen of the smartphone is reflected from the windshield, and the driver didn’t have to look away from the road to look at the Navigator.

Then it was decided to create an accessory that would provide the same functionality even in bright daylight. Hudway Glass is attached to the dashboard right in front of the eyes of the driver on your smartphone you can install a variety of app for the projection of the road, GPS navigation, displaying speed and so on.

The smartphone can display on glass information such as current speed and its limit on this stretch of road, distance to next turn and the needle indicator, estimated time of arrival, etc. in addition, the HUD display will notify the driver about speeding, traffic and safety camera.

The idea Hudway interested users Kickstarter, which the creators have already collected about 445 000 dollars for a planned $ 100,000. Start of sales of new products costing $ 49, will be held in March 2016.

Belgian company Sliden’Joy offered an interesting alternative to the monstrous static monitors for which you want to look for a place on the desktop. This alternative are additional portable screens designed for attachment to notebook displays. The development is a system mounted displays that connect to the laptop and allow you to increase the size […]

How to listen Apple Music and not to expend web traffic

Apple Music – streaming service designed for online listening multimillion-dollar collection of tracks from my iTunes collection. Despite this, the tariff plans “honest” unlimited Internet is still relatively rare, so you’ll want to save some traffic using the greedy service. Apple Music allows you to save songs, albums and playlists on the iPhone or Mac […]

This year, Apple is expected to release a smart watch Apple Watch third generation. They, like the previous modifications, will receive the organic led display. And their successor, which will be released in 2017, will be equipped with OLED and micro-LED-display, the development of which is investing in Apple. In 2018, the company plans to […]