HTC has launched a series of promotional videos to demonstrate the superiority of the flagship HTC One M9 on the iPhone 6 and Samsung Galaxy S6. Each video is a blind test, which compares the capabilities of smartphones. And each winner goes One M9. 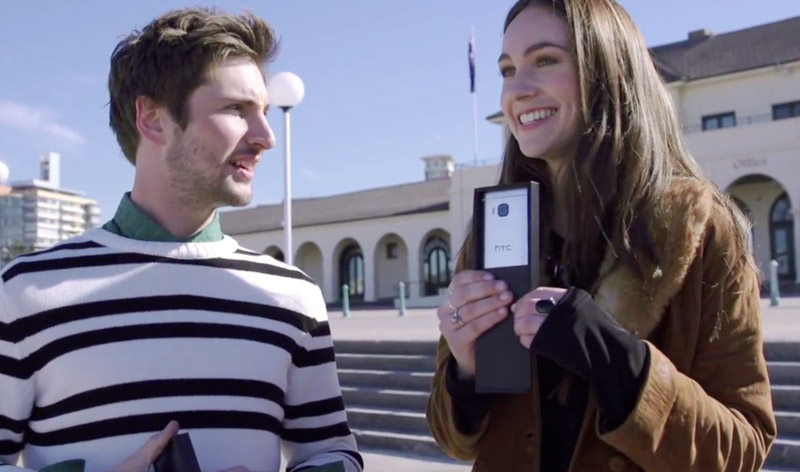 The plot of the video clips, walks along the beach people with smartphones and invites passers-by to compare them. Gadgets placed in a black body, so that the participants could not identify the model.

In the first video “Speed” were asked to evaluate the speed of the HTC One M9 and Samsung Galaxy S6. The guy and the girl in turn launch the app with the home screens and compare the result. The participants in the study come to the conclusion that the One M9 can do it for 20 seconds faster than your opponent.

In the movie “Sound” enthusiast opposes the audio functionality of the HTC One M9 and iPhone 6. And again the Taiwanese gadget with two front speakers is the leader the girl chose the One M9. Finally, in the test with the speaker called “Selfie” was asked to compare the capabilities of smartphone cameras for shooting selfies. The girl was surprised at how much better photos of HTC One M9 than the iPhone 6.

Massive promotional company for One M9 is the beginning of the month. To promote its flagship HTC even invited actress and model Kelly brook, who in 2000 was recognized as the sexiest woman of the last century. The authors of the ads don’t have to reinvent the wheel, and turned to long time friend Marilyn Monroe. The shooting took four hours and 440 litres of liquid gold.

In St. Petersburg, the robber did the shooting in the Apple store

According to the website “Fontanka” in St. Petersburg robbers carried out a robbery at the store “Apples” that sells Apple products. As told the General Director of the shop, the stolen MacBook costs 130 000. On Sunday evening, September 27, in the store on the 5th Krasnoarmeyskaya street, Admiralteysky district of St. Petersburg became a […]

Foxconn and Pegatron are not only the largest producer of gadgets in the world and a major assembler of Apple products. The Chinese company is closed the whole Empire, living by its own rules, where it is almost impossible to get outsiders. A series of suicides and the subsequent validation partners forced Apple to promise […]