The price of flagship smartphones in recent months, reduced by strengthening of the ruble. The experts online service Goods Mail.Ru analyzed how changing the value of Russia’s most popular smartphones from December 2014 to mid may 2015. In preparing the material we compared the prices of more than 2 000 stores. 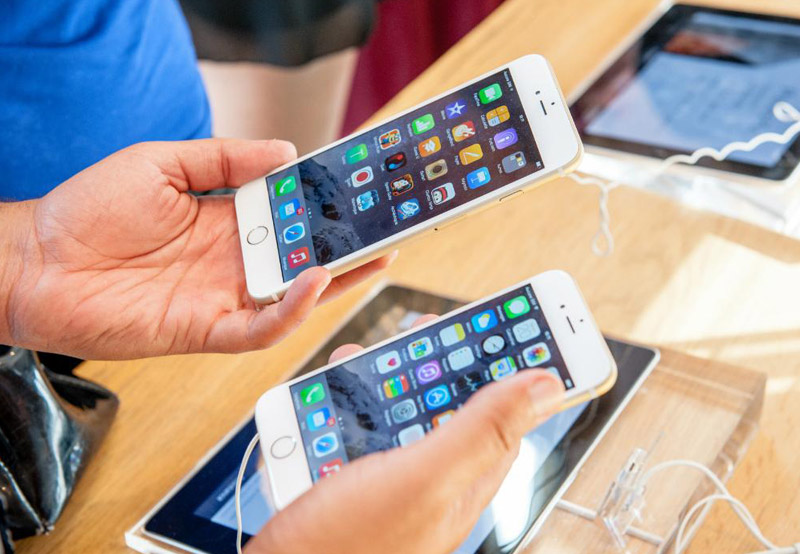 The peak of the average price of iPhone 6 16 GB (slightly more than 49 000 rubles) was in March, despite the fact that the Russian currency began to steadily grow after 3 February. Fully pre-crisis prices for iPhone 6 in may still not become (in December smartphone worth an average of 43 024 rubles in may — a little more than 46 000).

Similar dynamics was observed in the case of the iPhone 6 Plus with 16 GB of memory: rising prices until March, then the fall is sharper than the younger models. Consequently, in may iPhone 6 Plus 16 GB can be purchased for about the same money and in December (about 48 000).

“The fall of the ruble retailers were saying the same thing: higher prices. However, not all brands price rose evenly. Thus, greater total c December to February increased the prices of Nokia Lumia 930 and Samsung Galaxy Note 4 is 17.5%, with the second smartphone prices in may to pre-crisis levels have not returned. With the strengthening of the ruble, prices began to decline, and increasingly those brands that have made them the most (Apple, Samsung),” — commented on the results of Analytics.

Least fortunate buyers who decide to purchase the HTC One M8 in February — then its price was the highest (about 31 500 rubles). However, the growth rates from December to February was just over 10%. In the spring of smartphone fell back to the January reading (30 261 ruble).

READ  MasterCard offers to use a selfie instead of passwords

The price of LG G3 in Russia practically has not changed, although some increase in prices was recorded until February. In may, he even worth 2000 rubles cheaper (22 909 rubles) than in December (25 058 rubles). In all likelihood, this trend will continue, since the model is not new.

Nokia Lumia 930 December and January “experienced” with almost the same price, but in February, the model has risen sharply. Now the monthly cost of a smartphone is down, but it’s almost imperceptible, and it was the gadget is relatively long, and all who wanted, have already managed to buy it. In December, the average smartphone cost 23 725 rubles in may, its price is 26 692 ruble. 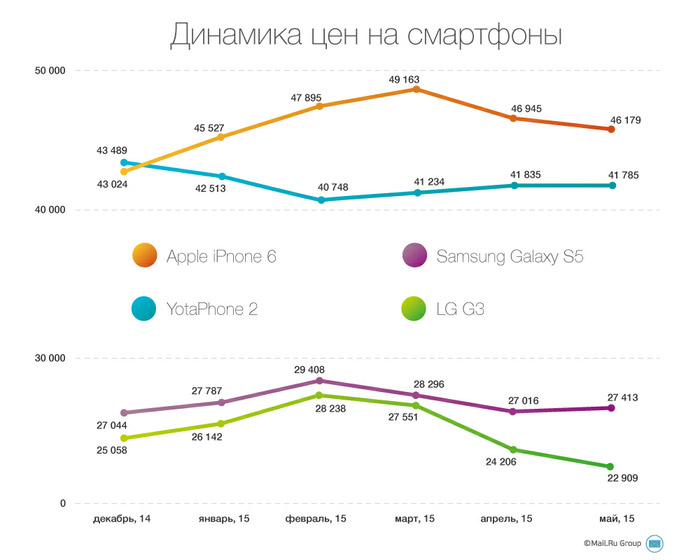 The prices of Samsung Galaxy S5 was grown from December to February, and in April returned to the December values (just over 27 000). In may, the price has again risen, that after the premiere of S6 and S6 Edge in mid-April rather strange. Another product of the company, Samsung Galaxy Note 4, showed a more obvious dynamics with a peak in February and the consistent decline in the following months.

The Sony Xperia Z3 in February offered at the maximum price, and then began to decrease, albeit slightly. Now the cost of the smartphone is about 34 500 rubles, as against 30 500 in December. Most likely retailers will continue to reduce the price of this smartphone, although not as fast as on other gadgets in the same price category.

Finally, the first Russian smartphone YotaPhone 2, contrary to all the laws of the market, cheaper when other gadgets sharply rose in price. But then, as if in defiance of the foreign manufacturers of smartphones began to rise. The company promised in the near future to reduce the cost of the YotaPhone 2 to the Russian development could compete with the A – and b-brands.

Google is at the presentation on Tuesday unveiled its own smartphone Pixel and Pixel XL. The creators of the gadget has paid particular attention to five key areas: integrated voice assistant Google Assistant, quality camera, cloud services, instant messenger and virtual reality. Just announced two models: Pixel and Pixel XL. They are the most similar […]

With the beginning of closed testing iOS 10 in the Network has a rather interesting conceptual video created by the British DeepMind project. The authors have thought through the interface of READ  Consumer Reports calls the image on the screen of the Galaxy S8 “attractive natural” even with a red tint

Tim cook explained his words about the death of personal computers

Apple CEO Tim cook announced the words that at present the need for personal computers disappeared. The comment referred to the Director-General’s statements, made last week in an interview with the Telegraph. “I think if you look at the PC, then the question will arise: why you still need to buy it? No, really, what […]