In recent years, the world economy is undergoing profound changes and that’s partly why we witness many geopolitical conflicts. The fall in the market value of the Russian currency is associated with a sharp decline in oil prices and sanctions by Europe and the USA. At the rate of 75 rubles per Euro to afford to purchase an iPhone may not all inhabitants of Russia. Newspaper the Village decided to find out how much the purchasing power of Russians in the iPhones under different exchange rate. 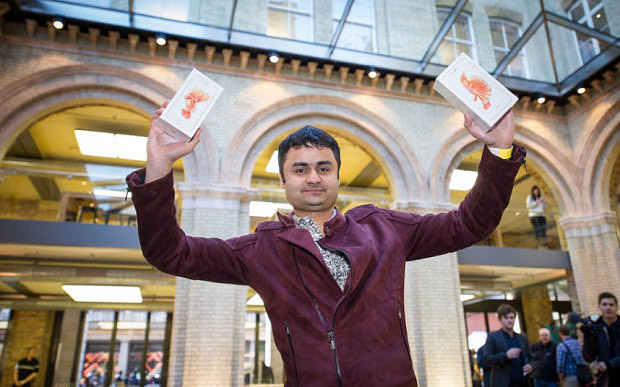 For the calculations we used data on the average salaries of residents of different regions from Rosstat and Eurostat for the year of 2014, and average price for iPhone research from ABI Research and the WSJ. The Euro can be changed by moving the slider at the bottom of the card: the salaries are automatically converted in Euro at the established rate, and the picture of purchasing power, expressed in Apple gadgets, changes. For example, on the map you will notice that the Euro rate at 75 roubles in the Volga region and Northern Caucasus are poorer Eastern European countries. But at the approach of the Euro to 100 rubles high purchasing power is preserved only in Moscow and several other Northern regions of Russia. 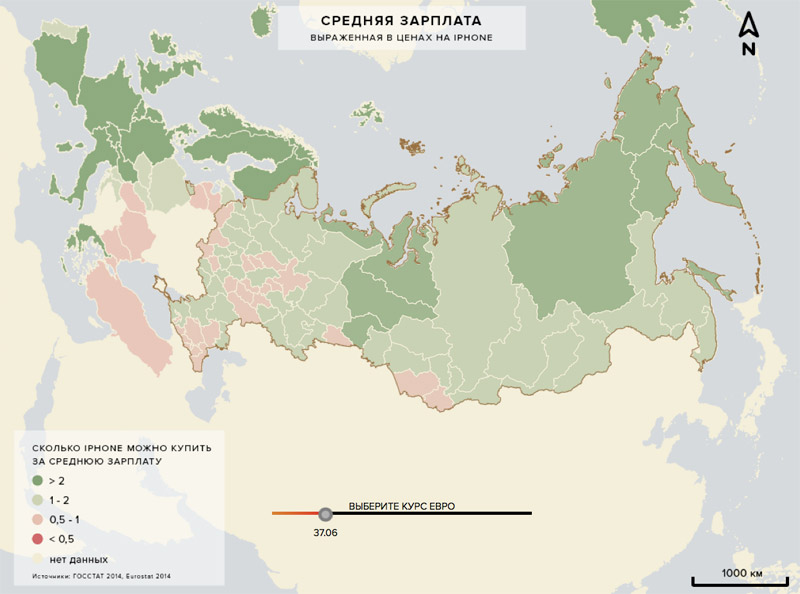 “iPhone is a product that is sold around the world under one price policy. The price in Euro on iPhone fixed, and if we convert the national currency — roubles — in EUR, then we can talk about the purchasing power of Russian citizens for imported products. The basket looks more like a basket costs modern affluent citizens who traveled abroad, enjoyed modern technology, wore designer clothes, ate dinner and had Breakfast in the cafe. But the map does not cover the Essentials. It shows how affected and middle class is suffering because of the fall of the ruble. While in all regions the biggest blow fell on Moscow, though it is painted green, and almost all other areas — red,” – says the partner at Cushman & Wakefiel Denis Sokolov. 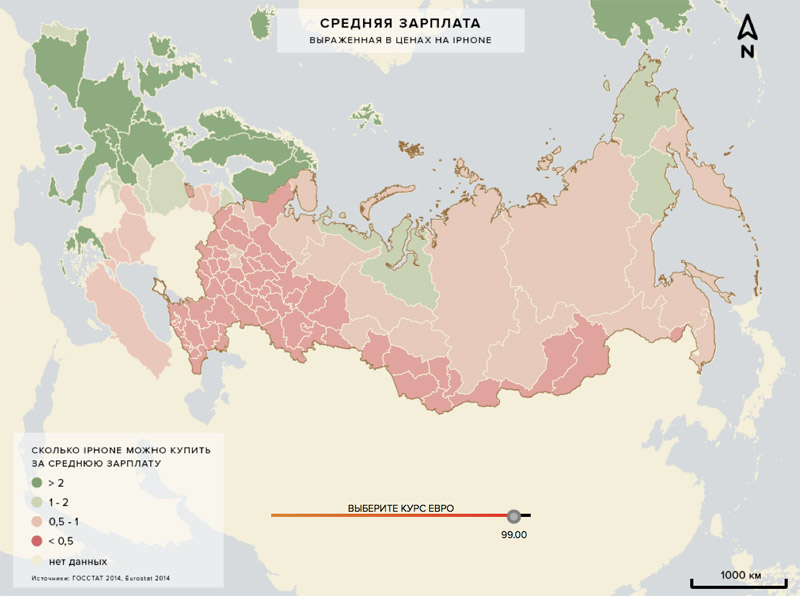 “Map of the purchasing power of Russians expressed in the possibility of buying the iPhone, like “big Mac index”. The trends reflected on the map that can safely be used in the analysis of the distribution of foreign companies and the global economy. But with a large error, since the average salary is the average temperature in the hospital. For example, have registered one billionaire in regional tax territory, immediately and salary will rise sharply. In Russia and sverhbogatyh, and poverty”, – said the expert club “Ural-Eurasia”.

For people who are into iphoneography, standard lenses iPhone, of course, is not enough. You have to resort to third-party solutions with more advanced functionality. Apps from the Ap Store, you can not only make better photos, but also processing the final images. In the App Store released an update of one of the most […]