Samsung has suspended deliveries presented in early August a flagship smartphone Galaxy Note 7 due to a problem with the battery, causing ignition of the device. The story of the exploding batteries Korean tubes gave rise to many jokes on the subject. One of them captured on video for the news. 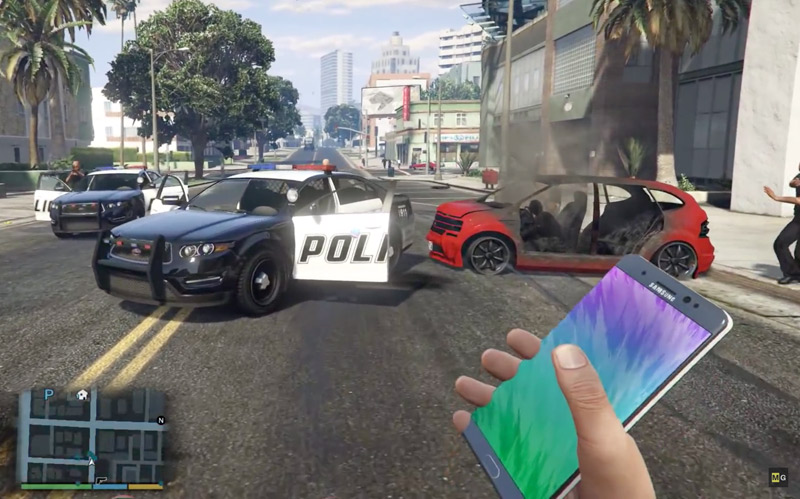 Samsung replaced the faulty copies, started the delivery of safe versions of Galaxy Note 7, and the overall situation began to slowly improve. Despite this, the smartphone is likely to go down in history thanks to its characteristics and shortcomings, as was the case with Windows Vista, Apple Maps and others.

Video on YouTube shows the use of the hazardous “nature” of Samsung in the game GTA V, which is very popular during all three years since its appearance on the market.

The video begins with a visit to the gun store where the Galaxy Note 7 is available to purchase as a bomb, and then the hero goes outside, starts to destroy his car and later the police arrived. The smartphone can not only throw, but also to glue on almost any surface.

Of course, perhaps the manufacturer will laugh at this joke, because such a failure in the worst case scenario could even lead to serious injury. However, the known incidents ended very well with minor injuries to users.

According to rumors, the next iPhone will be painted in a deep, almost black color is Space Black and not dark blue as was suggested earlier. The new color scheme will replace the now classic space grey (Space Grey) and will be closer to the shade of “smart” watches Apple Watch. Known in Apple circles […]

31 March, started selling the new 4-inch smartphone iPhone SE that was presented a week earlier at the spring launch of Apple. The novelty has attracted interest from buyers: in most major American electronics stores, the first batch of smartphones that are not bound by contract to the operator, has successfully sold out. According to […]