Designers from project DBS Videography has posted on YouTube a video of the concept of the new smartphone Apple — this author see iPhone quite near future. “We decided to create our own fan art, reflecting the prospects of development of the iPhone,” wrote the artists. In addition to appearance, they described some technical features of “iPhone dreams”. 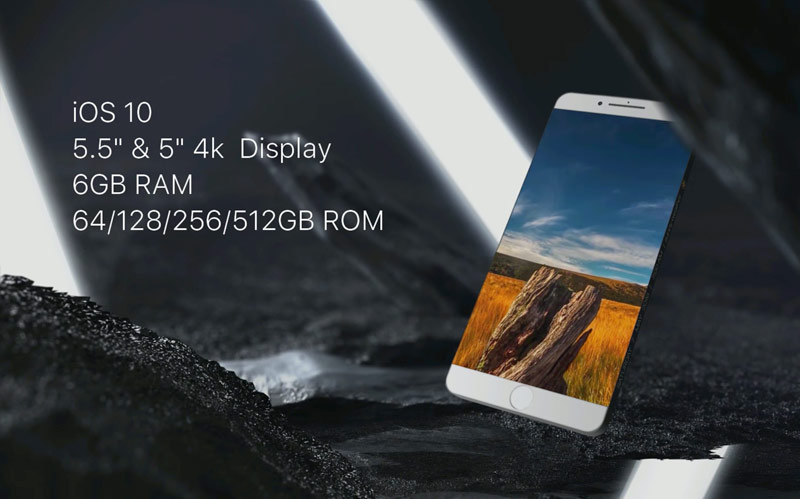 Externally, the device retains the features of the existing iPhone. But the authors of the concept propose to use the smartphone 5.5-inch sapphire crystal display with a resolution of 4K. According to their idea, the next generation iPhone will be wrapped with screen. In addition to the front panel display iPhone 7 surrounds the sides of the device housing, allowing you to place them on the texts of the received messages, icons, games and apps.

This design allows you to withdraw on the side faces of the iPhone and some other functions. For example, there may be displayed alert about events (receiving messages, emails, etc.), buttons, audio control, multimedia and navigation keys for the various screen menus, etc.

Also, the designer has equipped the iPhone 24-megapixel main camera with lens f/1.7 and with support for 4K video recording 16-megapixel front camera, 6 GB RAM, battery capacity of 5000 mAh. The device is offered in four versions with different capacities – 64, 128, 256 and 512 GB and are running under iOS operating system 10.

iPhone 7: a boring update for some, the most anticipated gadget of the year for other

Before the announcement of the next iPhone is less than a month and the Internet is full of all sorts of leaks about the upcoming new Apple. Anonymous sources have found out almost everything about the iPhone 7: design, features, modifications, and even the prices. However, due to similar design with the current flagship of […]

Published CAD drawings of the iPhone 7 and 7 Plus: protruding camera, Smart Connector, no 3.5 mm audio Jack

In September, Apple introduced the new iPhone 7 and iPhone 7 Plus and today the Network appeared the pictures with the CAD drawings of new products, which, according to a source, were obtained from the Taiwan Catcher Technology contractor. The pictures posted on Twitter by the famous author of the leaks OnLeaks. Schematic image of […]