It is believed that Apple computers are much better than their Windows counterparts. In many aspects it really is, so many users want to change my Windows PC to the Mac. Go with a Microsoft operating system on macOS is not so difficult, but you need to keep in mind several points. These tips are intended for beginners in the world of Apple and for users who previously used Windows only. 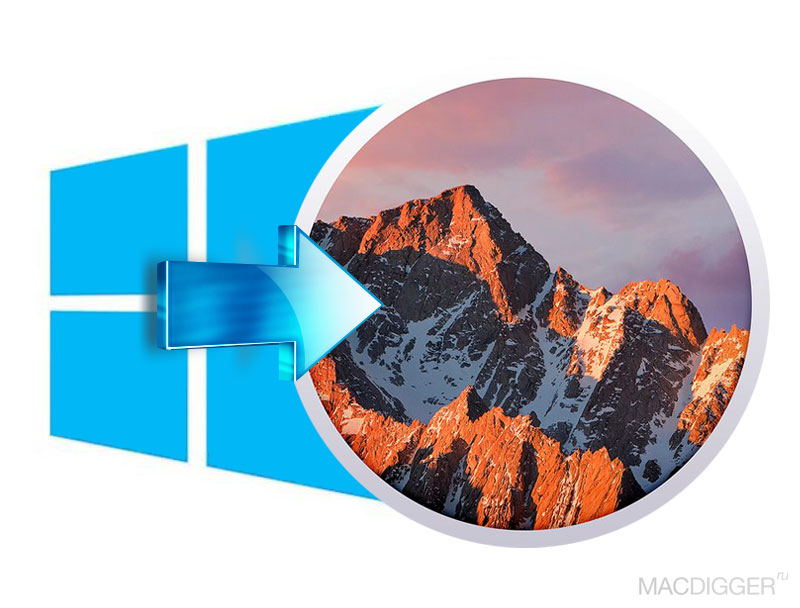 From desktop Windows and macOS there are a number of differences. On Apple devices it is often cleaner, so when you first set up will have to spend more time to do whatever you like. Keep in mind that on your Mac desktop there is no option to “Upgrade”. 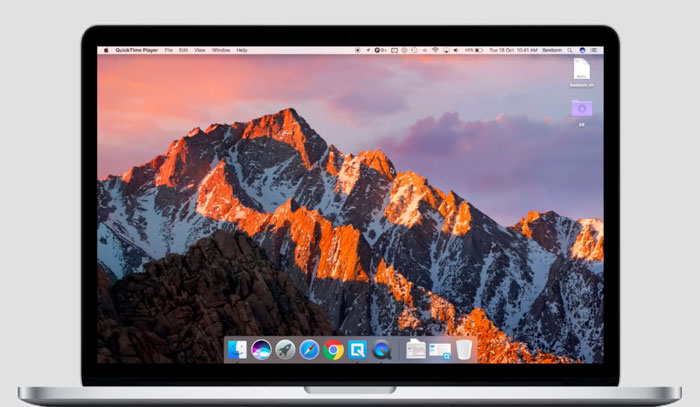 Finder is the equivalent of Explorer on macOS, but actually it is much more functional. In Windows you can access the guide by clicking on the appropriate icon or key combination Win+E on a Mac, Finder is always open by default, you can not even close. 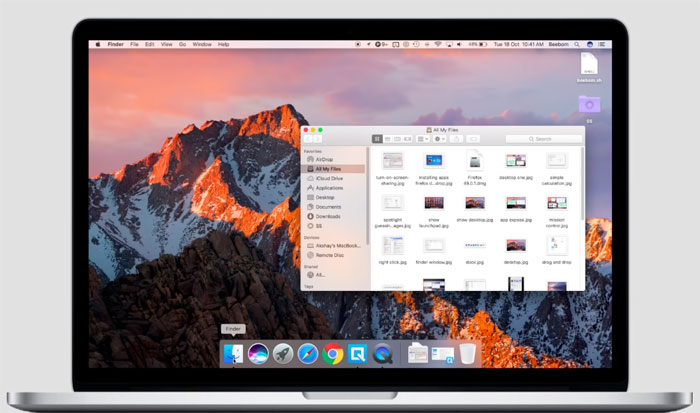 To create a new folder in Windows you can Ctrl + Shift + N on the Mac, however, for the same action responds to Cmd + Shift + N. If you prefer to use a mouse, then in Windows you have to press RMB, “Create” and select “Folder” on a Mac you need to make a right click and choose “New folder”. 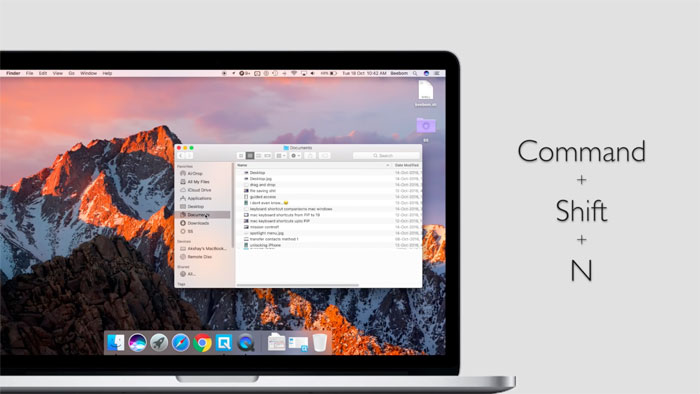 In order to rename a file in the system from Microsoft, you should click the right mouse button and select the appropriate item in the context menu or select the file and press F2. On Mac you can also choose to rename the file using the pop-up menu or select the document and press the keyboard Enter. Please note that on Windows, the file is opened by pressing Enter, on a Mac this function is responsible combination Command + O or Command + arrow down.

Finder supports tabs, which you have to press Command + T. 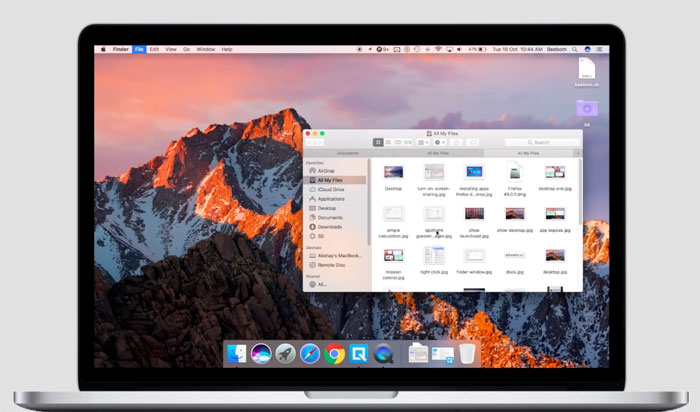 In addition, Mac other organization of the file system. Windows users used to see the disk partitions (C, D, E), however on Apple devices you will not see this, since all data is stored on one partition. 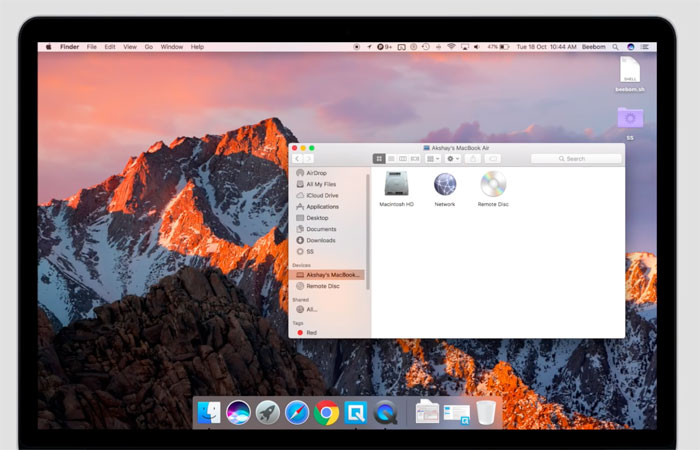 If you connect an external USB device, the Mac for their safe extraction is necessary in the file Manager click “Extract”.

In order to get into the properties of a file or folder in Windows, you click the right mouse button and choose “Properties”. On Mac you also need to right click and go to “Properties” or select the file and press Command + I. 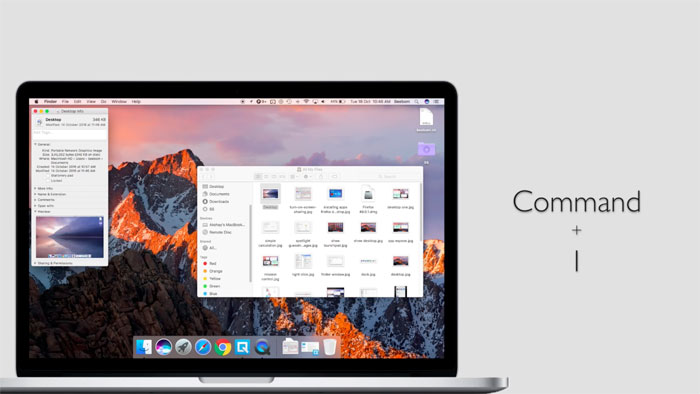 For copying in Windows is Ctrl + C, but on Mac it’s Command + C, just to paste is Ctrl + V and Command + V respectively.

In order to cut and paste file to Microsoft you need to press Ctrl + X and then Ctrl + V on macOS it’s more complicated than Command + C to copy and Command + Option + V to move. 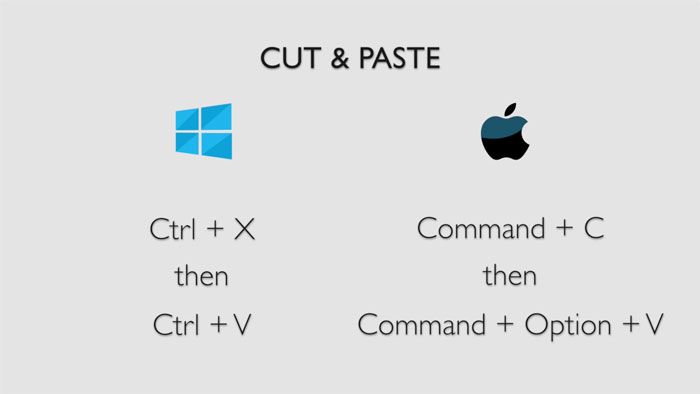 Ctrl + A in Windows is responsible for the allocation of all the files the same operation on a Mac is performed by a combination of Command + A. a Useful feature on devices running Windows is highlight the files and press Delete to move to trash or Shift + Delete for permanent deletion. If you want to do the same on the Mac, you press Command + Delete to move to trash or Command + Option + Delete for deletion without the possibility of recovery.

Speaking of the Delete button, it should be noted that its functionality on the Mac is somewhat different, as it works as a normal Backspace. To remove follow-up text is fn+ Delete.

Alt + Tab on a Windows PC moves users through your open applications on the Mac use Command + Tab. To close the application you have to press Alt + F4 and Command + Q, respectively. 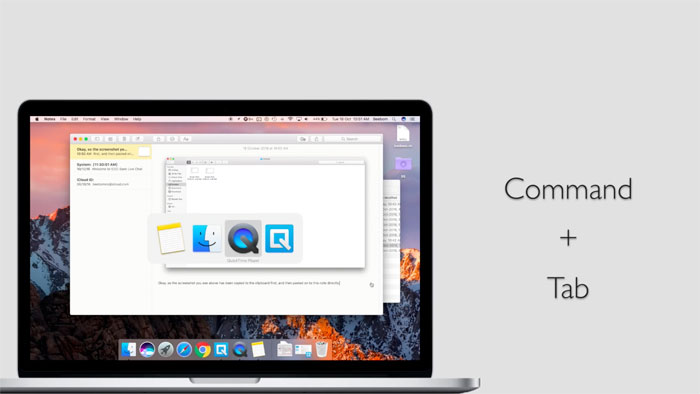 At first glance it seems that the trackpad on the MacBook does not differ from that on a Windows PC. In fact, it supports a huge number of gestures. 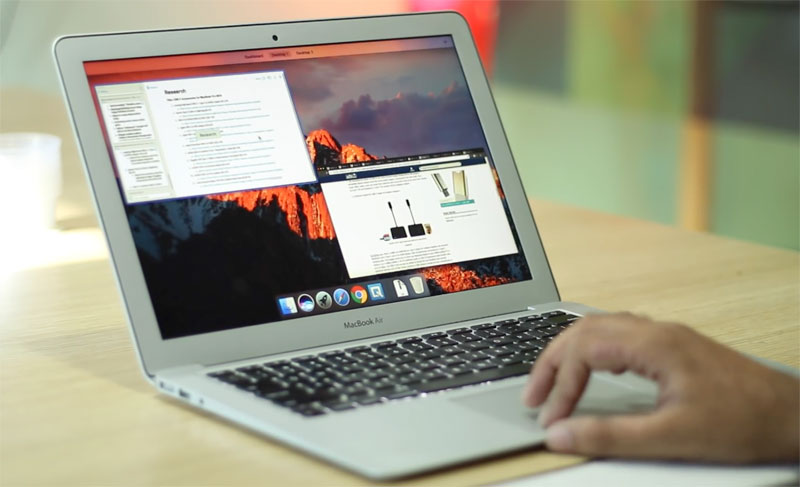 On Windows computers the functionality of the trackpad often is limited to the scrolling and scaling, but on the Mac these functions much more. Swipe three fingers up opens Mission Control, where you can see all the running apps. If you have multiple tabs open, swipe down with three fingers will open a similar menu, but instead of running apps will be displayed in the active tab. It often happens that while working with the application need fast access to working little bit to, for example, to move the file. In this case, it is possible to make a gesture with three fingers. To access the Launchpad, you need four fingers to perform a gesture, reduce the scaling.

Spotlight is a lot like the search system in Windows. To invoke the search in Windows use the key combination Win + S on the Mac the search is opened with Command + Space bar or icons in the menu bar. 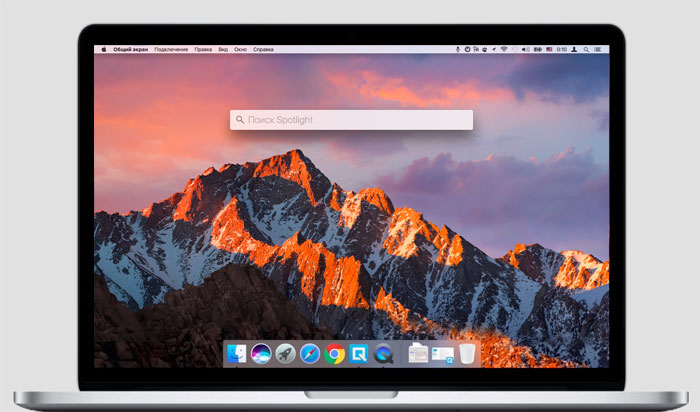 Like Windows, Spotlight on macOS allows you to find the meaning of words, to search the Internet, run applications and to perform simple calculations.

Because of the Spotlight, many forget all about the Launchpad, as the search works very fast and saves a lot of time.

Clicking the red x in the app on the Mac, you are out of it. In order to close the program, you need to use a combination of Command + Q or click on the title in the menu bar and choose “Exit”. You can also click the right mouse button on the app in the dock and select “Exit”. 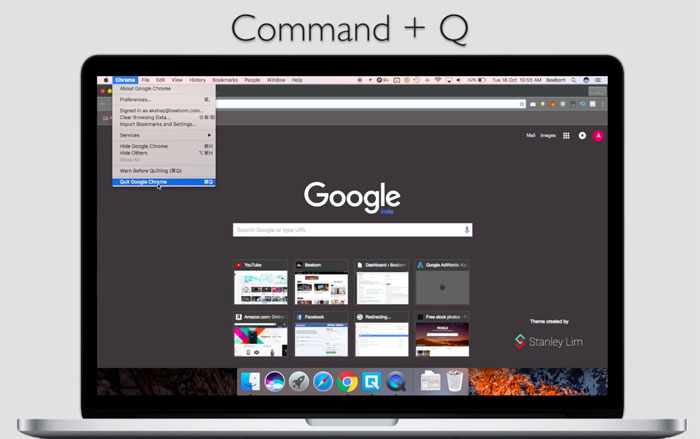 As mentioned earlier, to switch to multitasking can be using the trackpad gestures. macOS supports multiple desktops in Windows this feature only appeared with the release of “tens”. 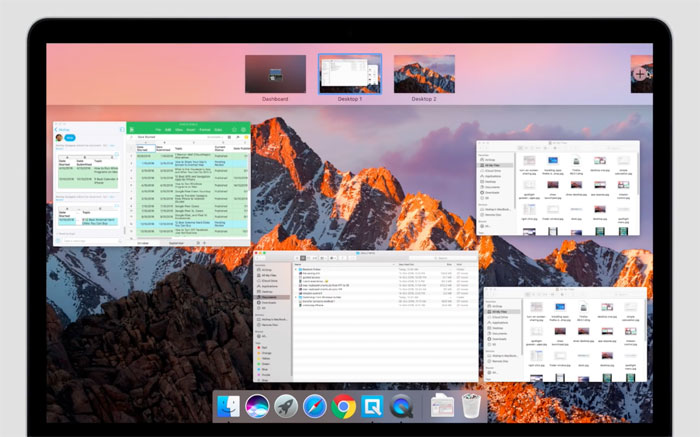 If you want to use multiple desktops in Windows, click the Task View in the task pane, and the bottom will preview existing desktops. In macOS, you need to go to Mission Control, and certainly also will be previews of the desktops, but at the top of the display. Microsoft suggests users to use shortcuts. For example, to create a new table you can just press Win + Ctrl + B to switch between them — Win + Ctrl + arrow left or right to close — Win + Ctrl + F.

Mac, unfortunately, does not support hot-keys in this case, but you can use a triple swipe to the left or right to switch between desktops. Remove programs on a Mac looks just like to install – navigate to the applications folder in Finder and press Command + Delete, then the system will prompt you to enter a username and password.

Both systems support the display of two apps on one screen, but Windows a was superior to macOS. You can open 4 applications and work with them simultaneously. By default, Apple computers are nothing like that, so you’ll have to use third party software such as Better Touch Tool or Better Snap Tool. 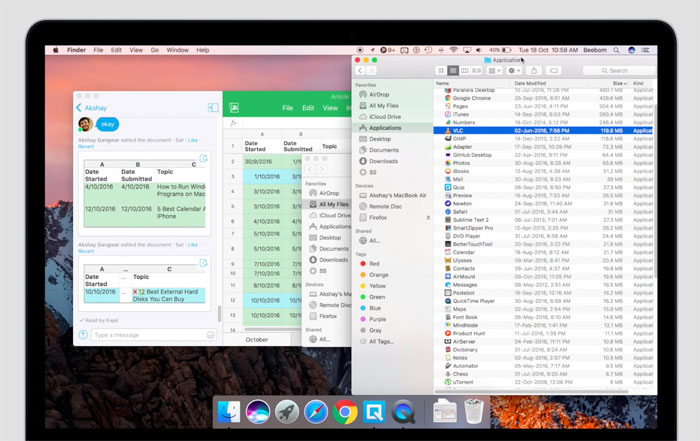 In Windows 10, Microsoft introduced its own voice assistant – Cortana. Apple followed the example and ported Siri on the Mac in macOS Sierra. On the background of Cortana, Siri looks more functional because, in addition to the basic tasks, she is also able to display information about the computer and change settings.

The only problem is that the Apple assistant is not able to work with writing teams at a time, as Cortana can process both voice commands and text.

If you used Windows, most likely, the file system all your external drives – NTFS, but the Mac does not support writing to NTFS devices. The problem is solved by formatting the external drive to a compatible format FAT32 or exFAT, or install a third-party driver such as Paragon NTFS for Mac.

Data backup never hurts and should be done on a regular basis. As macOS and Windows offer quick ways of backups. All you need is an external hard drive. Creating a backup and restore on Mac is very easy – plug in an external device, go to settings and select Time Machine. If you need to recover data, connect the hard drive, click on the Time Machine icon in the menu bar and select “Enter Time Machine”. You can then choose which files you want to restore. 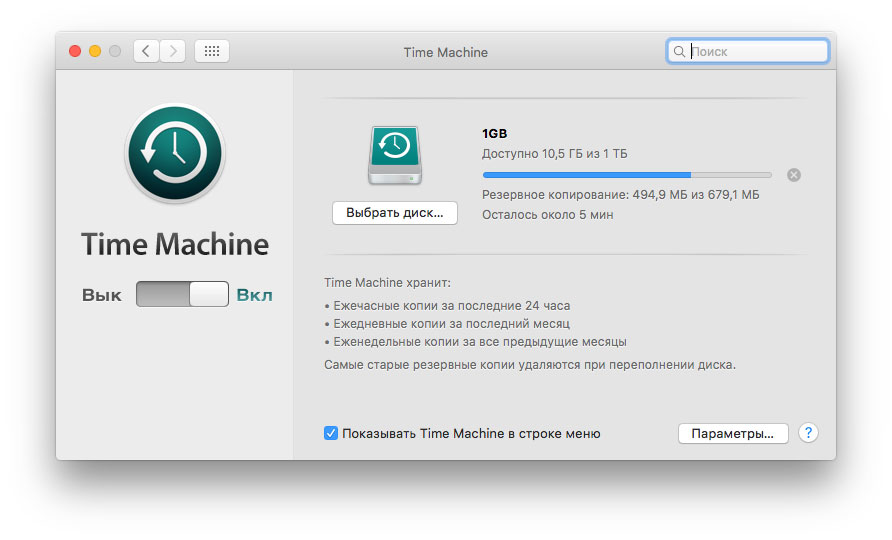 On macOS, you very rarely will meet with the error “App not responding”, but if this happens, press Command + Option + Esc will open the analogue of task Manager in Windows and close the unresponsive application.

The iPhone 7 and iPhone 7 Plus

In the new operating system iOS 10 messenger Apple gets a radical upgrade. When the company talked about a new way of communicating with iMessage, it meant exactly that. Everything will be so fluid and customizable, as I could imagine. Now iMessage supports animated characters, such as balloons, confetti and fireworks that can be displayed […]

As reported by Phonearena, next week in some European countries will start selling the new smartphones Apple company iPhone 6 (2017). As you know, in Cupertino have decided to return to the market iPhone 6, which was withdrawn from sale in 2016 after the launch of iPhone 7 and iPhone 7 Plus. Moreover, the model […]