Modern technologies allow to fit the gadgets into a shell the size of a matchbox, however, a serious obstacle to further miniaturization is the screen and body materials. Researchers from Human Media Lab at Queen’s University in Kingston demonstrated a prototype flexible smartphone that is controlled by bending the screen or standard screen input. In the video, the developers bend apparatus for turning pages of an electronic book and playing Angry Birds. 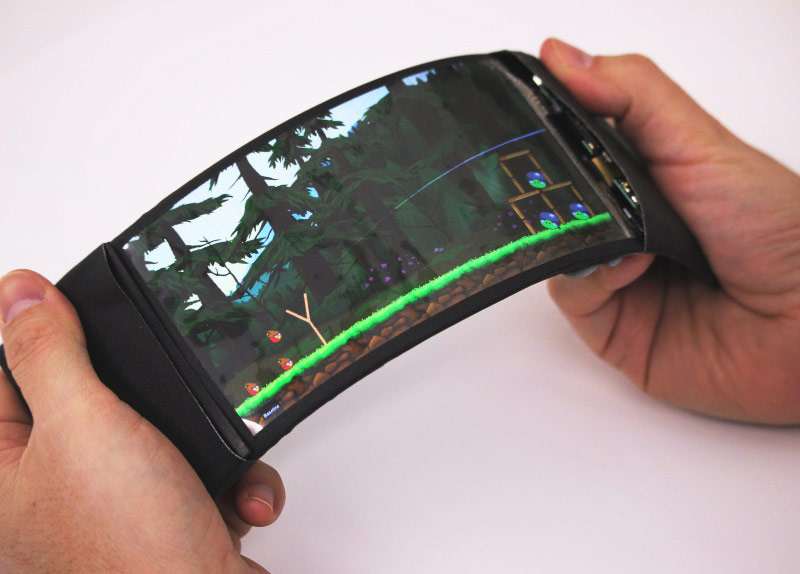 A device called ReFlex runs on the operating system Android 4.4 and is equipped with a flexible OLED-screen diagonal of 6 inches. Behind the screen there are sensors that determine the force of bending smartphone. The display is impossible to bend the phone, but engineers don’t pursue such a goal.

The sensors respond to bending of the screen that allows you to interact in a way with the software interface. The developers believe that the mass production of such gadgets will begin within five years.

Manufacturing technology of smartphones requires a flexible rubber body, flexible display, as well as a completely new type of batteries, circuit boards and other internal components, which can withstand without damage the mechanical stresses arising from deformation.

At the beginning of last year, the Bureau of patents and trademark office gave Apple a patent for a flexible electronic device using built-in sensors that allows to control the user interface and multimedia content by the method of bending and twisting of the gadget.

About when on the market can receive the iPhone, made by the new “flexible” technology, Apple does not specify. In 2014, the California giant has opened a vacancy for the position of lead engineer on displays, with experience in the field of advanced technology, AMOLED and flexible screens. Job description reflects an interest of the company in the creation of mobile devices with displays that can change its shape without damage to health.

Can we expect the next generation of Apple TV?

It’s been three years since the last Apple TV update. And Apple, we spent another major event, not say a word about the fate of their set top boxes. Device for playing streaming video from Apple lasted for three years without updating, while Internet TV grew up and became more accessible. In this period of […]

A fan showed live the device from the book Apple for 20,000 rubles [video]

Quite a mixed reaction from the audience caused the book Designed by Apple in California about the history of the design of Apple products. Not everyone is ready to pay 20 000 equivalent, while the limited edition will be cost much more expensive. An Apple fan from the project 512 Pixels decided to make a […]

Unsupported iOS apps pose a serious threat to the security of the data, found an expert in the field of information security Chris Vickery. He found the open access user database is out of date Kinotopic. Currently Kinotopic is no longer supported, however, the official site of the project is still running. According to READ  […]