Analyst at Pacific Crest Andy Hargreaves analyzed the users ‘ interest in the Apple Watch and came to interesting conclusions. It turns out that the electronic bracelet is still inferior to the popularity of iPods.

The expert analysed the queries of Internet users Google. It turned out that after increased interest in March and the start of sales of Apple Watch in April of this year stir awake. And at the moment, smart watch Apple searching the Internet less frequently than the iPod. I must say that sales last fall the last few years, as the company have not updated the device. After the worldwide developers conference, Apple and even iPod partition was removed from the main menu of the website.

The release of the second generation of the Apple Watch, according to reports, scheduled for 2016. Despite the fact that the first “version” of the device remains in deficit, the company will adhere to an annual update cycle, as in the case of iPhones and iPads. 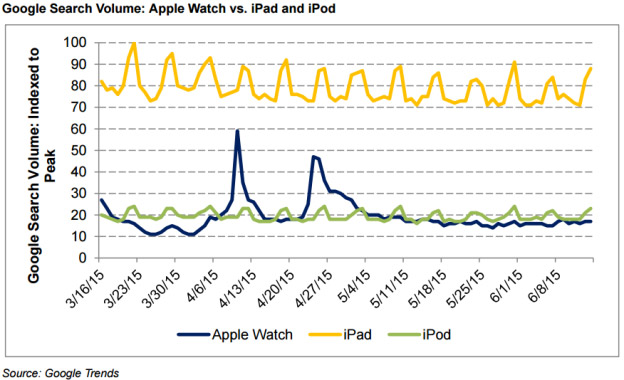 Pre-orders for the Apple Watch, which opened in April. Apple managed to sell all the new items in less than six hours. The “luxury” model of the device, the Apple Watch Edition cost of 10 000 dollars, is completely sold out in just a few minutes.

Tim cook answered some questions in an interview with the senior

Apple CEO Tim cook recently talked with a high school student Rebecca Kahn in the framework of the Innovator to Innovator. It provides community members with NCWIT Aspirations in Computing (AiC) the opportunity to ask questions to Apple executives. Reported by Apple Insider. In the first part of Innovator to Innovator a short interview with […]

Apple brought back the classic icon from the Macintosh system. The icon, which first appeared in the 80-ies, now used for Face ID. The presentation of the new iPhone, Apple introduced facial recognition system, which will now be used to unlock the iPhone X no Home button. In the schematic Face ID is easy to […]

“People are waiting for the new iPhone 7, and Apple will show one more “six”

In the first quarter of 2016 Apple recorded the first ever decline in iPhone sales that affected the company’s stock. Of course, the flagship of the 2015 iPhone 6s cannot be called a failure. But the most successful model it can not be called. Despite a number of improvements over its predecessor, including 3D display […]