The Apple has issued the first update to the test version of Safari Technology Preview, released in late March. The release includes a long list of changes aimed at improving support for JavaScript, CSS, and update the API web interface and improved web inspector. 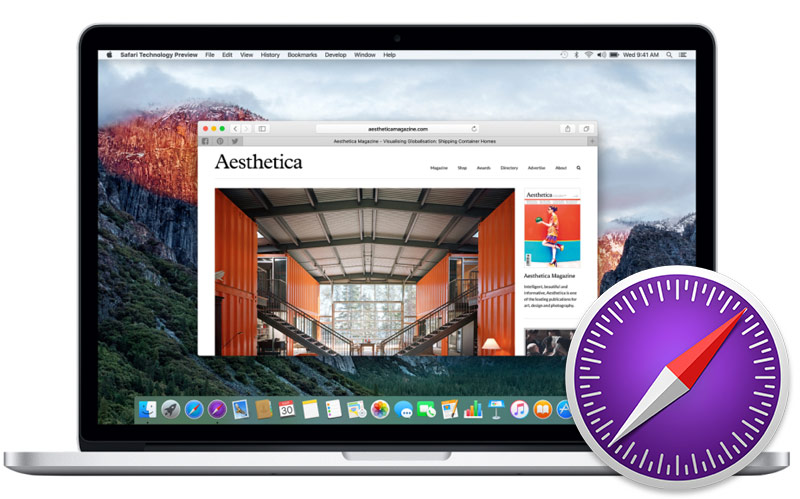 Wishing thrills and innovation that are not available in stable versions of Safari, now it is not necessary to put the beta version of OS X. Safari Technology Preview is installed into the operating system regardless of the already loaded version of the browser and is addressed to those users who would earlier other to gain access to the latest features and are willing to put up with a certain number of errors and malfunctions.

Safari Technology Preview provides tools for creating web applications and the latest features “to break.” You can start it simultaneously with the regular version of Safari that simplifies development and testing. The Technology Preview icon Safari purple and not blue like the stable version.

All local data Safari Technology Preview is stored separately, including history, bookmarks, cookies and cache. Bookmarks and history can be synchronized via iCloud. In the developer version of the browser the Develop menu enabled by default.

The first update for Safari Technology Preview became available through the Mac App Store. Apple is planning to release new versions of a browser more often than the version for ordinary users.

Original download Safari Technology Preview available on the website of Apple developer. The company warns that this version of the browser for developers and testers, so its work may fail.

The photo was lit iPhone 7 in color Space Gray

The release of the flagship smartphone the iPhone 7 is expected in September. The closer to the premiere, the hotter the rumors about the new product. Today, the network got photos of the 4.7-inch version of the device color Space Gray. The images were published in Chinese social network Weibo. In the photos you can […]

As ZDNet reports, on Saturday, September 30, the court issued a final decision in the case of the iPhone shooter from San Bernardino to allow the FBI to disclose details related to the creation of software to unlock the phone. In the past year, the FBI turned to Apple with a request to unblock the […]

iPhone 6s exploded in the pants pocket of the owner

It seems that long-suffering Galaxy Note 7 is not the only explosive gadget on the market. And literally at the end of last month, sources reported about the incident with the iPhone 7, which burned down before was in the hands of its owner. And now the incident occurred with last year’s flagship Apple. A […]