Over the past year, the share of Apple in the smartphone market in the pieces fell from 10.3% to 5.2%, according to “Vedomosti” with reference to the GfK study. We are talking about the report for the period from April 2014 to April 2015. The company’s share of revenues in the same segment also fell from 26.3% to 21%. 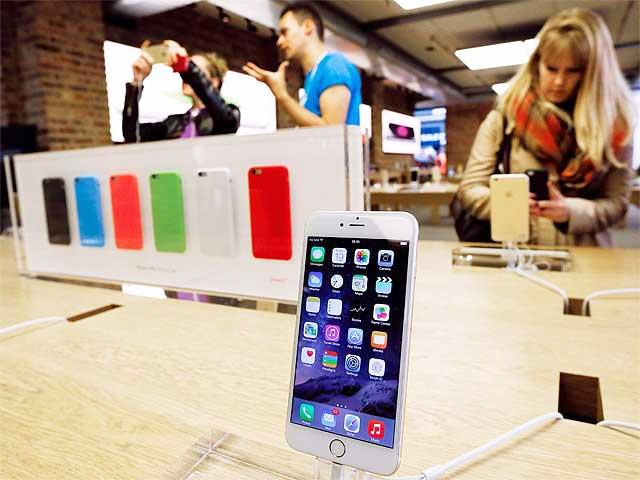 The share of Samsung smartphones, according to GfK, during this period also decreased from 19.3 to 17.9%. But the position of the Korean vendor in the revenue, on the contrary, strengthened from 23.6 to 27%. China’s Lenovo was one of the few companies that have been able to strengthen its position in smartphone sales in units. While its share has increased significantly: in April 2015 on its smartphones in Russia accounted for 7.7%, and the year before only 3.7%. Rose and the share of Lenovo’s revenue from 3.5 to 6.9%.

Apple is losing ground in pieces because of the price, I’m sure the representative of “Coherent” Maria Zaikina. The last generation was initially a bit more expensive than the line iPhone 5s and iPhone 5c, the same effect is the increase of prices in late 2014, she adds. In the past year, Apple has twice raised prices on its products in Russia: at the end of November 2014 and a month later. The first time the iPhone 6 and iPhone 6 Plus went up by 20%. After the second price increase on the iPhone 6 and iPhone 6 Plus have increased by 35%. The American manufacturer managed to keep a share in the proceeds at the expense of the cost of the devices to the iPhone 6.

The peak of the popularity of the iPhone in Russia came in November 2014, then their share in PCs was 15.1%, according to the GfK study. The share of Samsung smartphones in the Russian market was the biggest in December for 25.1%. Apple started selling its iPhone 6 in Russia in September, by November there was a high level of supply in the country and sales have peaked. In December, Apple has increased the prices of their smartphones, as Samsung did not, so the Koreans this month was this increase in sales.

Read also:   How to do sports in the 21st century

It is possible that Apple will change soon: in April 2015, the company has twice lowered the prices of its products in Russia – first for smartphones and then for laptops and tablets. So, the latest Apple smartphones fell by 9-10%. Now in the Apple Storе iPhone 6 and 6 Plus with a storage capacity of 16 GB are 48 990 990 rubles and 55 respectively. Galaxy S6 with a storage capacity of 32 GB worth of 46 990 rubles, and Samsung Galaxy S6 edge 54 990 rubles. 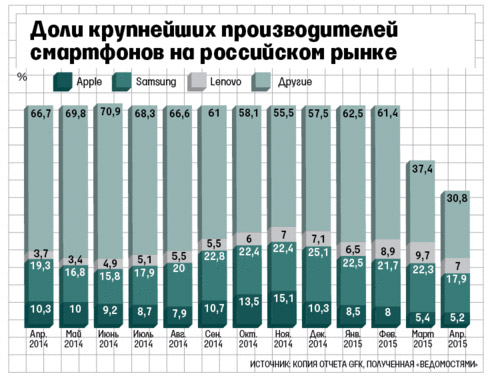 As for Samsung, the leader in pieces the company provides a broad model lineup, as well as sales leaders: in April, she presented its new Galaxy S6 and S6 Plus, Zaikin notes. And the success of Lenovo is due to thought-out pricing policy and a wide range of devices, not only in budget, but in higher price segments, she said.

Other data results MTS: according to the operator’s retail network, the maximum increase of unit sales in 2014 fell on smartphones Samsung, Apple, Alcatel and Sony, and the highest revenue growth – on devices Samsung, Apple and Sony, says a company representative Dmitry Solodovnikov. However, he noted that in the monobrand operator sellers do not focus on smartphones Lenovо, so sales are insignificant.

Lenovo really see the growth of sales in the Russian smartphone market for the period – both in units and revenue, said company spokesman Marat Rachev, he agrees with the data from the GfK report. A person close to Samsung said that the decline in the share of the company in pieces due to the emergence of new Chinese vendors in the Russian market, taking share from A-brands. And share growth in revenue is due to the fact that the company from 2014 to focus on premium smartphones.

New iPad Pro will get cameras like the iPhone 11 Pro

One of the features of the new generation iPad Pro will be a triple main camera, like the iPhone 11 Pro. This was announced by a well-known insider Benjamin Geskin, who published in confirmation of his words a photo of the first cover for a new apple tablet. interesting                            Users have named […]

Screenwriter of the film “Steve jobs” apologized to Tim cook, who was named a hypocrite

Aaron Sorkin, screenwriter biopic “Steve jobs”, apologized to the head of Apple Tim cook, calling him hypocritical. Comment Sorkin voiced in an interview with E! News. “You know, I think that Tim cook and I have gone too far,’ said the writer. And I apologize to Tim cook. Hope he will get acquainted with the […]

Maybe sooner or later Samsung will be able to explain to consumers why they need big and heavy Android tablet with fixed stand. Meantime the device called the Galaxy View, representing either a giant tablet, or Smart TV compact, appears to be another attempt to prove a controversial thesis that “size matters”. Samsung Galaxy View […]