As part of the campaign ‘Shot on iPhone 6″ Apple posted four new video designed to highlight the shooting features of the flagship smartphone of the company. 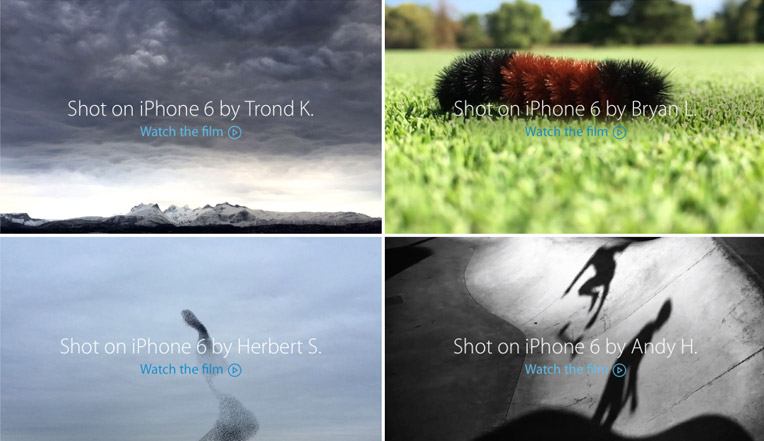 The earlier section on the Apple website dedicated to smartphones, included only a few videos, but the main focus was on the photos. Now the company has launched a new gallery clips shot around the world. Four new 15-second clip is also available on YouTube.

The video demonstrates the various possibilities of photography with the iPhone 6, including modes of slo-mo and timelapse. All of the clips shows a short episode duration 15 seconds, difficult to capture on video (for example, flying birds). After it is signed Shot on iPhone 6 (‘Shot on iPhone 6″).

Now on the Apple website is available in 11 videos and about 50 photos. It is emphasized that all simple video shot by ordinary people, not professionals, although the quality of individual records is impressive. Also if in the case of photographs, it was stated, what software was used for editing and processing, such information is not provided.

For the first time Apple launched the gallery ‘Shot on iPhone 6″ in March, putting on public display the works of several tens of users from around the world. In the future, these images have been used for print and outdoor advertising. The quality of the videos in the new gallery appropriate is recommended.

The iPhone has already received intended for use in vehicles optimized interfaces Apple CarPlay. However, a California resident by the name of Giulio Sege believes that the distraction of drivers in the process of using iPhone is still one of the main causes of road accidents. The Sege went to court with a claim to […]

The market is ready for e-SIM cards Apple

As you know, Apple is in talks with mobile operators to launch e-SIM cards (e-sim). Experts are of the opinion that the market is ready for the transition to embedded in smartphones e “Simcoe”. GSMA Association, which unites mobile operators around the world, may soon conclude with the smartphone manufacturers agreement to use standardized embedded […]

Samsung Galaxy S9 and S9+ can get advanced system of biometric identification of the user’s face and the retina of the eye. According to reports ETNews, the Corporation intends to improve the functionality programmatically. The source reports that both smartphones will be equipped with a front camera of 8 MP, the same as in the […]