Cadillac has announced the expansion capabilities on-Board systems in cars 2016 model year, adding support for Apple’s CarPlay. The production will begin this summer. 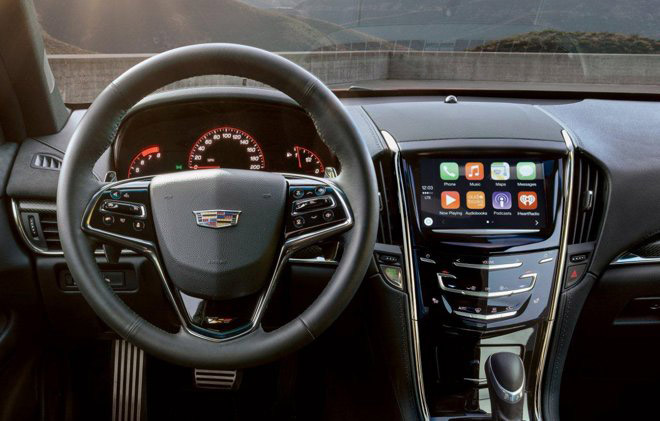 CarPlay will be available in all Cadillac’s 2016 model year that are equipped with multimedia complexes CUE with 8-inch touchscreen that supports multitouch. The exception will be SRX premium SUV, the new generation of which will appear in early 2016. Android Auto will start to integrate a little later.

“Cadillac is constantly improving their cars, extending the capabilities of onboard systems and embedded technology,” said chief engineer David Leone. – In 2015, the Cadillac became the first brand of premium, which provided customers with access to technology wireless charging and 4G LTE Wi-Fi. In 2016 we plan to have a much better integration with smartphones and increase overall system performance”.

According to manufacturer, Cadillac CUE provides easy and intuitive access Apple CarPlay. On the screen appears “Projection” (Projection), allowing you to quickly go to the basic iPhone functions, including navigation, contacts, speakerphone, text messages and some apps supported by Apple.

Apple CarPlay provides access to the required functionality directly on the iPhone screen infotainment system of the car. The driver can make calls, receive and send text messages and listen to music using the touch screen or voice assistant Siri. Apple CarPlay supports the functions of the smartphone, as Phone, Messages, Maps and Music, as well as compatible third-party apps. Full list of supported applications: Apple.com/ios/carplay.

Many functions can be controlled using voice commands by pressing a special button on the steering wheel that helps the driver not to be distracted from the road. In addition, the cars of the 2015 model year Cadillac introduced the technology of wireless charging, and provide support 4G LTE Wi-Fi in its decision OnStar.

To use any of the available systems integration, the smartphone must be connected via the USB port. To work with Apple CarPlay requires iOS 7.1 or newer version of this operating system (either iPhone 5 or later models).

In models Escalade, CTS and XTS the capabilities of the system, Cadillac CUE will complement the Surround Vision, allowing me to check the situation around the vehicle. And the information about the mode of movement will be duplicated on the screen.

Users around the world anxiously await the release of the new generation of iPad Air. Previously it was assumed that the upcoming 9.7-inch model will be called iPad Air 3. However, later denied, the novelty will relate to the range of iPad Pro, not iPad Air. However, some sources continue to assert that it will […]

Samsung has made no secret of the upcoming debut of the high-end smartphone Galaxy Note 8, intended to compete with the main flagship of the year. First, the official Twitter account appeared a render of the upcoming device, and now the President of mobile division of the company Gao Dongzhen officially announced that “killer” iPhone […]

Apple until the end of the current quarter will update the iMac line, according to a leading analyst of KGI Ming-Chi Kuo. The upgrade will only affect hardware monoblock machine – CPU, display, graphics, etc. Analysts do not specify which model iMac is waiting for the update, but earlier in the code beta version of […]