After a month of testing and five test assemblies, Apple released final version iOS 10.1. Most anticipated this update was for the iPhone 7 Plus, as this OS completely disclosed the potential of dual camera flagship. 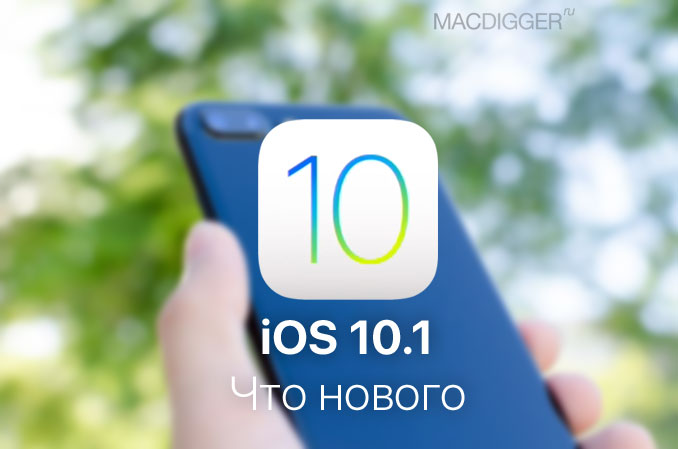 A new mode available for the camera iPhone 7 Plus and allows you to take photos with the background blurred, as in SLR cameras. Unfortunately, after five beta versions of iOS feature in 10.1 and has remained in beta stage. Smartphone users should consider this fact when using the mode. Because background blur occurs through a complex software algorithm, sometimes this happens with errors.

It is hoped that over time Apple will improve the feature. The company says that more photos will be processed using portrait mode, the smarter it will become.

In addition to the new photo mode iOS 10.1 brought a number of improvements and bug fixes related to camera integration with Bluetooth devices, including Apple watch, added support for public transport routes to Japanese cities Tokyo, Osaka and Nagoya.

In 10.1 iOS developers got access to the data of the barometer in iPad Air 2, iPad mini 4, iPad Pro and improved display photos with a wide color gamut mode. In addition, the iPhone 7 and iPhone 7 Plus apps now fold without any delays. There were realized nearly four dozen amendments.

All owners of iPhone, iPad and iPod touch will receive a notification about the availability of iOS 10.1 automatically in the near future. In order to install the update manually, go to “Settings — General — software Update”.

Sony started selling digital car stereo XAV-AX100, specifically designed to work with automotive technology Apple CarPlay and Android Auto. The device, announced in August this year, provides a convenient way to use the most popular driving features of Apple’s smartphone: calls, navigation, music, messages and more. The beginning of sales of Sony XAV-AX100 was scheduled […]

5 prohibited, in conversation with a fan of Apple

How not to make small talk about the new iPhone after September 12. “How much?! Yes for such money it is better to buy Xiaomi”. Guilty without trial: Apple pulls back the price tags to the roof of the newly built space plates. How not to kick the owner of the iPhone for a stupid […]