Commercial for chain stores iPhone+, Apple sells appliances in Georgia, caused outrage among users on the Internet. Video telling about the high quality of Apple gadgets, was created in the style of the appeals of terrorists. 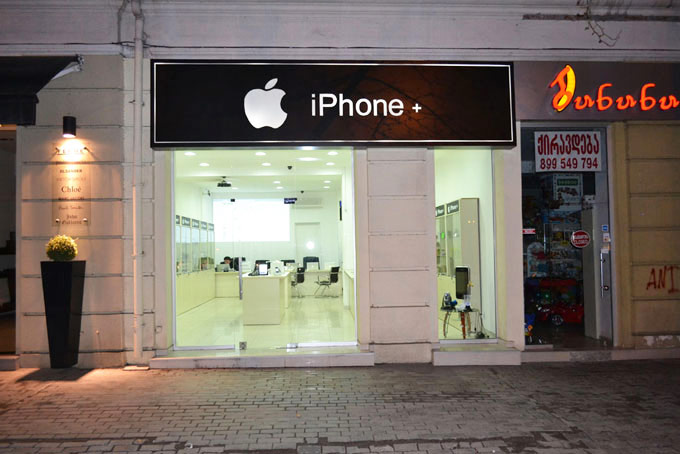 Video iPhone+ like video messages, periodically distributed by the terrorists. On video before a shop window with the iPhone are the people in masks and with weapons in their hands. Can hear the Arabic language, accompanied by Georgian subtitles, in which we are talking about high quality and low prices. In the end they “threaten” their competitors strong competition and shouting “Allah Akbar”.

In an interview with “news-Georgia” Western Georgia mufti Beglar, Kamashidze stated that the video could cause irritation to the radical groups. “In my opinion, these ads will cause greater resentment among radical groups, which in the future will bring even more problems to the state and the country. You cannot use religion as the advertising,” he said.

The mufti explained that in the video the background is used a preaching mentor in Arabic.
“I listened to the video. It is not they (the participants of the video) say. The background used the preaching mentor. There they say “Allah Akbar”. This cynicism. They either mock the Islamic religion or adopt the hatred of Islam in society,” said Kamashidze.
Religion should not be used for their own purposes, for their business, said the mufti.

Chain stores iPhone+ was founded in 2009. In Georgia operates five stores: three in Tbilisi and in Batumi and Kutaisi. On the company’s website noted that the iPhone+ today is one of the largest Resellers of Apple products in the region. According to the video, shop iPhone+ has become an official partner of the American Corporation in January 2016.

Blogger OnLeaks together with the designers uSwitch has created a video demonstration of drawings, in which allegedly depicted the iPhone 7 and iPhone 7 Plus. If you believe the images, Apple refused to smart phones from 3.5 mm audio Jack for connecting headphones. Now users will have to use a Bluetooth interface or the connector […]

If any future for 3D Touch?

Introducing the iPhone 6s and iPhone 6s Plus, Apple called 3D Touch – the main function of new devices. Users have a new way of interacting with the operating system by clicking on the display with force. This technology Apple has dedicated a four-minute video, which described in detail the principles of its operation. Even […]