The new iOS version 9.3.2, as promised the developers, Apple should be working on the bugs, and improve the performance of the devices. Resource iAppleBytes decided to test it and compare the speed of iOS beta 1 and 9.3.2 9.3.1 iOS on supported generations of smartphones, including iPhone 6, iPhone 5s and iPhone 4s. Note that some users complain about the instability of the test version of iOS, but what firmware version is faster – demonstrated on video. 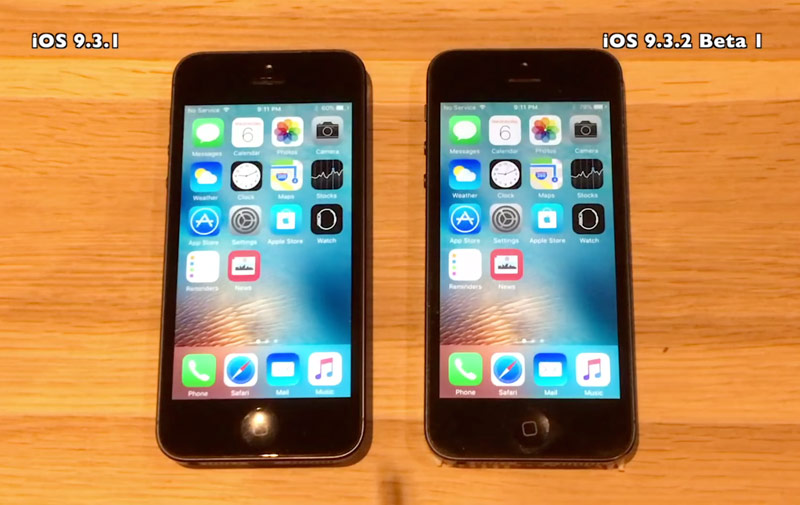 The test showed that, contrary to the promises Apple iPhone 4s iOS 9.3.2 performs slightly slower iOS 9.3.1. This manifests itself in on-time smartphone and the speed of launching applications. If we take other devices – iPhone 5s and iPhone 6, here new firmware showed a good side: even at the testing stage, it bypasses the stable version of the operating system. Firmware on both devices show comparable results in the benchmark.

Will be interesting to see how the situation will be after the release of the final iOS version 9.3.2. Currently available the first beta version.

Last year Motorola introduced the Droid smartphone Turbo 2, which is within a couple of weeks before the announcement was advertised as the world’s first phone with an unbreakable display. Today Motorola has released two promotional videos in which he compared the heavy-duty screen of her smartphone with displays of competitors — the iPhone 6s […]

SanDisk began selling in Russia USB stick new generation iXpand V2 is designed for users of the iPhone, iPad and iPod touch. New product designed specifically for data transfer and memory expansion on the Apple devices, providing up to 128GB of additional space. iXpand V2 is different from its predecessor design, support for USB 3.0 […]

How to create Memoji on iPhone X

One of the major innovations of iOS 12 — the emergence of personalized Animoji. Now everyone can feel like Kim Kardashian. Edition MacDigger says how to create your animated smiley. Memoji will only appear in iOS 12. A new version of the operating system will be released in the fall of 2018. Until the official […]